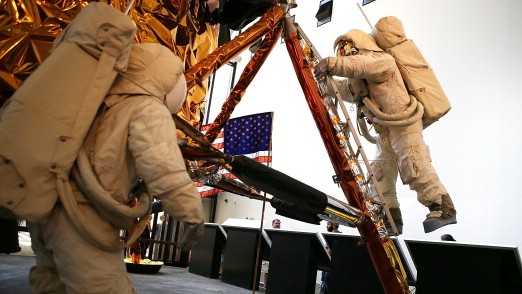 Yesterday I came down a little bit hard on Discovery Channel after it announced its creepy-sounding new show Survival Live, but today I’m here to make amends. Discovery and Science channels are planning a live broadcast of a moon landing by the tail end of 2015. Nobody dies, because its star is a robot. The Google Lunar X Prize competition will pit privately funded teams against each other in a race to put an unmanned craft on the lunar surface, travel 500 meters, and capture and transmit videos and photos along the way. The combined prize is a brain-warping, record-breaking $30 million, with $20 million of the pot given to the winner.

The networks will air a miniseries of the teams testing their moon bots, and follow them through liftoff and landing. It’s been a long time coming: In 2007, X Prize founder Peter Diamandis optimistically predicted the competition would be complete by 2012. Frustrated by the U.S. government’s lack of expedience when it comes to moon races, Diamandis and Google looked to ambitious entrepreneurs instead, hoping to inspire the private sector to make their own damn space ships on their own damn time.

In 2004, the Ansari X Prize was won by the adorable, star-spangled SpaceShipOne, marking the first privately funded manned spaceflight in history. Its format was inspired by the Orteig Prize, which Charles Lindbergh won in 1927 for flying from New York to Paris nonstop. Lindbergh received $25,000, and the feat created a new interest in aviation known as the “Lindbergh boom.” In a 1927 interview with Popular Mechanics, Lindbergh predicted that “The planes used [for commercial flights] will be increased in size according to the demand. Dining compartments, sleeping berths and other similar improvements already have been proved practicable, and will be put into regular use in the United States as soon as the public wishes them. Judging from the constant increase of interest and enthusiasm, that time is not very far ahead.” Now that flying from one earthly location to another is no longer exciting — actually, it sucks, and instead of sleeping berths we knock knees with strangers eating stinky burgers centimeters from our bodies — it’s time to get jazzed on conquering outer space vacations, so that they, too, can become commonplace and suck. It’s all thrills and dining compartments until someone confiscates your face wash.

There’s something honest and appealing about the prospect of watching a robot explore space while its commanding humans are safely earthbound. In comparison to Virgin Galactic’s bitcoin-rich passenger vehicle SpaceShipTwo (based on SpaceShipOne’s model), watching a non-human explorer report on its extraterrestrial findings is all-inclusive. Everyone watching will experience the event in the same way (well, maybe the teams who just won several million dollars will have a somewhat enhanced reaction): safely and inexpensively. Earlier this year, Richard Branson reiterated his plans to launch his first passenger-equipped flight in 2014, but as one does with any crazy scheme, he’s known to push back his deadlines (and has been accused of “boasting” for sticking to his promises, some of which never come to fruition — like when he swore Virgin Cola would squash Coke).

So where will you be for the new moon landing? I know where I’m going to sit: over here with the original moon-landing deniers, watching Room 237 and keeping my eyes peeled for discrepancies in previously captured crater shots. And don’t worry if you’re too late to the party to compete, because you can cobble together your own spacecraft from home and sell it on Etsy. You may not get $30 million, but you might be able to score like $3,500, even if your creation is filled with scorpions. Just add googly eyes for your Googly X Prize play-at-home championship title.

Zac Efron Is Producing and Starring in a John Grisham Thriller