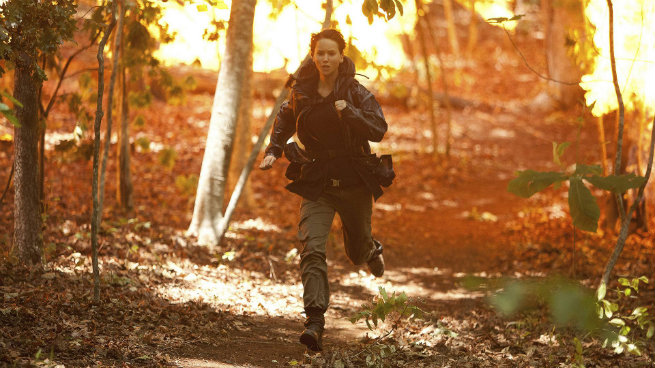 Discovery Channel, which seems to be on a recent mission to try everything it can think up to spike your blood pressure, revealed the concept for its upcoming reality program Survival Live yesterday via The Hollywood Reporter: Eight people, all of them skilled survivalists, will be plopped into the wilderness (likely somewhere in the Pacific Rim) and broadcast into our homes twice per week, with one prerecorded and one live elimination episode. Sure: Survivor meets Big Brother, I dig. But something about this show is already drawing comparisons to The Hunger Games (and, by extension, The Running Man), minus the threat of mortal combat — though nobody’s explicitly promising that won’t happen. Pass me an Ativan, tell me whether we should take the road to Co-Op City or Panem, and let’s unpack this.

Discovery has dubbed Survival Live “the first-ever live broadcast survival show,” and in a longer synopsis on Entertainment Weekly, the network called it a “24/7 real time, multi-platform viewing experience where viewers will play a large role in each survivalist’s success or failure. The survivalists struggle will be streamed live, day and night, from the moment they are abandoned into the remote wilderness with only the clothes on their back. Viewers will have the ability to check out the survivalists biometric data to see who is physically struggling, and can elect to help them out. The survivalists will be able to build a relationship with the audience by talking to them through the cameras. That relationship could be the difference between failing to succeed on the first week or making it the full 42 days. To prosper, these survivalists will need the audience in their corner if they want to stay alive.” The final sentence of that release is so ominous, it seemed to indicate that this whole thing was an April Fools’ joke; I’m still not entirely sure it isn’t, because I’m pretty sure we were just informed by Discovery that we — the hypothetical audience — are actually responsible for keeping these reality show contestants alive.

So far, there has been no mention of a prize. Even the winners in The Hunger Games got houses in Victors’ Village and unlimited food; in The Running Man, there was $100 an hour with additional bonuses and a 30-day survival jackpot of $1 billion. If there is no reward, or if it’s insubstantial enough to not bear mentioning until the premiere, that means it’s going to appeal to the kind of people who would face the elements gladly because they’re so eager to prove their skills (a pursuit that never ends in disaster, as we well know by now). And they’ll have to prove many: Not only must they make fire, find food, and go out searching for the nearest source of fresh water, they’re going to have to gain our sympathy so we will in turn allow them access to things like food and personal care items. The “biometric data” will, one can assume, allow us to see who is in dire need of water, who has lost the greatest amount of weight, and who is having a Lisa Whelchel–style emotional breakdown and really, really needs a hug. You will sit in your warm bed, in your temperature-controlled home, eating a bowl of Fritos with the works, and you will deny her a hug because she has not worked hard enough to make you like her. I repeat: These survivalists will need the audience in their corner if they want to stay alive.

Perhaps that last part is hyperbole, but this still feels like a huge responsibility to take on as a person watching television — or even a person who decides not to watch television, as a conscientious objection to this format. By not watching, you’re as bad as the guy on Survivor who eats all the doughnuts instead of giving them to the rest of the tribe, except now there’s the prospect that because they won’t eat the doughnuts they may not live to ever eat a doughnut again. By not monitoring biometrics, you are eliminating the possibility of helping people who are getting eaten by giant tropical insects and haven’t showered in many days, possibly as many as 42. Just by existing, the show has made you, however passively, complicit in whatever befalls the survivalists.

It’s thrilling television, but mostly because it has been allowed to march through the gates of existing at all. If you’re a network that wants viewer participation through social media, this is probably the way to get it. The Big Brother house, the 24/7 goings-on of which are live-streamed, may not be a place most people would like to find themselves isolated, but at least there are sofas and a refrigerator. The power dynamics are controlled by the house members, not voyeurs. Big Brother is somewhat retro — a lot like Josh Harris’s ’90s social experiment Quiet: We Live in Public, or an all-access version of Real World — and so are competitive survival shows (like Sweden’s Expedition Robinson, the analogue version of Survivor), but combining real-time monitoring, audience interaction with this level of control, and a wilderness landscape is certainly a formula we haven’t seen before. It comes from the future — you know, 2025, where we’re running around with Arnold and a glass of water costs $45.

When discussing this idea with one of our editors, I mentioned that this show was essentially pitching itself as the one with the highest likelihood of someone dying. Checking the Internet for signs of a cast member “physically struggling,” because “viewers play a large role” in determining who gets to eat that day is just a little much. You would think that anyone who’s read a dystopian science-fiction novel would have decided that it was safer to gamble with a contestant’s love life, sex life, financial security, post-reality-show endorsement career — anything other than their actual biometric ability to keep their hearts beating and their poor mortal vessels from eating themselves. But no. Welcome to the future! Now you all have the opportunity (or maybe responsibility) to go put your half-baked, more humane reality pitches back in the oven and try to save us from this powerful vacuum of potential wreckage. May I suggest Who Gets the Puppy?, Last Slice of Pie for Auction or Can Anyone Resist Antonia?. Just come up with something. Literally anything. I don’t want to see us all standing in a dusty courtyard dressed in rags, holding up the sign of the Mockingjay because nobody sent Brian a bagel, and now he’s gone.

Grantland Recommends: ‘Enlisted,’ ‘Review,’ ‘My Lunches With Orson,’ and More

The Charles Dance Menace-O-Meter: Rating the 'Game of Thrones' Patriarch's Most Intimidating Roles