The Charles Dance Menace-O-Meter: Rating the ‘Game of Thrones’ Patriarch’s Most Intimidating Roles 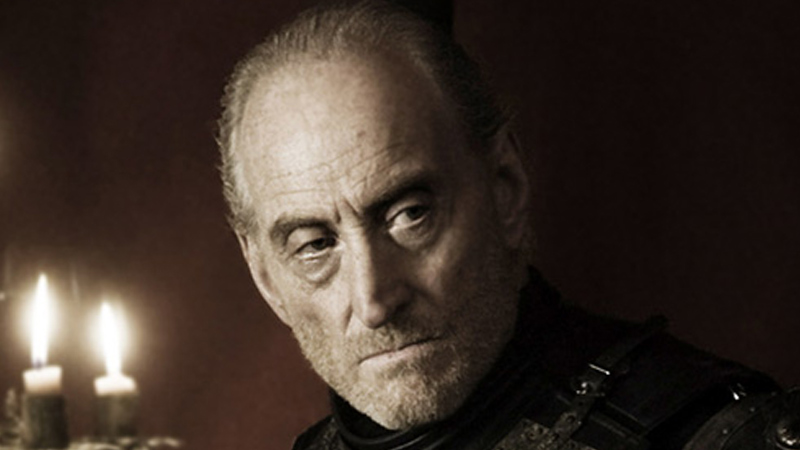 Note: This article contains spoilers about the past three seasons of Game of Thrones as well as several films that have been available for public consumption for years. Also, the writer hasn’t read any of the books that Game of Thrones is based on, so if Tywin Lannister is lit on fire by a grumpkin (whatever that is) in the first episode of Season 4, then we’ll all have a big laugh about this story on Sunday night.

Over the past three seasons of Game of Thrones, Lord Tywin Lannister has never been shown beheading anybody or ripping a single throat out. When he made his onscreen debut skinning an elk, he stayed impeccable in a black leather ensemble that wouldn’t have been out of place on Jay Z and Kanye’s Watch the Throne tour. Still, he’s possibly the most terrifying character on the series, ranking above the executioner who had his tongue cut out and the sociopath who spent all of last season delighting in a prolonged torture experiment (with Theon’s penis).

Even in his current desk-jockey position as the Hand of the King, Tywin methodically plans a massacre via letter-writing campaign and coldly devises arranged marriages for his children — whom he totally hates and barely puts up with — to secure the family’s control of the country. In fact, sitting down at a table with Tywin to try to get him to see things your way was the worst decision you could make in Season 3, with the possible exception of impregnating someone you weren’t supposed to marry while in the middle of a war with Tywin Lannister.

Of course, a crucial component of Tywin’s rise as a supervillain is the masterful performance of veteran actor Charles Dance. Check out the scene in last season’s finale when the Small Council learns that Tywin’s plan to kill Robb Stark and his mother was successful. Tywin should be chest-bumping Grand Maester Pycelle and diving into the adoring arms of the fans behind the end zone, but instead he’s taciturn until he coldly dismisses the increasingly unhinged and insolent King Joffrey for the brat that he is.

Dance has spent decades playing all manners of tyrants, harsh dad figures, and assholes — his roots are in British television from the 1970s and early 1980s — but Tywin may be his best one yet. To see how he matches up, check out the Charles Dance Menace-O-Meter, a look at some of the actor’s roles through the years and all the fantastic ways he has made you hate him, but also made you think he’s awesome.

What Is It? A midlevel Eddie Murphy action-adventure flick that’s the Southern California sibling to Big Trouble in Little China — there’s even significant cast crossover.

Who Does He Play? Sardo Numspa, a dandy in elaborate neckwear and a full-length leather coat that he wears like a cape. This whole caper starts when he kidnaps a magical Tibetan child destined to bring compassion to the world.

Most Terrifying Moment: Numspa and his motley crew of grunting lunatics invade Murphy’s dream that’s being taped in front of a live studio audience. Sweet brother Numspa is unfazed by Murphy’s zingers about his “Morris Day jacket,” and only a true demon could resist such snappy repartee.

How Menacing Is He? Eight out of 10 soul-chilling glares.

What Is It? The first installment of the Alien saga that people were not psyched about when it was released. Over time — because of general David Fincher adoration, the backstory of studio tampering, and a director’s cut — now people are kind of into it.

Who Does He Play? Clemens, the prison planet’s doctor. Also, the first and only character in the series to bed Ripley.

Most Terrifying Moment: The Newt autopsy scene — even though he does it at Ripley’s request, no one comes off well when examining the dead body of a child.

What Is It? The meta-action-movie satire that was Arnold Schwarzenegger’s first flop and helped derail the careers of director John McTiernan and writer Shane Black. After its 20th anniversary last year, at least one critic called for its reevaluation.

Who Does He Play? Benedict, an ambitious evil henchman with an arsenal of glass eyes. He spends the film in dapper white suits and is maybe the first mainstream movie villain with neck tattoos, proving that the younger, red-bearded Dance could also be kind of a stud. Supposedly, Alan Rickman turned down the role and Timothy Dalton backed out of it.

Most Terrifying Moment: Dance leads a home invasion involving Schwarzenegger’s teenage daughter and surrogate son, which starts off pretty brutally before devolving into the purposefully cartoonish violence of the rest of the movie.

Biggest Dick Move: Shooting a random New York City auto mechanic just to test his theory that no one in the cold-hearted city will give a damn.

How Menacing Is He? Seven out of 10 soul-chilling glares, but points deducted for an overblown speech about bringing cinema’s greatest villains to the real world during the climactic conflict.

What Is It? A Hitchcock-indebted thriller about the culture/personality clashes between an older mystery writer (played by Charlotte Rampling) and a sexually voracious young woman (played by Ludivine Sagnier). Checking it out will make Netflix start recommending other Steamy French Movies for your queue. (OK, checking out both Swimming Pool and Blue Is the Warmest Color will make this happen.)

Who Does He Play? John Bosload, a book agent who suggests that Rampling’s character visit his vacation home in France to get inspiration, but doesn’t tell her that his daughter from an affair might be stopping by to leave dirty dishes on the kitchen table and bring home a new conquest every night. It’s also a rare modern beardless performance by Dance.

How Menacing Is He? Four out of 10 soul-chilling glares.

What Is It? A stony swords-and-monsters comedy that was released less than 10 days before Season 1 of Game of Thrones premiered.

Who Does He Play? King Tallious, another often-disappointed father in armor, but this time he also wears a ridiculous wig.

Most Terrifying Moment: There’s a brief sequence in which he wields a crossbow, but considering what King Joffrey does with this same weapon in Game of Thrones, it’s not so bad.

Biggest Dick Move: Ruining Danny McBride’s troll weed high and forcing him to go on a quest with his brother or face banishment.

What Is It? The reason to get stoked for quality Sunday-night television again after an HBO drought of four whole weeks!

Who Does He Play? Lord Tywin Lannister, the patriarch of the Lannister clan, the richest man in Westeros, and probably the most powerful human on the show.

Most Terrifying Moment: In Season 1, Tywin’s constantly seething fury boils over for the first time after learning that his son Jamie has been taken hostage by the Starks. Don’t worry, the explosion probably comes less out of fatherly concern than about what it means for his family’s name and that it puts him at a strategic disadvantage.

Biggest Dick Move: Dang, dude, where do you start? Let’s just go with Tywin telling his witty and cunning son Tyrion that his great act of fatherly compassion was when he didn’t drown Tyrion in the sea the day Tyrion was born because childbirth killed his wife.

How Menacing Is He? Nine out of 10 soul-chilling glares.

What Is It? The fourth installment of the Matrix-y vampires vs. werewolves saga. There are supposed to be lots of twists and intrigue to it, but this is the type of movie in which a character actually says that a government conspiracy “goes right to the top.” It’s a mess.

Who Does He Play? Thomas, the elder in charge of a vampire coven that’s been forced into hiding since the human-led “purge.”

Most Terrifying Moment: There’s some business where he does the slow circle around the daughter of Selene — the heroine at the center of the series — and tells her “I know exactly what you are,” but it’s pretty mild, especially since it’s been established that as a leader of vampires he’s pretty toothless [wah-wah]. Also, this is another beard-free performance from Dance, so maybe that’s where his power of menace lies.

Biggest Dick Move: Giving up Selene’s daughter to the Lycans to get them to stop slaughtering vampires. Weak.

What Is It? A liquor commercial that takes a tour through several decades of bar drinkers.

Who Does He Play? Barman and narrator.

Most Terrifying Moment: The way he pronounces “unusual.”

Biggest Dick Move: He’s supposed to be the exemplar of a stand-up guy, but I’m not discounting the possibility of a decades-long opiate addiction and an inability to stay in a committed relationship.

How Menacing Is He? Two out of 10 soul-chilling glares, just from residual character menace.

Eric Ducker (@EricDucker) is a writer and editor living in Los Angeles.