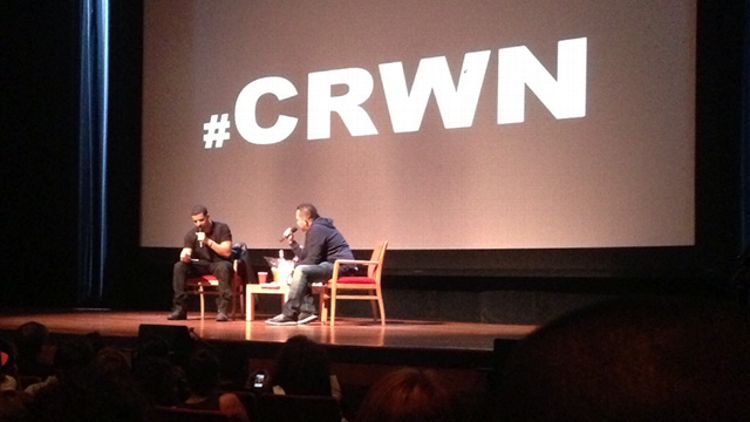 On Sunday night in NYU’s Skirball Center, Aubrey Drake Graham walked out onto a hashtagged-blessed stage to talk to Rap Radar‘s Elliott Wilson in the fifth installment of his town hall–like, State of the Rapper interview series (previous guests: Tyler, The Creator; Wale; J.Cole; Macklemore). On the surface, the idea of listening to someone interview a rapper for 90 minutes is a torturous premise. One can only handle so many layup questions and cliché-fueled answers.

But I went anyway. Because it’s Drake. And whether I liked it or not, I’m in too deep with this guy.

Over the course of the fireside chat (embers replaced with champagne, of course), Drake tackled most questions in an extremely transparent manner and gave details about his career and philosophy on life that even the casual fan would find interesting. A few:

Because Drake is such a big star and the man behind what is arguably the most important album of 2013’s fourth quarter, these facts alone are enough to fill a late-afternoon blog post. But something else happened during this talk, a minor tangent in the lengthy discussion, that changed my entire relationship with the 26-year-old musician who I do not know.

When prompted by Wilson to talk about “Too Much,” the conversation quickly went to his recent Late Night With Jimmy Fallon performance.

Before the performance, Drake stated, “Before I do this song, I just want to say to my friends and family, I want the best for everybody. I love you all.” That disclaimer is what he wanted to take a moment to discuss at NYU. He was referencing some of the lyrics of his song, specifically the second verse:

Money got my whole family going backwards.
No dinners, no holidays, no nothing.
There’s issues at hand that we’re not discussing.
I did not sign up for this.
My uncle used to have all these things on his bucket list.
And now he’s acting like, oh, well, this is life, I guess, “Nah, fuck that shit.
Listen man, you can still do what you wanna do, you gotta trust that shit.”
Heard once that in dire times when you need a sign, that’s when they appear.
Guess since my text message didn’t resonate, I’ll just say it here.
Hate the fact my mom cooped up in her apartment, telling herself that she’s too sick to get dressed up and go do shit, like that’s true shit.
All my family from the M-Town that I’ve been ’round, started treating me like I’m “him” now.
Like we don’t know each other, we ain’t grow together, we just friends now.
Shit got me feeling pinned down, pick the pen up or put the pen down.
Writing to you from a distance like a pen pal, but we’ve been down.

The “more money, more problems” narrative isn’t new, but what does stand out in that verse are the two lines about his mother. Using the NYU stage as a venue to elaborate on that disclaimer, he took a moment to talk about his mother. And that’s when everything that Drake and I have changed.

It was the first time my mom was extremely upset. She was really upset with me. She was upset because she felt like it warranted a personal conversation before I went and said that in the song. And what I had to remind her of was that we had had this personal conversation many times over and I felt like it wasn’t going anywhere. It was sitting on my chest so heavy that one night when I had that second verse to finish, it was like a huge release. I don’t think I’ve ever felt anything like that before.

And then, after a brief break to discuss his willingness to call out in a song any woman he’s had any interaction with, he returned to his original topic of conversation:

I gave that disclaimer on TV because I knew my mother would be watching. And since I chose to communicate that message to her publicly, I also wanted to communicate another message to her publicly, which was that “I love you. I do. With all my heart. And I want the best for you. I didn’t mean to make the world think you’re some person that’s just hiding out, but at the end of the day, I want a lot more for my mother.” She’s 66, that scares me, man. I’m 26 years old. Life is not guaranteed, and does not last forever. I want her to start feeling better and get on a plane and go wherever she wants to go. And see as much of the world. And come to the #CRWNs and come to the first concerts. My mom doesn’t do that. She stays where she’s at.

I made that disclaimer because I felt partly guilty and because I wanted her to know how much I love her in front of the whole world.

Some of my deepest friendships have begun with a moment in a conversation that feels like looking into a mirror — those rare moments when your own thoughts are seemingly incepted out of your brain and articulated with someone else’s mouth. That’s what happened in that room, as I sat there, frozen, covered in chills. It was clear that my relationship with Aubrey couldn’t go back to where it was before he told that story. I love hip-hop more than most things, but I can list the rappers with whom I’ve developed very real connections on one hand, from just one verse.

Cool is how I played the tenth grade
I thought it was all about mackin hoes and wearin pimp fade
Instead of bein in class, I’d rather be up in some ass
Not thinkin about them six courses that I need to pass
Graduation rolled around like rolly-pollies
Damn, that’s fucked up. I shoulda listened when my mama told me
That, if you play now, you gonna suffer later
Figured she was talkin yang yang, so I payed her no attention
And kept missin the point she tried to poke me with
The doper that I get, the more I’m feelin broke and shit
Huh, but that don’t matter though, I am an O-UT-KAST
So get up off your ass.

As we knelt on the kitchen floor
I said mommy I’mma love you till you don’t hurt no more
And when I’m older, you ain’t gotta work no more
And I’mma get you that mansion that we couldn’t afford
See you’re unbreakable, unmistakable
Highly capable, lady that’s makin’ loot
A livin’ legend, too, just look at what heaven do
Send us an angel, and I thank you

Mothers and sons often have very deep, complicated, mutually protective relationships, which are only intensified when the boy is an only child and the woman is a single mother. Andre Benjamin, Kanye West, Aubrey Drake Graham: All three men fit the bill, a fraternal order of which I, too, am a member.

I’ve seen parallels between Drake and myself for a long time. We’re the same age, we both love our longtime guy friends and our hometowns over everything else. But at the end of the day, I knew he was a superstar loverboy crooner-rapper paranoid-texter millionaire, and I was a writer who often found myself mocking his very existence, because it’s a very, very easy way to get laughs.

Toward the end of the talk, discussing his reputation as being the most emotional of them all, he said, “If I didn’t write about my life, then what the fuck else would I write about?” A week ago, or even 24 hours ago, I could have easily run with “this is the Drakiest way to answer a question about being Drake.”

After hearing him say it, after his story, I was forced to shake my head in agreement. Because, for some of us, that’s the only speed we know.

Filed Under: Andre 3000, Drake, Kanye West, We Went there