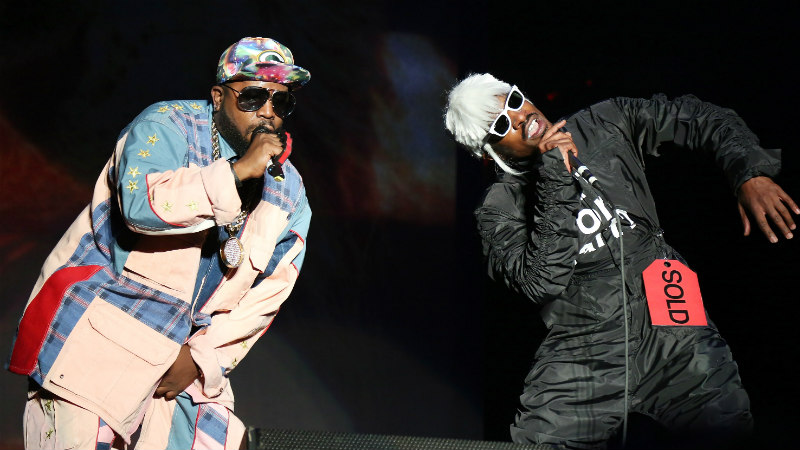 Typically not the most confrontational person, I’ve had a handful of uncharacteristically gully encounters with people closely associated with rap duo Outkast and their worldwide 20th anniversary reunion tour. Each time I’ve gotten like this, whether I’m cornering a photographer, a manager, or a publicist, it has revolved around one issue: When are they playing in Atlanta? Not will they play in Atlanta, but when. Even when — to my face — I was told, “They’re not playing in Atlanta,” I responded with delusion and selective hearing: “No, but they have to play in Atlanta, so when, just tell me when.”

April’s CounterPoint Music Festival, which Outkast headlined, was oft-touted as the “Atlanta Homecoming Show.” But for many people, playing in a field 70 miles north of the city at an EDM-heavy festival sat about as well as the 2017 new-look Cobb County Braves baseball team. Still, because Outkast is Atlanta and Atlanta is Outkast, fans made the exodus to Kingston Downs, Georgia, to witness what appeared to be, potentially, the last Outkast show in “Atlanta.”

And then a cryptic event took place yesterday. A full-page, front-of-book ad was taken out in Atlanta’s Creative Loafing newspaper.

It’s a spaceship, beaming down a light on the silhouette of two men — one of whom appears to be wearing some form of straw hat — in front of a silhouette of the Atlanta skyline, all under the hashtag title #ATLast, accompanied by a date: September 27, 2014. There was no confusion about who this was, but two immediate questions accompanied the news: What was it? And was it real?

When multiple Loafing staffers alerted the Internet that a surprise (even to them) had popped up in their own paper, immediate buzz materialized about the landmark event that was previously allegedly never supposed to happen. Friends started calling me, but I ignored many of them because I was trying to call other people, pleading to find out if this was real or someone punking the entire Outkast fan base (as well as the city of Atlanta), which was nowhere outside the realm of possibility.

The entire day went by with high hopes, but also the need to severely manage expectations. Until early this morning, when the truth finally came out in a statement from the group. “Coming from Atlanta gave us the freedom to be whatever we ever wanted to be because no one was paying attention,” Andre 3000 said. “Now that everyone is, we want to say thank you.”

Outkast are actually coming home. And not only are they playing, but they’re also curating a one-day festival in Atlanta’s Centennial Olympic Park that they’ll headline. Guests will be announced in the coming weeks, but for now all that matters is Outkast, in Atlanta. So much has been made, positively and negatively, about the crowds at each festival stop for Outkast, some being wildly invested and others not seeming to understand the significance of the group beyond “Hey Ya.” But this is the show people were visualizing when the reunion was first announced. The homecoming show. The Fade to Black–Stank show.

It’s not their last show, and it may not be their most high-profile, widely covered show, but it will be their most important show. Because it’s the show that validates this entire 40-stop tour’s existence.

Reimagine Dragons: The Grimly Handsome ‘How to Train Your Dragon 2’