A Brief Guide to Band Name Punctuation, from Mötley Crüe to !!! 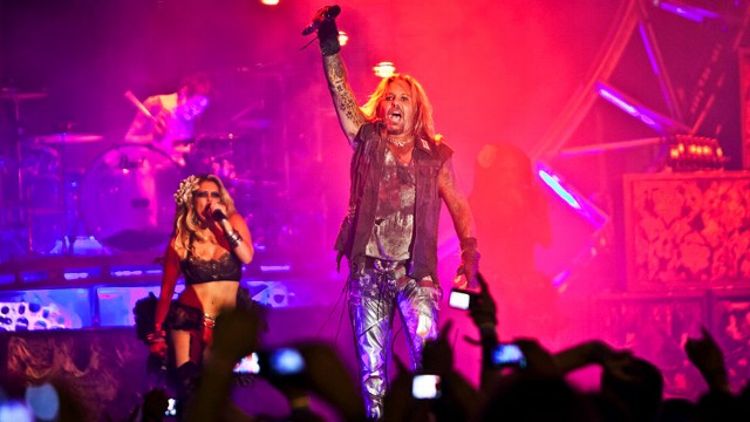 This week, Welsh rockers Attack! Attack! dropped their new album Blood On My Hands. Naturally, this got me thinking about Attack! Attack!’s soaring harmonies the rolling hills of Wales bands and musicians who have punctuation in their names. This is a well-trod field of study, yet one that remains explosively divisive; for many fans, the mere sight of a misplaced period or a superfluous exclamation mark is reason enough to dismiss the entirety of the act’s musical output, sound unheard. So what’s a fledgling band — one that’s maybe looking to set itself apart from the bland multitudes with a little creative punctuation — to do? Consult our useful guide to the DOs and DON’Ts of band name punctuation, of course. (WARNING: I have a very poor grasp of what, specifically, constitutes punctuation.)

Let’s get an easy one out of the way: umlauts, always cool. Motörhead, Blue Öyster Cult, Mötley Crüe — all totally rad. The problem is that it dates you. Is your band going for a retro, unwashed rocker feel? Umlaut away. Trying to be a more groundbreaking, forward-thinking outfit? The umlaut might not be right for you.

When a band like Sigur Rós (“Victory Rose,” in English) slaps that accent on, it’s just practical: As with basically every word in Icelandic (I assume, based entirely on Sigur Rós album titles), “Rós” already had an accent. Sure, it adds a touch of exoticism, but that’s neutralized by the unhip practicality. (There’s a reason I didn’t shout out Björk above). A wash.

It’s always the worst. Always! Do you know why people hate will.i.am? It is not because of his music, which, yes, is cravenly, soul-crushingly contrived in a way that probably makes even people who make the generic rock music played during chase scenes in procedurals feel ill. [Ed. note — It’s totally about his music.] It is because of the dumb, dumb way he spells his name. Your mother gave you a perfectly good name, will.i.am. She named you William. By the way, will might be too famous to change — but it’s not too late for you, apl.de.ap.

I don’t have proof, but I feel like this was heavily the domain of nu-metal bands? KoЯn definitely did it. It wasn’t a good look. EMINƎM does it too, but he is of course beyond good enough at rapping for us to pretend like he doesn’t. Side note: Nu metal was often stylized as nü-metal, a disgrace to the good name of the umlaut.

Now here’s where we get into a gray area. (Starting with: Are dollar signs even punctuation? I don’t think so? Let’s ignore that though!) The knee-jerk reaction to a dollar sign is immediate scoffing. “Ke$ha’s the worst! She’s got a dollar sign in her name!” Etc. The truth, though, is that done properly, with enough swag, it can be pulled off. Ma$e pulled it off for a while (seriously), even though I think he eventually dropped it. A$AP Rocky and his cronies are pulling it off as we speak.

Highly underrated. You know how David Foster Wallace explained his footnote obsession as being a way to break up a linear structure without totally doing away with good ol’ coherence? Apostrophes in names are basically the same thing. Guns N’ Roses’ usage is actually fairly justified grammatically, so a better example is Cam’ron. The guy’s real name is Cameron, but, clearly, that was not special enough. On a side note, have you heard “Oh Boy” recently? I mean, new music could basically have stopped being made after that one and I would have been cool with it.

Great and clever, but limiting — you’re basically deciding you want to play off the word “question” in some way. This worked out pretty well for both ?uestlove and ? and the Mysterians, of course.

Certainly the most overlooked punctuation element, and understandably. How much attention have you ever paid to the marks in At the Drive-In or Jay-Z? They’re just sort of there. A notable exception is The-Dream, who has cleverly used the dash to up his SEO potential. For example: If you just Google “The Dream” instead of “The-Dream,” you also get “SONYMA’s Achieving the Dream Mortgage Program.”

This is the dollar sign’s sister mark in that it’s also easily ridiculed, and often rightfully so: From Los Campesinos! to The Go! Team, to Panic! At the Disco, the exclamation mark often feels cheap and blunt. (Side note: Panic! At the Disco once dropped the exclamation mark, explaining, “We wrote it that way once, when we first started the band, and then … people kept writing it that way, and it was a freakin’ whirlwind.” As far as I can tell, it’s back now.) But done right, it’s perfection. Godspeed You! Black Emperor is a pretty good example of the outlandish ridiculousness of the band name almost burying the exclamation mark. But the greatest example is, of course, dance-punk titans !!! (pronounced chk-chk-chk. But you knew that already).

Werner Herzog once said this amazing thing: “I’m now doing a film with death-row inmates, and as a general umbrella title, I thought about Gazing Into the Abyss, and then I thought that would have been a fine title for the cave film. It fits for almost every film I’ve made. Bad Lieutenant, Aguirre, you just name it.” What I’m saying is, sometimes I feel like any band that has guitars in it should be named !!!