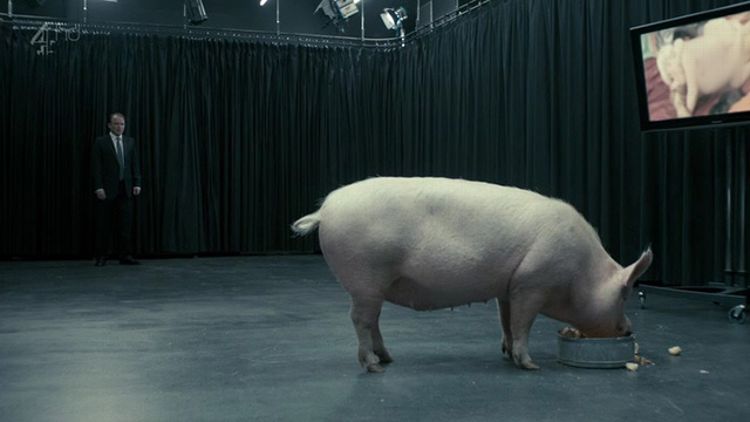 I have given myself the unenviable task of encouraging you to watch the U.K. series Black Mirror, which makes its long-awaited legal-platform debut on DirecTV’s Audience network. (If you don’t have DirecTV and are interested in watching it, I’m sure you can or have already found a way around that.*) The show originally debuted last year on Channel 4 to glowing reviews and at least one cross-pond Hollywood development deal. It’s not an unenviable task because it’s hard to recommend; Black Mirror is without a doubt the best television show I’ve seen this year (followed closely by a tardy viewing of the 2011 meta-anime Puella Magi Madoka Magica and I guess Breaking Bad or something as a distant third). I’m just deathly afraid of spoiling anything about it; when I flew to England** earlier this year to check it out, I went in knowing next to nothing, and nearly every episode left me with my jaw on the ground, throwing couch cushions on the floor and yelling “WHAT! WHAT! WHAT!” I want that experience for you, too, dear reader!

So here are a few facts I’ve rounded up that will hopefully convince you to check out this show, without giving away too much about what actually happens on it. Set your DVRs/book that plane ticket posthaste!

*Flying to England
** I didn’t really fly to England

The Twilight Zone Comparisons Are Apt

Each episode is a self-contained story, but rather than spinning spooky/paranormal scenarios, each Black Mirror episode is exceedingly plausible, given another five to 30 years. The series was created by British writer, broadcaster, and satirist Charlie Brooker, who has said of the show’s six episodes “they’re all about the way we live now — and the way we might be living in 10 minutes’ time if we’re clumsy.” Brooker’s favorite hobby horses for a while now have been the tech world and reality TV, so many of the episodes center around speculative technologies and the nature of what entertains us. And the increasingly blurry line between what entertains us and who we want to govern — I’ve said too much.

Yes, There Are Only Six Episodes

Divided between two “seasons.” LOL, Britain. (You are going to wish there were more.)

Robert Downey Jr. Is a Fan

If such an endorsement matters to you, you may be interested to know that Iron Man has bought the rights to the third episode, “The Entire History of You,” and is developing it into a movie. “The Entire History of You” is great and scary and queasy-making (not to mention probably the most currently relevant) and would make for a great feature film, as would most of the episodes. (Though I have to say that one thing that makes the series so effective is its nature as an omnibus, a collection of paranoid sci-fi musings that all indirectly comment on one another.) But it’s not even the most fucked-up episode of Black Mirror! (That would probably be “Be Right Back” or “Fifteen Million Merits.” Or tonight’s series premiere “The National Anthem,” depending on what gets your goat. Or pig. I’ve said too much.)

You Will Want to Talk About Every Episode With Everybody

This is a really fun show to watch with other people — it can be horrifyingly funny at times and more than a few episodes will require a full, investigative “What just happened?” recap conversation. I tend to be of the opinion that recap culture has diminishing returns, but you won’t be talking about plot and the direction of the series after each episode. You’ll be talking about social media and bio-invasive technology and fame and I’ve said too much.

It Isn’t a Depressing Drama About a Flawed Male Antihero

It’s a terrifying and exhilarating speculative half-fiction about a flawed society! I’ve said too much.