21 & Over: Ain’t No Party Like a Disappointing, Binge-Drinking, Vomiting-on-a-Mechanical-Bull Party 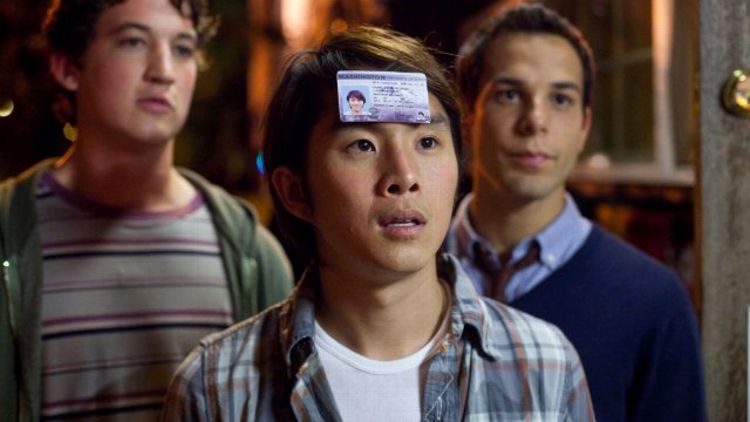 The sense of comedic escalation in 21 & Over is inversely proportional to it actually being funny. This is a party movie that, like a Harold & Kumar film, is out in search of the party. Here the stakes seem small. Two college seniors named Miller and Casey (Miles Teller and Skylar Astin) surprise-visit their high school pal Jeff Chang (Justin Chon) to take him out for his 21st birthday. But Justin’s got a big med-school-related interview that his taskmaster father (François Chau) set up. The action in the script is possible only if these guys don’t know each other well enough to be surprised by the curveballs thrown at them, but their estrangement makes all the serious stuff that comes up later seem highly implausible.

They wind up going out anyway, and Jeff Chang (they call him by his full name) experiences great insobriety, passes out, and forces Miller and Casey to drag his unconscious self around town looking for his house in time for his father’s early-morning arrival. Before he passes out, a gleeful Jeff minces toward the bouncer at one bar, flicks his license, then disappears inside. He gets up on a bar and urinates on his fellow patrons. He projectile-vomits from the saddle of a mechanical bull.

You can see that Chon has put some thought into how to make this kid funny in a way that allows his being Asian American to be part of the joke (“Where the white girls at?” he yells upon entering one bar). He’s invented good physical comedy to make the character distinctive. But Chon also has a natural exuberance that the party sequences simply italicize. You could watch a whole movie of him sucking blue juice out of an obese guy’s navel or doing the robot on the roof a car. It’s a crime that his exuberance lasts for only a couple of extended montages and some nonsense toward the end.

Once Jeff passes out, the story in 21 & Over belongs to Miller and Casey. As much as no one should complain about spending time with Teller and Astin, who’s like Jesse Eisenberg drawn in a straight line, Chon is the guy with all of the movie’s new energy. Yet for most of the film, he’s stuck draped over his costars or slumped on a sofa like Terry Kaiser in Weekend at Bernie’s. He’s a prop.

Nonetheless, there’s a plot for Miller and Casey to advance and shtick to concoct — their attempt to find Jeff’s place, Miller’s uncouth insults, Casey’s attraction to a flavorless blonde (Sarah Wright) who so easily manages to appear at almost every location that you wonder whether a restraining order is called for. Not against her, per se, but for Jon Lucas and Scott Moore, who wrote Ghosts of Girlfriends Past, The Change-Up, two Hangover movies, and Four Christmases. They’ve simply stalked their own work in a way that also reminds you of other so-called stoopid comedies like Dude, Where’s My Car? and those Harold & Kumar farces. This is the first movie they’ve directed together. They’ve just cut out the middle man: It’s visually indistinguishable from the other films their scripts were turned into.

What’s frustrating about Lucas and Moore is that they’ve yet to ride their elevator pitch to the penthouse. 21 & Over leans on tired stuff like Miller and Casey breaking into a Latina sorority house and Miller paddling two blindfolded pledges (it’s one of their initiation rites), then commanding them to make out with each other, which they do with easy alacrity. Jeff eats a tampon and passes out again. Soon the two white guys are running from a gang of Latinas whose ranks swell to include an improbable couple of semi-cholas. When a different sorority takes them in, Miller says, “Thank God, you’re white!” The Latinas get their revenge when they make Miller and Casey kiss, but the boys find the prospect of going through with it so revolting that they’d rather be stamped with a hot iron brand. The movie traffics in generic gay panic, that being so proximate to men might result in homosexual feelings. But its best material actually involves three guys on a cheer squad, and it works because the jokes have a real target, however obvious — you recognize some truth in it. On the too-rare occasions that Lucas and Moore’s darts hit the board, satire is produced.

The joke of Jeff Chang is that he’s not an uptight, workaholic, premed nerd. Living up to that stereotype turns him into this darker, sadder, more troubled guy (a different stereotype) that the movie is too emotionally illiterate to handle. 21 & Over is more eager to traffic in non-innocent racial imagery like the stuffed tiger glued to Jeff’s crotch and a police chase sequence that lets him do some truly bad driving under the guise of his not having his contacts in. There will be entire theaters of people who’ll find that sequence hilarious because there’s some amusement in the lunacy that Chon uses to play it. There will be pockets of people in other theaters who’ll see an Asian guy plowing through parking meters, turning around to scream at his passengers, and careering off the road and suck their teeth. The Hangover movies lapped up the toothless ethnic menace and ambiguous sexuality of Ken Jeong, who at least served a narrative purpose. The car chase is kind of superfluous.

Lucas and Moore acknowledge the existence of race, but they don’t seem to grasp what about it is funny beyond the novelty of non-white people being something other than what white men assume them to be. That’s what made Seth MacFarlane so exasperating about women, brown people, and homosexuality last week at the Oscars: It’s like he’d never left his cave. It’s a kind of achievement that Lucas and Moore often devise movies that know there’s more to the world than straight white men. But if they’re going to continue to direct what they write, it would be refreshing to see them do more with that world than laugh at it.