The Reducer, Week 26: Ghosts of the Carling Cup 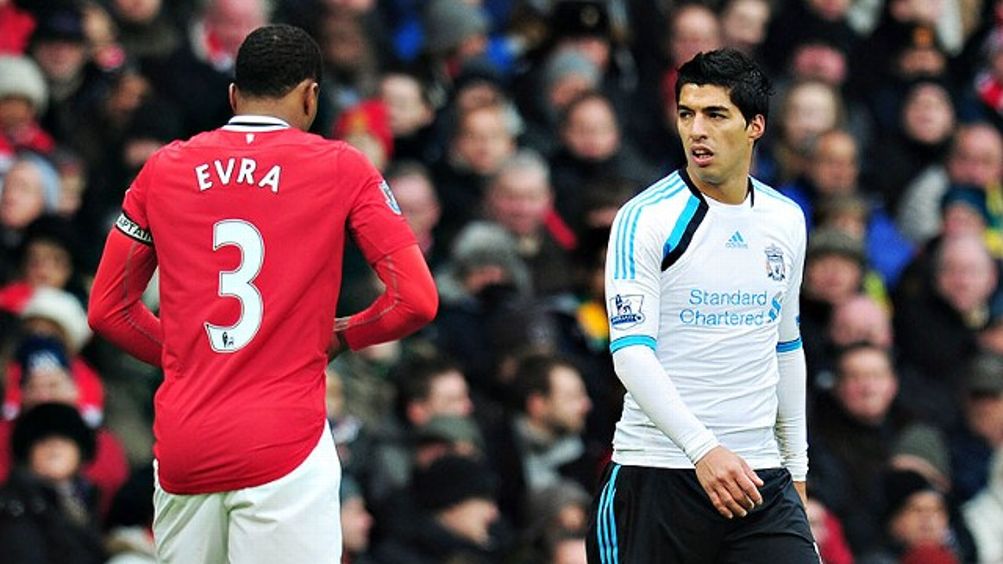 In England, there is the idea of the “Big Club.” There’s no algebraic equation that determines whether a club is “big” or not, but if there were it would read something like years in existence + number of trophies x stadium capacity + worldwide following . And going by that equation, or just simply the eye test, you would be right in saying that the two biggest clubs in English football history, Liverpool and Manchester United, played one another on Saturday.

United and Liverpool exude an aura of importance and permanence. Even when the results are not going their way, they manage to maintain their stature. It’s that aura that attracts new players to their locker rooms and new fans to their gates. But no matter how fixed clubs want their positions in the world of football, and in the hearts and minds of their supporters, they are still ultimately judged by the actions of those who represent them.

Suarez is very much the kind of player that makes supporters of whatever team he is playing for (formerly Ajax, now Liverpool and the Uruguay national side) say, “He might be a bastard, but he’s our bastard.” To see him feigning injury, diving, biting, fouling, and then pleading innocence to the referee or, most infamously, blocking an opponent’s shot on goal with his hand during a World Cup match, is to see a master of all the little things that can change the course of a match. These are the dark arts of football, and Suarez is a magician.

He also has magic at his feet. While injuries and exhaustion have limited his effectiveness for Liverpool this year, he is still one of the Premier League’s most dangerous attacking players. His season came to an abrupt halt in late December when the English FA banned him for eight games after he was found guilty of racially abusing Manchester United defender Patrice Evra during a match in October.

After the October match, when the accusations first started flying, and throughout both his public trial via the world football media and official FA-conducted investigation (if you don’t have time to read that one, here’s a shorter version), Liverpool unequivocally, some would say even blindly, stood by Suarez. Even after he was banned, his teammates wore T-shirts emblazoned with his image, out of support for the player. Throughout the ordeal, Liverpool manager Kenny Dalglish ardently defended his player, maintaining that the issue was one of a cultural misunderstanding rather than of racial abuse.

After serving his ban, Suarez returned to action last week against Tottenham. Moments after entering the game, he kicked Scott Parker in the stomach, seemingly unintentionally, though some would argue otherwise. He also gave Liverpool another dimension to their play, darting across wings, trying to get behind the Tottenham back line. All at once, we saw both the good and bad sides of the man and his magic.

Saturday we saw the worst side. Liverpool was playing United in the first league clash between the two since the October match when the Suarez-Evra incident occured. The ceremonial pre-match handshake, which involves smiling for cameras and players paired with children, was the subject of much debate beforehand. Would Suarez shake Evra’s hand? Would Evra offer his? Would a line be drawn under this regrettable incident?

Ferguson insisted his player would shake Suarez’s hand. Dalglish claimed Suarez would shake Evra’s. But when the moment came, Suarez appeared to skip by Evra on the line, enraging the Frenchman as well as his United teammate, Rio Ferdinand.

I can remember the details of the match about as well as I can remember the motivations of characters in The Hurt Locker. It hardly seemed to matter. Your attention was focused on the ticking bomb, not the people around it. Even though, on the whole, I’ve seen nastier Manchester United-Liverpool matches, few felt this tense. At halftime Suarez booted the ball toward the United bench, and while United keeper David de Gea was walking into the locker rooms, someone allegedly spat on him. It was a nasty and edgy game that United won, 2-1, Wayne Rooney scoring both for the Red Devils and Suarez netting Liverpool’s only goal.

Immediately following the final whistle, Evra began an extended victory lap celebration. Then, in talking to the media afterward, Ferguson launched into a scathing attack on Suarez and Liverpool, saying, “For a club with their history, I’d get rid of him, I really would. He is a disgrace to Liverpool Football Club. That player should not be allowed to play for Liverpool again. The history that club has got … and he does that today. It could have caused a riot.”

Initially, Dalglish stood by his player, practically incinerating a reporter who asked what he thought of Suarez avoiding the handshake, “‘I’ll have to take your word for it, I wasn’t there. Ask him, take it from him … I think you’re very severe and bang out of order to blame Luis Suarez for anything that happened here today. Both sets of fans behaved really well, there was banter between each other, no problem.”

A day later, Dalglish’s defiance would seem embarrassingly misguided. By Sunday, the club’s managing director, Ian Ayre, made a statement that was almost as strongly worded as Ferguson’s: “We are extremely disappointed Luis Suarez did not shake hands with Patrice Evra before yesterday’s game. The player had told us beforehand that he would, but then chose not to do so. He was wrong to mislead us and wrong not to offer his hand to Patrice Evra. He has not only let himself down, but also Kenny Dalglish, his teammates and the club.”

If you look around, you will still see some shouting out in defense of Suarez, claiming that Evra moved his hand. Some have suggested that Dalglish and and the team would still be standing behind his player were it not for the influence of Liverpool owners John Henry and Tom Werner, or Liverpool club sponsors Standard Chartered. It’s the money; it’s a conspiracy; it’s the media; it’s Ferguson.

No. It’s on Suarez. When I first became acquainted with Liverpool (and for the sake of transparency, when I first became a fan), I was overcome with how romantic the club was. Its history was full of triumphs and tragedy. It seemed to have a familial air to it, with the fans in the famous Kop End of Anfield singing, “You’ll Never Walk Alone.” You don’t have to be a Liverpool supporter to understand this romance. You only need to watch the below video, of A.C. Milan fans singing the Liverpool anthem, just days following the Hillsborough disaster, to understand the affection, empathy, and admiration this club engenders.

Like Barcelona, Liverpool seemed like more than a club to me. It was an idea about what a sporting institution could mean to a local and global community of fans.

When Suarez failed to grasp Evra’s hand, he failed to grasp what Liverpool means to people. To shake Evra’s hand would not have been a capitulation to Ferguson, to anti-Liverpool media bias, or anyone or anything else; it would have a been a statement that said, “What’s done is done.” It was simply the right thing to do.

Suarez failed to honor Kenny Dalglish, a man who helped lead the club out of the dark days following Hillsborough, who has been the beating heart of the club’s revival since Henry and Werner took over. And in that he failed to honor Liverpool itself. Often, as a player, Suarez behaves like a child, and he’s rewarded for it — with goals, with free kicks, with psychological advantages over his opponents. On Saturday, he needed to be a grown-up. He needed to repay the faith his manager, his teammates, and his club’s fans had put in him. He failed to do that. He looked small. And he brought Liverpool down to his level.

There was, believe it or not, plenty to praise and be excited about over this past weekend. Let’s take a quick run through the biggest results:

As goal after Spurs goal went sailing past Newcastle keeper Tim Krul, Tottenham manager Harry Redknapp became more and more visibly elated. This could have been because he was high on inhaling that freezing North London air, scented with the distinctive smell of “freedom.” Or it could have been that with every brilliant passing movement, with every elaborately constructed goal, the price the English FA will have to pay to get Redknapp to manage the national team in the summer’s Euro 2012 tournament went up just a little bit.

If the latter is true, I hope Newcastle boss Alan Pardew is getting a percentage of the profits. He set Newcastle up to play a suicidal, high defensive line, which Emmanuel Adebayor, Gareth Bale, and new Spurs signing Louis Saha dismantled with their physicality and speed.

In a weekend where the lustre came off some legends, it was nice to see one player have a fairy tale ending. Thierry Henry scored the second game-winner of his second (and likely final) stint at Arsenal, nudging in a fantastic Andrei Arshavin cross. I can’t decide which of Henry’s accomplishments is more impressive: Somehow getting Arsenal into fourth place or somehow making Arshavin look like a decent player again.

This was secretly the best match of the weekend. Week after week, the Canaries and the Swans prove that they belong in the Premier League, and on Saturday they played an excellent game. Special mention should go out to Swansea’s Danny Graham and Norwich’s Grant Holt. Both are new to the Premier League after spending time in England’s lower division. Players like this were not so rare in the years before the Premier League. These days it’s more common for promising players to be snatched up by bigger clubs in their teenage years, but Graham, 26, and Holt, 30, both have worked hard, scored goals, and bided their time in the lower leagues. It’s hard to have Cinderella stories in a league so dominated by cash flow, but Graham and Holt and their respective sides have been just that.

The Clint Administration! I really need to just push everything off of this column’s proverbial desk and write a prose poem about how incredibly well Clint Dempsey is playing this season. One of the announcers tried to say Dempsey’s goal was a bit lucky because Thomas Sorensen mishandled it. I think Sorensen’s just lucky to have a hand at all after that shot. Dempsey himself is rather lucky to still be walking after Wilson Palacios went in with a real two-guns-up tackle.

Mackie is another guy who rose through the leagues. He’s also lucky to still be playing the sport after suffering one of the more horrific leg breaks that you will ever not want to Google at all, especially not after you’ve eaten.

Quote of the Week: Roy Hodgson

On Wolves boss Mick McCarthy, following his West Brom side’s beatdown of McCarthy’s team: “I think he’s done an excellent job and continues to do an excellent job. I’m always saddened that those jobs don’t always get recognized. On the other hand I don’t want to appear naive. I know it’s part of the game nowadays and it doesn’t matter whether you’re God Almighty or Mick McCarthy, people are going to think there’s people out there who can do it better.”

McCarthy was fired on Sunday.