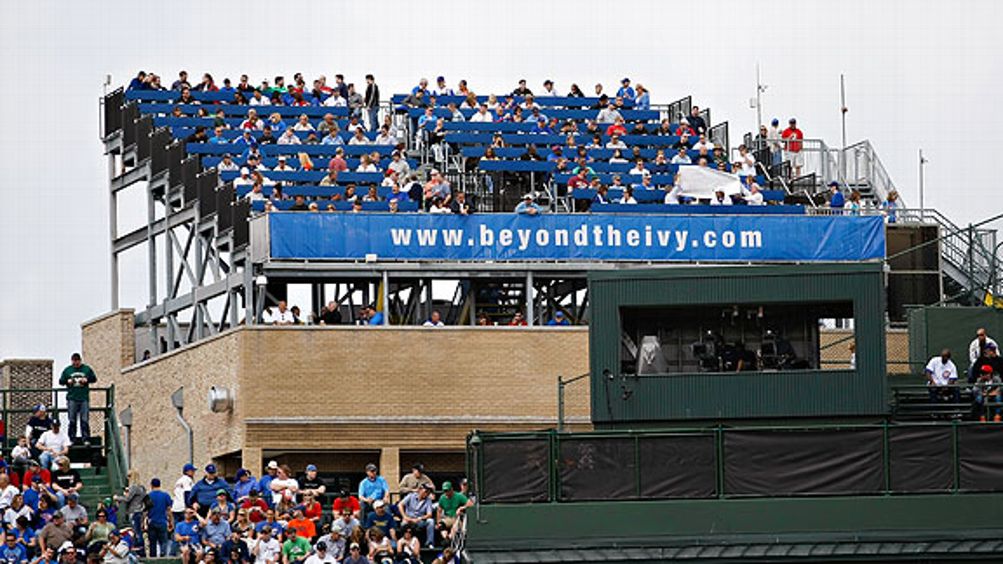 It was pretty cold for a Saturday in late May. It was about 50 degrees out, and everyone was wearing three layers. People had on their Cubs jackets, their Illinois jackets, their Northwestern jackets. A guy in front of me was wearing one of those psychoanalyst sweaters with the buttons and high collar, which I think is the official gear at the University of Chicago. Rain was likely any minute, and the Cubs were down 5-nothing in the fifth inning. We were having a blast, though, watching the game from deep left. Deep left. We weren’t even in the ballpark.

This was my first time in one of the establishments that ring Wrigley now, former residential buildings that have been converted to extensions of the stadium, with their own rooftop seats, concession stands, and quasi skyboxes. You might have heard about the Cubs’ ownership threatening to put up a screen of some kind, to prevent these places from charging people to watch for free. The various sides argued and threatened, and eventually they worked out some kind of revenue-sharing deal, and now everyone’s happy. Now there are about 1,000 people who watch the Cubs from across Sheffield and across Waveland. Even when the stadium isn’t full, the rooftops are. This says a lot about baseball in Wrigleyville.

We were at a place called Brixen Ivy, and yes, it pains me to type that pun as much as it pains you to read it. It’s just across Waveland, down the left-field line. From its location, you can get a vague sense of the action on the field, and every now and then you can even see the ball. If you squint, and lean forward just so, you can read the scoreboard. In this case, the Cubs were now down, 6-0.

Not that the score mattered much. I grew up with the Cubs, and I don’t remember the possibility of winning ever being high among the reasons we went to Wrigley. We went because the park was ragged and crumbling and lived-in, beautiful in an almost accidental way. The low brick wall behind home plate implied a game being played at the local elementary school. The ivy in the outfield hinted that the building was so old that nature was reclaiming it. We went for these reasons, and we went because the weather at Wrigley was always better there than anywhere else in Chicago. We went because you could pay $10 to park in someone’s driveway and $1 to use their bathroom after the game. Speaking of too much beer being drunk from cheap plastic cups, there was Harry Caray, too.

Winning, which the Cubs did do occasionally, was a superfluous kind of treat. It didn’t feel too much different than losing — just like when you’re at the beach, getting one flavor of ice cream doesn’t feel so different than any other. They all taste fine when you’re at the beach, right? Winning was great if it happened. Just like having good players was a nice but unexpected bonus. Ryne Sandberg? Greg Maddux? Mark Grace? Shawon Dunston? Thanks! In general, though, we were used to the good things coming amid a general mood of “so what.”

So, no, we didn’t go to Wrigley for the glory of victory.

Last week we went because a friend of ours got married the day before, in Lincoln Park, and instead of a typical brunch the next day, he rented out Brixen Ivy (god, it actually hurts more the second time), where about 75 wedding guests could eat, drink, and wander around, glancing occasionally at the baseball game being played across the street by a few dozen men being paid, between them, a few hundred million dollars. The other team was the Pirates. Did I mention that? Again, I don’t see how it matters.

Pretty soon the score was 7-0. Upstairs on the roof deck, no one’s mood was in any way diminished by the distant massacre. Back in the day, people used to set up lawn chairs on these roofs, but now there are actual rows of stadium seats. It limits mobility, but it reminds you which direction the stadium is, and where, ostensibly, the action is happening.

We sat down near a guy who said his name was Steve Nash.

“Really, your name is Steve Nash?” we asked.

This Steve Nash was a pediatrician and did not play basketball. We talked to Steve Nash about another Steve, Steve Bartman, and tried to locate exactly where he was sitting when he did that unspeakable but completely human thing he did, back in 2003. We located Bartman’s section, near the foul pole in left field. We wondered where Bartman was now. Steve Nash was pretty sure he had moved to Florida. We talked about the Illinois-Northwestern football game that had happened at Wrigley last season, and how space was so tight that the end zone ran right into the ivy, and how they were afraid some receiver would plow into the wall and never be found.

We left Steve Nash, and went down one level, to what was probably someone’s living room a few years ago and was now the concession stand. A furry-armed guy was out on the back deck grilling hamburgers and chicken breasts and hot dogs. He slid a window open, letting a gust of grill smoke enter the room. He took our order, slid the window closed again, then opened it one last time to throw our chicken breast and veggie burger on a couple of untoasted buns. The door slid closed again.

We sat and ate our food on a tall stool in the TV area. We watched a half-inning of the game on the high-definition screen on the wall, and there the action looked very sharp, very clear, but very wrong. Close-up like that, with the names and numbers so readable, it didn’t look like a Cubs game anymore. The stats even! No, that’s not the Cubs way. Making a big deal out of the numbers, the pitch count, all that? No. Precisely who was pitching for the Cubs didn’t and doesn’t matter. Precisely who was hitting the next home run off the Cubs didn’t and doesn’t matter. I still don’t know who it was. But it put the score at 8-0. The food was delicious.

I can’t say I’ve been in dozens of ballparks. Maybe 12? Counting minor league parks, maybe 20. The only stadium anyone bothers comparing Wrigley to, in terms of history and atmosphere, is Fenway. With Irish-Catholic cousins called the McSweeneys, who landed in Roxbury in 1865, sure, I went to a lot of Red Sox games growing up. Fenway is spectacular, but in a very different way than Wrigley. Fenway is electric. Fenway is tense. When you’re at a Red Sox game, you’re at a professional baseball game, you’re standing up, you’re paying attention, you’re keeping track of things. Because your team has a chance to win.

With the Cubs, though, all of that worry is gone. You’re there, and there is a game being played, but then again, there’s the sun, and what’s that guy doing with his stomach over there? And where’s the beer guy? And who’s playing at the Cubby Bear tonight? Peter Tosh’s brother? Should we leave after this inning to get a seat near the stage?

Now that I live in the Bay Area, we have the distinct advantage of having a team, the Giants, who know how to win, and a stadium, AT&T Park, where winning is irrelevant. The park is so well-designed, so insanely well-situated, that even on a game day, if neither team showed up, most fans would find a reason to stay. You could stroll the promenade, get some lunch, look at the waterfront, the marina, the shipyard, the East Bay hills beyond. It’d be two hours before you realized there wasn’t a game happening.

Check out this picture. 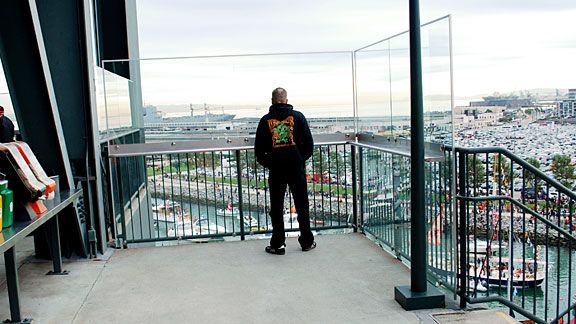 I took this at last year’s World Series. This was the seventh inning of Game 1, and this guy was drawn to the view. Just standing there, looking at the yachts, the water, the setting sun. There are so many open spaces, so much air and sky and room, that you almost feel cloistered when you’re sitting still. I didn’t have a seat for Game 1, and I didn’t care. I never noticed.

Back to Wrigley. Or the place across from Wrigley with the unprintable name. At some point, we found the groom and bride. We talked about their honeymoon, about some impressive choreography that had taken place on the dance floor the night before. The baby of a mutual friend was handed to me, and the baby and I had a long and meaningful conversation. This baby had no idea that the Cubs were playing about 600 feet away, that the Pirates had scored another run. Was it 9-0 or 10-0? No one knew. We couldn’t see the scoreboard. And meanwhile, this baby was really trying to get my attention. He was trying to prove, with his dimple and dark eyes and easy disposition, that he was the best baby ever made, and I think he convinced me.

At some point the game ended. It was 10-0, it had started to pour, and no one cared. The streets of Wrigleyville filled with people dodging the rain. Vendors tried to sell Kerry Wood memorabilia, and scalpers were selling seats to the next home game. Shirtless men stomped in puddles as if celebrating something. Actually, they were celebrating something. It all felt good. A bunch of people from Chicago had gathered in one place, and that was 98 percent of the point of it all. I’m sure among the thousands who flowed through the tributaries around the stadium were some who were upset the Cubs hadn’t won. I’m sure there are Cubs fans who are interested in the standings, and have been for decades.

But to fill a stadium you need more than that. You need to build and nurture a place that’s an actual place. A place that celebrates not just a team but a city — and a city’s refusal to plow the past under. Wrigley is the ultimate neighborhood stadium, the ultimate urban stadium, the ultimate statement that some semblance of tradition is more important than the money you could make with a hundred new skyboxes in some spectacularly soulless new stadium (sorry, White Sox). If the place is an actual place, little else matters. Owners should take note of the strange, almost inverted model of capitalism at play here. By not building a new stadium, the Cubs have filled the seats for 100 years. By not relocating it 50 miles outside Chicago, the Cubs have inspired fierce loyalty in its fans and the city. And by allowing the neighborhood to help shape it, and even profit from it, everybody wins.

Even if the Cubs never do.

Dave Eggers, an early contributor to ESPN: The Magazine, graduated from the University of Illinois — thus the (gentle, gentle!) joke about the University of Chicago, to which he would not have been admitted. He would also like to note that Brixen Ivy, beyond its unfortunate name, is a fantastically well-run place, staffed by very nice people.

Correction: An earlier version of this piece incorrectly stated that Andre Dawson was the only player to win an MVP from a last-place team. Alex Rodriguez accomplished this same feat while playing for the Texas Rangers in 2003.