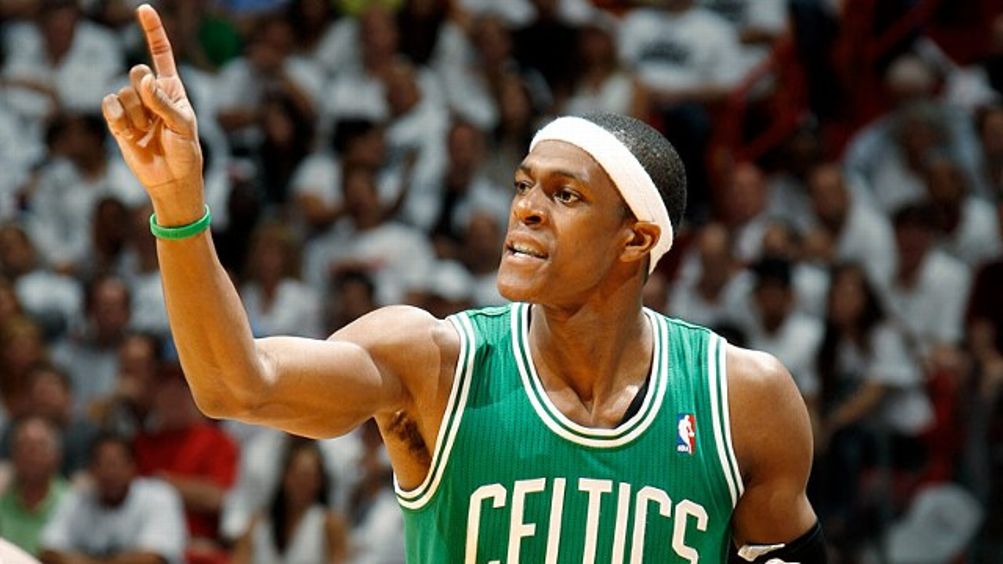 There’s always been something slightly off about Rajon Rondo. It’s those too-broad shoulders better suited for a cape, those faintly bugged eyes, the one game when he seems to be a wizard playing a child’s game and then the next one after that when it all turns around. But once you train your eye to follow this gangly, green blur zigzagging across the TV, these qualities grow familiar. In fact, you begin to wonder whether it’s actually the rest of us whose arms are just really short.

What remains a mystery after all these years is Rondo’s persona, or lack thereof. He is cool to the point of seeming emotionless, discrete in a way that only makes you more curious about what he is thinking. He has neither the studied earnestness nor the barely concealed arrogance that make up the twin poles of NBA affect. He has fun with the opening tip-off, yet during the game it’s nearly impossible to read his face and tell whether the Celtics are winning or losing.1 He is one of the most inscrutable players in the league at a position where even backups on 10-day contracts are given the leeway to swag out and yell to the rafters every now and then.

During these playoffs, Rondo has become slightly less enigmatic.2 There was that amazing postgame interview after the first game of the Sixers series when he cut off David Aldridge’s question about the advanced age of the Celtics, assured him they would be fine, and then reduced him with a long, pitying glare. And then there was this past Sunday. He played a half of basketball at a level few of us can fathom, and then, at halftime, he did something truly unimaginable: He said something interesting on his way to the locker room. The question was innocent enough: “What holes are you guys exploiting in this defense?” “Them complaining and crying to the referees in transition.” Rondo’s delivery was perfect, as though this was just some ho-hum boilerplate. He sounded neither timid nor arrogant; he simply sounded like someone who knew he was right. Like someone who accepted that he would be answering the questions from now on.

It’s taken a while for Rondo to find his voice. Let’s briefly recall the Celtics of the mid-2000s. This was a period when one of the most exciting Celtics was Ricky Davis, mostly because of his generally unpredictable approach to GETTING BUCKETS. When a nifty summer-league game from Marcus Banks was enough to keep hope alive, and a core of Delonte West, Tony Allen, and Al Jefferson represented the apex of dreaming. When you felt sorry for Paul Pierce, the childhood Lakers fan stabbed and then marooned so far from home. It’s hard to imagine a situation as dim as the one Rondo entered as a rookie in 2006-07. That season, Rondo split time with Sebastian Telfair, injuries thinned the roster of its scorers (an arsenal that included Wally Szczerbiak), the once-proud Celtics finished 24-58, and both Red Auerbach and Dennis Johnson passed away.

The installation of the Big Three prior to Rondo’s second season was one of those moments only permitted to cities like Boston — the Celtics’ restoration was good for basketball in a way the consolidation of forces in a mythos-dry town like Miami never could be. But for all their dreams-no-longer-deferred and team-building trips to Europe and “UBUNTU!” vibes, there was always the young, possibly not-yet-ready Rondo, so fundamental to their success yet so unreadable. There was chatter that the Celtics needed a veteran point guard to spell Rondo, or to take over during the inevitable postseason meltdown. Most of the time he had the look of someone who had just been scolded.

There are times when you can suffer being the big fish in a small pond, if only to remember that you are more than algae. Can you imagine what it must be like to play with the Celtics’ Big Three? To be the furniture in someone else’s dreams? It’s not as though Kevin Garnett and Ray Allen, admirable and likable when they were toiling away along the northern border, came to Boston to make friends/money and mentor the young guys. The team was assembled to win and, in those rare moments of now-or-never desperation during the 2007-08 championship season, you wondered if the pressure wasn’t too much for Rondo and the others who, just a year prior, had constituted the team’s nucleus. For Rondo, the pressure was acute — not just to win but to feed a marksman with obsessive-compulsive disorder, and to lob the ball to one of the most intense big men of our time.

In retrospect, this is exactly why Rondo has blossomed. He matured in this strange situation in which he could frequently feature as the best point guard in the league and the fourth-most famous member of the starting five. The question of motivation was put on hold, and individual achievement was out of the question. Coming of age under the hypercritical eyes of Doc Rivers and the Big Three meant that Rondo probably lost a bit of his individuality. But he survived, almost in spite of them. He’s become one of those players you can’t imagine on any other team, since part of his drive — beyond beating the opposition — comes from the measure of his teammates and franchise. Just this past spring, as rumors circulated that the Celtics were trying to trade Rondo, he played with a calm, inventive spite that seemed directed at everyone else on the court.

Maybe Rondo’s been listening all along, making a mental note each time he receives merely stinting praise as an auxiliary to the Big Three, his seething and revenge fantasies kept away from the cameras and beat reporters. At least that seems to be what we’re seeing during these playoffs, in these rare moments when Rondo shakes loose from the glum niceties of in- and postgame interviews. After all, he’ll be the one left holding it down once everyone leaves, unless Jeff Green, Brandon Bass, and Avery Bradley are better than we think they are. It won’t ever get any better for Rondo than right now.

It’s unlikely he’ll ever play with three future Hall of Famers again, and the Celtics as a team have, despite key injuries, benefited from this abbreviated season. Unlike 2008, they are perfectly calibrated to Rondo’s rhythms. He has had games this season where his brilliance has been effortless, paradigm-smashing, occasionally art-for-art’s-sake.3 There was the triple-double against the Knicks in March, when he essentially raised the bar so high that this, in the long view, was probably the moment Linsanity truly died. There was the 44-point game against the Heat in Game 2, the triple-double in Game 4, and That Tip to Mickael Pietrus in Game 5.4 The Big Three could have easily and honorably disbanded at some point since that historic 2008 campaign. But in the past few years, Rondo’s ascension has made up for Pierce, Allen, and Garnett’s lost steps — and he seems to know this. He understands that their next ring will be his.

Which is ultimately why I’ve watched the clips of Rondo’s postseason interviews as many times as I’ve watched the behind-the-back alley-oop to Kenneth Faried and that physics-bending pass to Brandon Bass. There are moments of sublime, improbable beauty, when things seem to just happen, and then there is the slow arc of growth, as you sit back and realize the star is finally growing into his swagger. The NBA survives on these story lines, all the extracurricular stuff that happens outside the lines and gives depth to these heavyweight bouts. It’s a league that rewards personality and quirk, where we take note of Russell Westbrook’s shirts and look out for Kevin Durant’s mom courtside. Where we access enough of the pregame hours to be able to wonder whether the grueling dramas of The Hunger Games novels might be affecting LeBron James. Until now, Rondo has always refused this kind of closer examination, the limits of his self-expression confined to the court (and, apparently, the roller rink).

If there is something unique about the NBA playoffs — besides the officiating, obviously — it is the way it restores great players to the competitive, boastful, sour-in-defeat maniacs that got them there in the first place. Throughout the winter and spring months, that spirit is sublimated in the name of various pragmatic fellowships — way-back-when Team USA camaraderie, sneaker deal realpolitik, the trench nostalgia of AAU, the long-distance bromances of the retweet. But with legend at stake, you begin to get a sense of what everyone really thinks about each other. When Rondo accused the Heat of running to the referees, it was more than gamesmanship or first-half frustration. It was a moral judgment. He’s never seemed more unusual — the freakish talent, the soft-spoken leader, the one who may finally smile tonight but who will never be found crying.