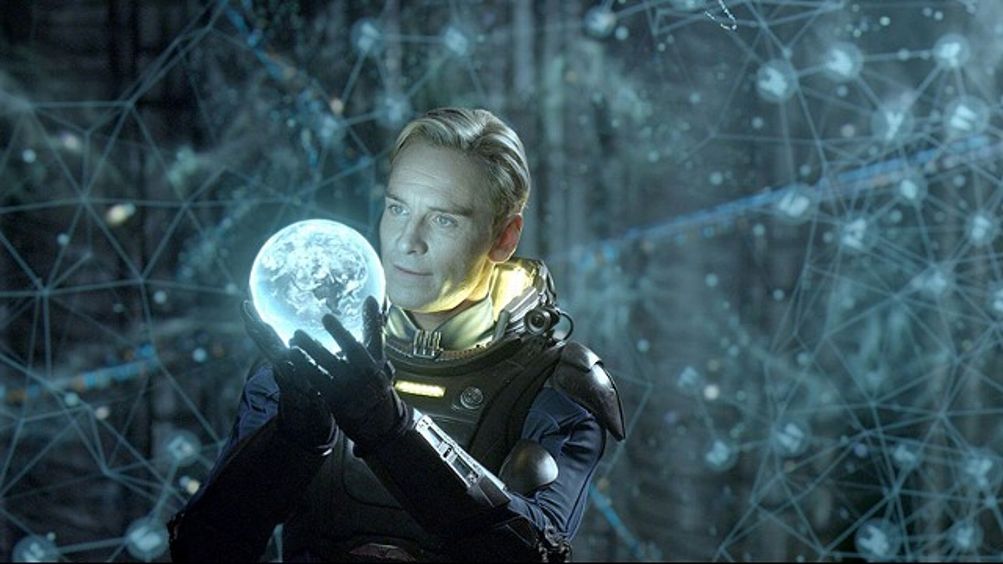 This being a column about blockbusters, we can stall a bit here and note that Prometheus is good largely in spite of a marketing campaign that seems to have been designed to fatigue casual audiences — who tend to prefer their Coors Light ads unsullied by brutal high-pitched screaming — and diehards alike. (There is something deeply cruel about suggesting to your most loyal fans that they’ll have to watch a fake TED talk set in the future if they want to fully participate in the Prometheus experience. Not to mention all that unwelcome new footage, with all those gah, I didn’t want to know that reveals.)

And it’s doubly distracting, this professionally “viral” Web-baiting rollout, because Prometheus is by far the most grown-up summer movie to grace theaters so far this year. It’s about creation and the unsettling question of whether or not the cosmic forces that govern our universe are fundamentally benevolent. It’s about the very real possibility that they’re not. It’s about dreams and other movies and the Alien franchise this film is extending. And it’s about family, the way all the Alien films (save perhaps the lonely first installment) have been about family and departing from the Hollywood norm of using horror and violence as a prod to bring disconnected people together. Just as often in these movies, it’s the other humans who reveal themselves to be alien — unlikable, untrustworthy, unknowable.

It’s striking, watching Prometheus, to think about the franchise from which it springs, and to which it is eerily loyal, despite the arterial spray of competing concerns and ideas brought to the series over the years by Scott, James Cameron, David Fincher, and Jean-Pierre Jeunet, a murderer’s row of pop directorial talent, all of whom made some of their weirdest and most revealing work for what has essentially been one long, bloody B movie. It makes you wonder if there’s been a better, or at least more consistently fascinating, franchise in the past 30 years.

Others have neatly skewered the film-nerd discourse that has grown up around these movies (“For a brief moment in the early ’80s, it looked as if the brave new world of Alien studies was going to splinter irreconcilably on the issue of Officer Ripley’s panties … “), so let’s just point out, in the interest of deflating everyone’s pretensions here, that Alien was originally called Star Beast and leave it at that. (It was given that name by the ’70s horror auteur and porn aficionado Dan O’Bannon, author of the first version of the Alien screenplay, who drew on his own painful experience with Crohn’s disease to conceive of the famous chest-bursting scene; later he became enraged with Ridley Scott over the perceived theft of his typewriter and was thrown off the film.)

The first Alien is probably one of the greatest horror movies ever made, but it’s striking, watching it now, how much of that terror is existential. Think of Ash, the grimly affectless robot played by Ian Holm, dissecting an alien while rhapsodizing about its fundamental superiority — “A survivor unclouded by conscience, remorse, or delusions of morality.” Ridley Scott’s second film has Harry Dean Stanton in a Hawaiian shirt, one of the great female heroines ever put on screen in Sigourney Weaver’s Ripley, and the lasting, unnerving sight of John Hurt lying quietly on an operating table with an alien attached to his face. But the real enemy is other people: the corporation that’s sent them to bring back a monster or die trying; the woeful crew that basically shatters, psychologically, one by one, long before the alien starts picking people off. It’s a movie about being fundamentally alone in a vast, echoing, beautifully shot universe that’s trying to kill you.

It’s still baffling to think that such a plaintively weird and sad film became a blockbuster franchise. Or perhaps it’s more accurate to say that it’s baffling that such a singular movie went on to become the canvas for any number of big-budget genre experiments. After Scott’s 1979 original, Alien became a kind of Rorschach blot for young Hollywood talent — hence James Cameron’s Aliens, which came seven years later and reinvented the franchise as a proto–Starship Troopers, complete with ooh-rah Marines and a seemingly endless supply of aliens there to die in a seemingly endless amount of ways. Cameron gave Weaver’s Ripley a tiny child to protect and a showdown with a similarly maternal alien queen. It was basically “Rambolina,” as Weaver called that version of Ripley, and remains both a fantastic action film and evidence that James Cameron couldn’t be less interested in all the sad man-in-the-universe stuff that so clearly obsessed Scott. He just wanted to see aliens explode.

Alien 3 was 24 29-year-old David Fincher’s first film (and he won’t talk about it now, so scarred was he by the development and studio hell he went through to make it). An early version of the script was written by none other than William Gibson (he had an idea about the aliens developing a kind of zombie gene that would infect humans if they got too close); the movie that ultimately got made was set on what was essentially an interstellar steampunk rape colony and infuriated fans of the franchise by killing off all the non–Sigourney Weaver survivors from Cameron’s movie in the new film’s first scene. It’s not a great movie, but it is a very David Fincher one — it has his saturated color palette, dark vibe, low camera angles, and generally bruising feel. It ends with a now alien-impregnated Ripley claiming kinship with the star beasts — “Don’t be afraid, I’m part of the family” — and then drowning herself and her monster child in a vat of molten lead …

… only to be cruelly cloned and brought back for 1997’s Alien Resurrection, directed by City of Lost Children‘s Jean-Pierre Jeunet and written by geek godhead (and Avengers director) Joss Whedon. Winona Ryder plays an android. The film’s first shot is of a nude Ripley being reborn in a giant test tube; she goes on to awkwardly dunk a basketball and, for the second movie in a row, kill an alien she has more or less given birth to.

Which is to say that there are few franchises through which more talent has passed; it’s also to say that these four movies (we’re just going to go ahead and pretend like the multiple Alien vs. Predator films they made after Alien Resurrection don’t exist), which together have grossed more than $500 million, are some of the flat-out strangest and most abnormal blockbusters ever made. It’s amazing they keep making them.

And here’s the thing — despite being one of the summer’s biggest and most commercially ambitious films, Prometheus is probably the single strangest one since the original. It manages, in the way that Scott’s first Alien did, to wed serious and quixotic questions about creation and the bitter origins of life to some of the most unlikely, visceral, and entertaining horror scenes ever put to film. One sequence in particular is probably the most vivid and outright revolting thing any director in this franchise has attempted since that first alien came gurgling out of John Hurt’s chest.

It’s the type of spectacle that restores your faith in the type of event cinema that dominates the summer, and though Prometheus was clearly expensive to make (though not compared to some of the other landmark blockbuster releases on the 2012 calendar), it’s not the film’s size or scope that make it great; it’s the quality of detail and ambition that Scott and nerd-god screenwriter Damon Lindelof (working off a draft first written by Jon Spaihts) bring to the work. It remains baffling that somehow this, of all franchises, has become the one where directors and screenwriters make personal statements and explore big (albeit regretfully Erich von Däniken–informed) ideas about the nature of man and the universe. But that’s what Scott is using it for.

Prometheus contains riffs on cinema history — Lawrence of Arabia, Rosemary’s Baby, The Shining, 2001: A Space Odyssey, and any number of other classic sci-fi and horror films are explicitly referenced — beautiful 3-D photography, and quality acting from Michael Fassbender, Logan Marshall-Green, and Noomi Rapace, among others. It also features a scene in which Charlize Theron does near-nude push-ups; multiple flamethrowers; and the soothing sight of Stringer Bell idly playing an accordion that supposedly once belonged to Stephen Stills. Not to mention decapitated heads and caves full of evil. It’s a movie as comfortable being smart as it is being dumb, quiet as it is loud. It does, in short, what so few franchise installments these days do: makes you hope for still more.

Zach Baron once ran terrified out of the theater during a preview — a preview! — for Alien 3. Find him on Twitter at @xzachbaronx.