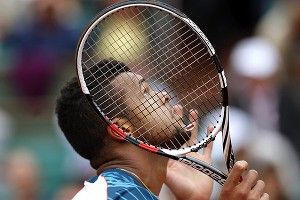 Men’s tennis is a conservative sport right now. I’m not talking about the dress code at Wimbledon. I’m talking about the established order, the big three, and the threat of change. If the past few years have been a golden age for tennis, one of the things that makes it seem utopian is its unchanging aspect: So many matches are thrilling, astonishing, and worth watching, but they take place in a predictable universe, one with a predictable range of outcomes. In most sports, unpredictability is part of the excitement, part of the reason to get invested in the first place. Tennis these days is a little different. Its stability is seductive. It doesn’t matter if you dislike Rafa Nadal or Novak Djokovic or Roger Federer, or if you have your own favorites, or if you cheer for the underdog. When they play each other with a championship on the line, the consensus is that’s somehow good for tennis. (Whether Andy Murray belongs in this group is a subject for another story.) In a recent, fascinating interview, the New York Times pointed out to Nadal that in 2009, the crowd at Roland Garros rooted against him during his loss to Robin Soderling. Nadal replied, “Last year, I played the final against Roger, I don’t feel the crowd against me. I feel the crowd 50-50 supporting a great tennis match, and that’s it.”

Tennis fans sometimes talk about matchups between the top three men the way Republicans sometimes talk about free markets, like they’re a quasi-mystical force for good. I do it all the time. I’m deeply invested in tennis’s established order. I want the top three to win, and win, and win again, until they face each other and something has to give. I take their winning for granted. It’s hard not to. Federer, who holds the record for the most wins at a slam, will be appearing in his 31st major semifinal. Djokovic has the chance to become the only man beside Don Budge and Rod Laver to hold all four major titles at once. Nadal could surpass Björn Borg for the most French Open titles.

The point is that something like history seems to be at stake whenever these three guys step onto the court. The records become proof that they are the best, and that they will stay forever the best, and that our debates over who’s better than who can remain intramural. Nadal will probably win this weekend, as he almost always does at Roland Garros, and then in a month they’ll go to Wimbledon and do it all over again.

Today Federer will play Djokovic and Nadal will play David Ferrer (who is, really, a better clay court player than the guy who normally rounds out the top four, Andy Murray). This is what everyone expected, and so it seems to satisfy some kind of just order. Only something happened on the road to inevitability. A loser appeared, and I can’t do what I normally do and pass him by.

Jo-Wilfried Tsonga is the fifth-ranked player in the world. In the cartoon cosmos of tennis superheroes, he’s the hapless sidekick, the genius who illustrates, by contrast, how hard and impressive it is to achieve what the top guys do. Tsonga is insanely talented, a big guy who can make the ball look small and weightless, and he hits thrilling, unexpected shots. He also hits stupid shots, and the knock on him is that he doesn’t seem to care. Tsonga is capable of beating any of the top three at a slam — and in fact has done it, beating Nadal at the Australian Open in 2008 and, more memorably, Federer at Wimbledon last year. At the same time, he doesn’t act like he thinks he belongs with them. As Reeves Wiedeman has written, Tsonga is the leading member of “Les Nouveaux Mousquetaires,” a group of young French players who were supposed to bring glory to French tennis and instead brought a lot of entertainment and not too much ambition. Tsonga has proven himself to be just as likely to blow a two-set lead to the second Swiss, Stan Wawrinka, as he is to overcome a two-set deficit against Federer. Coming into this year’s French Open, he loudly wrote off his chances of winning, as well as those of his countrymen.

At the start of his match against Djokovic on Tuesday, he played his assigned role perfectly: He lost the first set in 21 minutes, only to win the second with flashes of brilliance, overcoming a break early on and winning the set after a wicked forehand rally. Classic Tsonga, I thought: One minute he’s totally checked out; the next, he’s playing better than the best player in the world. When he was broken early in the third set, I wasn’t surprised. I was about to write him off.

He proved me wrong. Not just because of the high level of tennis he played during the third and fourth sets — we already knew he could hang with the best for stretches of time — but something harder to describe. It was the sense that he wasn’t riding a streak, but was instead drawing from some deeper reservoir. This is probably an irresponsible observation, since there’s really no way to read his motivation. It was just his whole bearing, which seemed to say, “Forget what I said — I want to win this thing, and I can.” When it came time to put Djokovic away, Tsonga couldn’t do it. He played a little tight, played it a little safe, and played it fine. Djokovic, as ever, went for the biggest shots when everything was on the line, and he hit them. What kept me from writing Tsonga off yet again was the way he hung in there. He blew two match points and then didn’t crumple, and then blew two more and still didn’t go away. He lost the tiebreak as tight as you can without turning into John Isner. He had Djokovic howling, not grunting; these were feral, wounded cries. He was howling, too, and screaming, exhorting the crowd, which was going crazy. I don’t speak French, and for all I know he was just saying “Allez!” But it looked like he was telling them that he would leave everything he had, his body and his heart, on the court, and asking the people to carry him home.

Djokovic didn’t always play his best. There have been moments this week when it seemed like someone had slipped him some Kryptonite in the form of a delicious French pastry. (I swear, Novak, it’s gluten-free! Those French chefs can do amazing things with rice flour these days!) And I don’t know if this will be a turning point in Tsonga’s career, or just another close call, another flash of promise that flamed into nothing, like his defeat of Federer a year ago. But I do know that for a few hours, he was a threat to the existing order, and to my surprise, when the match had ended, I was sorry Tsonga hadn’t won.

It was only a short time ago that Djokovic himself was nothing more than a threat to the existing order. You can fix the date: September 11, 2010, the day that Djokovic beat Roger Federer in five sets in the semifinals of the U.S. Open. What was more upsetting than Djokovic’s win itself was the way he won: sliding on the acrylic court as if it were made of clay, hitting the lines and corners with reckless shots when he could not afford to miss. Before the match, I had assumed that Djokovic would play well but that Federer would win, because Federer was supposed to play Nadal in the final. When that didn’t happen, the result seemed wrong, in almost a moral sense. I wasn’t surprised when the final was washed out the next day. That Sunday, it was the least the universe could do: If Federer and Nadal weren’t playing in the final, then the final wouldn’t be played. Within a year, of course, things had changed. Djokovic now represents the existing order. It turned out that the greatest rivalry in the history of tennis during my lifetime had room for another competitor.

Someday, there will be a new order, and that will be OK. That day hasn’t yet come. When Tsonga lost the fourth-set tiebreak, the match was over. There was no question, from anyone, including the two competitors, that Djokovic would run away with the fifth.

The play was finished, but Tsonga wasn’t quite done. Afterward, he sat in his chair and put a towel over his head. It was a powerful sight, a big man veiling his emotions, and I have to say it’s not one I ever expected to see from Tsonga. I tried not to think of what was running through his mind. “I was tired. I was frustrated. I was disappointed,” he said afterward. “You get all kinds of feelings going through your mind. You want to break your racket. You want to shout. You want to cry. You want to laugh and say, ‘Oh, come on, that’s a joke. How could I lose this match?'”

The better question, of course, for him to ask was what he could have done to win it. That would be something different. But, for a few hours at least, Tsonga made me think that something different was possible, and it didn’t seem so bad.