‘That Was Supposed to Go In’ 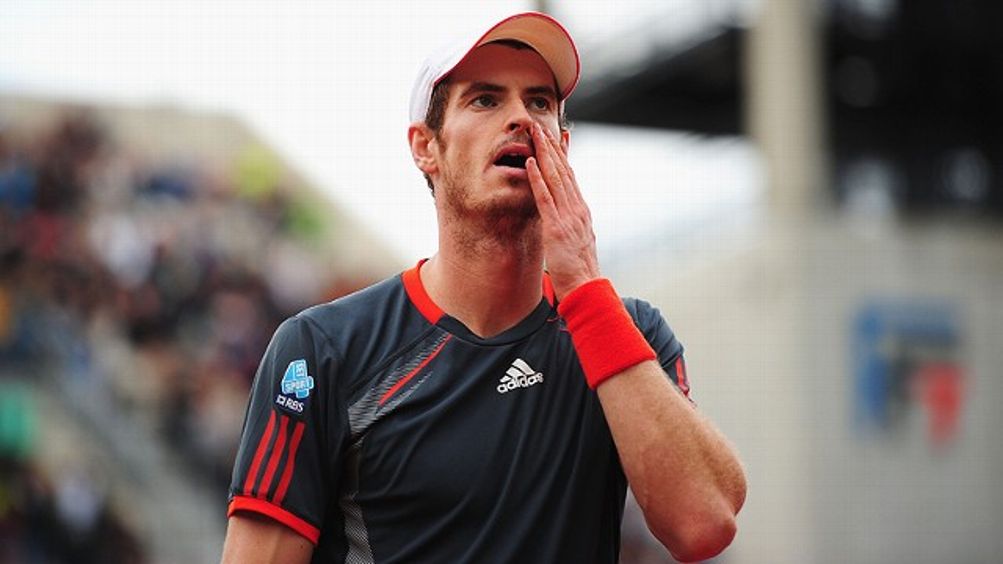 Andy Murray often looks like he’s choking. I don’t mean “choking” in the sense of unraveling mentally and losing a winnable match, although Murray sometimes does that; I mean “choking” in the sense of being deprived of oxygen. Compared to the other members of tennis’s nominal big four — Rafa Nadal, Novak Djokovic, and Roger Federer, each in his own way a marvel of sculptural proportion — Murray has always been a little ramshackle, appearance-wise. He’s a kind of spindly haystack of mismatched athlete-parts, topped off by that Tom Verlaine yowl of a face, which can look bulging, or gaunt, or bulging and gaunt at the same time — in the heat of athletic competition, the face of someone who’s struggling for air.

I can’t imagine, and I have tried to do so at length, how it must feel to be Andy Murray at a major tennis tournament. To be, in terms of pure ability, one of the 30 or so best tennis players ever to pick up a racket,1 but to be permanently perceived as kind of a loser because most people only ever watch you against the three unclassifiably great players who happen to be roughly your age … I mean, is there anything more unfair than sports? Imagine if music were as punishing as tennis, and we thought, say, Nirvana were kind of a losery band because they weren’t the Beatles or the Stones. That’s weird and ridiculous, right? But the Murray stereotype keeps bleeding all over any attempt to correct it. On Wednesday, after the rest of the French Open quarterfinals played out more or less according to plan (Federer > Del Potro, Djokovic > Tsonga, Nadal > Almagro, even if the first two took five sets), the focus fell on Murray’s attempt to complete the big-four semifinal everyone wanted — and he lost, in classic, strangled Murray style, to David Ferrer, 4-6, 7-6 (3), 3-6, 2-6.2

If you’re in Murray’s position, how do you avoid raging bitterness? How do you preserve any hint of belief that you might one day, the mountain being what it is, get over the peak?3 The typical knock on Murray is that he’s a high-strung headcase, that he lacks the mental fortitude to take down warrior-angels like Federer and Nadal when it counts.4 Whenever the three players ahead of him turn inward on the court, it’s usually to draw from some reserve of strength (cf. Djokovic in the fourth set against Tsonga on Tuesday). For Murray, inwardness seems to mean conflict, anxiety, and doubt. His eyes go soft and shaky, he starts muttering to himself, he hunches his shoulders, he slams his racket, he convulses like he can’t breathe. What I wonder is how much of that response is innate, and how much is a reaction to lived experience. Is he giving way to some fundamental weakness of character, or is he struggling to unlearn a lesson (your best will not be good enough) that any of us would have learned in his place?

One thing I think about Murray — this is probably the same thing as saying “a human being feels pressure” — is that he cares what people think about him.5 That’s just an impression, and please pipe in every caveat about no one knowing what’s going down in anyone else’s head. But for a player with at least a supra–Tim Henman degree of feistiness, Murray is often curiously restrained. (I almost wrote “repressed.”) He looks down when he’s angry. He yells at himself more than he yells at anyone else. Maybe that’s just a mark of not wanting to wander into the shrieking machete whirlwind of the British tabloid media, but everyone recognizes the studied blandness of the yfrog-savvy athlete, and what Murray does is different. He seems to feel a human responsibility to carry himself in a certain respectable way. Consider the interview he gave during Wimbledon last year, in which he (a) reveals his plan to be nastier and do more trash-talking on the court, and (b) makes this plan sound like an earnest and dutiful effort to win approval from the elders of tennis.

In tennis the guys are mostly sporting and get on well, but when you’re out there you need to put that to one side. You have to treat your opponent like he’s your worst enemy on the court. I know John McEnroe thinks we need a little more animosity between the top players, and it’s probably true. I believe everyone would enjoy it more if the players were a bit more vocal about any dislike they might have for each other.

I’ve seen plenty of clips of the aggro between Jimmy Connors and McEnroe and I heard some good stories about Ivan Lendl from my former coach Brad Gilbert, who had an 0-16 record against him. Unfortunately, due to the number of swear words, I can’t repeat any of them.

So here’s a thought: What if he just up and repeated some swear words? Murray has been intermittently booed by the French crowd this week due to a bit of fake/real injury dithering (another one of his supposed psychological hang-ups), and his reaction to this treatment made me wonder whether Murray, and maybe the entire sport, would be better off if he embraced his inner villain, did a full-fledged heel turn, and just basically alienated the bejesus out of everybody. Against Richard Gasquet in the round of 16, Murray visibly enjoyed the catcalls, saying afterward that “It was like a football match — and I like football” and “It was the most fun I’ve had on the court in a while.” This photo from the match, of a sneering, lip-licking Murray — just a cold-hearted dude breaking hearts and swinging the knife for four sets — showed him in something like the mold of his coach, Ivan Lendl, the tennis player most likely to commit murder in a Coen Brothers movie someday.

Against Ferrer in the quarters, the boos were less caps-locked, but Murray seemed to thrive on the moments of adversity. Early in the fifth set, the crowd actually started cheering his name, and he promptly tailspun into one of his patented Murray funk-outs, committing random spectacular shots amid a horror show of missed easy ones, sighing a lot, and barking at himself. Again, Ferrer is a more accomplished clay-court player than Murray. But Murray can do things of which Ferrer is simply not capable. He made 59 unforced errors in the match, then politely credited Ferrer in the press conference. The lasting image I’ll take from this is of a not necessarily nice guy losing, as usual, in a rather nice way. Which is not the poster you dream about when you’re a world-class talent planning your comet’s run through men’s tennis.

So, poster-wise: Can’t you see Murray as a skittery, post-punk bad guy, staring down linesmen, yelling at the crowd, and taunting his opponent? Granted, in the world as it actually exists it’s at least a little fatuous to talk about “villains” in sports. People are complex, even guys who hit bouncy yellow balls all day. But say Murray played with an angrier edge, turned more of his dissatisfaction outward. Couldn’t that help keep him out of the vortex of self-consciousness? Give him a sort of dark inspiration? Make him a little looser, at least?

The only era of men’s tennis to rival this one for sheer talent, the ’70s and ’80s, was full of arrogant divas whom some meaningful percentage of every crowd loved to hate. Jimmy Connors was a iron-headed bully. Borg was a frosty artiste. McEnroe was McEnroe, a charmless, entitled brat straddling the border where beauty meets abuse. This era, by contrast, is dominated by mostly likable players who know how to live in the media. Well, Murray’s tried everything else, so why not become an ego-throwback? This feels like weird advice to give to an actual person.6 But honestly, I’m tired of watching Murray squirm on the end of the pin we’ve stuck him on. He’s an amazing athlete. I kind of want to see him stick out his tongue and just burn everything down.