The Consequences of Caring 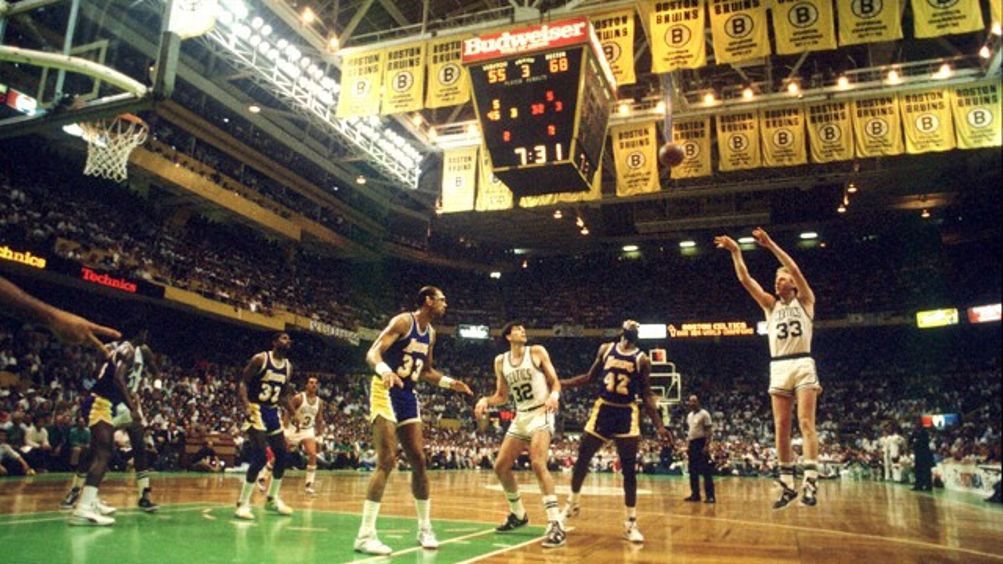 In honor of the 25th anniversary of Game 4 of the 1987 NBA Finals, here is an excerpt from Bill Simmons’s The Book of Basketball breaking down the final moments from the Boston Garden.

In the big scheme of things, number 33 was an extremely tall and well-coordinated guy who did his job exceptionally well. That’s it. You can’t call him a superhero because he wasn’t saving lives or making the world a better place. At the same time, he possessed heroic qualities because everyone in New England bought into his invincibility. He came through too many times for us. After a while, we started expecting him to come through, and when he still came through, that’s when we were hooked for good. I know this was the case because I lived through his prime — whether I have developed enough credibility in your eyes as a basketball thinker is up to you1 — but I’m telling you, that’s how Boston fans felt in the spring of 1987. Unfortunately, you can’t glance through Bird’s career statistics in the Official NBA Register and find the statistic for “most times the fans expected their best player to come through and he actually did.” So here’s a story about his most memorable game-winning shot, a shot that didn’t actually go in.

After winning three MVP awards, the Legend was rattling off the greatest run of his career in the spring of ’87, single-handedly dragging an aging roster through three punishing rounds despite a broken foot for McHale (gamely kept playing) and injuries to Bill Walton and Scott Wedman (both out), as well as sprained ankles for Parish and Ainge (playing hurt). Um, those were only five of the best seven guys on the team. When we were finished in the waning seconds of Game 5 of the Eastern Finals, Bird saved the season with his famous steal from Isiah, which remains the loudest I ever heard the Garden in my life, the only time I remember the upper balcony actually swaying because everyone was jumping up and down in sheer delight. That’s the great thing about sports: when you hope for something improbable to happen, 4,999 times out of 5,000 it never happens, but then there’s the 5,000th time, and for God’s sake, it happens. That was the Bird steal. Two games later, he finished Detroit with a variety of backbreaking shots down the stretch, including a ludicrous 15-foot lefty banker that had to be seen to be believed.2 At this point, we were convinced that Bird couldn’t be stopped. He just kept raising his game to another level; how high could he go? Down by one in the final 30 seconds of a must-win Game 4, the Celtics tried to run a play for Bird, but James Worthy smothered him and held his jersey to keep him close.3 Somehow the ball rotated around and back to Bird’s side. Worthy stupidly left him to jump out on Danny Ainge, leaving the Legend open in the corner for a split second.

DJ swung the ball to Bird, who planted his feet and launched a three right in front of the Lakers’ bench.

If they stopped the game right there and announced that Bird would walk across the Charles River, not only would I have been the first kid there, I would have brought my camera. We stood and cheered and screamed and stomped our feet through the entire time out, never thinking we would blow the game after what we had just witnessed. The Lakers ran their patented “let’s get the ball to Kareem and the refs will bail him out” play and got him to the free throw line. He made the first and missed the second, leading to an egregious no-call from Earl Strom where Mychal Thompson slammed into McHale and Parish and caused them to knock the rebound out of bounds. Lakers ball. That opened the door for Magic’s spine-crushing baby sky hook that McHale would have blocked if he wasn’t playing on a freaking broken foot. (Sorry, I’m still bitter.) Now there were just two ticks left on the clock and the Lakers were jumping around and blowing each other … but we still had Thirty-three. Everyone in the building knew Larry was getting the ball. Everyone in the building knew we were still alive.

So what happens? The Lakers stick two guys on Bird. Somehow, he breaks free at midcourt (seriously, how the hell does this happen?), slides down the sideline, grabs the inbounds pass, controls his momentum long enough to set his feet for a split second right in front of Riley, steadies his upper body for a nanosecond, and launches a wide-open three in front of the Lakers bench. At that precise moment, standing in front of my seat at midcourt with pee probably dripping down my leg, I would have bet anything that the shot was ripping through the net. I would have bet my baseball card collection. I would have bet my Intellivision. I would have bet my virginity.4 I would have bet my life. Even the Lakers probably thought it was going in. Watch the tape and you will notice Lakers backup Wes Matthews crouched on the floor and screaming behind Bird in sheer, unadulterated terror like he’s about to watch someone get murdered in a horror movie. You will hear the fans emit some sort of strange, one-of-a-kind shrieking noise, a gasping sound loosely translated as, “Holy shit, we are about to witness the greatest basketball shot ever!” Hell, you can freeze the tape on the frame before the ball strikes the rim. It looks like it’s going in. It should have gone in.

When Bird released the shot, his body was moving directly between me and the basket; you could have drawn a straight line over the arc of the ball and extended it over Bird’s head right to me. Two decades later, I can still see that moon shot soaring through the air on a direct line — it was dead-on — knowing immediately that it had a chance, then feeling like Mike Tyson had floored me with a body punch when the ball caught the back of the rim. Bird missed it by a fraction, maybe the length of a fingernail. It couldn’t have been closer. You cannot come closer to making a basketball shot without actually making the shot.5

Here’s what I remember most. Not the sound in the Garden (a gasp of anticipation giving way to a prolonged groan, followed by the most deafening silence imaginable),6 or the jubilant Lakers skipping off the court like they were splitting a winning Powerball ticket twelve ways (they knew how fortunate they were), or even the shocked faces of the people around me (everyone standing in place, mouths agape, staring at the basket in disbelief). Nope. It was Larry. As the shot bounced away, he froze for a split second and stared at the basket in disbelief even as the Lakers celebrated behind him. Just like us, he couldn’t believe it.

The ball was supposed to go in.

The split second passed and Bird joined the cluttered group of players and coaches leaving the floor. When he walked through the tunnel by me and my father, he seemed just as confused as anyone.7 The rest of us remained in our seats, shell-shocked, trying to regroup for the walk outside, unable to come to grips with the fact that the Celtics had lost. If you saw Saving Private Ryan in the theater, do you remember how every paying customer was paralyzed and couldn’t budge as the final credits started to roll? That’s what the Garden was like. People couldn’t move. People were stuck to their seats like flypaper. We went through the seven stages of grief in two minutes, including my father, who was slumped in his seat like he had just been assassinated. He wasn’t showing any inkling of getting up. Even when I said to him, “Hey, Pops, let’s get out of here,” he didn’t budge.

A few more seconds passed. Finally, my father looked at me.

“That was supposed to go in,” he groaned. “How did that not go in?”

More than twenty-two years have passed since that night … and I still don’t have an answer for him. For everything else, I have answers.