The Best Sports Section in History 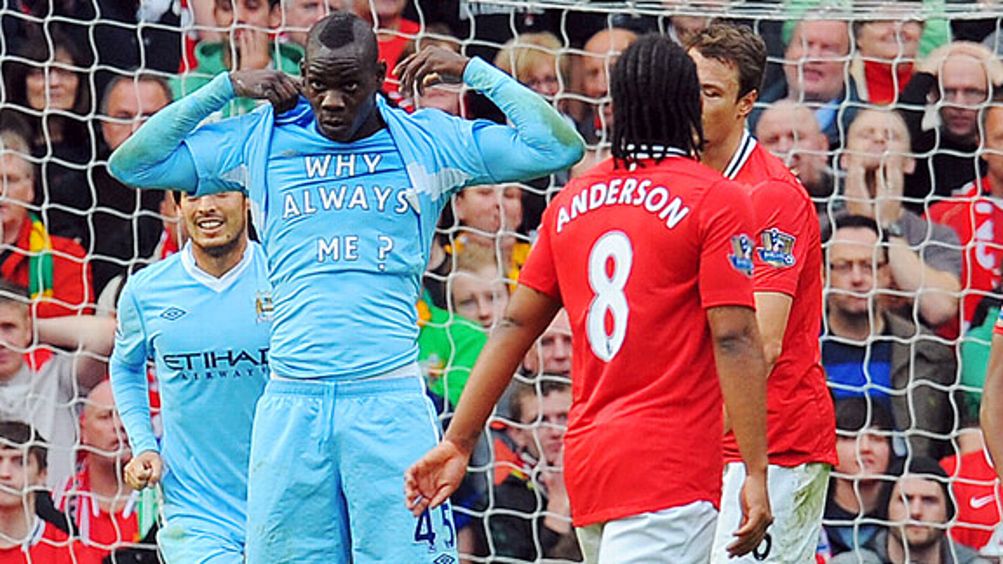 Why always me? Because, baby, you’re a firework. On Sunday, Mario Balotelli scored two goals, helping Manchester City set it off at Old Trafford, winning 6-1 and handing Sir Alex Ferguson and Manchester United one of the most devastating losses in his and the club’s storied history. It was a complete and total victory; City outhustled, outpassed, outfinished, and outclassed United, leading Ferguson to mourn, “It was our worst ever day. It’s the worst result in my history, ever. Even as a player I don’t think I ever lost 6-1.”

Whether it was a regime change, a power shift, or a changing of the guard, I could not tell you. But if Sunday’s win was any of those things, I have to be completely honest and say I, for one, am not entirely mad at our new sky-blue East Manchester overlords.

Why? Well, how can you not, somewhere deep down in the part of your heart that simply likes watching this sport played at astral plane levels, like a team with David Silva and Mario Balotelli?

City’s rise to the top of the table, taking them five points clear of second-place United, is soured by the financial doping performed by their owner, Sheikh Mansour. It was never a matter of “will they?” but rather “when will they?” and “how much will it cost and in what fashion will they do it?”

Last season, City willed itself into third place through the dogged determination and hounding of their seemingly endless line of defensive midfielders and manager Roberto Mancini’s cautious style of play and preference for water-carriers and athletes over artists.

Elements of City’s superior fitness and bulldozing athleticism were still on display Sunday and can now be found in United fullback Patrice Evra’s night terrors. That’s where the overlapping runs of James Milner and Micah Richards will be screening for the foreseeable future.

But it was the performances of Silva and Balotelli that separated City from United, and separate this season’s City side from last season’s.

David Silva is simply the best player in the Premier League right now. His dribbling causes pratfalls and his passing makes me feel like I’m watching a Terrence Malick movie. If his self-volley, 30-plus-yard diagonal-pass-as-dagger-through-the-heart assist to Edin Dzeko for City’s sixth (at 1:53 in the video above) didn’t set your soul on fire, then you need to see a hypnotherapist, STAT, and find out what is so deeply and profoundly wrong with you.

Mario Balotelli doesn’t make me feel like I’m watching any kind of movie. Mario Balotelli is a movie. This is, after all, a man who, two weeks after signing with City, crashed his Audi while carrying 5,000 pounds on him. When the police asked him why he was carrying such a knot, he responded, “Because I am rich.”

Nothing in his storied off-field career can match the whirlwind derby weekend he had. On Saturday night, Balotelli set his own house on fire while shooting off fireworks from his bathroom. On Sunday he was seemingly unstoppable, tormenting the United defense, getting Jonny Evans sent off, and scoring a pair of goals. Upon rolling his first past United keeper David de Gea, he revealed a T-shirt that asked, “Why Always Me?” After the match he was rumored to have been seen driving around Manchester in his Bentley, high-fiving City fans. Monday, he put the cherry on top when he participated in a PSA for fireworks safety. Because of course he did.

His style of play mirrors his off-the-field life; it’s impish, opportunistic, and unpredictable. Balotelli is a good athlete, but he doesn’t blow you away with his runs or dribbling. He often seems like he’s — to steal a phrase from the Brits — taking the piss. Just look at his first goal. Who thinks to roll a shot in from that distance?

Balotelli’s crazy, often comic presence on the team is at once necessary and perplexing. It gives City a personality beyond oil-money-funded Decepticons. But it’s strange: Mancini has a habit of freezing out players who don’t buy into his program. Ask Emmanuel Adebayor, Craig Bellamy, or Carlos Tevez. There is obviously some kind of father-son relationship going on between him and the gifted Italian striker. And Mancini’s (albeit somewhat hypocritical) faith in him paid off on Sunday.

Sir Alex Ferguson, on the other hand, probably left Old Trafford feeling like his players took advantage of his faith in them. Actually, scratch that, he probably left with a raw throat, since he apparently read his team the riot act (or gave them the hair-dryer treatment) after the match, calling them “fucking idiots” in a postgame tirade.

Some of the blame falls on Sir Alex, though. Last week, The Reducer praised Fergie for imposing his will on his side before a big match with Liverpool, dropping Wayne Rooney because his head wasn’t right. This week, the same tactic seemed to backfire on the manager.

I remember during the Sixers-Hornets series in the ’00 NBA playoffs, Allen Iverson was going particularly hammer on Charlotte when, upon one of his countless and fearless drives to the lane, Anthony Mason made a forearm imprint on his throat region. With one clothesline he said, “You may beat us, but you’re not filming an inspirational DVD in the process.” United needed their Anthony Mason on Sunday morning.

More likely than not, that man was Nemanja Vidic. The Serbian defender was benched on Sunday under somewhat mysterious circumstances. As the club’s captain and best defender, he might not have stopped City from winning, but you’d have to think he’d have prevented United from being embarrassed.

Let’s talk Toon. Last week The Reducer got upbraided a bit for ignoring Newcastle’s come-from-behind draw with Spurs. So we won’t let this week go by without dog-pound-woofing for Yohan Cabaye’s 80th-minute winner against Wigan.

When you watch that goal, you can see the unity in the side as Cabaye goes and celebrates with his teammates. It’s hard to say what’s more surprising: Newcastle’s unbeaten start to the season or the new identity of the team.

Last season, Newcastle finished midtable with largely the same side that pulled it out of the Championship division, led by veteran Brits such as Kevin Nolan and Joey Barton. Those players, along with Andy Carroll and Jose Enrique, are gone and Newcastle is having a French Revolution, with players such as Cabaye, Hatem Ben Arfa, Sylvain Marveaux, and Gabriel Obertan, leading one French football writer to call them “Chateauneuf-du-Tyne.”

Look, nobody wants to believe in the hegemony-challenging starts to the seasons of Newcastle and newly promoted Norwich (who drew with Liverpool over the weekend and sits, unbelievably, in a tie for eighth) more than The Reducer. But here’s the thing: These teams are not deep enough. In a lot of ways, your place in the league isn’t decided by your starting 11, but by the players who step up when members of the starting 11 have hamstrings, divorces, dips in form, and fits of having their head turned by other clubs.

In past seasons, clubs like Hull and Blackpool have made Icarus-like flights, only to be burned up during a long season full of injuries and contract disputes and everything else that can stand in the way of playing above your station.

Norwich and Newcastle are having inspirational starts to their seasons, but the real test will come when another team comes in for Cabaye in January, or the Canaries’ fantastic midfielder Wes Hoolahan picks up a February ankle injury.

• Watching Spurs dispatch Blackburn over the weekend, The Reducer couldn’t help but wonder if Tottenham was winning in spite of its manager, Harry Redknapp. This column and others have jokingly celebrated Redknapp’s rather straightforward approach to setting up his team (“Just fucking run around a bit“), but Spurs seem to be getting results despite Gareth Bale’s scoring only one goal in the first eight games of the season, despite Luka Modric’s spending half of those games in a sulk, despite Benoit Assou-Ekotto’s firing off diagonals to imaginary men in the same color kit and despite the entire attack running through the mercurial Rafael van der Vaart, who scored both Spurs goals over the weekend. There’s something so unorthodox and improvisatory about the way Tottenham has been playing. Maybe Redknapp is a secret tactical genius? For the sake of England, let’s hope so.

• Last week, The Reducer wrote about its man crush for Chelsea boss Andre Villas-Boas following the Blues’ 3-1 defeat of Everton. So, naturally, following Chelsea’s shock defeat at Queens Park Rangers in a testier-than-expected West London derby, it’s time to double down on the belief! And why not? Not only did Villas-Boas show a steel set following the dismissal of two of his players by boldly tinkering with his side (pulling off Daniel Sturridge and Juan Mata and nearly getting a draw out of it) but he also did something much more important than that. Pulling a page out of his mentor Jose Mourinho’s playbook, Villas-Boas created an everyone-is-out-to-get-us siege mentality that might serve Chelsea very well in the months to come. Chelsea probably lacks the bullets to win a firefight with the Manchester teams, but it might be able to overcome that deficiency if the players fight for each other. That’s what Villas-Boas is likely counting on.

Really could have gone with City’s third (Aguero, starting with a Balotelli backheel), City’s sixth (Silva’s psychic cross-field pass to Dzeko), or Everton’s Royston Drenthe’s curling thunderbolt. But The Reducer loves a towering header as much as the next fan.

“I don’t know what happened, apart from he lives in a hotel now.” Perfect.