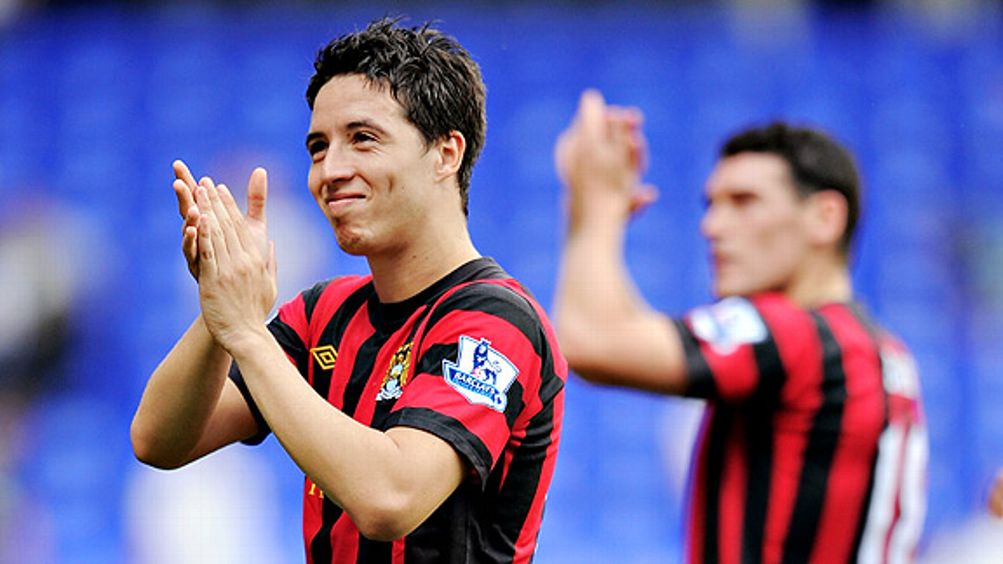 Take minks off, take things off, take chains off, take rings off. Bracelets may very well get yapped. It’s Week 3 of the 2011-12 Premier League season, and Manchester definitely came the hell off. What else is new?

If Lil’ Fame and ’em isn’t quite your bag,1 here’s another tune The Reducer was humming while watching this past weekend’s Premier League action: “Are You La Liga in Disguise?”

The nefarious and easily citable “they”2 sometimes say that the Premier League’s true value is found in the level of competition, mocking the duopoly on Spain’s top flight by Barcelona and Real Madrid. But, caveats about it being early days aside, it looks like the Premier League’s top four has shrunken by half.

The two Manchester sides, City and United, continued their reign of terror last weekend, racking up 13 goals between them. You know a loss is bad when the defeated manager is asked whether he is going to retire after the game. And that’s exactly what was put to Arsenal’s Arsene Wenger following his team’s 8-2 razing at Old Trafford. Surveying the wreckage of his team, one that was in fairly serious contention for four trophies just a season ago, you can see why Wenger equivocated with his answer.

As beatdowns go, this was a weird, albeit historic one.3 Manchester United manager Sir Alex Ferguson talked about almost having mercy on Arsenal after the game, which sounded a bit like twisting the knife in on his old adversary Wenger. But there seemed to be some truth to the sentiment. The second half had an exhibition-game quality, with a lot of Manchester United players smiling and joking and goals coming off a Wayne Rooney free kick, a backbreaking chip from Nani, and a Rooney penalty to complete his hat trick.

Down south, in North London, the formerly drab and defensive Manchester City brought its Total(ly Expensive) Football to White Hart Lane, where it proceeded to hang five goals on Spurs. Edin Dzeko scored four — a perfect hat trick,4 plus a curling wonder-strike for good measure — as he continued his blistering early-season form. Sergio Aguero added another goal to his Premier League tally, and the midfield partnership of Yaya Toure and Gareth Barry overpowered Tottenham’s Croatian duo of Niko Kranjcar and Luka Modric. The real story, however, was new addition Samir Nasri, who came up with three assists on his Man City debut.

Nasri looked like he had been playing for City for several seasons. Football tactics blogger Michael Cox (a.k.a. Zonal Marking) put up an excellent piece on the Guardian that outlines the freedom with which Nasri played in his first City game versus a comparable performance with his old club Arsenal. Yes, Roberto Mancini is setting out an attacking side that sees wingers cutting in and acting as creative midfielders, fullbacks bombing forward, and strikers breaking wide. No, the top is not still spinning.

Here we come to the part of the show where we grasp at straws. Is the 2011-12 Premier League already a two-horse race? Can anyone stand up to the Manchester duopoly? Well, keep in mind how early it is (caveat alert!). And note that City, especially, has not faced much in the way of competition, downing newcomer Swansea, a troubled Bolton team, and a Spurs side that looks in complete disarray.

Also, if we can harken back to the sepia-toned times of … last season, Chelsea came out of the blocks like a bunch of shape-shifting T-1000s, winning its first three matches 6-0, 6-0, and 2-0, only to self-destruct around Thanksgiving (or what the British call “mid-November”). So don’t abandon all hope, ye who enter here. Aguero still has to go to Stoke on a cold, wet Tuesday night. Who knows what will happen then?5

As a programming note, The Reducer would like to assure readers that coverage of the Premier League will eventually expand outside of the limits of greater Manchester. It’s a testament to how well the two Manc teams are playing that almost all the other Premier League sides look rather stale in comparison. Truly, only Liverpool has looked anywhere near its level, with its comprehensive 3-1 battering of Bolton over the weekend — a match that featured one of the greatest near-miss assists The Reducer has ever seen, with Luis Suarez’s outside-of-the-boot cross.

Off the Pitch: What Have I Done to Deserve This?

Who pep talks the pep talkers? Many Premier League managers, before, during, and after this past weekend’s matches, cut forlorn figures. Spurs’ Harry Redknapp called this period “the worst preseason I’ve had since I’ve been in football.” Newcastle’s Alan Pardew seemed more concerned with what the Magpies front office was up to rather than with his players, saying, “Obviously, we are in a period now when fans are looking for the board6 to bring in players to replace the ones we have lost, as I am.” Steve Bruce was pleading for more strikers, despite having bought Connor Wickham and Ji Dong-won. “We’ve definitely got two players of potential there, but we won’t see the best of either of them for a year to 18 months.”

This has definitely been one of the stranger starts to a season The Reducer can remember. Before the beginning of this campaign, it felt like the football would be crisp and bright and the players would be well rested and raring to go. With no major international tournaments (other than the Copa America and the Gold Cup), this would be the first true summer break many players had experienced in years.

Instead, all this late-breaking transfer activity seems to be unsettling the majority of teams in the league, leading some managers to call for a change to the transfer window. It’s impacting the players’ psyches, too. Tottenham’s seemingly always hobbled captain, Ledley King, talked about how the ongoing, never-ending Luka Modric transfer saga was impacting his team: “We’ve had this issue before with Berbatov.7 It was a similar start for us then. I don’t think it helps in any way. As players you try and get on with the job the best you can. We, as players, want the window to close now so we can get on with the squad that we’ve got and get on with business.”

It’s tough on managers, tough on players, and tough on technical directors, chairmen of the board, and owners. But it’s pretty exciting if you like to read totally unsubstantiated bullshit all day long. Which leads us to …

Goal of the Week:

While The Reducer was watching Norwich and Chelsea play this past Saturday, wondering what setting on the electric razor Chelsea manager Andre Villas-Boas uses to get that perfect, “just back from a weekend of wanton sexual indulgence on Lake Como” beard, Blues fullback Jose Bosingwa snapped us out of it with this long-distance projectile. AV-B has immaculate sartorial sense and won the Europa League/Portuguese Primeira Liga double last season, with Porto, so he doesn’t need The Reducer’s advice. But! After watching Bosingwa’s cannon shot here, and knowing damn well what Alex is capable of doing (find a parapet and duck under it, son!), The Reducer feels like Villas-Boas should set his defenders to stun when they play Man United (a ways off, yes) and its long-ball-shy keeper, David De Gea.

Keep in mind, there is someone on-screen, right now, on Sky Sports news, who is, to paraphrase my favorite Rick Ross tweet, wearing four chains, using three cell phones, and not wearing a shirt, screaming about last-minute business being conducted. He’s probably shouting “LEROY LITA TO POMPEY” or something, right now. So some or all of what you are about to read might be completely moot by the time it runs.

Frimpong, the currently suspended Arsenal midfielder, is becoming something of a cult hero for Gunners fans. His Twitter is a really worthwhile follow, but his profile pic … it says 1,000 words.