Put Chris Webber in the Hall of Fame 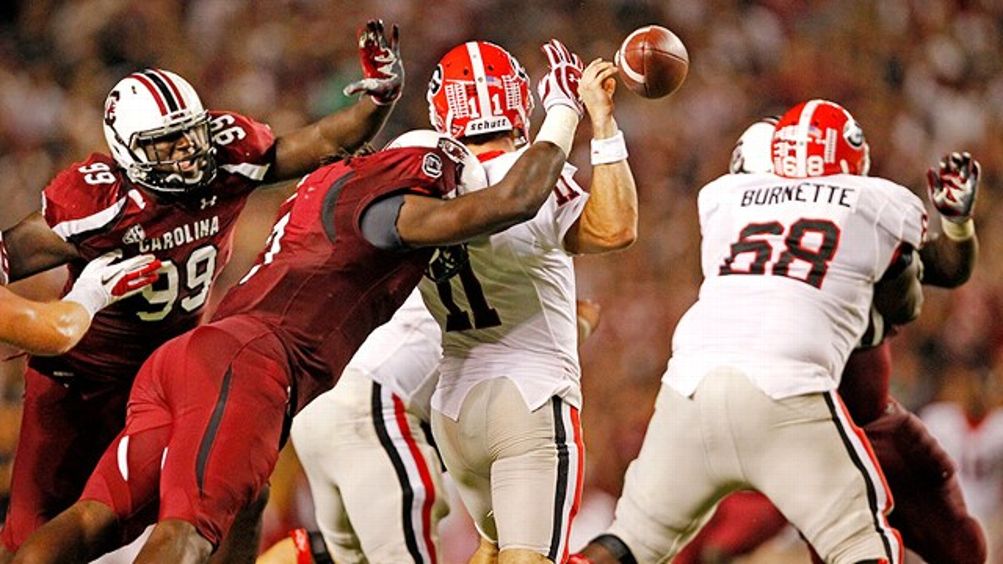 A week ago, we expressed severe misgivings about college football’s typically bland opening-week slate. Those doubts were misplaced. The Tess Effect swooped in to rescue Thursday night; eight teams lost to paid FCS opponents; there were bulldog puppies all over the GameDay set; and we got to see a grown man in a Sharknado costume.

A wiser grouch would have reserved those grumblings for Week 2. In it, by our hasty calculations, FBS football teams will participate in 75 games over a three-day stretch, and 35 of those teams will play non-FBS opponents.1 (Would it be immoral to root for another wave of have-not upsets? It would not. We’ll come back to this.) The Week 2 slate contains two (2) games between opponents ranked in the AP Top 25, and seven (7) games between Top 25 teams and opponents hailing from BCS conferences. Another ranked team will travel to face a squad playing in its second year of FBS competition. (We will also come back to this.) Alabama’s not playing at all, which means we’ve gotten our last look at the Tide before that all-important Week 3 trip to College Station. This is going to be a weird one.

But it might also be a blessing. Five straight days of football is a lot, particularly for the unconditioned fan coming off an eight-month layoff, so think of this next gauntlet as a cooldown period. If your hair seems lank and your fingernails are splitting straight down the middle, consult your doctor to ensure that your immune system is healthy enough for Week 2 consumption.

@HollyAnderson as shutdown podcast put it, it sucks but it’s not baseball.

• No. 6 South Carolina at no. 11 Georgia (4:30 p.m., Saturday, ESPN). Don’t let Steve Spurrier’s August grumblings or Georgia’s August loss sway you too much: These are very good football teams. Once upon a time, Georgia partisans looked upon this game as an early-season irritant in which they would swelter in Athens or Columbia for three hours just to watch the Bulldogs win an ugly, low-scoring bout. Times, they have changed. Not the weather — temperatures always manage to hover around “subtropical blast furnace,” whether the game is in Athens or Columbia — but more points are being scored, and South Carolina’s scoring most of them.

Thanks to the SEC’s free-spirited scheduling protocols, that hasn’t affected the SEC East race much. South Carolina won its first division title in 2010, but Georgia’s won the East the last two years despite losses to the Gamecocks. The effect the shift has had on Bulldog Nation’s psyche, though, is far more significant. Not only are the Dawgs losing to an erstwhile SEC doormat, they’re losing to Spurrier, who relished the hell out of tormenting Georgia teams throughout the 1990s when he coached the Florida Gators. Spurrier’s return to his alma mater kicked off a stretch of Gator dominance in the Georgia-Florida rivalry that Georgia has only now begun to correct; the thought of a similar run by the newly potent Gamecocks is almost too horrible for loyal Athenians to even contemplate.

You might also have caught some chatter earlier this summer involving Aaron Murray and Jadeveon Clowney, but let’s not allow that to become the narrative here, because any person who is not at least a little bit afraid of a figure of Clowney’s size and speed barreling toward him is the worst sort of idiot. It’s smart to be afraid of Clowney. That’s your reptilian complex talking. It keeps you alive. Clowney is poised to be a vexing factor in this game, not just because of his ominous presence on the South Carolina D-line, but also thanks to the Georgia offensive line’s cover-your-eyes pass blocking in Saturday night’s close loss to Clemson. Despite being without his top receiver and playing behind a line that seemed not overly concerned with his personal safety last week, Murray still led an offense that ripped Clemson for nearly 550 yards.

The Dawgs may need that kind of output again this week, as Georgia’s green defense seems enthusiastic to turn this game into another shootout. But South Carolina’s defense, based on the one data point we have available, ain’t Clemson’s, so adjust your Murray & Co. mileage expectations accordingly. And unlike the past couple years, Georgia’s schedule probably isn’t soft enough to keep the Dawgs’ division title hopes from being derailed by a loss to the Cocks.

Think of this as Round 1 of the SEC East playoff. Until someone (Florida?) says otherwise, you might as well consider it a single-elimination tournament. 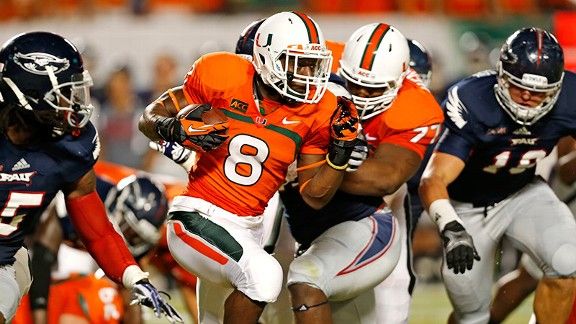 • No. 12 Florida at Miami (Noon, Saturday, ESPN). We had a threatened species joke slotted in here, but Gators-Hurricanes is best symbolized by another Sunshine State trope: the exotic pet turned out into the wild when its owners lose the interest or the means to care for it. We’re drawn to Miami this weekend for a couple of reasons: We won’t likely see another such matchup for the foreseeable future; we want to see how Will Muschamp’s defense will deal with Al Golden’s prized speed racer, Duke Johnson; we want to see what a Miami home game looks like with people in the stands; and we want to see what kind of vision quest a noon game in Miami turns into in the sun-blasted dregs of summer. Mostly, the first two reasons.

.@MiamiHurricanes why are you having a “White Out” 6 days after Labor Day? #FASHIONPOLICE

• Most compelling undercard events: There’s entertainment to be had this Saturday, if you’ve got the right channels and streaming capabilities. In no particular order:

• Most promising nightcap: Arizona is at UNLV, for some reason, and San Jose State at no. 5 Stanford offers both the first 2013 season look at the Cardinal and the 11 p.m. kickoff. But after last week, we are most intrigued by the possibilities of Washington State at no. 25 USC (10:30 p.m., Fox Sports 1).

• Thursday football: Should I bother? Unless you’re a fan of one of the four involved teams, we cannot in good conscience recommend giving these games your full attention. Leave Florida Atlantic at East Carolina or Sacramento State at Arizona State on mute and get some laundry done or something.

• Friday football: Should I bother? See above. Central Florida at Florida International and Wake Forest at Boston College are the only offerings on tap.

• Say, should I gamble on that Hawaii–Oregon State game? UNDER NO CIRCUMSTANCES SHOULD YOU DO THIS. Oregon State just lost to Eastern Washington and Hawaii was seen rocking the elusive FÜNFER against USC, with five points on the Warriors’ side of the scoreboard for the majority of last week’s game. That is entirely too much eccentricity to quantify for a betting-slip decision. ABORT. ABORT. ABORT MISSION.

• Isn’t there ANY other ranked football on offer? One more game! No. 14 Notre Dame at no. 17 Michigan drops at 8 p.m. on ESPN, and after what happened in the fourth quarter the last time the Fighting Irish showed up in Ann Arbor, we’re not looking away for a nanosecond.

We visited with Devin Gardner this summer in anticipation of his first full season at the helm of the Wolverines’ offense. We also spoke with Gardner’s Irish counterpart, Tommy Rees, who, despite his lengthy tenure with the Notre Dame football program, made his first opening-weekend start last week as well. We don’t know how Rees spent every minute of his summer vacation, but after speaking with him a couple weeks ago, we have a guess: in a bus seat next to Crash Davis.

Some highlights from our chat:

Rees on making his first Week 1 start: “It was an easy [transition]. I’ve always carried myself as a leader. I was a little bit more vocal this offseason. Knowing the job was mine helped a little bit with that. You know, being a senior, and being a quarterback, you’ve definitely got to take on that leadership role.”

On how this Notre Dame team changed following last season’s brutal national title game loss to Alabama: “I don’t know if it’s different, but this team is very close-knit. We care about one another a tremendous amount. And I think any time you care about your teammates as much as we do, you’re really willing to sacrifice for them, both on and off the field. We got a great group of guys that are really tuned in to one goal here, and really care about one another.”

On how he’s changed over the course of his collegiate career: “Not a whole lot. I think I’ve learned to rely on my teammates a little bit, if I need to, and the coaching staff and support staff here have been great throughout everything. Just trying to keep a level head and stay focused on what’s at hand, and not get too caught up in what’s going on outside of football, and just really grinding away and coming to work with the right attitude.”

On what he learned riding the bench behind Everett Golson: “Just a broad, different way of viewing the game. Kind of taking a back seat and viewing it as a coach. You get a different view of what’s going on, and what your reads are, and it kinda slows down and simplifies the game a little bit.”

On whether he has any personal statistical benchmarks he wants to hit on the field this season: “Not really. I’m taking it one game at a time, just trying to find a way to win football games.”

Notre Dame media relations staff, we salute you. This was the most coachspeak we’ve ever heard out of an NCAA-eligible player in one sitting. This is a skill many players never master. It’s too early to say what caliber of quarterback Rees will turn out to be in 2013, but he’s already spitting chestnuts like an NFL veteran.

• Wait, what? No, the schedule is correct: That is no. 13 Oklahoma State traveling to the Alamodome to play second-year FBS program UTSA, as part of a three-game series in which the Cowboys will be granted two return trips.

Which FBS program will be the next to pay five or six figures for the privilege of a humiliating home loss? There are three dozen–ish of these contests happening this weekend. Somebody’s gonna get tripped. Somebody’s gonna get rolled. Cheer for these cases with impunity; unless you went to school at one of these places, a high-low upset like this is always the most objectively uproarious outcome.

1. James Madison at Akron. Will be legitimately surprised if this doesn’t happen, actually.
2. Chattanooga at Georgia State. Also confident in this one, although bless the Panthers’ hearts; they’re new.
3. Maine at UMass. Happening, and Maine isn’t even ranked.
4. New Hampshire at Central Michigan. Fire up, Chips fans. Fire up the lawn mower, and don’t even watch this happen.
5. Central Arkansas at Colorado. A possibility this week, but maybe not a possibility a month from now. After Week 1 under Mike MacIntyre, it’s easier to believe in Colorado football than it has been in a long, long time.