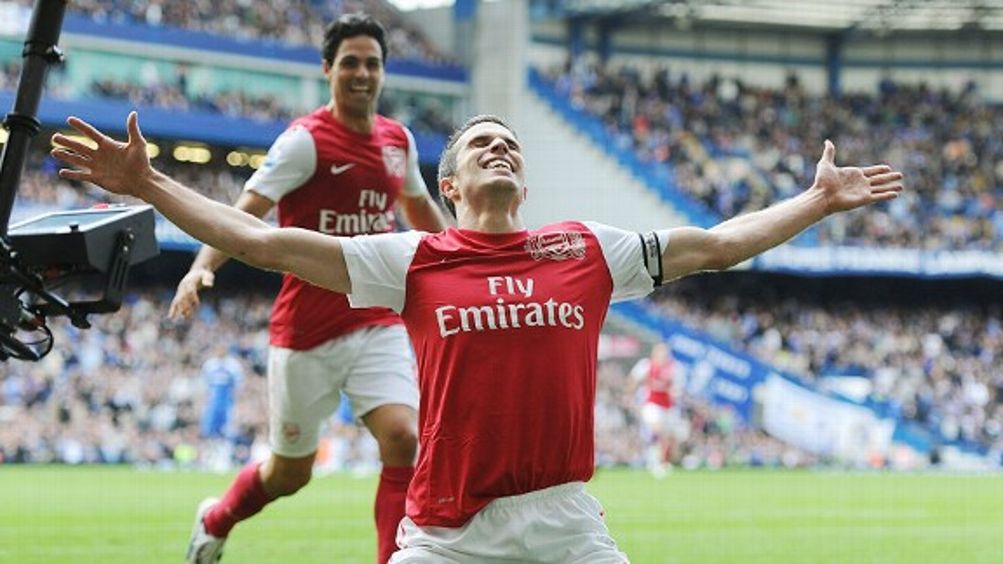 What do you call a match that had eight goals, was played at Red Bull-on-an-IV-drip pace, and featured breathtaking passing movements executed at fast-forward speed? A match that had the heartwarming rise of one of Britain’s best young talents, a telepathic assist from a man with a very strange hairline, a world-class performance from one of the hottest strikers in Europe, The Reducer’s favorite kind of goal celebration, and a cameo from Epithetus, the Greek god of alleged racial abuse? Why, it’s the match of the season, comrades! Arsenal and Chelsea had a throwdown on Saturday, with the Gunners winning, away. 5-3. And it was one of the great football matches in recent memory.

If you combined the first 20 minutes of Wedding Crashers with the last 20 minutes of Goodfellas you’d have an idea of how fun and terrifyingly tense this match was. If you were actually supporting one of these sides you and your raised blood pressure have my sympathies. If you are, by chance, a coach of defensive soccer techniques, it probably had you behaving like Nicolas Cage. If you are Tony Pulis (hi, Tony) you probably shattered your flat-screen with outrage. For anyone else, it was one hell of a Saturday.

These two teams are managed by two of the brightest minds in European football, but Saturday they played like they were being coached by Don Nelson; soon after the match kicked off The Reducer poured his fair-trade coffee onto the Pietra Firma black diamond floor tiles (they came with the 1.5-bedroom Brooklyn apartment, naturally). Coffee would not be needed anymore.

Four minutes in, the gentlemen started their engines, with Chelsea breaking three on … wait, where the hell was Arsenal? Only some quick thinking by Gunners keeper Wojciech Szczesny kept the ball out of the back of the net.

What followed was an incredible, 90-minute sales pitch on why this can be the most electrifying sport in the world and an example of how the instability of teams can sometimes manifest itself on the field.

Chelsea and Arsenal have both, in different ways, had their ups and downs this campaign. Arsene Wenger went on a deadline-day shopping spree to rebuild his side, picking up a big German defender and an aging Spanish midfielder to compensate for seeing his best players book it to Barcelona and Manchester City over the summer. Since the close of the deadline, Arsenal has had a historically bad start to the season, only now beginning to see some consistent results as winners of their last three matches.

The side Wenger sent out to start at Stamford Bridge featured both of those new acquisitions, Per Mertesacker and Mikel Arteta, respectively, as well as a sleepy Swiss centre-back deputizing at right back (Johan Djourou) and a Brazilian national left back in Andre Santos, who seems to employ raising his hand to ask for offside as his main defensive technique.

Chelsea, for their part, were coming off a tough defeat to QPR last week, where they lost Didier Drogba to a straight red card and muddled through another John Terry controversy after the match. The England captain was accused of racially abusing QPR defender Anton Ferdinand, and it seemed like every day brought new speculation and revelations about the incident.

So on one side, with Arsenal, you have a team that’s not at full strength and still trying to get to know one another. On the other you have Chelsea, trying to weather yet another one of those storms the British press are so good at perpetuating. What you got was a game in which whatever game plan there was going into the match was lit on fire shortly after Gervinho (he of the dumfounding hairline) received a practically Cesc Fabregas-ian through-ball from Aaron Ramsey — who played brilliantly and is finally looking like he did before his horrific 2010 leg break — and back-heeled it to Robin van Persie, who slotted it home, past Chelsea’s Petr Cech, tying the game at 1-1 in the 36th minute.

It wasn’t just that the lead changed hands so often; it was the drama with which the momentum swung back and forth. After an Andre Santos goal that pretty much paid for his entire £6.2 million transfer fee (for a fullback, he’s one hell of a striker), Arsenal took the lead with an atypical, bulldozing Theo Walcott goal, only to have Juan Mata unleash one of the strikes of the season to equalize. This prompted Mata to scream something approximating “COME ON” (hopefully with some Spanish profanity mixed in) and wave his teammates on toward the center circle by way of celebration. This is the best kind: No time to slide on your knees and blow kisses to the fans; there’s a match to win.

Chelsea probably would have done just that, were it not for Robin van Persie. And the residents of Mount Olympus. An errant Florent Malouda pass in the 85th minute sent van Persie and John Terry chasing after the ball in the Chelsea half. And from out of the heavens came an invisible hand, one belonging to a pretty funny God who must not like allegations of racism (or men who urinate into pint glasses, for that matter). Because some diving force tripped John Terry as he tried to recover, leaving Robin van Persie to run in, clear on goal.

In 2011, the Dutch forward has scored 28 goals in 27 games played. The Reducer mocked his occasionally exasperated leadership skills the other week, so it’s only right to say that RvP threw the Gunners on his back Saturday. If his second goal on Saturday was a product of some luck, his third was the result of some genius. In injury time, Arsenal caught Chelsea on the counter as the Blues were looking for an equalizer. Arteta, not quite as quick, not quite as brilliant, not quite as able to create space where there is none as the departed Cesc Fabregas could, found van Persie on the left wing and fired a shot past Cech to put Chelsea out of their misery, Arsenal into seventh place, and football fans everywhere thanking the gods for such incredible entertainment.

Fun? We Off That.

So was this we’ll-worry-about-defending-tomorrow attitude contagious? Take it away, Sir Alex Ferguson: “It’s about time we won 1-0.” Yeah, while we were all spit-taking our brunch, Manchester United were singing “Let’s Get Physical” against Everton. Fergie dropped Wayne Rooney into deep midfield, brought back his captain Nemanja Vidic to central defense, and commuted Jonny Evans’ death sentence by starting him despite his catastrophic performance against Man City. United played a tough, compact, honestly rather dull 4-5-1 formation against a tough, compact Everton side. Said Ferguson after the game, “That was the aspect of the game that pleased me most, that and restricting Everton to very few chances. We had to do something about the fact that opponents have been getting too many opportunities to score against us in recent weeks. We knew we had to reduce that number if we are going to win the league, and reinforcing the midfield was one way of doing it.” So basically, fun time is over. This is a shame, because the opening weeks of the season saw United attacking with abandon. And it suggests that despite his obvious affection for his young, attacking lineup — one that features two dedicated strikers and attacking wingers like Nani and Ashley Young — Ferguson knows he might not have the guns to win a shootout, so it’s time to get ready for a siege.

Tottenham’s impressive form continued without a hitch, as Spurs took care of business against Queens Park Rangers, at home at White Hart Lane. After the match, QPR chatterbox Joey Barton called Luka Modric the best player in the Premier League, “by a mile.” It’s a good call (although The Reducer’s got eyes for Man City’s David Silva), but Modric owes some of his success to his midfield partner Scott Parker. The defensive midfielder, who was bought from West Ham at the end of the transfer window, seems to be liking life at Spurs. He’s not required to leap tall buildings in a single bound like he was at Upton Park. All Parker really needs to do for Tottenham is mop up in front of the back four, break up play, and provide outlets for Modric when the Croatian faces his usual double teams.

In any case, Barton wasn’t the only one impressed with Spurs. Tottenham’s own Rafael van der Vaart, who scored against QPR over the weekend, has been sounding off about Spurs’ chances and that of their rivals, claiming Tottenham is better than their North London rivals, Arsenal (“We are better than Arsenal … Are we the best team in London? Maybe“) and casting doubts on Man City as title contenders: “They’re winning games easily and how they played against Manchester United [in the 6-1 derby win] was impressive but they also have the difficulty of a lot of egos, so that could be a problem.” Spoken like a man who is known to storm off the field when he gets substituted!

No, you’re not seeing things; Newcastle are in third place. They handled Stoke pretty easily on Monday, with Demba Ba, a player Stoke turned down the chance to sign, scoring a hat trick. The Reducer is going to enjoy Magpies’ run while it lasts, and applauds Alan Pardew for apparently being one of the most underrated managers in English football (he performed a personnel overhaul, accelerated the gelling of several new players, sets up his team to be tough but exciting to watch, and hasn’t seemed out of his depth no matter the opposition). Still, hard to imagine them not falling back to earth with this dude controlling the purse strings:

The crazy thing about this Mata blast is how it seems to break precisely when it arrives at Szczesny. Also, when you’re done looking at Juan Mata scoring this goal, look at Juan Mata looking at buildings.

“It has been brought to my attention of some ridiculous allegations concerning my celebration of one of my goals. It is totally ludicrous to suggest that my action of brushing my shoulder could be construed as anything else but a showing of joy and celebration. To suggest this meant anything to the contrary is insulting and absolutely absurd as nothing else came into my mind.”

This is van Persie defending himself against morons who suggested that one of his goal celebrations versus Chelsea looked like a Nazi salute. Do these people not watch Jay-Z videos? Brush your shoulders off, RvP.