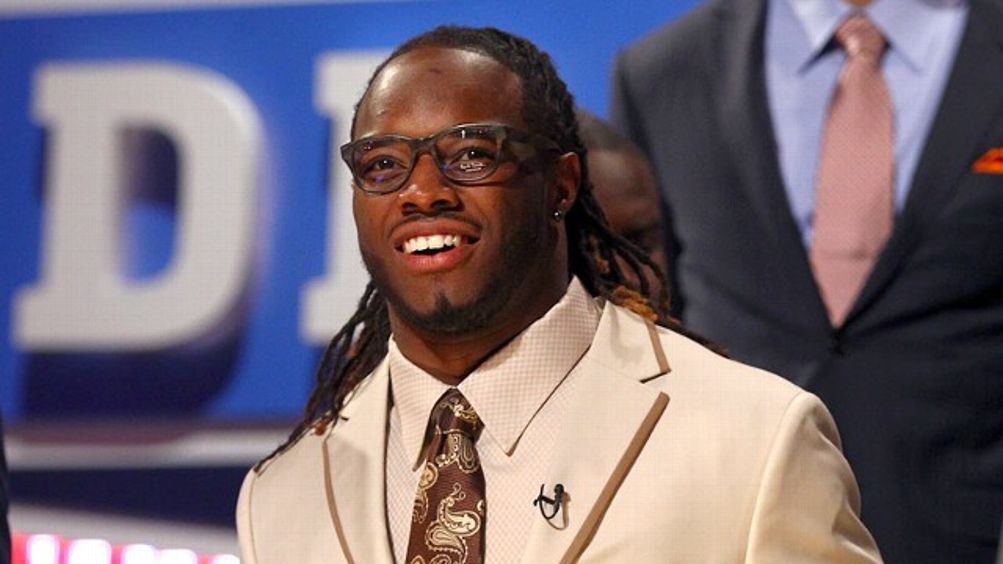 In any American sport, the clothes that men wear on draft day tend to raise the same old questions. Who died? Who’s preaching? Whose prom? You’re carrying a casket in that? The NFL draft started Thursday at Radio City Music Hall and, inexplicably, lasted the entire weekend. Why people complain more about a four-hour Oscars telecast than this 12-hour dude auction I’ll never know. But in the past four or five years, Round 1, at least, has promised to be something to see.

The draftees have stylists now, and it’s almost understood that no player is truly anybody in the league without one. Last year’s NFL draft, with all its snappy tailoring and bursts of color, was a good example of what stylists can do for the broadcast: wake it up and dress the players (a lot of them, anyway) so that they look their age and not their agents’ grandfathers’.

What happened this year? A parade of drooping pocket squares — on Justin Blackmon, Mark Barron, and Ryan Tannehill — and back to pallbearers and aspiring crypto-MBAs. It was as if the future of the NFL studied last year’s NBA draft and decided boring was best. Blackmon was selected fifth overall. He wore slate gray, an orange sherbet dress shirt, and black tie with feint harlequin boxes. His ebony pocket square with ivory piping almost oozed onto the jacket. I felt bad for whoever had that idea. Blackmon spent his college years in the headache hues of Oklahoma State orange. Now he’s stuck in Jaguar teal. I feel worse about that.

Morris Claiborne followed Blackmon. He’s a handsome guy and had the night’s best short haircut. He wore a blueberry suit with red stitching around the lapel buttonhole that picked up the strawberry in his tie. The shirt appeared to be red microstripes. It was basic, and when he gave Deion Sanders a one-armed hug, you prayed that none of Sanders’s taste stained Claiborne’s suit. That’s the NFL fashion equivalent of a groundhog seeing its shadow: If Sanders embraces a player for longer than five seconds, it’s two more years of five-button, three-piece outfits.

Andrew Luck went first overall. He wore a dark-blue suit and a tie with lilac and lavender stripes over a white shirt. When the NFL’s creamy, very huggy commissioner, Roger Goodell, announced what the world already knew to be true (that Luck would be going to Indianapolis), Luck was in the middle of a phone call (a lot of players were). It was too late to ring a stylist. The suit fit nicely, but it was plain, as were the ones worn by Matt Kalil (fourth) and Michael Floyd (13th). Floyd had a nice haircut and nicer suit (dark gray over purple), but after a while you were hoping these stylists had something more they wanted to say with the contrast beyond “our fitting session was Palm Sunday!” Too many of these guys were dressed for Resurrection sermons and Easter egg hunts.

The league’s concussion rule shouldn’t apply to the clothes. The clothes should really be trying for helmet-to-helmet contact. There were a few clashes. Someone, Luck’s mother perhaps, mispinned the Colts horseshoe to his jacket so his lapel remained bunched the entire night. If you believe in symbols, that one summed up the evening: Almost everything was just kind of off.

The gaffe did have the unintended effect of making Luck’s suit interesting. Stage left, plucky Suzy Kolber turned down an opportunity to adjust it during her interview with Luck. Kolber actually had a chance to edit a number of outfits. Robert Griffin III followed Luck in a far snazzier suit that, depending on the light, was with either light blue or light purple. Griffin wore the suit with a striped maroon tie that pretty much stopped in the right place and a white shirt with thick blue windowpaning. Yes, it was “pattern on pattern,” but that’s something you notice only when the patterns are fighting in a civil war.

Griffin’s were clothes you hoped to see at an event that happens at the end of winter: spring, optimism, positivity, comfort, some pop, some intelligence. I even liked the Washington Redskins socks he wore (they echoed his tie). Anyway, the gaffe: Griffin managed to get all the way to Kolber with his tie clip crooked. It’s not her job to fix these things, but ESPN does have a control room, and, apparently, it’s agnostic regarding matters of accidental sloppiness. Isn’t this the real reason to have a stylist? To make sure all that hard work doesn’t evaporate after one overly enthusiastic hug?

Of course, that wasn’t Griffin’s only mistake. His suit was handsome. His hair was something else, and that something else pretty much sums up one of the league’s headaches. Speaking sartorially, hair is killing the NFL.

The 2012 draft was part Hunger Games fashion funeral, part imitation Bronner Bros. International Hair Show. That might sound compelling, but The Hunger Games is a mess of smart ideas that eventually puts you to sleep, and Bronner Bros. feels like it lasts as long as the draft and is usually only as good as its most flamboyant entrants. No imitation can top its melodrama and pyrotechnics.

The hair at the draft this year should have been a cause for commotion. We spend a lot of time talking about morality and Michael Vick, God and Tim Tebow, head injuries, scandalous bounties, and how Eli Manning might be Serena to Peyton’s Venus. I haven’t heard much about how T-Pain’s hairdresser took over the NFL. If one player’s dreadlocks are swept up into a nest or bundled into a hive, it seems like everybody’s are. Clay Matthews and Troy Polamalu are one Atlanta-born stylist away from being Bronner Bros.–ready.

Trent Richardson (third) wore brown perhaps in tribute to his new team (he’s going to Cleveland). It was coffee with Coffee-mate: tan with great dark-brown piping on the lapel and around the bottom. He looked good. (He must have been so excited about everything that he forgot to remove the sticker from his presumably nonprescription Paul Smith glasses.) But his hairline was straight and sharpened while his dreadlocks were tied back into a pair of ponytails that hung over lots of close shaving. He was going for two things that didn’t want to have anything to do with each other.

Dontari Poe went 11th, and his dreadlocks could have been parted by Moses and cast in The Phantom Menace. Dre Kirkpatrick (17th) wasn’t quite what I wanted, but at least it was something. He wore a white suit with dorsal-fin lapels over a red vest over a white shirt and a white tie with red dots and a white-and-red pocket square that begged for water. His plaits swung across his face. If Lil Jon ever opened a prep school, Kirkpatrick looked like he was ready to receive a diploma.

Stephon Gilmore is the one man who knew what to do with all that hair. He opted for a simple, classy suit, in catchy blue. It had modest lapels and was worn over a light-blue shirt with a skinny brownish argyle tie that appeared to be wool. His dreads were swept back and gathered in a way that brought out the breathtaking geometry in his face. Gilmore was going to Buffalo, where one only hopes he’ll take all of his style. This is to say he looked cool. He looked modern. He looked like he wears that suit every single day. I’m sorry nobody removed the loose string he had on his sleeve. But that didn’t matter. He was solving a question not enough men openly ask. Seriously: How do you take your dreadlocks to work? Like this.