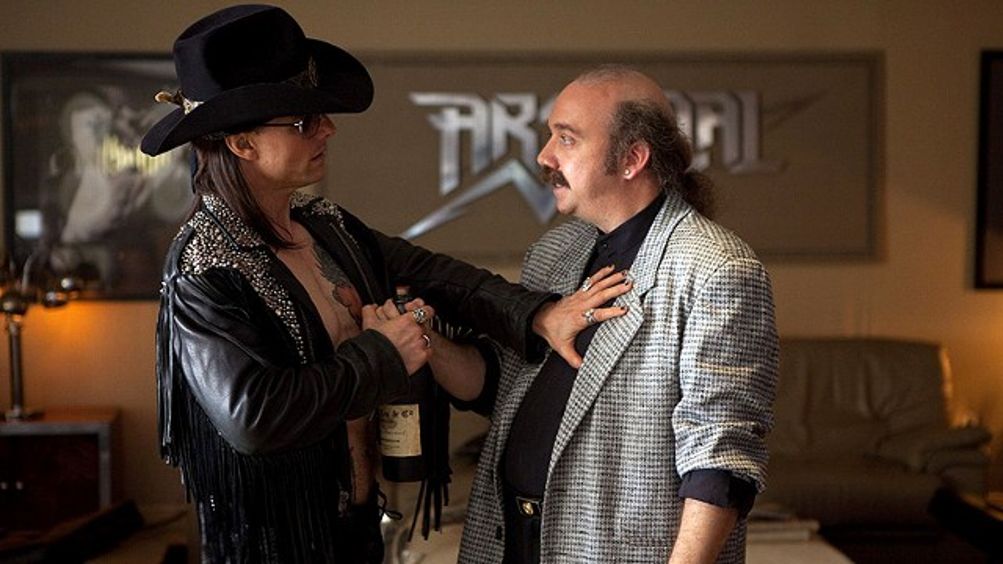 1. We as summer moviegoers should probably be grateful for Rock of Ages, the first big film of this blockbuster season to signify nothing other than good old-fashioned Hollywood narcissism — no knotty questions about the soupy, staple-y origins of man and xenomorph; no referendums on anyone’s increasingly perplexing career; no hyena laughing about the misfortune of the hubris-salted studio executives who greenlighted John Carter. Just Tom Cruise in leather pants, with a tattoo of a heart above his actual biological heart. It’s the platonic ideal of summer cinema: You are going to go to the theater, and people are going to entertain you inside of it.

2. Well, “entertain” you, anyway. Rock of Ages, adapted from a jukebox musical named for a Def Leppard song, is pretty much the “Cee Lo Green Presents Loberace!” to the rest of the cinema marquee’s Soul Food — the ersatz, Vegas version of a Hollywood film, with 10 lead actors instead of one, and Foreigner songs in lieu of a plot. It’s about two young lovers trying to make it on a stage-set version of the ’80s Sunset Strip, with Alec Baldwin as their lank-haired boss and benefactor and Cruise as the dead-eyed, be-codpieced rock star they both aspire to become. As Rock of Ages is a musical, most of this information is conveyed via song — in one crucial scene, our two lovers converse by trading lines from Extreme’s “More Than Words” and Warrant’s “Heaven,” which is unsettling. More on this in a second.

Prometheus and the Weirdest Summer Franchise

Snow White and the Huntsman and Kristen Stewart

Men in Black III and the Barely Average Blockbuster Season

Sacha Baron Cohen’s The Dictator: Requiem for a Comedian

3. First, Tom Cruise. You hear him right away, singing “Paradise City” over the opening credits. His pitch-perfect vibrato is basically the devil’s music — the hair on the back of my neck and arms actually stood up and shook when he nailed the falsetto on “Wanted Dead or Alive.” Cruise’s intensity in this film is such that there is no way it wasn’t terrifying to be in the same room as him while they were making it. His character is called Stacee Jaxx and Jaxx is the front man of Arsenal, a band we’re supposed to read as a sort of Poison–Guns N’ Roses hybrid. Jaxx never wears a shirt and travels everywhere with a monkey named Hey Man, which apparently was Cruise’s idea, to give the monkey a name that is the most succinct unit of rocker speech.

4. There are Hollywood comedies, which are made all the time, and then there are movies like Rock of Ages, in which Hollywood people try to be funny. Think of Les Grossman, the balding, profane studio executive played by Cruise in Tropic Thunder, in which the entire joke is that Cruise is balding, profane, and playing against type. Look at the famous man dance to Ludacris! Amazing!1 This type of humor requires an enormous investment in the brand of Tom Cruise or whoever — since the joke comes at the expense of that brand — an investment that seems cruel and narcissistic to ask audiences to share. And Rock of Ages, which was written in part by Tropic Thunder screenwriter Justin Theroux, is pretty much predicated on this kind of joke — there is no other reason for the script to call for Alec Baldwin and Russell Brand to awkwardly kiss, or for Paul Giamatti to sing a few killer bars of Whitesnake’s “Here I Go Again.”

5. Rock of Ages is directed by Adam Shankman, the man who cast John Travolta as a woman in the not-entirely-watchable-but-still-sneakily-subversive 2007 remake (of a remake) of Hairspray. That movie has Zac Efron as a variety-show dancer who leaves his beauty-queen girlfriend for an overweight integration crusader and Amanda Bynes in a life-imitates-art turn as an outspoken devotee of black men. Shankman’s one of those guys who finds gentle ways to nudge Hollywood to places it doesn’t often go; he’s described, for instance, his goal with Rock of Ages as “doing a musical for straight guys.” (I can’t decide whether that’s mildly progressive or insanely conservative — it’s certainly a good description of The Book of Mormon.) Shankman doesn’t seem to have much of a filter. Here he is explaining the character of Justice, played in Rock of Ages by Mary J. Blige: “It’s you know, that wise black woman who’s always there to give us some help. I said, you know Mary J. Blige is the Queen Latifah character. You know, she, her voice in this movie is, she just gives it this incredible warmth, and she’s just this person who blows out of the screen.” (Queen Latifah, by the way, plays the Queen Latifah character in Hairspray.)

6. Why is Mary J. Blige here, anyway? Rock of Ages definitely has that Ocean’s Twelve, we-shot-this-movie-at-Clooney’s-villa-on-Lake-Como vibe, where you get the impression that part of the reason this got made is that a bunch of famous people wanted to hang out and play comedic versions of themselves and perhaps hear Mary J. Blige’s voice up close. Even the casting seems informed by and illustrative of the Hollywood pecking order. Dancing With the Stars‘s Julianne Hough and the young Mexican actor Diego Boneta play the two young-lover leads — they are by far the least famous two people in this movie, and they spend most of its running time, plot-wise, either trying to ingratiate themselves with their elders or stripping down to their undergarments. In this, as in the Tom Cruise is world’s biggest rock star Stacee Jaxx sense, Rock of Ages is in every way a movie about the people who star in it.

It makes you feel like the destiny of every song you ever loved is to become a sock puppet in a movie musical starring Tom Cruise.

7. Well, that and ’80s hair metal. Rock of Ages attempts to appeal to the childhood nostalgia of audiences in the 25-54 age demographic in the same way that Battleship and MIB3 and any number of other summer blockbusters spawned from preexisting brands do, though the ongoing assumption that people will just continue to care about Journey until the end of time remains chilling. More chilling is the way Rock of Ages treats the music of that era, which is to divorce it from any sense of context or intended meaning and instead use it to play Mad Libs. I have no particular reverence for Starship or Twisted Sister, but the scene in Rock of Ages in which two mobs face off by singing “We Built This City” and “We’re Not Gonna Take It” at one another is somehow deeply depressing. (Imagine a version of this film in which a depressed group of Nirvana devotees chanting the lyrics to “Lithium” are brought back from the brink by a chorus of people singing LCD Soundsystem’s “All My Friends.”) It makes you feel like the destiny of every song you ever loved is to become a sock puppet in a movie musical starring Tom Cruise.

8. Rock of Ages really puts into perspective Hollywood’s obsession with sequels, toys, and franchise properties. Sure, it’s sort of a conceptual bummer that they’re already rebooting Spider-Man or still making Alien films 30 years after the first one. But at least none of those movies attempts to make a brand out of 10 years of human cultural history (“Nothin’ but a Good Time”).

9. Although I did enjoy Paul Giamatti’s drain-clog ponytail: 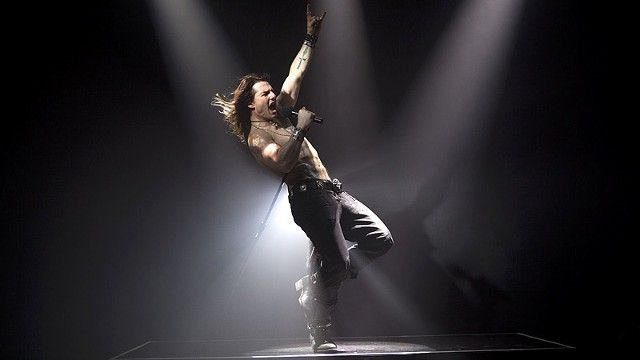 10. Rock of Ages ends in a deeply semantically weird way. (Spoilers ahead, I guess.) Early in the film, we see Boneta’s character play for Hough the first verse of a song he’s written that’s supposedly inspired by their love. The song is “Don’t Stop Believin'”; later, in Boneta’s big-break moment, he performs the song onstage, in the process catching the ear of Cruise’s Jaxx, who in turn makes the song the centerpiece of his newly launched solo career. Rock of Ages ends inside an arena, with Cruise now singing “Don’t Stop Believin'” as his own hit and bringing out Boneta in front of the audience to thank him and credit him with writing Journey’s song. As the crowd roars, the screen fades to black. Rumors of Jaxx’s murder are unconfirmed at this time.

Zach Baron is more of a Public Enemy kind of guy. Find him on Twitter at @xzachbaronx.