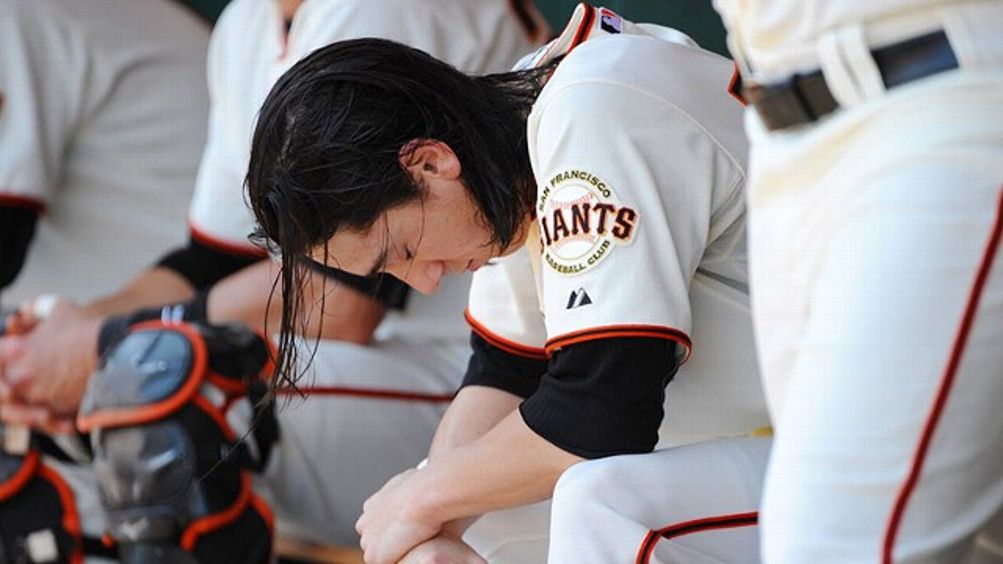 There’s a special agony to watching a pitcher in decline. Like baseball itself, it can be tedious and slow, as though you’ve wandered off the clock of official time into some chopped-and-screwed nightmare of crooked numbers and blood-stanching meetings on the mound. A delivery that once seemed so fluid and effortless suddenly becomes an occasion for stress, a mystery with no answer1 — and it’s only the fourth inning. Experts begin parsing the distinction between “throwing” and “pitching,” the awestruck descriptions of raw power turn into an old-timey romance of finesse and craftiness, and suddenly you strain to hear the pop of a fastball from the bleachers.

This sense is especially pronounced when the pitcher in question has always looked slightly out of place in a big league uniform. Over the past few years, Tim Lincecum has gone from cult hero to one of baseball’s most absorbing stars, owing to his slight, unassuming frame, a freakish, much-mythologized delivery, and, most of all, his seemingly chill demeanor.2 Lincecum is an inch or two shy of 6 feet tall, but he seems much smaller. It’s the way his baggy uniform and long hair flap on a breezy day, the acrobatic, Juan Marichal–esque way he curls up and then vaults into that exaggerated stride. In the wake of the outsize, power-obsessed steroid era, he has returned a sense of quirk to the game, even if he’s done so by merely not coming across as God-beholden or humorlessly professional. Of course the pot charge didn’t hurt either. Nor the bow tie.3

This is the season Lincecum watchers have long feared. He was famously passed up by nine teams — including his hometown Seattle Mariners — in the 2006 draft because of his size and an unorthodox delivery that had been concocted by his mechanics-obsessed father.4 Many doubted whether his body could sustain that live arm, but beyond a rough August in 2010, he’s rarely struggled. He breezed through the minors and joined the Giants in 2007, becoming the first player ever to win the Cy Young in his first two full seasons in the majors.

But heading into this All-Star break, Lincecum was, by some metrics, not only one of the worst pitchers in the majors, he was putting together one of the worst seasons of all time. His starts replaced Barry Zito’s as the ones most feared by Giants fans, and that is saying a lot. His fastball this season has rarely cracked 91 mph after averaging 93-94 the past few years, and there have been an alarming number of curves that have needed two bounces to reach home plate. Despite this, the Giants have been able to stay at or near the top of the National League West.

The two words most often applied to the team these past few years are “torturous” and “weird.”5 The surplus of personality is necessary, since it’s that camaraderie that keeps things OK despite the fact that it occasionally feels as though the Giants’ feeble batsmen are trolling their elite pitchers. Early in his career, I kept waiting for a frustrated Lincecum to storm off the mound and launch into some epic tirade about the very-opposite-of-“sweet” level of run support he was receiving. Maybe playing for the Giants has finally taken its toll.

A more reasonable explanation for the Freak’s funk is his weight. He showed up to spring training this season having dropped about 20 pounds, down from 196 to 175, a response to feeling soreness in his knees at the end of last season. “I’m still not crushing vegetables by any means,” he said in a preseason interview about tacos, explaining that his regime of diet and offseason exercise were based more on intuition than nutritional science. He’s tried to add some of that weight back during the season to regain his velocity, and perhaps these fluctuations have had unforeseen effects on his mechanics.

Lincecum’s midseason adjustments have been born of pragmatism. He’s been able to make do, salvaging his season with some laborious, occasionally fluky outings. Even without anything resembling his best stuff, the Giants have won four of his last five starts. Last Wednesday he faced off against the Mets’ Matt Harvey, the latest bright young thing with an endless supply of heat rocks, in one of those capricious midseason scheduling coincidences. This was a clash of styles, the tiny Lincecum’s smoke and mirrors versus Harvey’s generically “power pitcher” 6-foot-4, 225-pound frame. Lincecum mixed his pitches wisely, and his seven innings — capped by an Xbox-status curve to get David Wright looking — were a masterful example of poise and execution prevailing over power.

On Sunday against the Colorado Rockies, Lincecum was nearly knocked out of the first inning. He was awful, throwing 36 pitches (including one that caught catcher Hector Sanchez on the bounce, rendering Sanchez’s throwing hand temporarily numb), giving up two walks and two hits. But he survived the first and gave up only one run, eventually eking out six tough but effective innings for the victory.

Even more so than the recently acquired Hunter Pence, it is Lincecum who is the key to the Giants’ postseason hopes. His swagger and “Fuck yeah!” looseness set the tone during their 2010 run. “We get caught up in the fact that as a pitcher we’re the center of attention, we’ve got to control the pace of the game and when we can’t control things it upsets us,” he recently explained, revealing himself to be a bit more of a hypercompetitive control freak than his stoner fan base might assume. It seems like his adjustments have mostly been mental, with Lincecum realizing that he was “slicing unneeded pieces of clay away from the masterpiece.” During a recent, nightmarish outing, he turned to fellow starter Ryan Vogelsong and confessed, “I don’t know how not to be mad.” It was inevitable that Lincecum would eventually lose some of his velocity. But despite some depressing outings — the kind where you start to notice the lines on his face — this season has shown his resilience and willingness to adjust. The question is, will his body continue to allow it?

There’s something thrilling about every young, carefree flamethrower or backyard prodigy and the way they allow us to put off reality, if only for a few innings.6 But it’s far more interesting to watch talent in transition, adaptation, and reinvention, the mastery of craft. It’s been a challenging and mysterious season for Lincecum. “He keeps trying to find it,” Giants announcer Duane Kuiper dulcetly observed on a recent night. Maybe “it” was lost to time. In reality, Lincecum’s merely going through the same thing most people do in their late 20s: He’s getting older, and he knows it.7 When asked what motivates his diet, he remarked that it was a change brought on by “coming to terms with my mortality.” By looking at a passenger’s seat worth of fast food and feeling a preemptive stomachache. By wanting to feel as limber and fresh as he did a few years ago, when soreness and self-doubt were everyone else’s problem. The Freak has never been more similar to the rest of us.