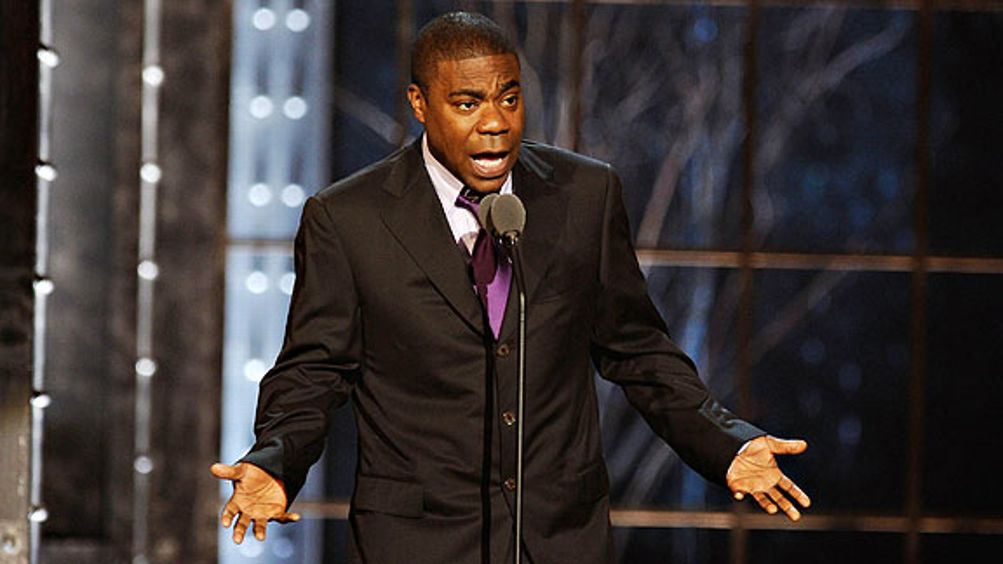 About a week ago Tracy Morgan’s homophobic riff-slash-rant at a stand-up gig created a ruckus. The reviews were worse than Spider Man on Broadway.

“Mean-spirited” — Olivia Munn
“Tracy can suck my …” — Dan Savage
“Can I go to the Tony awards without getting my ass kicked?” — Chris Rock

All told, he probably lost some Twitter followers, and the boundaries on anti-gay humor in the it-gets-better era. Still, if you already knew Tracy Morgan, likely it didn’t budge the opinion-meter too much. Crazy insane or insane crazy.

See, everyone knows Tracy, but no one really gets Tracy; the loose cannon from Brooklyn is one of our prolifically chatty personalities and dominates in the war to leave others speechless. He’s ethered the whole A-list of professional smooth-talkers: burner-at-the-side-of-your-dome, formerly unflappable Jon Stewart; get-out-of-my-throne, once-unstammerable Terry Gross; eat-this-blast-of-flabbergast, previously unflabbergastable Conan O’Brien. Tracy Morgan leaves them all shook. And after throwing maverick elbows to clear space like Dirk in the high post, he’s also down to give up the body like Brian Cardinal and draw the charge and shift momentum. Clean or dirty (mostly dirty), anything for the laugh. That’s why hoods respect him, hipsters adore him, and even pedigreed white boys literary types such as New Yorker editor David Remnick don’t just like him … as Tracy would say, it’s all loooove.

So, yo: Anyone can see Tracy Morgan has layers on layers, like a pregnant onion. Let’s grab some three-ply with Aloe and let our eyes feel the burn as we decode the Marshall McLuhan of mixed emotions.1 Behold: The Nine Circles of Tracy Morgan, in ascending order of entertainment value.

Circle 1: Tracy Morgan as Professional Hell Raiser
This is the stage we’re all currently in. Tracy Morgan’s balloon has lost its string. Even Liz Lemonade was forced to put on her Bossypants in protest. Hell is a misguided rant hung over your head while the blog-media hits accumulate like exponents. The aftershock effects of a hurt locker like this (hint: the media is the suit, the story is the bomb) can linger for years. Little is worth the price of engagement.

Bottom line: Tracy Morgan is one in a long line of fearless shock comics. The art of shock-comedy constitutes sizing up the moral consciousness of the collective public, and finding the perfect space for a punch line that just crosses the line. Do it right and you end up in the company of controversial legends like Lenny Bruce, George Carlin, and Redd Foxx. But play the cards wrong and you end up in racist rehab with Michael Richards.

Circle 2: Tracy Morgan as Professional Apologizer
My bad, this is the stage we’re currently in. The Media Apology Tour, also known as the most boring part at the Celebrity-Bullshit Olympics — Tracy Morgan is an old pro at events like the 100-interview relay, the free speech javelin throw, and the apology floor exercises (back handspring into the truth, catapulting off the moral high ground, stick the landing). Tracy is always quick to apologize. Dude’s like the fast food of apologies. Have it your way. Every day. McMea Culpa to go. #overabillionserved.

Circle 3: Tracy Morgan as Professional Crier
A couple of years ago, when Tracy was promoting his memoir I Am The New Black, we pretty much lived in Stage 3. From Oprah to NPR to plenty of interview stops in between — T-Mo had a little TMI for everyone about the horror that was his growing up in the Coney Island projects. Man, I haven’t seen that kind of crying since ‘Nam! Can you imagine just going bookstore to bookstore, blog to blog, stranger to stranger and just crying about your childhood constantly? No, you can’t. You can’t imagine that. Stop imagining. Let’s just shut up and toast Tracy Morgan’s Epic Vulnerability, right now! I’m not trying to front on all you droopy eyed, snarky girl-bloggers out there, but 30 Rock and SNL may have robbed us of the greatest emo-blogger of all time!

(Note: If crying gets out of hand, proceed directly to Circle 2, and if it continues, to Hell.)

Circle 4: Tracy Morgan as Professional Meme (or, “Someone’s getting pregnant!”)
This used to be a really fun circle! Did you imagine the day when you could say, “Yo, middle school pregnancy is some funny shit”? But a joke premised in pure nonsense doesn’t preserve this long. Over the years of repetition and awkward, overzealous, make-you-want-to-go-back-to-Africa-even-if-you’re-not-black usage of this once-flighty meme has turned a ditzy one-liner into social commentary and an obligatory lesson on the Moynihan Report. Pregnancy in the black community is not the word to play! Please take the escalator down to Circles 3, 2, 1.

Circle 6: Professional Actor
First of all, we’re very happy to plug the movie 30 Years to Life. I hazard a finger-wag and proclaim you unfit to comment on Tracy’s acting chops without seeing this movie! 30 Years features Tracy playing the role of a 30-something stand-up comedian, and came out before he got the 30 Rock break. It’s no Will Smith Six Degrees of Separation, but it’s refreshingly watchable/charming, obscure, and now on Netflix instant; so, problem solved.

True, the bulk of his filmography is meh. But on TV? Tracy Jordan on 30 Rock balls like Dirk in the 2011 playoffs. Tracy’s Jordanesque creation rivals Kramer, Homer, Cartman, Ari Gold, Anthony Weiner, and any other perfectly drawn male caricature of the past 20 years. Dude is method, improv, and theater of the absurd all at once. Juggling counts for something.

Circle 7: Professional Comic
Tracy is a purebred Ghetto Hood Humorist. And Ghetto stuff rarely crosses over. But this humor cuts right to the risible essence of the Black experience in America. Riffs about being an A-list celebrity and the Burger King girl throwing a couple extra Whopper Jr’s in the bag for free. The dissonance you hear is the sound of Tracy Morgan’s belly, erm, comedy.

It’s interesting that Tracy hasn’t been able to elevate his stand-up set to Chappellian or Rockian levels. Both Chris and Chappelle seem to have something larger to say, and desire to use the medium to say it. With Morgan the medium is us. If Chappelle and Rock paint on a cave for us, Tracy Morgan paints us.

When Tad Friend profiled Steve Carell in the New Yorker he said comic actors come in three flavors: “The wild man who creates chaos (Jim Carrey, Sacha Baron Cohen); the straight man who tries to repress it (Ben Stiller, Paul Rudd); and the devil-may-care man who savors it (Owen Wilson, Vince Vaughn).” But he’s missing the artful absurdists like Morgan, Zach Galifianakis, or Sarah Silverman. Talking to them is like keeping score a game of intellectual 52-card pickup.4

Circle 9: Tracy Morgan as Professional Rorshach Test
The most broadly appealing circle — since, as Friedrich Nietzsche’s inner Black comic once said, “Nothing succeeds if prankishness has no part in it.” Tracy is the human Rubik’s Cube with all black pieces, daring you to mix it up. By the time we get to the surface we realize Mr. Pregnant’s got enough going on to petition for a full-time Chief of Hermeneutics position down at NYU. A ridiculous petition, no doubt. One which reminds us life can take you to hell and back. That there will be crying, for sure. That it might be complicated, difficult, and — LADIES, MY MERCEDES — unpredictable. But it can always be funny.