Can Arkansas Bounce Back Against Alabama? Not If Barrett Jones Can Help It 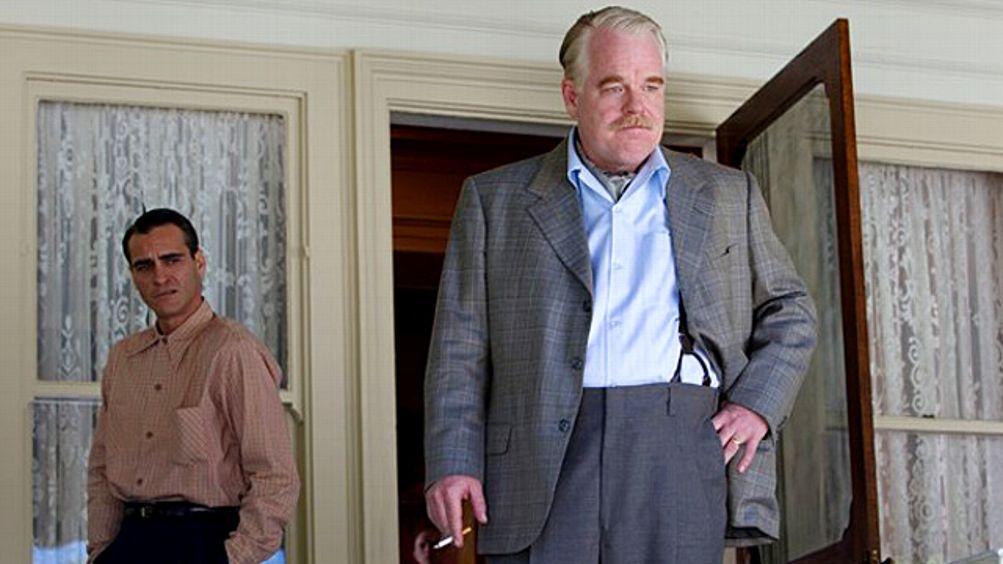 “I don’t know if there’s anything wrong with me because I don’t know how other people are.”

Some movies you walk out of knowing everything there is to know before the credits finish rolling; some movies you wake up in a cold sweat 14 days later and can’t remember how you got home, let alone exactly what you thought of what you saw. Paul Thomas Anderson’s The Master is the second kind of movie. It probably says something that I’ve been dejectedly convinced for the past two hours that Jeffrey Wells’s review of the film is definitive and cannot be topped, because Jeffrey Wells’s review of the film was a 137-character Twitter post that read, in full: “The Master” rips its shirt open and shouts at the audience, “I am a bear! We are ALL bears! And you will not tame me! Accept me or go.” So yeah. Just being honest.

Paul Thomas Anderson is arguably the greatest American filmmaker under 50 presently working,1 so it’s not like we couldn’t guess something heavy was coming. In retrospect, the secrecy that has surrounded The Master since its inception (April New York Times headline: “Filmmaker’s Newest Work Is About … Something”) seems laughable: We knew what it would be about. Like Anderson’s first five films, it would be about fathers and sons and the dissolution of the nuclear family under the onslaught of capitalism. It would be about the need to believe and inevitable abuse by others of that need. It would be about the radical loneliness in all of us. About how relief for that loneliness is there, but only sometimes and not always when you need it most. About how, as the book says, we may be through with the past, but the past ain’t through with us.

More specifically, we knew that The Master would be “about” Scientology, in the same way that There Will Be Blood was “about” oil — which is to say, mostly as a setting and somewhat as a metaphor. In the film, Philip Seymour Hoffman plays an L. Ron Hubbard surrogate by the name of Lancaster Dodd, founder of The Cause, who leads a modest flock of true believers with a free jazz scatter of mystical platitudes and impromptu speeches about dragons and the otherworldly origins of man. Joaquin Phoenix plays the newly discharged World War II naval serviceman Freddie Quell, a Denis Johnson character come to life, veins overflowing with alcohol siphoned from torpedo hulls and inchoate self-hate, unknowable even to himself. Together they form the kind of cracked, contingent second family that has been a hallmark of Paul Thomas Anderson’s films since his first, 1997’s Hard Eight. And that’s the movie, basically: Like the rest of Anderson’s films, it moves gently forward in time, but the real direction of The Master is inward, toward whatever rotten thing it is inside these two men that has twisted them so.

There’s a neat inversion that happened in Paul Thomas Anderson’s career, right around Punch-Drunk Love, where he went from making big, noisy, sweeping films that were, in the end, delicately personal — even lonely — to making quiet, intent, narrowly focused films that, through technical mastery and sheer will, came to speak to whole traumatic chunks of American history. The Master, without ever taking its eyes off its two main characters, manages to tell much of the sad postwar story in this country: the demise of its communal ideals; the rise of a kind of spiritual cynicism that substituted obedience for faith; the unrelenting individual isolation that ensued. Hoffman’s Dodd is a charismatic spirit-huckster selling community and certainty to men bereft of both. He and Phoenix’s Freddie at once represent one more iteration of Anderson’s most enduring preoccupation — a foster father, an adopted son — and something bigger: Whatever’s true about their sinister and viciously dependent relationship is true for the literal millions of other existentially shattered Americans we never once see in Anderson’s pristine, 138-minute, 70mm film.

George W.S. Trow had this idea that one of the most basic and depressing conditions of modern life was that you were either deeply, profoundly alone, or you were watching TV for comfort and community and thus partaking in the same thoughts, feelings, and needs as everyone else. There was no humane or satisfying middle ground. Trow wrote: “The middle distance fell away, so the grids (from small to large) that had supported the middle distance fell into disuse and ceased to be understandable. Two grids remained. The grid of two hundred million and the grid of intimacy. Everything else fell into disuse. There was a national life — a shimmer of national life — and intimate life. The distance between these two grids was very great. The distance was very frightening. People did not want to measure it.” Paul Thomas Anderson is one of the very few artists to come along in a very long time able to bridge the gap between the two grids — to be able to measure it and sometimes even close it. It’s what makes him great.

Early on, though, he couldn’t quite do it; the individual grids stayed individual. Anderson’s first few movies trace the same handful of psychic concerns at louder and louder volume. Hard Eight introduces the first of Anderson’s many improvised family units, here drifting through small-time life in Reno — hollow-eyed, Camaro-driving Gwyneth Paltrow, John C. Reilly in the earliest version of the dim-witted, bighearted, karate-practicing character he’d go on to play in the next two Anderson films, with Philip Baker Hall’s Sydney as their guardian angel and surrogate dad — but is basically a character study (the film’s original title was Sydney). So, for that matter, is Boogie Nights, ostensibly about the rise and fall of porn’s golden age in the San Fernando Valley but just as much about the rescue of one otherwise doomed kid “blessed with one special thing” by the dysfunctional but fundamentally nurturing crowd he falls in with.2 1999’s Magnolia was Anderson’s attempt, in his words, to “put this epic spin on topics that don’t necessarily get the epic treatment” — e.g., hapless Los Angeles beat cops and child-abusing game-show hosts and pickup artists who speak movingly about winning the battle of the bush — and the film’s poster is probably on the wall of some studio executive’s office as a cautionary example of why you should never, ever give final cut to young, possibly under-the-influence3 Hollywood phenoms. It’s a magnificent and ridiculous film that features one of the all-time great Tom Cruise performances as Frank T.J. Mackey, the Mark E. Smith of motivational sex speakers, and eight other leads all crossing paths and echoing thematic concerns across a biblically frog-afflicted Los Angeles. But again, fathers and sons: It’s a movie in which nearly every main character has been let down badly by those who are supposed to care for them.

Phoenix and Hoffman and Amy Adams should all be nominated for Oscars. Hoffman should win one. And there are four or five scenes in the movie that are as good as anything you’ll ever see in a theater.

Punch-Drunk Love is the shortest and least obviously ambitious of Anderson’s movies, a hermetic little portrait of a deeply damaged man, the family that made him that way, and the sledgehammer-to-the-face kind of love that ultimately restores his citizenship in the ranks of humans who can go out to dinner without becoming enraged and ripping a bathroom towel dispenser off the wall. But there’s a hint of something broader afoot, too — one of the reasons the pudding-scamming main character here is so sad is because he hasn’t yet figured out how to care about something that exists outside of a frequent-flyer miles promotion. And all these concerns about the distant possibility of happiness in a consumer society are way more overt in There Will Be Blood, a movie that contains the whole bloody rise of modern capitalism in one man’s body-strewn rise to empty fortune and despair — a movie that in fact ends with the drunken, isolated representation of successful American enterprise clubbing Paul Dano’s symbol of turn-of-the-century frontier spiritualism to death with a bowling pin.

You would not have picked Anderson, circa Magnolia, to be the director with the most to say about just how much we lose to modernity and the civilizing impulse. But he’s somehow become that guy.

So what do I think about The Master? I think it’s one of Anderson’s best and least lovable films to date. That it’s both something pretty close to a masterpiece and surprisingly hostile to the abundant narrative pleasures contained in previous near-masterpieces like Boogie Nights. That it’s even colder and less immediately engaging than There Will Be Blood, a movie that begins with 15 minutes of near silence.

I think that it’s astonishingly, heartrendingly beautiful: the blue-and-white ship’s wake the film keeps returning to; the vision of Phoenix’s Freddie sprinting across a barren cabbage field as the light comes up in the sky; the way Freddie watches Dodd carefully but hungrily, like a man contemplating the arrival of his own slow and not entirely unwelcome death. That Phoenix and Hoffman and Amy Adams, as Hoffman’s unmerciful wife, should all be nominated for Oscars. That Hoffman should win one. That there are four or five scenes in the movie that are as good as anything you’ll ever see in a theater.

I think that The Master is a hypnotic film about hypnotism. That it’s Anderson’s most sophisticated and depressed meditation on authority yet. That buried in here, among all these often-monstrous characters, is a sincere and thoughtful and even optimistic response to There Will Be Blood‘s famous “There are times when I look at people and see nothing worth liking.” That I’m going back to see it again this weekend. That I’m positive I’ll still be thinking about it a month from now. That if this is what it means to be a bear, then I’m a bear and so be it.