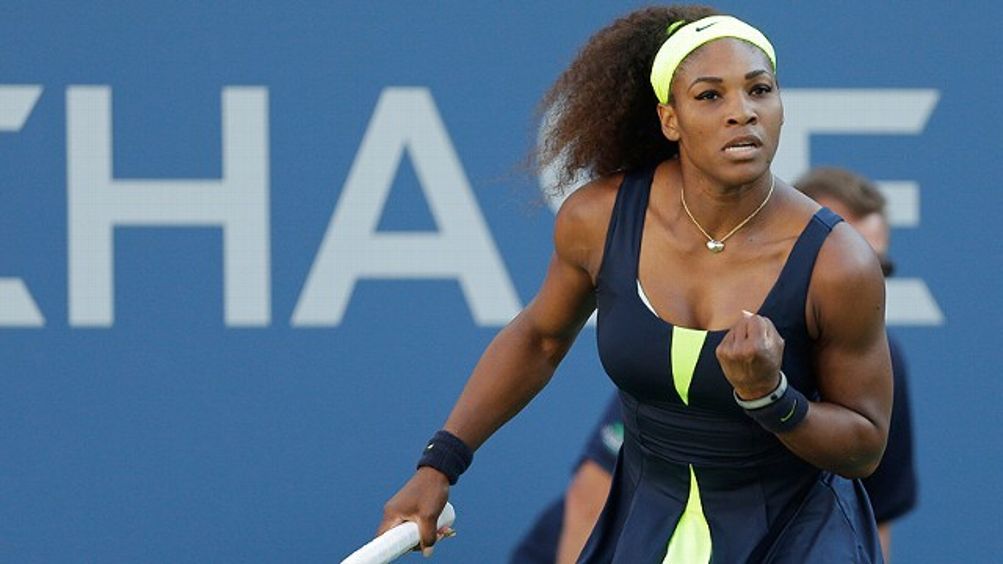 About 13 years ago, when the “Anna Kournikova 18th Birthday Counter” finally hit zero on thousands of GeoCities sites, the bro media swooped down on the body that would fill their pages for the next five years. Anna became the hub around which the great wheel of gendered sports talk spun. Everything said about women’s sports was, in some way, also about Anna Kournikova. Title IX? We deserve better than Anna Kournikova! The WNBA? No Anna Kournikovas for me to ogle! Meritocracy? Anna Kournikova will pave the way for a three-headed fame-whoring blargh blargh Kardashiblargh. Anna was “smoking hot,” a “problem,” a “symptom of our sick media culture,” and — on rare occasion — a tennis player who actually had a nice doubles career with Martina “hot, but not quite as hot” Hingis.

Her fame now seems oddly singular, the product of a time when every dude had a stack of Maxims in his bathroom. The objectification of female athletes didn’t begin when People listed a 16-year-old Kournikova among its “50 Most Beautiful People,” thereby opening the floodgates for a half-decade of bikini photos and slightly out-of-focus upskirt shots. But the extent to which the bro media celebrated Kournikova always felt like it had crossed over to some new, discomforting place, where the object’s failures on the court emboldened people to perv out on her body. Some fucked-up power dynamic was always on display — Kournikova was held up as proof that men could take a completely unremarkable yet thoroughly hot tennis player and use her as an excuse to never say one serious word about women’s sports. Kournikova has long since exited the public eye, but those years during which all female athletes had to somehow answer to Anna’s hotness had a lasting effect on how the country discussed female athletes. It created the following paradox: If all talk about women’s sports — however obliquely or subliminally — is about Anna Kournikova and all talk about Anna Kournikova is not ever about women’s sports, how do you talk about women’s sports?

Somehow, in this summer of Missy Franklin, Serena Williams, and Gabby Douglas, we seem to have stumbled out of this Babel. Anna Kournikova’s long braid of associations has loosened its death grip. Before we ride off into a future of equal sponsorship deals and nationally broadcast WNBA All-Star games, it should be asked: Was this summer a series of great coincidences, or have we really changed the way we celebrate female athletes?

Quickly, before Google can provide relief, list all the players on the United States women’s national soccer team. Now repeat the same process for the men’s team. If you’re like any of the millions of American sports fans whose interest in soccer has been elevated in recent years from “smug disdain” to “sometimes I click on stories involving Cristiano Ronaldo’s car,” you probably got further down the women’s side than the men’s. There are a lot of reasons for this — the USWNT having played in a World Cup and an Olympic final in the past two years, the USMNT’s inability to create a real star (also known as Landon Donovan fatigue), Nike’s very visible sponsorship of the women — but more than anything else, the USWNT have come to a greater prominence than their male counterparts because they have competed in a series of dramatic, meaningful, and widely televised games.

This statement should be obvious. Success begets success begets the Citizen Eco-Drive ad campaign begets a brand-new Buick LaCrosse. The USWNT were celebrated when they won and demonized when they lost. Should this really feel like progress? It seems silly and shortsighted to say that we have entered the Great Society because America paid some respectful attention to its women’s soccer team, but it seems just as silly and shortsighted to blargh on about contexts and history and appeasement, blargh, blargh, critical studies, blargh, blargh, the shine on a rotten apple, blargh.

The most memorable Team USA moments in the Olympics came from Serena Williams, Gabby Douglas, Alex Morgan, Missy Franklin, McKayla Maroney, Michael Phelps, Ryan Lochte, LeBron James, Ariel Hsing, and Jordyn Wieber. The number of women on this list did not come from any conscious effort by NBC to promote women’s sports. In fact, the network and the sponsors of the Olympics did pretty much all they could to continue with business as usual on the women’s side — swimming, gymnastics, a round of “reverential” (read: unenthusiastic) applause for the champions followed by the drunken, clumsy pawing of the prettiest Olympian on the podium.

In London, the prettiest Olympian happened to be Ryan Lochte. We seem to have reached a point where the way we obsess over Alex Morgan’s legs and perfectly symmetrical face doesn’t feel too different from how we obsess over Ryan Lochte’s abs and perfectly symmetrical face. Sexiness will always be part of athletes’ currency for the simple and unavoidable fact that they tend to be much better looking than the rest of us. This is crass, I guess, and the height of objectification, but part of being a professional athlete is having your body examined as a moneymaking, entertainment-driving commodity.

Again, the public’s willingness to turn Ryan Lochte into Heather Graham does not signal a sea change in sexual politics. LeBron James can make $200 million without having to show up in a single shampoo commercial. Abby Wambach will probably never make as much money as Alex Morgan. These truths and tendencies feel as static as they did before the Olympics. But somewhere in the midst of the garish parade of beach volleyball, Lolo Jones coverage, not–Lolo Jones coverage, slideshows of hot, racist long jumpers, and the Olympic Village stallion stories, a collective, genuine appreciation for women’s sports emerged in London. This enthusiasm carried none of the cynicism of the Kournikova era, but it didn’t feel overly self-aware, either. That so many would watch the USA-Canada soccer match over the start of a men’s basketball game only seemed revelatory after the fact. This past Sunday, when the U.S. Open women’s final ran concurrently with the 49ers-Packers season opener, the choice felt like one between football and tennis, between two very good football teams and the greatest female tennis player of all time. The choice, for once, wasn’t between war metaphors and a ninnying attempt to push women’s sports onto the mainstream.

These are admittedly vague and tacky ways to mark progress. Nobody is asking America to congratulate itself for disentangling from the Kournikova era. And yet the most heartening and encouraging sign for the increasing prominence of women’s sports is that nobody really asked anyone to change their minds about anything. There were no “We got next” ad campaigns for the USWNT; no tokenism (save the Augusta National Golf Club’s sad attempt to catch up with 1952); no lengthy run of male sports columnists who, hat in hand, bumbled on about their conversion to the gospel of Serena. The snide tone that used to color the national discussion about women’s sports has dissipated, at least a bit.

The summer of the female athlete happened organically, through a real shared enthusiasm for Serena, Gabby, Abby, Alex, and Missy. And that, in this male sports columnist’s opinion, is reason for cautious optimism.