The Phantom of Baseball 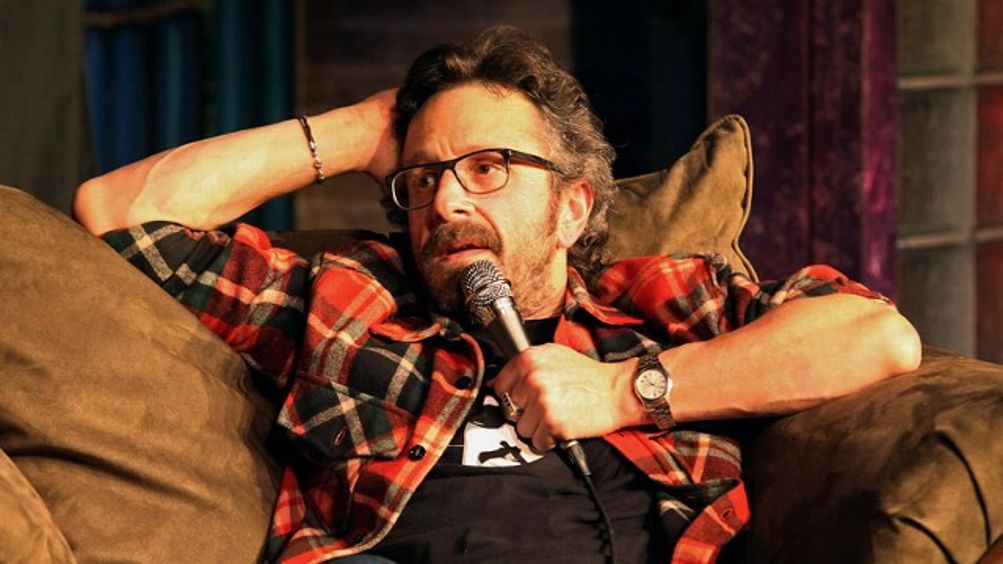 Neurosis — at least the Woody Allen kind — is hard to find in Los Angeles. Self-obsession and blathering about self-obsession, especially in a way that celebrates one’s own self-obsession, doesn’t seem to be as present here as it is in New York. Sure, there are actors who talk endlessly about themselves. There are also screenwriters who, in a very Larry David way, try to whip up neurosis, but if you talk to any of these successful people long enough, you start to realize that most of their problems revolve around sandwiches, “studio executives,” and juices. Everyone else in Los Angeles just sort of talks about traffic and the Lakers and weather and what meats to barbecue and where to find actual bagels. It’s not all bad — sometimes it’s edifying, or at least healthy, to be fixed into Southern California’s weird, static perspective on things. But for those, like me, who are at their happiest when listening to other people stack one layer of false modesty on top of another layer of false self-awareness, Southern California, and all its gyms and its phalanxes of actresses who hike up Runyon Canyon, can feel a bit alienating. Neurosis in Los Angeles is mostly an ugly approximation.

As a fix, I’ve been listening to the WTF podcast in the car. For those who don’t know, WTF features Marc Maron, a 48-year-old stand-up comedian, and his interviews with some very famous people (Anthony Bourdain, Louis C.K., Zach Galifianakis, Robin Williams, Chris Rock) and some other people you don’t know by name but quickly recognize when you Google image search them (Fred Stoller, Merrill Markoe, Rachael Harris). The podcast always follows roughly the same format:

0:00 -12:45: Maron talks about something going on in his life and sells ads for proflowers.com, Audible books, or Adam & Eve.
12:45-22:00: Maron introduces his guest and talks to them about how they came up in comedy/music/writing/TV.
22:13: Maron asks very specific questions about a very specific comedy club, mostly to say, “Oh yeah, I know _____ who does the booking there. He/she is a _______.”
23:15: Maron asks the subject about his/her meeting with Lorne Michaels.
25:27: Maron asks subject about substance abuse problems, mostly as an excuse to discuss his old days working as Sam Kinison’s drug mule.
32:15: Maron says something about William S. Burroughs and the Beatniks.
33:15: Maron asks, “So what was the dark side of that?”
37:12: Maron says something like, “I never could do [INSERT LUCRATIVE TV/MOVIE GIG] because all I ever wanted to do was become a stand-up. This is always followed by a disingenuous statement like “I’ve learned in my old age to really respect that sort of act.”
42:15: Maron talks about his father.
45:17: Maron says something underhanded and self-congratulatory about “not understanding show business.”
50:23: When his interview subjects are minorities, Maron grills them on their culture’s food (hello, Mindy Kaling!) or the difference between black clubs and white clubs. If the subject was successful in both white and black clubs, Maron kind of pats them on the back and says, “Way to go!”
59:13: Maron starts ranting about having too much heart to play the game and obliquely references his days coming up in Boston with Louis C.K.
65:14: Maron stares lovingly at his neurosis by admitting to his neurosis, pointing out the problems with his personal brand of neurosis (“I’m an angry motherfucker”), and concludes that he’s ashamed of these things, but doesn’t ever really mean it.

This sounds awful, I know. As someone who listens to the WTF podcast for an average of about 45 minutes a day, I wish there were a prettier way to describe what goes on. But outside of the occasional live show, which usually involves a bunch of comedians you’ve never heard of desperately reminding you of all the reasons you’ve never heard of them, Maron just kind of exposes a problem/darkness/neurotic tendency, flips it over, pokes at it, extracts some vaguely Buddhist/AA-ish platitude, and calls it a day.

I don’t know if it’s Maron’s voice — he sounds like Peter Vecsey after six Adderalls and a week with the most annoying works of Charles Bukowski — or if it’s the predictability of the show’s beats or if it’s Maron’s slow-bore drilling of his subjects, but there’s a hypnotic quality to WTF that can sometimes feel therapeutic. Maron’s neuroses are always slapped right down on the table — his bitterness over his friends’ success, his problems with alcohol and cocaine, his sobriety, his feelings of emotional abandonment, his problems with his second wife. His interview questions always lead his subjects straight into the vault of Maron’s insecurities, which he attacks with a steady arsenal of TV-inspired pop psychology. Every problem on WTF can be explained by a mother, a father, a cultural weirdness, Judaism, or addiction. When Maron interviews anyone who did not spend the ’90s in comedy clubs, he goes straight to an outdated, almost collegiate reductivism. The cringiest of these moments came when Maron interviewed Mindy Kaling. From the outset of the podcast, Maron grilled Kaling on her “Indian roots,” citing his “fascination with the culture.” It quickly became clear that Maron knew nothing about India, but really enjoyed the food and the idea of a God who had the head of an elephant. The discomfort got worse, especially when Kaling admitted to wanting to write a book that wouldn’t offend anyone, a statement that must have sounded blasphemous to a comedian who came up idolizing Kinison and Lenny Bruce. And when Maron began to ask Kaling about her demons, it was all I could do to not wrench the wheel and steer my car into oncoming traffic.

But these are exactly the sorts of moments that make the WTF podcast great. Maron’s interviews exist somewhere outside of the polite Tonight Show format, where one humbler, funnier person asks a self-involved, possibly vapid person some questions that have been prescreened by an army of publicists. Every Letterman and Leno interview goes down easy in the same way. Every Maron podcast self-combusts, picks itself back up, and drags itself across the 75-minute mark. The repetition of his specific traumas — “the Lorne meeting,” cocaine, and comedy clubs — creates something of a narrative structure for every unctuous, predictable talking point. Maron is narcissistic, chauvinistic, and still living in the drugged-out comedy clubs of the late ’80s and ’90s, but he somehow pulls all these things into a powerful, compelling, and, most important, funny neurosis. The result is The Lost Tapes of Woody Allen: The Marijuana Sessions.

That mess has yielded some genuinely touching interviews. Perhaps the best defense of all the badness of the WTF podcast, outside of its entertainment value, is that its most honest moments would not be possible in any other format. At the start of his memorial re-broadcast of his interview with Patrice O’Neal, a crestfallen Maron talked about the loss of a close friend. Instead of falling back on the general platitudes that accompany the death of a comedian, Maron twisted around in his own sadness and loss. There was something almost name-droppy about his speech, and Maron, as always, came across as self-involved and almost a bit too chest-beatingly elegiac. But there was also a brutality to the eulogy that seemed to ask the audience to question the self-obsessed, impolite way we process the dead.

A prevailing self-righteousness hangs over every Maron podcast. It goes something like this: Any form of comedy that doesn’t involve one man and his search for truth via unabashed navel-gazing is bullshit. Maron goes to great lengths to try to defuse this by celebrating everything from Carrot Top to Stella, but his scorn is never too far from the surface. (Michael Ian Black pointed out this “subtext” in his appearance on WTF. Maron’s response was a snickering denial.) But maybe he’s right? Comedy, like everything else, has been overrun by “nerds” who apply Ivy League pedigree and pseudo-scientific rigor to funniness. And in a media landscape where any small gaffe or slip-up can instantly be removed from its context and broadcast through social media, all those very smart comedians have also become very careful comedians. Maron has become the watchdog for an old, more personal style of comedy and has whipped himself up into the medium’s staggering, drunken Toshiro Mifune — a warrior who knows that an era has passed, but can’t quite bring himself to embrace the change. (The irony, of course, is that WTF is a podcast.) His barely concealed hostility toward anything that isn’t what Patrice O’Neal called “honest shit” seems to drive him deeper into narcissism and neurosis, almost as if he believes that if he really fucks himself hard, he’ll be able to overwhelm everything that’s cute and false and silly in today’s comedy scene. This hero act isn’t pretty, sure, but it’s ultimately righteous.

Comedians are always trying to one-up each other (which is why a good rule of thumb is to never hang out with more than one of them at a time). When WTF is at its best, Maron’s constant, if somewhat repetitive, assault on himself inspires his subjects to get caught up in a game of “Who is more fucked up/insecure/angry?” (The two-part Judd Apatow episode is the best example of this.) As a listener, it’s hard not to interject yourself into the back-and-forth. There have been times, usually early in the morning, when I’ve put on a WTF podcast and found myself talking, stupidly, about my own problems. And strangely, these mini-therapy sessions in which I’m talking to Maron and my steering wheel have been far more effective than anything I’ve found in a professional’s office; perhaps it’s worth wondering if Maron might be unknowingly pioneering some new technique whereby the unrelenting and unabashed narcissism of the therapist encourages the patient to indulge and discuss his own problems, at least a little bit. For neurotics, who feel guilty about their neuroses but can’t quite stop themselves because they secretly (or not so secretly) believe in their neuroses, Maron acts both as a dumping ground and a role model. It used to be that severe neurotics would read Proust and immediately feel better about themselves. An indifferent look from a bartender might ruin your day, sure, but at least you weren’t waiting all that time in your room for Gilberte to answer your letters. For today’s sloppier, oversharing public, Maron’s podcast fills a similar therapeutic role. He’s your compassionate Jewish friend who can only discuss your problems through his own, but unlike that dude — thank god — Maron comes with a fast-forward button.