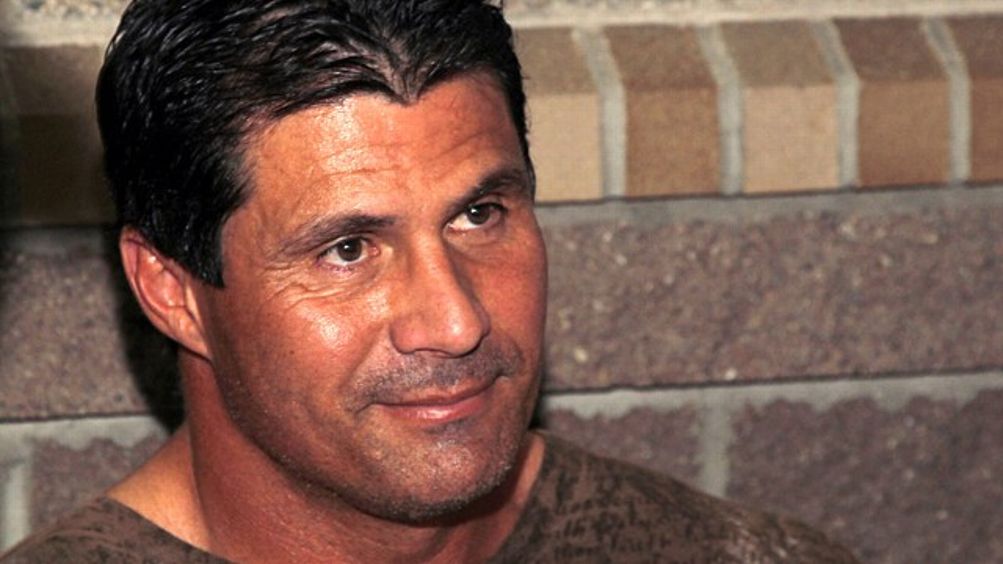 Jose Canseco — slugger, steroids enthusiast, 21st-century performance artist — is trolling us. That much is obvious. But why, exactly, is he doing it? As I see Canseco robo-walking toward me one afternoon at a Newark ballpark, I have a feeling I’m about to find out.

I’m not late. I got here an hour early. This is typical. You feed reliable information into Jose Canseco (time of interview, name of reporter) and what pops out is a tweet announcing Al Gore’s death. About that Twitter account, Jose …

“You’re supposed to be restricted to just talking about the league and the team,” Canseco snarls again.

I feel like I’m being trolled right now. But let’s play along. Jose Canseco, 47, is the new designated hitter for Massachusetts’s Worcester Tornadoes. The Tornadoes are an independent ballclub — a ragtag bunch of dead-enders — that have come to Newark to play the Bears. “You get a lot of guys fresh out of college who think they were the shit,” says Tim Raines, the 52-year-old former major leaguer who’s now the Bears’ player personnel director. “Now, they’re coming down to reality.”

Canseco squeezing his eternally muscled, 6-foot-4, 260-pound frame into a gray Tornadoes road jersey feels like a put-on. Bears manager Ken Oberkfell, who played against Canseco in the 1989 World Series, notes that he has trouble laying off breaking balls. When I ask Danielle Dronet, owner of the Bears, how many fans Canseco will add to the gate tonight, she replies, “None.”

I proceed cautiously with Mr. Tornado. In a recent tweet, Jose, what did you mean when you said you wanted to “juice the players up?”

“I mean pump them up,” Canseco says. “It’s a play on words, which everyone takes the wrong way, of course.”

We go on like this, two guys talking Worcester. We discuss Canseco’s emotional state (“You still get butterflies, absolutely”). The Can-Am League (“The main factor is fun”). His game-day breakfast (“Eggs. I needed some carbs, so pancakes and oatmeal”). But if you know Canseco, you know the manipulative blockhead can transform instantly into a brilliant savant.

“Romney. This joker comes in saying that Obama has done nothing: ‘He hasn’t fixed the deficit.’ Let me tell you something. Do you actually fucking believe that in four years you’re going to fix the deficit? Are you kidding me? That’s a lifetime project. … It’s amazing the bullshit that people believe.”

“It’s all his fault,” Canseco scoffs at Romney’s line of attack. “Nobody’s going to fix this in four, eight, 12 years. Maybe in 30, it’ll fix itself.”

One more time: Why is Jose Canseco trolling us?

Pro wrestler “German Menace” Kraig Stagg: “I know who he is.”

Jose Canseco is not a bum. Or, rather, there’s a small but important part of his soul that has not been consumed by his overweening bumminess. Seven years after it was published, Canseco’s book Juiced feels like a sportswriting landmark. “It was exactly how I said it,” Canseco boasts now, and minus a few muffed dates and box scores, he’s right. Canseco1 delivered the pictures. There’s no more perfect image of the Steroid Era than Canseco and his A’s teammate Mark McGwire crowding into a bathroom stall in the Oakland Coliseum so Canseco can prove, as he put it, that “I’m a good injector.”

Canseco has nightmares about baseball now. “Constantly,” he says. “Actually, I’ve had a bunch where I think La Russa was involved.” In his dreams, Canseco isn’t in the lineup, the bus leaves him behind, or — a poignant one — he writes a book about his teammates.

Like Jim Bouton before him, Canseco tried to write what baseball was really like. As with Bouton, he had a knack for salesmanship. You know the names named: McGwire, Rafael Palmeiro, Pudge Rodriguez. If you need proof that Canseco remains “the godfather of steroids,” consider that this week’s mini-drama in the Roger Clemens trial turns on whether or not Clemens was at a Canseco pool party.

But what makes Canseco important isn’t the names — the Mitchell Report had names. Canseco saw PEDs purely as a financial transaction. The players wanted to hit more home runs (and make more money). The owners wanted the players to hit more home runs (and thus make the owners more money). When I mention McGwire issuing his groveling apology to Bob Costas, Canseco says, “Ridiculous. Apologize for what? For bringing fans into the stands? For him and Sammy Sosa saving the game?” Steroids are usually talked about in such hysterical terms that you’re surprised Canseco doesn’t burst into flames.

“It’s a crying shame that those guys haven’t been inducted [into the Hall of Fame],” Canseco says. “Especially Mark McGwire. That’s disgusting.”

Twitter has made Canseco even more ludicrous. One night in March, he brags he can hit a golf ball 380 yards. Three weeks later, at 10:17 p.m., he asks the universe, “How many inches are in 380 yards[?]” Weird night, huh? If Twitter had been around in 1988, Canseco tells me, he’d have “about 10 million followers” now. He offers a hypothetical Jose throwback tweet: “Oh, yeah, I’m going over to Madonna’s house right now ….”

As Gawker notes, it’s an open question as to who’s writing Canseco’s tweets. “Do you write all of them?” I ask him. Canseco suddenly gets interested in the giant American flag out near center field. “Yeah,” he says, not meeting my eyes. “Uh-huh.”

Do you know what “trolling” means, Jose?

“If I give you a double-meaning statement,” Canseco says, “I want to see psychologically how you react to it.” So if Canseco tweets that he wants to “juice the players up,” he wants to see how many saps like me will yell, “Steroids!” Lately, Canseco has been tweeting, “I complete you.” You might think this is a bastardized version of the Jerry Maguire line. In fact, I Complete You is the name of Canseco’s forthcoming “anti-aging” drink.

This idea of an @JoseCanseco meta-feed — where we parse every misspelled utterance for its true meaning — seems awfully flattering to Canseco. I suggest that the question is whether his trolling is intentional. “I have an image to uphold,” Canseco says, “so don’t make me funny.”

Later tonight, Canseco stands on the dugout steps, apart from the other Tornadoes, staring into the distance. I think of one of his best tweets: “Maybe I am the phantom of baseball.”

That’s what Jose Canseco is: a phantom. The title accommodates both Jose the truth-teller and Jose the mind-fucker, Juiced and @JoseCanseco. Canseco’s role is to hang on as an undead zombie of late-’90s MLB — overmuscled, unenshrined, unapologetic. Jose Canseco isn’t trolling us — or just us. He’s trolling baseball.

This makes no. 33 a far more sympathetic figure. He’s our phantom. On April 20, Canseco saw Bud Selig at Fenway Park’s 100th-anniversary party. “I almost went over and said something to him,” Canseco says. “But … ehhhhh. He’s probably too old right now to recognize anything. He’s probably a little bit senile.” Canseco flexed his biceps for the crowd instead.

Six days later, Canseco was in a first-class airplane cabin with Greg Maddux, the Cy Young winner who’s now an adviser with Texas. Canseco claims Maddux pretended not to see him. “How the fuck do you miss me?” Canseco says. “Six-four, 260. What a fucking douchebag. What a fucking ass.” Pause. “He’s pudgy and overweight, looks terrible.”

After batting practice, Jose is doing push-ups on the outfield grass. “Look at him, with his hat turned backwards and his sunglasses up on his head,” says a fan named Chris Barrale. “He looks like me in an intramural game in college.” But that’s the phantom of baseball you’re talking about. He craves not dignity but attention. This is why Canseco has launched a Twitter campaign to earn a write-in slot for the All-Star Game. If he gets it, he has promised to sit in the stands in full uniform.2 It’d be like Joe Jackson stopping by the 1921 World Series.

Mike Ness, a 24-year-old Newark pitcher, stares down the phantom early in the game. “I was trying to throw a little harder than I can,” Ness will say later. He walks Canseco twice. No one in the stands — neither those chanting “Rat!” nor those professing semi-ironic love for Canseco (“Slap the haters!”) — is very satisfied by this.

In the top of the sixth, Canseco lunges at a Ness breaking ball. The haters erupt. In the eighth, Canseco looks at three straight called strikes and robo-walks back to the dugout. “He’s through!” a fan named John Peoples yells behind me.

Jose Canseco is a form of civil disobedience. And until Bud Selig can talk about the ’90s without a federal prosecutor present, Canseco’s just about the only form we’ve got. I hope he plays till he’s 60.

Have you thought about your own death, Jose?

How do you want to die?

“Hopefully,” the phantom says, “having sex in bed.”