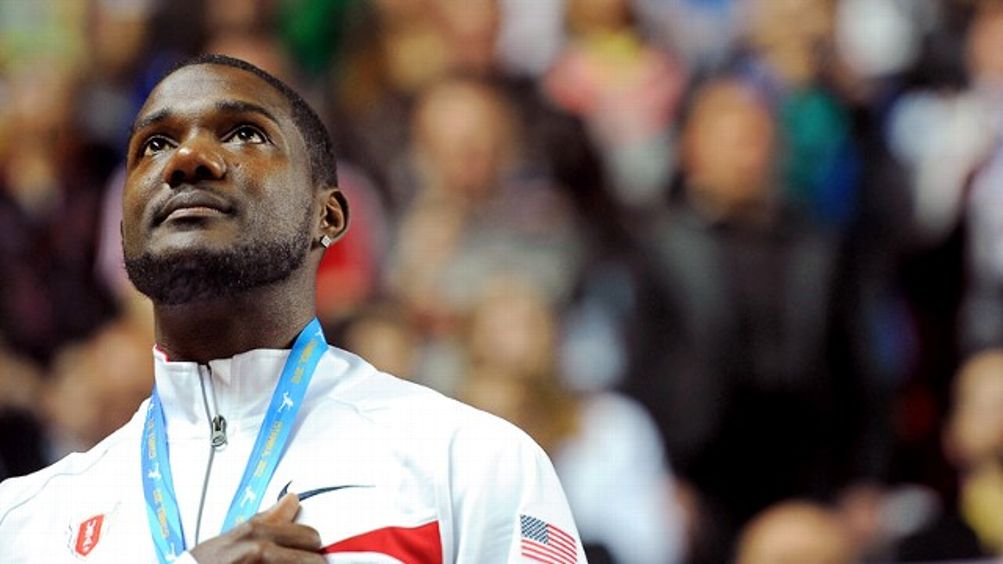 In March, Justin Gatlin went to Istanbul to run the 60-meter event at the World Indoor Championships. Before his first heat, his hands were on his hips, his huge torso swaying, his massive thighs and fine ankles, like a horse’s forelegs, shaking loose. I watched him take his time at the line and wondered what to expect. I really had no idea. The last time he had raced for a world title, at the World Outdoor Championships, he was hobbled by frostbite suffered while cryogenically freezing his feet.1

The USA Track & Field media guide didn’t help. It made no special effort to promote him. Still, the printed bio was hard to ignore:

Under “About Justin,” it read, “Justin made his return as one of the top American sprinters in 2011 after serving a doping suspension from 2006-2010.” Gatlin is now 30 years old.

The gun went off and the runners gradually rose to their full heights and kicked out their knees. Gatlin cruised to win his heat. The next day, he won the final with ground behind him. Despite the absence of the top sprinters, including Usain Bolt, Asafa Powell, and Yohan Blake — many runners skip the indoor season to focus on the summer, especially during an Olympic year — it was a strong field. For Gatlin, the win meant something. But what?

“I came here dominating and I wanted to follow up,” Gatlin said afterward. Dominating? That was a curious thing to hear from a man who had sunk his chances at his last major meet by wearing wet socks into a cryogenic chamber. It was especially strange for Gatlin to say, considering that while he was serving his long suspension for excessive testosterone, Bolt was moving track into another time zone, and several other runners were also blowing by Gatlin’s best times.

Athletes talk a lot of shit. They psych each other out, they psych themselves up. Gatlin’s talk doesn’t quite smell like trash, though. Presumably, when Gatlin said he was “dominating,” he was talking about his performance in practice. But it also sounded like he was talking about his performance in 2003, 2004, 2005, when he had been at the top of the sport — as if he were just picking up where he left off when he was banned, as if the intervening half-decade had never happened. After the race in Istanbul, Gatlin’s mind was on the past. “I won the 2003 World Indoor Championships in Birmingham with exactly the same time, and it feels great to be back. I have my confidence back and I dropped a couple of pounds” — to the same weight, he likes to point out, that he was in 2004, when he was called the fastest man on Earth.

In early July, over the phone from a hotel room in Paris, Gatlin recalled his win in Istanbul and said it was “like a welcoming home.” That was the moment when he knew he was ready to be the best again. “It was a feeling I hadn’t felt in a long time,” he said. “It was like a chill.”

Gatlin thinks that his time away from the track might have helped preserve his body from injury and wear. Still, four years is a long time for an athlete to miss. Especially when he spends part of it, by his own admission, drinking, lifting, and gaining weight. He tried out as a wide receiver for the Tampa Bay Buccaneers, but it didn’t work out. It took him a while to get serious about running again. Once he did come back, it didn’t go well at first. He injured his hamstring and his quad, and then had to deal with the cryo-frostbite. He spent a lot of time popping blisters. “I know that sounds disgusting,” Gatlin said. “[It was] like with a needle, and all this water, or whatever you call it, comes out.”

He had zero reasons to be confident that he could win another Olympic title. The only man who has ever won the 100-meter twice is Carl Lewis (and he succeeded only after Ben Johnson was disqualified for doping in 1988). As Bolt discovered at the Jamaican Olympic trials when he lost to his training partner Blake, it’s hard enough to be on top four years later, let alone eight. And Gatlin’s top time was nowhere near Bolt’s 9.58-second world record. Gatlin didn’t even run that fast right before he tested positive for elevated testosterone. Nor is there precedent for a sprinter returning to the top after the kind of long doping ban that Gatlin experienced. Of course, there have been a lot of drug suspensions in track, and so a lot of comebacks. As it happened, Gatlin’s own current coach, Dennis Mitchell, was hit with a two-year ban in 1999. (At the time, Mitchell tried to explain his high testosterone levels by saying he’d drunk too much and had sex with his wife a bunch of times. Later, he testified that his coach, Trevor Graham, helped connect him with a drug supplier.) Mitchell came back to run on the 4×100 relay team that won the 2001 world championship — except, that team was later disqualified after a teammate was implicated in the BALCO drug scandal.

Yet here was Gatlin, talking about a return to the podium. “I’ve always been the kind of a runner who’s been good under pressure,” Gatlin says. “I just need to go out and execute.” Usain Bolt? Not unbeatable. Yohan Blake? “Just another competitor.” Asafa Powell? Gatlin beat him in May in Doha. Tyson Gay? Defeated in the final of the Olympic trials last month, where Gatlin ran a personal best of 9.80 seconds.

So Gatlin is feeling good. As for the people who suggest he shouldn’t be there at all, that he cheated, that he is guilty of a cardinal sin — he lets them think what they want. He does not apologize for doping, because he says it was not his fault. Gatlin did help anti-doping investigators extensively during the BALCO probe, but he has accepted the suggestion of his former coach that a masseur sabotaged him with steroidal cream.

“The critics are going to say whatever they want to say probably for the rest of my career,” he says. “I really don’t get hung up on who I need to prove myself to. When I wake up, I’m Justin.”

I tell him he’s not shy.

“You can’t be when you’re a sprinter,” he says. “I’ve never met a sprinter who’s shy or not confident in himself,” Gatlin says. When he steps to the line, he knows who his competition is, and he knows that his competition can lose. “You have to really think like that,” he says. “Because if you don’t, and you give everybody a little more edge on you, then you’re just going to be an audience member who’s out there running. That’s what it’s going to feel like.”

An audience member? “That’s what I call people who are there but not there.”

Gatlin is a big guy, 6-foot-1 and about 180 pounds. He’s tall, if not as tall as Bolt, but what stands out is his trunk. It’s like an oak’s. When he smiles his face becomes warm, but on the track before he races he projects an overwhelming intensity. He is serious and passionate on the track, and he loves attention. He calls sprinters “entertainers,” and he feeds off the crowd. “Those people came out to watch a great show. They paid money,” he said. “Just hearing certain people — ‘Let’s go Gatlin!’ in the audience, or ‘You can do it! Let’s go Justin!’ — it makes me feel like there are people out there rooting for me. They’ve probably never met me in person, but they are supportive of me … I don’t want to let them down.”

I ask him how he feels about the people who think he already let them down, when he failed the drug test.

“I feel no way about it really at all, because I’ve got to wake up and be Justin” — he repeats this insistence — “regardless of whether I did it to myself, or I didn’t do it, or if I was sabotaged, or whatever.”

“If I say it right now,” Gatlin answered him, “are you gonna give me a hug?”

Gatlin was born in Brooklyn and grew up in Florida. He had success quickly. He won the NCAA 100-meter and 200-meter titles as a freshman at the University of Tennessee. He tested positive for an amphetamine, but was let off after he showed that it was from a medication he took for attention deficit disorder. In 2004, he became the youngest Olympic 100-meter champion since 1968, winning gold at the age of 22. By then he’d turned pro and gone to train with Trevor Graham. Graham was later implicated in the BALCO case.

Gatlin was supposed to be part of a new generation of runners who would help the sport recover from the taint of the drug scandals that were cropping up. As it happened, the generation that helped recover track’s popularity came on Gatlin’s heels. At the 2008 Olympics in Beijing, Bolt won three gold medals and set three world records, including the marquee 100-meter. He was long-limbed, extremely charismatic, and just 21 years old. He became a global phenomenon.

You have to be the most confident man in the world.

It’s hard to know what Gatlin’s chances are against Bolt, or against Blake, Powell, and Gay, who broke Gatlin’s American record but is overcoming a serious hip injury. Gatlin’s 9.80 in Oregon in June is one of the fastest times this year, but not as fast as Blake’s 9.75. In Paris in early July, Gay beat Gatlin. It was just a Diamond League meet, no big deal — the times were a touch slow; consider it gas saved for the Olympics — but a loss is a loss, and Gay isn’t Gatlin’s toughest competition. Gatlin shrugged it off. “I won the gold in Athens and the same thing should happen in London,” he said afterward, according to the AFP. “Obviously the trials were better because I won. I also had some jet lag.”

The night before that race — it was nearly midnight — I had asked Gatlin about the relationship between confidence and being the fastest man in the world. His answer was contradictory. “It’s part of your résumé, being the fastest man in the world,” he said. “You have to be the most confident man in the world. It’s an eerie feeling, because you go out to a race and you know that you can beat everyone on that line, but at the same time, there’s always that little shred of doubt: What if it’s the day that I get beaten? What if today is the day someone steps up and wants to race me head to head? Everybody gets beaten. Everybody’s going to get beaten at some point in time when they’re on top.”

So, I wanted to know, does Gatlin consider himself the most confident man in the world?

“I wouldn’t call myself the most confident man in the world, but I would feel that when I step to the line now, I understand the worth of running nine seconds in front of millions of people. It was taken away from me for half a decade, and I wasn’t able to do something that I loved truly. To come back to the sport now, I’m not givin’ any second back to anybody else. I’m taking as many seconds as I can, and I’m keeping them for myself.”