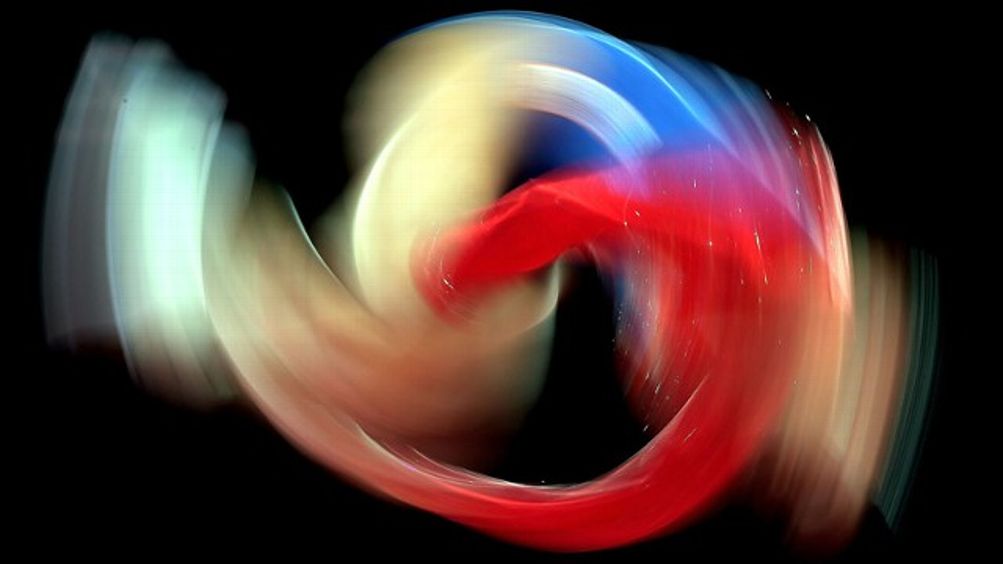 There are two kinds of people in this world: Those who had a trampoline in their backyard growing up, and those who, to this day, can still rattle off the names of every kid in their neighborhood who was lucky enough to be in Group A. (“You’ll break your neck!” was the “You’ll shoot your eye out!” of my own sad sans-trampoline childhood.)

Getting invited to a house with a trampoline always meant going through the same motions: feigning surprise (“Hey, what’s that in the backyard?”), then nonchalance (“Oh, a trampoline? Yeah, my cousin’s got one”); ignoring it for a while so as not to seem overly eager; and then, finally, just giving up and breaking down: “OK SO CAN WE GO JUMP NOW OR WHAT?” The trampoline-having kids were always infuriatingly blasé about their incredible setup; I suspect that many of them have now graduated to more grown-up pleasures, like owning a slopeside ski house but only taking two runs a year.

Once you got them on the damn thing, though, there was no limit to the dangerous wonder: the back flips, the splits, the way if you timed it right you could launch someone high enough that it was unclear where — or even whether — they’d land. Puny but determined, we would drag the trampoline over by the swing set (to jump off of the top of the monkey bars) or, in sublime cases, next to the pool. I only misjudged and splatted on the concrete deck once. OK, it was twice.

Most sports in the Olympics, from cycling to badminton, only distantly resemble the versions that we mere civilians enjoy. (The hilarious footage of the Chinese and South Korean badminton teams purposely losing their match probably comes closest to looking the way I do when handed a birdie.) The trampoline is one of them: The event shares more DNA with, say, diving than it does with the backyard apparatus we monkeyed around on as kids. For one thing, the trampolinists routinely fly 10 meters in the air, the same height as the diving platform; for another, they perform twisting spins and piked flips at the same blink-and-you’ll-miss-it velocity as their waterbound counterparts. I have zero idea how the judges have any clue what’s going on.

Here’s how it is judged, though: Trampolinists — I can’t read or write that word without singing it to the tune of “Gasolina” in my head; you’re welcome! — earn points for the degree of difficulty of their routine and their execution of same. In addition, for the first time in Olympic competition, they will get points for their “time of flight,” which is determined by a Mission: Impossible–esque “combination of laser beams mounted on the trampoline frame that records each time the athlete breaks the beam while sinking into the bed.” Who knew the simple trampoline had gone all techie on us?

There was a time, of course, when the trampoline itself was the technological innovation. Rudimentary versions of bouncy surfaces have long been known to exist: the Inuit used walrus skins to toss their fur-clad friends up in the air; stage performers sometimes hid beds in the orchestra pit and jumped on them. (To this day, a front one-and-a-half with a twist is known as a “Rudy” in homage to a 1920s vaudeville guy named Dave Roudolph.) There are even (most likely apocryphal) tales of a French circus performer named Du Trampolin who came up with the concept. Officially, though, the creator of the trampoline was an Iowan student-athlete named George Nissen who adored tumbling runs and diving boards and wanted a way to stay airborne and do his tricks for as long as he possibly could.

His early 1930s “bouncing rig” prototype, inspired by the safety nets used by trapeze artists, was assembled with a combination of scrap metal, canvas, and cut-up rubber tires. Unsurprisingly, there were a few things that needed to be ironed out. “We did have a few times when the material split down the center,” Nissen recalled to the New York Times in 2000. “We found some stronger stuff.” When it rained, the canvas would fill with water and, as he told the San Diego Reader in 1998, “Of course there’d be a big puddle in there and it was just like bouncing in mud. But when it dried out, it was — zing!”

He and two college buddies, longing to see the world, formed a traveling tumbling trio they called the “Three Leonardos.” During one stint in Mexico City, he fell in with a group of local divers, who referred to the diving board as “un trampolín,” and, to mix languages here, voilà. (The word “trampoline” began as a capitalized trademark, but after a while — just like Band-Aid, or Jell-O — it dissolved into a more generic noun.) As the years went by, Nissen refined his design and increased his sales; when World War II began, he convinced the Air Force to use his invention to help prepare pilots for the feeling of weightlessness. Later, astronauts used the device too. Nissen filmed (tragically unembeddable) instructional videos to show Americans the proper technique.

In the decades following the war, the trampoline took off, particularly in schools. One amazing Sports Illustrated piece from 1960 brought news of the use of the equipment even for, gasp, the ladies: “Girls in their early teens are often at the ugly-duckling stage of development,” one high school gym teacher named Phyllis Kiehn is quoted as saying. “The trampoline makes physical fitness fun. Within the space of a single week, you can actually see the girls grow more graceful.” The first national and, later, international competitions were held. Large and totally dangerous “jump centers” began cropping up around the country, predecessors to the ones of today, which are owned by Real Housewives and should probably be avoided by New York Yankees.

Nissen met and married a Dutch acrobat named Annie De Vries their daughter Dagmar would later wed a man named Ron Munn, who had won the AAU trampoline championship twice and earned gold in the event at the 1959 Pan Am Games. Munn, who grew up in Texas, recalled his neighbors owning a Nissen trampoline. “As soon as I saw it, I wanted to climb their picket fence when they weren’t home to try it out,” he told the Green Valley News. Munn would also help promote Nissen’s zany trampoline-based sport, spaceball. (This being the Cold War era, the Soviets had an all-too-similar game they called cosmoball.)

Nissen was both restless and a consummate showman, two traits that helped explain some of his more notorious marketing stunts. In 1960, he rented a kangaroo and was photographed bouncing alongside it in Central Park. (The shot, which took nearly a week to get right, ended up in Sports Illustrated.) In 1977, he smuggled the components of a bespoke four-by-eight-foot trampoline to the top of the Giza pyramid in Egypt, assembled it, and bounced away. Back down at the bottom, he “found several Egyptian police along with the director of Egyptian antiquities waiting,” his daughter Dagmar wrote in a book about her dad. He had interests outside of the trampoline too: Nissen held more than 40 patents (including one for something named the “Bunsaver Air Cushion”) and in the ’70s owned a women’s professional basketball team called the Iowa Cornets.

His grandest dream of all, though, was that one day the trampoline would become an event in the Olympic Games. When he would tell people that, Dagmar wrote (her book is titled My Father’s Dream of an Olympic Trampoline),1 the chuckling answer was always the same: “It’d have to be the year 2000 before something like that ever happened!”

Inside the Super Dome in Sydney, Australia, an 86-year-old Nissen watched proudly as Olympic athletes soared, ebbed, and spun on the apparatus he had created more than 60 years earlier. The year was 2000 — just as the unwitting naysayers had predicted. A year earlier, the governing body of tumbling and trampolining had merged with FIG, the gymnastics federation, under the condition that trampoline be added to the slate of events at the Games. Irina Karavaeva and Alexander Moskalenko, two Russians, won the inaugural competition. Half a century earlier, in the ’50s, Nissen had given their country its first trampoline. “He was so proud of where the sport had gone in his lifetime,” recalled USA Gymnastics chairman Peter Vidmar, who sat next to Nissen in Sydney.

Eight years later, Nissen again sat at the Olympics, this time in Beijing. He looked frail at 94, but that didn’t stop him from visiting a Chinese gymnastics academy and even taking a few hops on the trampoline. (A fitness buff, Nissen was known for doing daily handstands well into his advanced age; in his 90s, he still insisted on breaking out modified headstands.)

The Chinese team dominated the 2008 games, taking home two golds and a bronze. They remain the front-runners in London, and even have a Phelps-Lochte situation going on between men’s team members Lu Chunlong and Dong Dong (be mature), who have been trading first-place finishes in international competition over the last year. (On the women’s side, Olympic and world champion He Wenna remains the athlete to beat.) The recent rules changes that have added time of flight to the scoring ought to be an additional boon to the Chinese, who are known for getting some pretty rare air.

Team USA is composed of Steven Gluckstein (who beat out his brother Jeffrey at trials to make the team) and Savannah Vinsant (at 19, she’s the youngest athlete in the event); neither are expected to battle for gold. After the Chinese, the best trampolinists (trampoliiiinists, dame más trampoliiiinists) come from a different part of North America. Canada’s Jason Burnett very nearly won the gold medal in Beijing, losing out to Lu by just three-tenths of a point. A daredevil who also enjoys parkour, Burnett calmly broke his fibula in the summer of 2010 while attempting a trick. He also holds the world record for completing the most difficult routine, one with a degree of difficulty of 20.6, and there’s a good chance he’ll try for a relatively difficult Olympic routine to help make up for his time-of-flight disadvantage.

His teammate Karen Cockburn has medaled in all three of the Olympic trampoline competitions, finishing with bronze in Sydney and silver in Athens and Beijing. She is one of four women who will be bouncing in their fourth Games. In 2007 she married former bronze medalist Mathieu Turgeon, though it took some convincing: “At a party after one of our national team banquets, everyone was sure he was going to ask me to dance, so I went and hid in the bathroom — I was like, ‘No! He’s a nerd!'” she once lovingly said. Both Burnett and Cockburn, as well as up-and-coming youngster Rosie MacLennan, train with coach Dave Ross at Skyriders Trampoline Place just north of Toronto.

Nissen died in April 2010 at the age of 96; you just know that the salesman in him must have been trumpeting the longevity benefits of trampoline exercise right up until then. His legacy endures, though — he’s managed to bring trampolining not just to your neighborhood backyards, but into your living rooms, too — even if the two versions of the old “bouncing rig” have evolved completely away from one another.

“People are like, ohhh, I have one of those in my backyard!,” lamented Erin Blanchard, a former member of the U.S. Olympic trampoline team. “I’m like, no, it’s not like a backyard trampoline at all. It’s completely different.”

Editor’s note: This piece has been updated to reflect that the book My Father’s Dream of an Olympic Trampoline has been withdrawn from publication.