Then the World Exploded 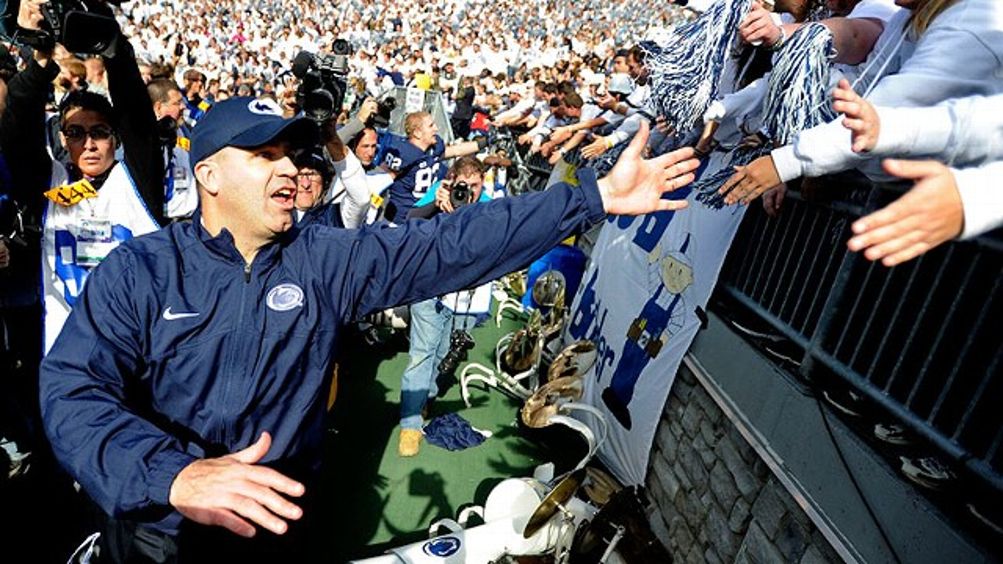 I feel like I should start with the kicker, a teenager from northwest Indiana whose torso is so slight that it sometimes appears to bow under the weight of his shoulder pads. There is no one who embodies the charged emotional filaments of the post-Paterno era at Penn State quite like Sam Ficken, no. 97 on your roster. Ficken is an underclassman whose premature turn in the spotlight can be linked to one of the most tragic and revolting and incomprehensible cycles of events in the history of college sports.

On September 8, during a 17-16 loss to Virginia, Ficken missed four field goals and one extra point, including a potential game-winning 42-yarder in the final seconds. It was a mini-disaster, a cause for sympathy and Schadenfreude alike, and while Ficken had nothing to do with anything that had come before, the reasons for his failure could be traced directly back to the NCAA’s announcement of severe sanctions against Penn State on July 24, which allowed players like Anthony Fera, the Nittany Lions’ experienced kicker, to depart immediately for the University of Texas;1 and the reasons for these penalties could be traced back to the release of the Freeh report a couple of weeks earlier; and the rationale behind the Freeh Report could be traced back to the dark period that began a year ago in November, upon the release of a horrifying grand jury report that shook the hell out of my hometown and left us with this: a season that means absolutely nothing and yet feels freighted with urgency.

Ireally wanted to write about the present and future of Penn State football this week, because I’m not sure there’s much to say about the past that hasn’t been hammered into the public consciousness, but I don’t think it’s possible to do this yet, to fully extract one from the other. On Saturday, for the first time since last November, I parked my car in the downtown garage where I have been parking for home football games virtually my entire life. Then I walked down the stairs and cut through the alley, past a takeout restaurant with a very large portrait of Joe Paterno hanging like an icon above the counter.

There is no statue anymore, but these vestigial reminders of Paterno’s hold over this community can be found everywhere: At the Penn State–themed clothing stores — and for those who are not familiar, downtown State College is comprised of 38 percent bars, 43 percent Penn State–themed clothing stores, 11 percent pizza parlors, and 1 percent Austrian bistros — you can find hats with the number 409 (Paterno’s win total before the NCAA swept away more than a hundred of them), and multiple T-shirts featuring caricatures of Paterno’s fat spectacles and prominent proboscis. There are many around here who are not yet prepared to let go of the idea that our football coach stood above moral failure, and there are many who will never let go of that idea. I think the majority of people are tired of arguing about it, to be honest. So now there is just that unspoken weight hanging over everything.

This is the subtext with which Bill O’Brien, Penn State’s current coach, has been forced to operate. He cannot be a normal football coach because everything about this situation is utterly bizarre. He has not merely been charged with following a legend; he is following in the footsteps of a legend whose reputation has been cleaved into pieces. He is not merely dealing with NCAA sanctions; he is dealing with NCAA sanctions that seemed designed specifically to disable the Penn State program for years to come. He has lost his starting running back, a backup quarterback, a wide receiver, and a tight end (among others) to competing Division I programs; he will likely lose several more players, not to mention several more recruits, before the immediate transfer window closes next August. The crowds, while still among the largest anywhere in the country (90,000-plus), are smaller than I’ve ever seen before, and even university officials are acknowledging that ticket prices are too high. There are some who are staying away because they believe Bill O’Brien cannot patch up the horrors of Penn State’s recent past, and there are probably even more who are staying away because they believe Bill O’Brien cannot make up for the perceived injustices perpetrated upon Joe Paterno. Those of us who remain are the ones in the middle, those who feel some sort of larger obligation to this university, even in the wake of its leaders’ fundamental betrayal.

And so, as all this history shakes itself out, O’Brien is laboring with wire and string, burdened by a crisis he did not create, attempting to balance humility and defiance in the midst of a wave of national revulsion toward the school that now employs him. It is an impossible position, and the coach has chosen to respond to it by pushing forward with such force that the past — at least the football part of it — is already starting to feel like prologue.

On Saturday, Penn State hosted an undefeated Northwestern team, and Sam Ficken was still the starting kicker, because there are no other good options for O’Brien to turn to, and yet he has made this work in his favor: He has publicly endorsed Ficken while calibrating his offensive strategy to make up for Ficken’s obvious shortcomings, thereby turning a weakness into a strength. The Nittany Lions went for it on fourth down six different times against Northwestern, and converted on five; at one point in the fourth quarter, they went for it on fourth down while still in a hurry-up offense. So far this season, O’Brien has chosen to go for it 20 times, far more than any other program in the country; his team has converted on 13 of them. The Nittany Lions scored 22 unanswered points to come back and win 39-28 behind former walk-on Matt McGloin, and the fact that McGloin has become one of the most consistent quarterbacks in the Big Ten might be the ultimate proof that O’Brien — whose team has won four in a row after starting 0-2 — is the most talented offensive assistant coach Bill Belichick has ever churned out of his Wiccan cabal up in Foxborough.

Bill O’Brien cannot be a normal football coach because everything about this situation is utterly bizarre. He has not merely been charged with following a legend; he is following in the footsteps of a legend whose reputation has been cleaved into pieces.

I cannot stress enough what a break from the past this is. For decades, conservatism on the football field was a Penn State trademark, like the golf balls with Paterno’s face on them that were guaranteed to run up the middle three out of four times. I still don’t know if it’s fair to translate this fear of risk taking to what happened off the field, or to say that this fear of change, among Paterno and others, is what led Penn State to cover up for Jerry Sandusky on some level, but I will say there is an obvious metaphorical correlation. And at this point, I wonder if the metaphors matter, which is why I’m starting to think it is symbolically important that Penn State is fielding a team this season: Because otherwise we’d still be tangled up in the same arguments, and because at least it feels like a way to advance the conversation from problems to solutions, and because even the head coach seems aware of the relative unimportance of the games themselves.

“It’s football, man, it’s football,” O’Brien responded, when asked by Harrisburg Patriot-News columnist David Jones why he went for it repeatedly on fourth down rather than cocooning into an anal-retentive stance. His wife and kids, he said: These are things he truly worries about.

And so why the hell shouldn’t O’Brien take chances? The only way he perpetuates this program over the next four years is by setting it apart, and the only thing with which the Nittany Lions have to set themselves apart at this point — if I may paraphrase another risk-taking American — is that they have nothing, and therefore have nothing to lose.

It is possible Penn State will lose all six games they have remaining on their schedule; it is possible Penn State could win all six. The Big Ten is so inherently weak this season that the three best teams might be the one with the most inherent institutional disadvantage (Northwestern, whose continued moderate success under Pat Fitzgerald over the past decade is either the most remarkable story in college football or the most obvious sign that the Big Ten is the post-Empire conference) and the two (Penn State and Ohio State) who have been slapped by the NCAA. But I’m not sure the record matters as much for Penn State, both inside and outside of football, as the attitude does.

” … [F]or sheer audacity by a Penn State side and its coach, nothing I’ve seen here matches [last] Saturday,” wrote Jones, who has been covering Penn State for a couple of decades. It feels like a new topic of conversation, like something bold and forward thinking and free of orthodoxy. It may have even felt a little bit like hope, and a year and a lifetime have passed since we’ve been able to say that.