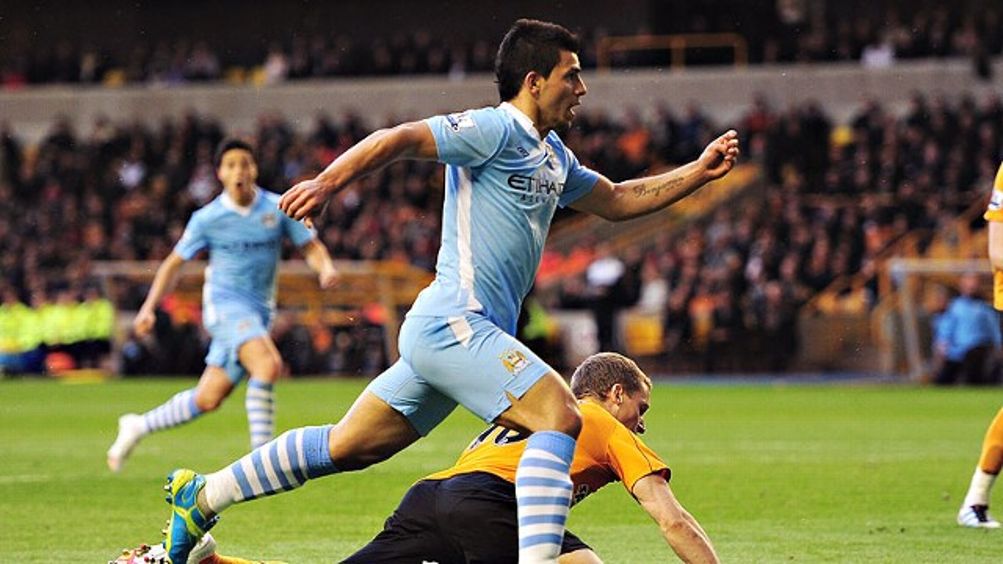 I will not invent light sabers. I will not be able to pull off the Ryan Gosling satin jacket from Drive if I decide to start rocking it. I will not grow old with the grace and dignity of John Slattery. I will not retire to an island off the coast of Dubai where I entertain myself in my latter days by watching robot greyhound races.

Secretly, I fully expect all these things to happen. Hell, if it works for Roberto Mancini, why can’t it work for me?

For the last couple of weeks, Manchester City manager Roberto Mancini has been insisting that his club has no chance to catch Manchester United in the Premier League title race. After finding out that United had lost 1-0 to Wigan, he was quoted on April 11 as saying, “The title race is finished because United is a fantastic team and they have a fantastic spirit.”

After United drew with Everton and City relegated Wolves, Mancini was asked if he still thought United would win the title, and in stories published on April 23 he said, “Probably … At the moment, we don’t have any pressure because we are not expected to win … You all wrote the title race was finished,” he said to journalists. “Seven days ago, the race was finished. You wrote it.” When I came across that last quote, I couldn’t help but think of the hunter in Jurassic Park:

On one hand, I don’t really believe in mind games. When Alex Ferguson negs Liverpool or Manchester City in a press conference I consider it a more measured, Scottish version of this …

I also find it equally entertaining. Look, at this point, I don’t think Mancini is playing mind games. He’s being superstitious. As soon as he started talking about United as presumptive Premier League champions, City started playing with a lot more spring in their step, winning three in a row. Were those games against West Brom, Norwich, and Wolves? Yes. But that doesn’t mean they weren’t enjoying themselves.

Mancini is enjoying himself, too. You can tell he far prefers the view from second to the one from first (for now). And he’s handling the pressure associated with the home stretch of the season far better than I thought he would. In the past, managers like Kevin Keegan and Rafa Benitez had broken under the pressure Ferguson surgically applied to their teams and their league positions. Mancini, a notorious hothead as a player and not exactly a Zen master as a manager, seemed primed to blow his top on the wily old Scot any day now.

So it was pretty impressive when Ferguson mused in an April 13 story that “At Manchester United everybody is used to the pressure for playing [for] the title. For the first in a long time City can become champions. That’s what’s breaking them. I’ve always thought that City wouldn’t hold the race. Their squad is out of balance, they’ve got too many individuals playing for themselves.” Mancini responded, amusingly, “I agree. That’s the reason we can’t win. They have experience, they are a fantastic team and we have nothing. Sometimes it’s not about balance. Football is strange. They are perfect and we are the opposite. But I enjoy being with my players, I am proud of them.”

About that United result …

• Ferguson decided to play Nani instead of Ashley Young, who was, no doubt, practicing his forward 1½ somersault in the tuck position. After saying he “had a word” with Young about his propensity for diving, Ferguson opted for the Portuguese winger over the young English talent. Nani repaid Ferguson with a goal and two assists. But watching Everton repeatedly work the left flank of United, going after Nani and left back Patrice Evra repeatedly, Everton right back Tony Hibbert, who doesn’t exactly turn the turf brown with the heat of his afterburners, looked like a much, much slower Dani Alves. But he still got two assists. Ashley Young is hardly what I would call a defensively attentive winger, but flank partnerships are just that: a partnership. There’s a lot to be said for the fact that Young and Evra had likely developed something of an understanding about who marks who (and when) in relation to the other’s forward runs. Too often on Sunday, Tony Hibbert was all alone in right corner of Old Trafford, with plenty of time to make out the figure of Nikica Jelavic.

• Speaking of Jelavic … the guy reminds of a pair of scissors. He’s got these long, snapping legs that provide him with a very unique ability to net goals from odd angles. He was giving United’s defense fits all day. The thing about the Croatian, who is new to the Premier League since January when he joined Toffees from Rangers, is that he combines a poacher’s instincts with an incredible work rate. Even when Everton was down, he was dropping deep to help defend, putting pressure on the shaky Evans or slot in the flanks when needed. He now has eight goals in 15 appearances. He’s a perfect Everton player. Hopefully they can keep him beyond this season.

Watching Arsenal and Chelsea play out a pretty cagey 0-0 draw on Saturday, I found myself staring at my watch — and not because it was so damn early on the West Coast (it really was) or the game was so paint-dryingly boring (it really was). I was doing so out of symbolic empathy for all the time Robin van Persie has put in on the field for the Gunners and Holland. He’s played more than 50 games for club and country this season, and he’s really starting to look it. After his club lost 1-0 to Queens Park Rangers over the weekend, Tottenham manager Harry Redknapp said, “We’re putting into players’ heads nowadays that they can’t play Saturday, Wednesday, Saturday because they’ll get too tired but I think that’s an absolute load of nonsense.”

Part of Redknapp’s charm is his whole “when I was a lad we used to live in shoeboxes and kick balls made of lead” routine. But he’s wrong. You can see the sheer wear and tear in van Persie’s game and you can see it in the form of Tottenham. Luka Modric has played 32 games in the Premier League; his midfield partner Scott Parker has played 34 in all competitions. Redknapp has a point that the congestion of these fixtures isn’t going to change anytime soon, but the players aren’t built like brick outhouses anymore. They’re lean, delicate machines, and slight ankle knocks and hamstring tweaks put them off their game. Redknapp should know better: Spurs’ success this season has been largely based on the pace at which they attack. You can see how the accumulated mileage on the legs of Modric, Parker, Gareth Bale, and others has thrown off the formula.

• Is Newcastle ready for Europe? Watching championship-winning clubs from Dortmund to United go out of the Champions League suggests that now, more than ever, it’s more difficult to advance without an incredibly deep squad. Newcastle’s starting 11 are admittedly spirited — if any team can transform, maybe it’s Newcastle.
In the last season and a half, Alan Pardew has overseen the English core (Joey Barton, Kevin Nolan, Andy Carroll, etc.) that secured promotion for Newcastle, then a squad that relied heavily on Demba Ba’s scoring, to the current iteration of the team that runs much of its attack through Hatem Ben Arfa, with Papiss Demba Cisse being the primary target in front of goal. It’s like he’s managed three different teams in 12 months.

One of the key performers for Newcastle this season has been Ismael Cheik Tiote, the Ivorian defensive midfielder. He’s been linked with United and Chelsea in recent months, but has insisted that his future lies with Newcastle. However, Newcastle is in a precarious position. To keep their better players (Ba, Tiote, Yohan Cabaye, Ben Arfa), they will desperately want to finish fourth and give them Champions League football.

One often hears managers talking about whether a club is “ready” for a phase of its footballing life. I remember Brendan Rodgers being especially cautious when Swansea got promoted last year, suggesting that the club didn’t yet have the infrastructure or player budget to support the leap. Obviously, Rodgers has worked miracles with limited resources.

Pardew wouldn’t risk angering the Newcastle fans by saying that Champions League football is coming too soon. The long-suffering Toon fans aren’t trying to hear that. But you wonder: Do Newcastle have the squad, or the owners willing to invest in the squad, to even compete in Europe? That being said, reaping the benefits and gaining the exposure that comes with Champions League would be perfect rewards for the Manager of the Year–worthy job Pardew has done. I’m definitely pulling for them (I’m also pulling for the night we get to see AC Milan visit Sports Direct Park — which is still St. James Park to me).

[0:28 into the highlights.] That’s a real Messi-esque move to cut across the box and launch one like that. Also, I like to imagine Sinclair is making “3 goggles” in his celebration (though I don’t know if that’s true).

The Bolton midfielder: “It felt almost like a dream. I could see Spurs players running around in the distance and two Scott Parkers and then two Luka Modrices. The last thing I heard was our defender Dedryck Boyata screaming at me to get back to help out in defence.”