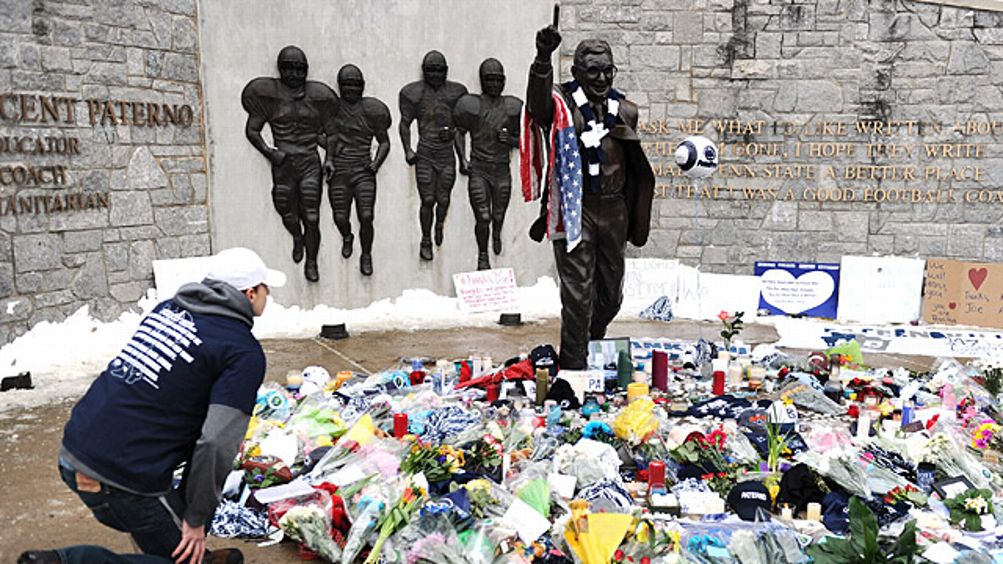 “Virgil’s ability to plumb the complexity of human affairs is a key to his greatness, a key to his relevance for us today. We live in an age in which simplistic versions of reality — simplified social and political perspectives, philosophical world pictures, moral principles — are privileged over nuanced understanding.” — From an introduction to Virgil’s The Aeneid, by Fred Will

“There is hypocrisy in me. And a little of the con man and actor, too. Look, I’m not trying to fool anybody. But I want things to be difficult. It’s more fun to win with handicaps. If you have the best players and no problems and you win, that doesn’t intrigue me.” — Joe Paterno, to Sports Illustrated‘s Douglas S. Looney, 1980

All great football coaches eventually fade into myth. These days, we attend Broadway plays about Vince Lombardi; we romanticize Al Davis as a countercultural icon and Woody Hayes as a Pattonesque disciplinarian raging against the rising tide of hippies. In the frenzy on Bourbon Street leading up to this year’s national championship game, Alabama fans born long after Bear Bryant’s passing found new and sartorially perplexing ways to appropriate houndstooth as a fashion statement. It is the nature of the job; in order to exert influence, football coaches have to appear larger than life. In death, they become muscular symbols of authority.

This is why it’s so goddamned complicated to write an obituary for Joe Paterno: His mythology was grounded in an utter lack of pretense. He was the football coach who lived in a modest house, with a listed phone number, whose preferred method of propulsion was the fullback belly play. He was the football coach who walked to work, who wore Poindexter glasses and flood pants, who became a towering figure because his whole ideal was based in the notion that football coaches should not become larger than life in the first place. Once, in college, a few of us student-newspaper reporters strutted through the locker room on our way to a press conference, and there was Paterno, waving at us from a urinal. We made him extraordinary for being ordinary.

That’s what’s been so perplexing about these past couple of months, for those of us who grew up around his Penn State football program: The final act of Paterno’s career was a fundamental contradiction, a repudiation of all we’d come to believe. We knew he wasn’t like us, but he made us think that deep inside he was, and maybe we were naïve for believing it in the first place, but that doesn’t make the shock and surprise about Paterno’s potential culpability in the Jerry Sandusky child-rape allegations any less real.

There is, obviously, nothing inherently surprising about Paterno’s death: He was an 85-year-old man with cancer in his lungs who had just endured the worst emotional shock of his lifetime. The Sandusky charges (and Paterno’s firing in the midst of the university’s reaction to them) were included in the first paragraph of his New York Times obituary; it is an overstatement to say that he was killed by events rather than by biology, but it is a poetically tragic twist for a man who embraced the complexities of Virgil’s Aeneid — whose hero values a higher purpose above his own happiness — while a teenager at a Brooklyn Catholic school.

A few months back, before the Sandusky scandal broke, I e-mailed William Peter Blatty, the writer of The Exorcist, who was a couple of years behind Paterno at Brooklyn Prep. Like everything else that was written about Paterno before November 2011, it now seems sadly ironic. “I cannot recall one of my classmates — okay, then, maybe one — who weren’t what I now perceive to have been total innocents, including Joe and (his brother) George,” he wrote me. “Sad thinking about that, really — where can you find Joe DiMaggio today? I think it stops at Joe Paterno.”

I picked up my own version of the Paterno story on August 17, 1978, the day a Bekins moving van angled into the driveway of our new home in State College. I was 5 years old; by then, of course, I was more the innocent than Paterno. I do not remember how long it took me to figure out who he was, but I know it wasn’t very long at all. I discovered him at an impressionable age: Even though I never knew him, it’s not an overstatement to say that if it wasn’t for Paterno and his football teams, I might not have become a writer, and I almost certainly wouldn’t have become a sportswriter.

Even then, the coach’s likeness was a pervasive presence in store windows downtown, but he was not yet universally beloved. He was a source of both consternation (for his conservative play calling; golf balls with Paterno’s likeness were guaranteed to run up the middle three out of four times) and idolatry (for the seeming sincerity of his Grand Experiment, that balance between academics and big-time football). Fourteen days after we arrived in town, he commenced his 13th season as Penn State’s football coach, won 11 straight games, and then lost the national championship on a goal-line stand in the Sugar Bowl, a defeat so crushing that it clouded Paterno’s vision for several seasons afterward.

But that’s when it got interesting: In 1979, Penn State went 8-4, and one player was arrested for rape and another for drunk driving, and several were declared academically ineligible, and star defensive tackle Matt Millen quit the team in the middle of a conditioning drill. The whole Grand Experiment was called into question, not for the first time and (obviously) not for the last. “There are a lot of people who think I’m a phony and now they think they have the proof,” Paterno told SI‘s Doug Looney, and that became the headline of the story.

Yet Paterno somehow righted the program, as he often did. Success transformed his ordinariness into a fable of its own. In 1982, he won his first national championship, and four years later, he won another. His ability to adjust to changing epochs and new generations of college students was remarkable; in every decade from the 1960s to the 2000s, he had at least two 11-win seasons. Did he stay too long? Of course he did. Was he often controlling and authoritarian and bitterly afraid of this day coming too soon, the way it had for Bear Bryant shortly after his retirement? Of course he was. This hubris, this encroaching fear, especially in his octogenarian years, was his tragic flaw; it was evident in that heartbreaking final interview with Sally Jenkins of the Washington Post, when a man schooled in the classics pleaded ignorance about men and rape.

The ending will simplify the vision for some, but if there’s one thing we should take away from the life of Joseph Vincent Paterno, it’s that his reality was never as facile as it will become now that he is gone. He may have grown into something larger than life, but he was also the first football coach who truly symbolized complexity and nuance, and in that way, he will always be more man than myth.