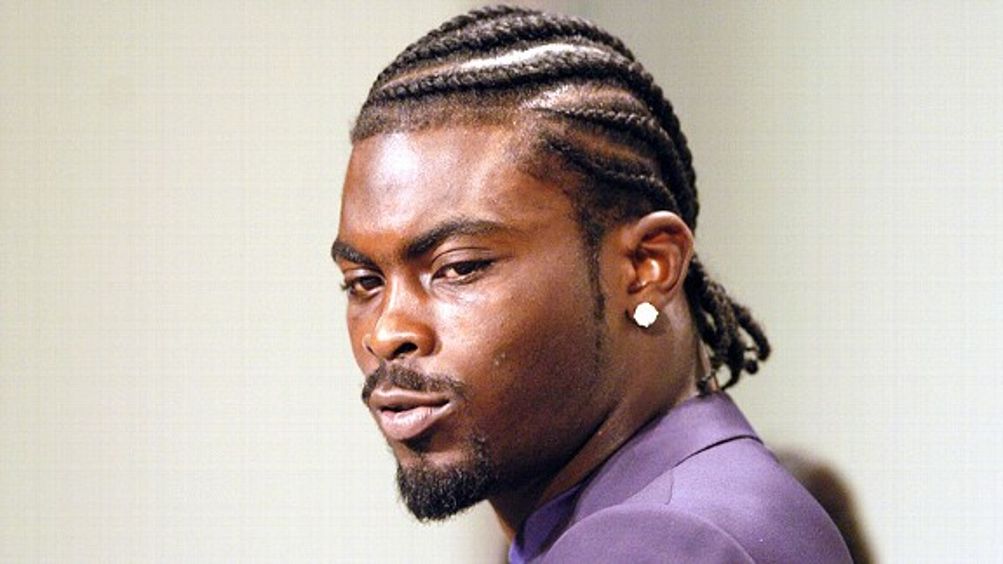 In a Week 3 loss to the New York Giants, Michael Vick did something to his hand. Actually, Chris Canty hit him after a 23-yard pass, so it was Canty who did something to Vick’s hand. The injury — a bruise — prompted Vick to spend his postgame press conference openly concerned that the referees weren’t giving him the same protection they provide other quarterbacks. The injury was worrying for his football. Would he still be able to throw? It was also worrying for his hair. Would he still be able to brush it?

The source of Vick’s game is not his short, neat haircut. It’s the freedom to abandon pocket protection, to juke and throw and run like crazy. But in this season’s haircuts you can catch signs of trouble. The waves in it aren’t as prominent as they were last year, when the team managed an exciting season on the back of Vick’s gutsy athleticism. We’re only six games in, and the blame for the Eagles’ shocking 2-4 season is hardly Vick’s alone. But you look at that hair and notice that with each passing week the hairline is crooked, that last year’s striking tightness and the curling pattern of those work-of-art waves are fading into something that’s vaguely more unkempt, uncertain, and less confident. Hair that’s maybe losing its patience.

Having waves is one of the classier things a guy can do with his hair. Women like it. Men respect it. It’s ageless. It never goes out of style and can say, despite everything else, “I care.” Caring, in this case, can suck. Like most black hair-care decisions, it’s an annoying commitment. Wave maintenance is like having to burp a baby. Constantly. For weeks. You brush and brush and brush, and you’re still not sure you can see anything. Sometimes it’s all sheen and little etching. There are days when you don’t feel like picking up a brush and inspecting to see if the pond on your head is rippling. There are nights when you don’t feel like massaging your scalp with pomade or putting on and tying up a nylon stocking — the wave cap — before you fall asleep. I’ve never had a concussion, but Vick was recently concussed during a Week 2 loss in Atlanta, and I imagine that the last thing you feel like doing after a head injury is resuming the painstaking process of harvesting hair waves. Yet if what we’ve seen in these postgame press conferences and with Vick helmetless on the sideline is to be believed, the waves are a kind of mojo, and, for the moment, the mojo’s elusive.

Vick’s hair has always been statement hair. In 2004, before all his legal trouble, when he was still just the Falcons’ promising quarterback and the recipient of the most lucrative deal in the history of the NFL, he vowed not to cut his hair until he won a Super Bowl, and so a short haircut became a bumpy, messy Afro. Eventually, the Afro became a flamboyantly Iversonian assortment of cornrows. When the news surfaced, in 2007, that Vick’s Virginia home was part of a dogfighting operation, the cornrows became a flashy incrimination. He must have known that the hair said “guilty.” It was gone by the start of the season, and the house was on the market.

Years of police lineups, local news reports, Snoop Dogg, and Snoop from The Wire have conflated cornrows and crime. If Allen Iverson had played basketball with different hair — one that doesn’t make some moms frown and certain white people nervous — he might have been the enormous star his enormous talent should have made him. Vick seemed to know that nobody would look at his cornrows and think about Rick James gyrating behind a bass, the cover of Stevie Wonder’s Hotter Than July, or, heaven forbid, David Beckham. They would think he was a dogfighting thug. So until he was convicted and imprisoned for being just that, he tried to reroute his image with a shorter, sharper, seemingly more professional haircut that, when he emerged from prison in 2009, was handsomely ridged.

At the time of his imprisonment in 2007, Vick was the most loathed man in America, briefly bumping George W. Bush to no. 2. Two years later, he was released, rehabbed, and ready to return to the NFL. Conventional wisdom (also known in bars, Barcaloungers, and locker rooms as “haters”) said he would never play again. But not only did Andy Reid’s halfway house Eagles take him in, they eventually cut loose Donovan McNabb and essentially had Vick waiting in the wings for their designated starter, Kevin Kolb, to forget his lines, which, amazingly, he managed to do. Vick took over and, of course, the electricity of his play was astounding. After the Eagles’ 59-28 undoing of McNabb and the Redskins in Week 10, then his heroic stand against the Giants, Vick’s football appeared to be fully rehabbed. Next would come his image.

A lot of people — Vick, his agents, his Philadelphia Eagles, the broadcast networks — were hoping that after his season, we’d be in a more forgiving mood. These people were shrewd. Before Thanksgiving 2010, Vick made his way to New Haven to speak to high school students. (Between that and LeBron James’ press conference to announce his move to Miami, Connecticut has become ground zero for staged professional sports happenings. With ESPN and the WWE headquartered there, but with no professional team to speak of, it’s the Washington of sports — lots of bureaucracy, little actual representation.) Thanksgiving week is the ideal time to ask people to accept how much you’ve changed. So in his low mumble, Vick informed star-struck audiences that he was sorry and that dogfighting ruins everything. Except apparently with Vick, “everything” didn’t seem entirely true.

This brings me to a November night of last year, and the thing that I otherwise wouldn’t ever mention but that happened and bothered me. It was the Tuesday after his entertaining performance against the Giants. He’d just spoken to the students, and Nightline was next. Nightline could have sent anyone to interview Vick. It’s true that Cynthia McFadden was finishing her celebrity-plastic-surgery special and that Bill Weir was making a soul-deadening homemade report on how to deep-fry a turkey (honestly, those stories might be the journalistic equivalent of dogfighting). And Terry Moran was stuck in the studio. But, really, truly, it could have sent anyone. ABC has a sports department full of journalists. But to interview an improbably resurgent Michael Vick, Nightline chose what, in moral matters, can only be considered the nuclear option. It sent Bob Woodruff.

Bob Woodruff was the ascendant, perfect-looking television reporter who’d just inherited Peter Jennings’ seat on World News Tonight when, while on assignment in Iraq in 2006, he and a cameraman were nearly killed by a roadside bomb. He spent a long time in the hospital and made his recovery, which included a cranial reconstruction, available for the public to see. He became a champion of injured and undertreated combat veterans. He was their still-handsome face. He hosted an environmental cable show and made it possible for Katie Couric to not be the only woman anchoring the nightly news. He didn’t plan for Diane Sawyer to have his job, but his halo has cast even that development in a chivalric glow. This is all to say: Bob Woodruff is an American hero.

ABC News sent its hero to interview the man who killed the dogs.

They sat there in adjacent seats of a school auditorium, two men who’d had radically different near-death experiences, both in the middle of unexpected and heralded second acts. It’s presumable that Vick knew Woodruff’s story. Everybody knows his story. Woodruff’s face still bears the scars. Either way, it was slightly compelling that Vick’s redemption tour, complete with support on-site from the Humane Society, which once condemned Vick but has now forgiven him, would include a sit-down with the angel of ABC News. Nightline had to know the moral divide between these two. The piece’s intro allowed you to make the contrasts and draw parallels if you were so inclined, but Woodruff asked tough questions yet wasn’t tough on Vick. Within a few seconds, it was clear he didn’t need to be.

Michael Vick conducted the entire interview with a piece of something in his hair. It was small and white. Yet, even on a tiny screen, it was as big as Billie Holiday’s gardenia. Maybe it was chalk. Maybe it was lint. It was removable, either way, and yet no one removed it. So there it sat for about six minutes on national television and forever on the Internet. Had this ever happened in the history of the taped sit-down interview? Surely someone had to be available just off camera to pick the speck out of Vick’s hair.

One of the most endearingly polite things you can do for a friend or a stranger is let him know he has, say, parsley in his teeth. Not to do so can be innocent. Often it is. But, occasionally, allowing a person to spend a whole day with an upturned shirt collar can also constitute an act of malice. Everyone wants to be told to turn down the collar. Woodruff was inches away. He was talking as much to the speck as he was to Vick. In saying nothing, Nightline was saying everything: You might be on top of the world right now, but there’s something in your hair — and we’re leaving it there. The road to redemption is paved with little such specks.

There’s been a lot of debate about whether his complaint about protection from the officials is a fair or legitimate one. If you see things from his point of view, letting men hit him after he’s thrown the football is the officiating equivalent of letting the speck stand. The frustration in his voice belongs to a player who no longer expects redemption, but is frustrated with having to plead for common respect. During that Week 3 press conference, the one about protection, Vick kept stroking his hair. In one sense, he was simply smoothing it out, brushing it with his hand, making waves. In another, he knows the only person he can trust to remove future specks is himself.