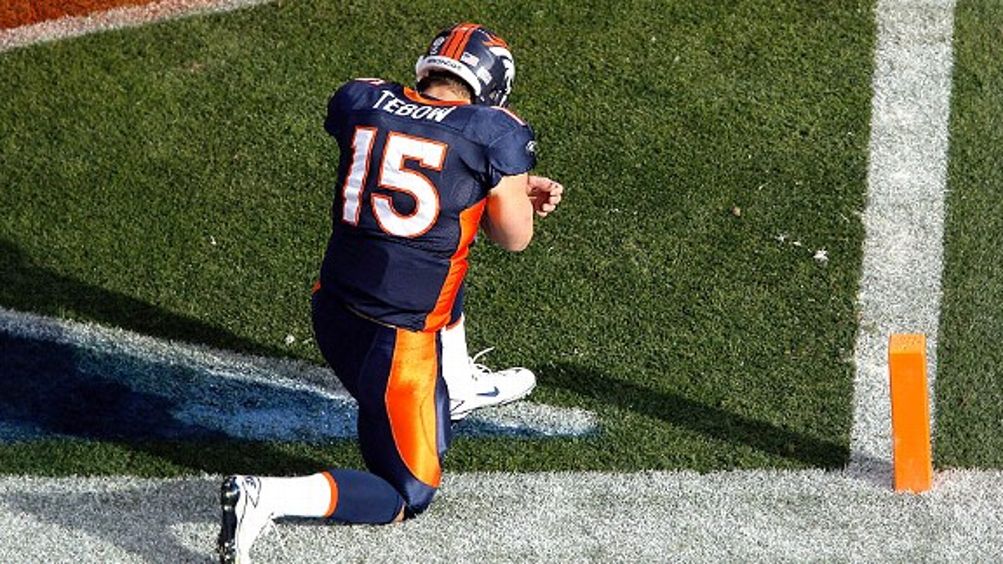 Tim Tebow, Converter of the Passes

“Here’s how I think it works, this Tebow madness.

Grantland’s Coverage of Game 6 of the World Series

Can the Rangers Bounce Back? ♦ Game 6 Revisited ♦ Lance Berkman Finally Right About Lance Berkman ♦ Why Rangers Fans Should Take Heart

Grantland’s staff breaks down one of the best World Series games ever.

Injustice For All: The Lou Reed/Metallica Album

“The universe is predisposed to hate this new Lou Reed/Metallica album, Lulu, and I totally understand why. It’s not really designed for people who like music. It sounds like what it is: an elderly misanthrope reciting paradoxical aphorisms over a collection of repetitive, adrenalized sludge licks. Anyone who tries to suggest it’s surprising in any way needs to reexamine his or her propensity for being surprised. I’m sure there will be a sector of Metallica’s core audience that feels ‘betrayed,’ mostly because Metallica fans enjoy the sensation of betrayal. I suppose a handful of Lou Reed obsessives will consider this record hilarious as long as they don’t have to listen to it, and I’m certain some contrarian rock critic will become Internet Famous for insisting it’s more subversive than Transformer and a musical reaction to both Occupy Wall Street and the subpar drum production on St. Anger. It will be legally purchased by the 13,404 Metallica completists who saw Some Kind of Monster on opening weekend, unless the album is exclusively sold at Walmart, in which case it will enter the Billboard charts at no. 2. Rolling Stone will give it 2½ stars and then pretend it never happened; meanwhile, people who thought The ‘Priest’ They Called Him was a brilliant idea will hold a vague, misplaced grudge against Dave Mustaine while sleepwalking to the methadone clinic.

The Best Sports Section in History

“To indulge in a cliché, I left sportswriting but sportswriting never left me. And to best sum up my career at the Globe, I’d like to offer a comparison to baseball. In 2004, the Red Sox added a young pitcher from Double-A Binghamton to the roster who finished the 2004 season 0-0, with a 4.23 ERA in 22 games. His role in the team’s success was marginal at best, but he was there when the miracle happened. He had a front-row bench seat to greatness. He was part of a World Series championship team.

“I am the Lenny DiNardo of sportswriters.”

“I have little doubt that someone will declare the return of Beavis and Butt-Head to MTV evidence that America’s favorite dumbasses are ‘timeless.’

“In fact, I suddenly have zero doubt, because I just now Google-tested this notion to find the guileless Mike Judge quoted this month in the New York Times Magazine: ‘I like to think they’re timeless.’

“So, yeah, I can’t argue with that. But I don’t think it’s entirely accurate. The enduring relevancy of Beavis and Butt-Head really means they’re ‘ageless.’ And, by their reflection, that we are, too. We, being the middle-aged, American, middle-class males whose culture has been defined by stuff that sucks and stuff that’s cool.”

Breaking Down the Suck for Luck Campaign

“Seven weeks of football have narrowed down the suitors for Andrew Luck to three teams: the Indianapolis Colts, St. Louis Rams, and Miami Dolphins. According to Football Outsiders, which simulates the season 20,000 times after each week to estimate each team’s likeliest record by the end of the season, those three teams have the following odds to get the no. 1 pick: 33.2 percent (Colts), 26.3 percent (Rams), and 24.3 percent (Dolphins). Each of the three has a drastically different situation at quarterback and, therefore, different questions to ask themselves if they end up with the first overall pick. We’re here to break down those questions.”

The Cult of Jurassic Park

“Enough about Star Wars fanboys. The Jedi Council is adjourned until there’s something new to bitch about. I’m here to talk about a rarer specimen: the Jurassic Park fanboy. We — yup, we — are out there. We have a tender-verging-on-deranged love for Steven Spielberg’s dinosaur epic, which is just out on Blu-ray. Consider the following:

“Exhibit A: A midnight screening of Jurassic Park in New York City this summer. The seats are filled. Just as the movie begins, a drunken, amorous couple barges in and starts screwing around. The guy, judging from his insipid giggles, is sitting on the woman’s lap. A Jurassic fanboy’s voice fills the theater. He — and here I’m picturing an early 30s hipster in a T-shirt about as ironic as my own — sounds pissed. He threatens to throw these idiots out of the movie and back into The Tree of Life.

“Exhibit B: Are you a ‘Single Interested in Michael Crichton?’ Meet the love raptors stalking OkCupid.

“Exhibit C: Ariana Richards played Lex Murphy — the blond girl in the purple baseball cap — in the 1993 movie. When Ariana goes out these days, she often sees a young man gaping at her in the same way Sam Neill once gaped at a Brachiosaurus. ‘I’ve come to know the signs well,’ Ariana tells me. Jurassic Park, incidentally, was filmed when Ariana was 12.

“I could go on. Suffice it to say, it’s time to back into Jurassic Park. Hold on to your butts.”

“As a Patriots fan for the past four decades, I rooted for the great Tom Brady, the sometimes-great Drew Bledsoe, and the always-dreadful Marc Wilson. I rooted for Matt Cassel during the year when He Wasn’t Tom Brady. I rooted for one of the softest QBs who ever lived (Tony Eason), as well as the one of the toughest (Steve Grogan). I rooted for the immortal Scott Zolak in a playoff game. I rooted for Doug Flutie, watched him stink for the Patriots, then spent the next two decades in total denial that it happened.

“I rooted for a QB who only had a quality nickname going for him, but the nickname was so much fun, we didn’t even care if he sucked (the Hughmillenator, Hugh Millen). I rooted for Jim ‘Total Bust as the No. 1 Overall Pick Even Though It Wasn’t His Fault Because His Line Sucked’ Plunkett before he became Jim ‘Super Bowl MVP Plunkett. I rooted for Matt Cavanaugh, and then, I rooted for him to get traded. I rooted for Bob Bleier during the ’87 scab games. (That’s right, THE Bob Bleier.) I rooted for Michael Bishop every preseason and fully expected him to turn into the next Randall Cunningham. (Never happened.) Apparently I rooted for Tom Owen, Tom Ramsey and Scott Secules. I barely remember this. I definitely remember rooting against Millen, Zolak, Tommy Hodson and Jeff Carlson when we needed to bottom out for the top pick in the Mirer-Bledsoe draft.”

Believe It or Not, It’s Just Me: Batman: Arkham City

“In some ways the Christopher Nolan films were the best and also the worst possible thing to happen to Batman. They were so good that they allowed us to believe that Batman could be taken seriously not as pop mythology but as flesh-and-blood character. When Arkham City‘s Batman happens by the site of his parents’ murder scene, the game allows the player to pause and pay his respects, which would be a nice touch if the moment were not made to seem as momentous as Christ arriving at Golgotha. I came to the end of this excellent game with the sensation of having watched unimaginably talented people take a character more seriously than the character can comfortably withstand. Arkham City‘s Batman exudes a kind of seriousness that seems less serious the more seriously you consider it. Am I alone in wanting to play a game this good about something other than a dude in a batsuit?”