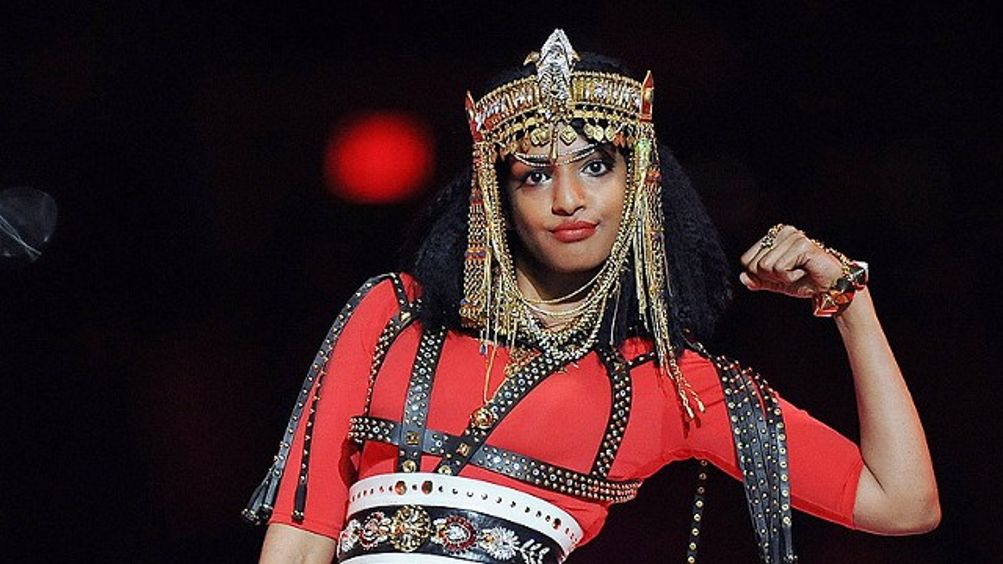 A couple weeks ago, M.I.A. debuted the video for “Bad Girls,” a year-old song from a mixtape inspired by WikiLeaks, though the songs aren’t actually about WikiLeaks. The video is filled with images of stunt-driving, young Middle Easterners in caftans and kaffiyehs. Presumably it was bankrolled by her record label, Interscope Records, which is owned by Universal, which in turn accounts for between a quarter to a third of the global music market. It was directed by Romain Gavras, a strikingly talented Frenchman who can make scenes of faraway desperation look like the most beautiful, mysterious cologne advertisements ever. The video first aired on Noisey, an online music channel run by VICE, the media hegemon that has parlayed its fuck-not-giving ethos into partnerships with an impressive roster of multinationals. For some, “Bad Girls” will be further confirmation that ornate scarves, wind-carved deserts, and Arabic script are cool. For others, it will no doubt inspire a deeper investigation into globalism and globalization, feminism, the politics of oil, our influence in the Middle East, a career as a graduate student, etc. But for anyone invested in M.I.A., even on just a superficial level, it’s hard to reconcile the new video with where she ended her week: onstage at the Super Bowl halftime show.

She performed alongside Madonna, Nicki Minaj, and a cast of hundreds. Rarely has playing the Super Bowl seemed like a brazen, risky move, but there is no going back once you appear on network television’s highest-profile night, on a stage that’s been graced in recent years by a murderer’s row of people you weren’t sure were still alive. Is there a greater sign of having accepted one’s place in the mainstream? Her appearance, which was neither an invasion nor an occupation, neither radical nor chic, forces us to ask: Is it still possible to “sell out?”

A very “1990s” question, I know. Things no longer need to be qualified as “alternative,” since that word barely retains any of its original meanings. The logic of product placement and branding has become second nature, and artists today can make a living in a host of unprecedented ways only tangentially related to selling records. We’ve grown accustomed to how deeply entangled the interests of art and commerce have become — the way a sitcom can be meta and experimental while convincing you that you desperately want a McFlurry.

This kind of clever paradox has always been fundamental to the idea of M.I.A. The fact that she didn’t immediately fit into any ready-made categories lent her an air of opposition. She was a pop freedom fighter, uttering radical sayings and writing songs about pulling up the poor. But if you didn’t want to buy into any of that, you could point to all the ways in which she was a hypocrite or ill-informed or only half-committed. And because of it, she is the rare kind of pop star whose persona remains worth dissecting and debating — which counts for a lot nowadays.

As I watched M.I.A. at the Super Bowl, looking slightly awkward, I felt a sense of anticipation — or was it hope? Was she simply going to go through the motions? Was she going to look purposely stilted and bored, as though to lampoon this self-important event? Would she reach into the crowd and pull a scraggly 99 percenter onstage with her? There are those rare moments when you watch live television and you feel something is about to happen. You notice opportunities when things could go off-script — like when Mike Myers threw to Kanye West on the Katrina telethon, or any moment from a late-’90s Rage Against the Machine performance on MTV. At the end of her pro forma stint on a moribund new Madonna tune, M.I.A. looked in the camera and flipped the bird. Along the continuum of public controversies, a middle finger probably ranks somewhere between the S-word and the F-word, far below a cogent political statement or a bared breast.

The non-statement worked, though. The originating YouTube page for “Bad Girls” is now a global conversation on her middle finger and what she (or it) represents. The fierceness and snap-quickness of these judgments are a sign of the times, and everyone is basically right: She’s subversive and she’s not, she’s original and she’s a thief, she’s sold out and yet success has only made her more unpredictable. One imagines that somebody saw her on the Super Bowl, went online to follow the fuss, and saw an astounding video of women in burkas dancing, see-through cars cutting through the night, and M.I.A. filing her nails atop a skiing BMW. They didn’t care who paid for it, when the album was dropping, who “Madonna” was, or what a truffle fry tasted like. They just watched and felt amazement that this was happening somewhere else in the world.

To return to this question of “selling out” is to remember the days when the pop marketplace seemed to pose more ethical questions than at present. I’m not sure I believed that Kurt Cobain, as the T-shirt he wore to a Rolling Stone cover shoot claimed, truly felt that corporate magazines “sucked,” or that EPMD wouldn’t have allowed their “hardcore funk” to cross over had they been given the right opportunity. But up until the late 1990s, not “selling out” was still a gesture worth making, even if it was ultimately a naive one. Part of this was because it was once more or less unimaginable that unusual music, movies, or television might one day “win.” Fear of the crossover was more tangible when it seemed inconceivable that corporations could actually underwrite “creativity” or that interesting, independent artists might be asked to endorse all sorts of devices and beverages.

This isn’t to say that we’ve surrendered the conversation about integrity, or to suggest that people aren’t still fighting the same fights against artistic compromise. Or something like that. On Sunday, Justin Vernon of Bon Iver was awarded the Grammy for Best New Artist, the inevitable outcome after the fiercely indie singer/songwriter had reverse-jinxed himself by dissing the awards months prior. At the time, Vernon spoke fatalistically about his own integrity, as though it was a heavy burden to bear, describing himself as someone who preferred “glory” over the spoils of victory (awards, getting laid, etc.), even if it meant a career spent toiling in obscurity. The unkempt beard, the utilitarian clothes, those naked songs: This was a man uninterested in “selling out,” a man whose faith in friends and fans close-reading his lyrics by moonlight and the D.I.Y. economy was strong.

There was a reluctant, embarrassed air to Vernon as he approached the Grammy podium to accept his reward. He seemed as though he had given his acceptance speech some serious thought, but had wanted to stop short of seeming “prepared.” “There’s so much talent out here,” he remarked, “and there’s a lot of talent that’s not here tonight. It’s also hard to accept because, you know, when I started to make songs I did it for the inherent reward of making songs, so I’m a little bit uncomfortable up here.” Is the “inherent reward” what is compromised when someone tries to make something that is marketable? Can one be corrupted after the fact, if an “inherently rewarding” moment of songwriting manages to go pop?

What was so striking about Vernon’s nervous self-effacement was how deeply self-conscious this made him appear — this, on a night in which Dave Grohl waxed poetic about recording the latest Foo Fighters opus in his “garage” and a Beach Boy felt it necessary to wear a cap that read “Beach Boys.” Vernon’s anxiety seemed quaint, almost pure in its seeming belief that the world could be so simple. But the question of selling out always requires there to be an aggrieved party, someone to whom you are accountable. For Vernon, the only person he was disappointing was the version of himself who thought it impossible that the Grammys might one day recognize him.

Maybe the rise of “alternative” culture solved the question of “selling out,” or maybe the concern just shifted elsewhere. Nowadays, it seems like the question has become what these maneuvers might allow you to do. We’re clearly still hung up on authenticity, still disappointed when someone proves to be a hypocrite or more complex than we might expect. This is why we can snicker at Lady Gaga’s yearbook photos or chuckle at the pure transparency of Coldplay and Drake. You might not believe that M.I.A. knows what she’s talking about, but her artistic vision — those arch, voracious songs, the bootleg fabrics — delivers us somewhere else. This is what makes M.I.A.’s protest-in-the-name-of-what-exactly? so riveting, “important,” and almost prophetic. She flatters our desire for authenticity, for a real spokesperson who apprehends the full circumference of the planet, and then she goes and makes a bright, gaudy T-shirt of it all. If she has sold out — if she represented anything in the first place — then she’s shown us exactly what our dollar can buy: an absolutely stunning video starring some of the Middle East’s finest stunt drivers.