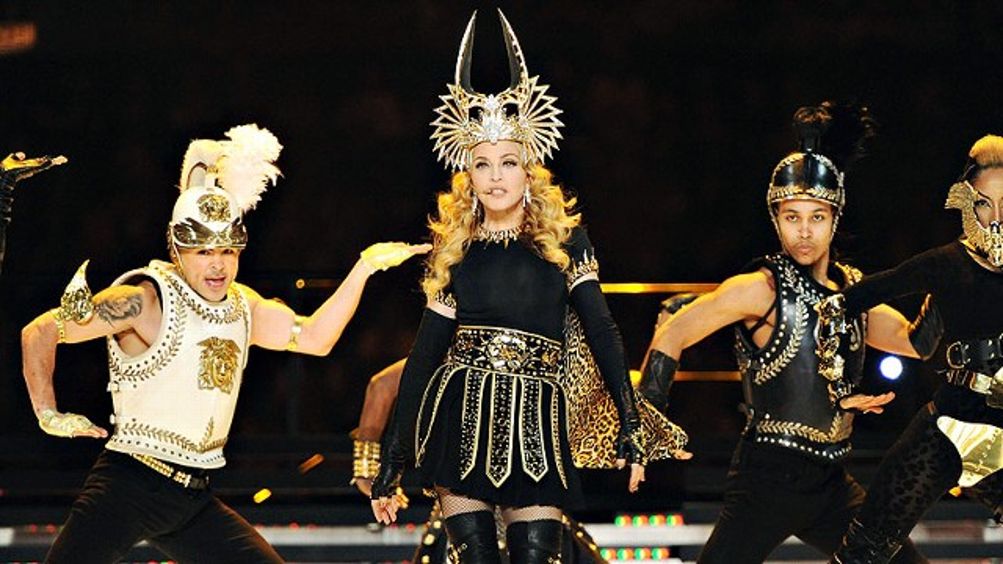 In most male sports and some movies, it’s entirely possible to not notice that sometimes the grabbiness, emotional intimacy, and prolonged contact is absurd. It’s possible to watch 300 and think, with a straight face, that it’s just the greatest man-to-man combat movie ever made, that there’s nothing gay about a bunch of half-dressed warriors battling for control of some place called the Hot Gates. Madonna is not one of those people. Madonna is Miss Hot Gates 1984-1995. She probably watched 300 and thought it needed another zero. So last night during her Super Bowl halftime show, there that zero was.

A phalanx of muscled gladiators brought her to the stage on a Roman float (the guys in 300 were Greek, but let’s not mince civilizations), and she opened the show with “Vogue.” Unlike previous halftime acts, Madonna doesn’t have a “Let’s Go Crazy,” a “Start Me Up,” or a “Let’s Get It Started.” She has a no. 1 hit inspired by a poor, black, gay underground that held drag balls inspired by old Hollywood glamour and Dynasty. Madonna kicked off her halftime show with that. She lip-synched the show in a way that turned her into a drag queen doing herself, and cleverly remixed the song so that “ladies … fellas” became just “ladies.” Vogue cover boys struck poses on the field of screens at her feet, while her costume people gave us a taste of how the Caesars Palace version of Eyes Wide Shut might go.

Next, she brought out some impressive parkour B-boys and one wire-dancing gentleman in a toga from Cirque du Soleil who made the world grab its collective crotch. She featured a bland new song whose best parts are rapped by Nicki Minaj and M.I.A., two women as subversive now as Ms. Hot Gates used to be. (M.I.A. actually gave the finger to the cameras.) And to close the whole thing out, Cee Lo Green, a marching band, and a choir showed up for what became “Like a Prayer.” Then, in a blast of silent-movie fog, Madonna was gone.

She had come to Indianapolis to feminize, kitsch, and queer the Super Bowl, and by that measure her 12 minutes were a success.

She had come to Indianapolis to feminize, kitsch, and queer the Super Bowl, and by that measure her 12 minutes were a success. Madonna’s genius as an artist has been to remove subtext and eliminate the underground, to put everything out in the open. (I mean, she published a sex book called Sex.) This doesn’t mean she is free of mystery (do you understand “Like a Prayer”?), but, for decades, her entire point is that everything good and important should be mainstream. No one should hide or be hidden. There is no shame in whoever you are.

It’s true that this message was more exciting coming from a 33-year-old Madonna than from the current 53-year-old version. But I’d rather get it from her than from, say, the importantly self-important Lady Gaga, Madonna’s most aggressive acolyte. With Gaga, every anthem is a hashtag. With Madonna, the anthems have actually lasted. At the height of her powers, Madonna wouldn’t have been asked to go near the Super Bowl (as Gaga today would never be), but last night was a reminder that she’s far from irrelevant.

She knows that she and football have nothing to do with each other, but her show managed to embrace womanliness and flamboyance in a way that didn’t affront masculinity. Nothing homosexually gay happened on that stage. But it seemed to liberate people who watch sports both casually and obsessively to observe, with what sounded like a degree of amused catharsis, how gay Madonna’s show felt. For a moment, we got a break from “no homo.” Still, you wonder whether Elton John, George Michael, or Adam Lambert performing the same show would have produced the same sense of relief — or just panic. That’s not Madonna’s barrier to break. That’s the NFL’s.

Madonna’s 12 or so minutes didn’t feel entirely strange. They felt safe, and in that safety, the show was actually fun. Nearly everyone in the Boston bar where I watched the game was into it, even the big, stressed-out white guy in the Patriots sweatshirt who just knew New England would lose — that guy pointed at one of the 52-inch monitors and mouthed, “Come on. Vogue.” As Madonna would put it, that’s music. But with her, it’s always slightly more than that. We’ve had almost 30 years of Madonna. And I’d say she’s proven as integral to our understanding of self-expression as the Children’s Television Workshop.