Ode to the War Daddies 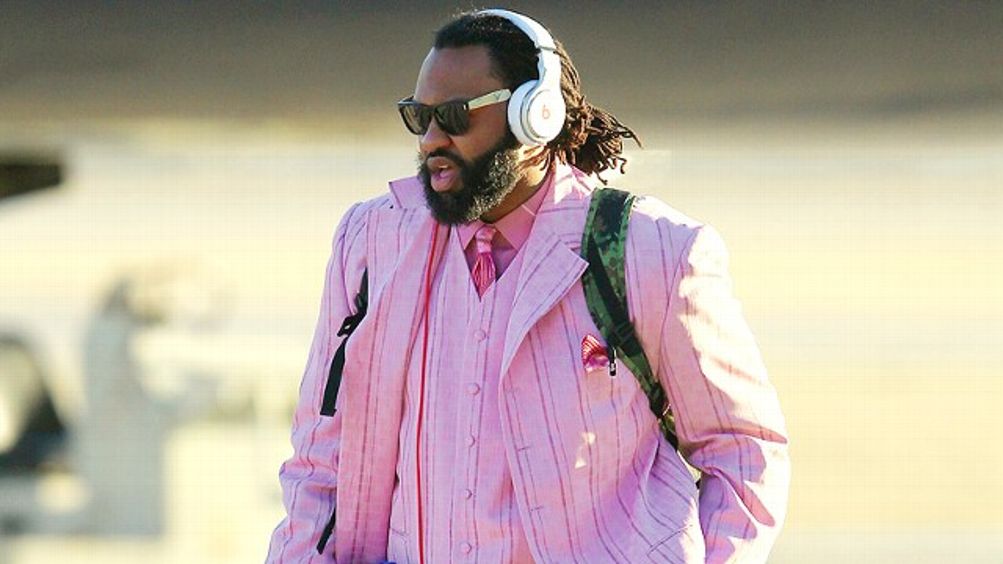 I have two friends who developed this theory about the clothes you see worn in Los Angeles. No one dresses for other people. Not really. They dress for their cars — to accessorize with them, maybe — but mostly to compensate for having to be in them for so long. They dress for the permanent condition of indefinite traffic. Tight jeans are more for the subway than the highway.

In Los Angeles, people also dress for having been in the car for so long. This is how you wind up seated at a nice restaurant next to a table of attractive men in trilbies and blazers worn over jerseys and sweatpants. The attention to detail is different from a metro culture, where people can admire, up close, the stitching and tailoring and lining and layering, where subtlety is a reward. According to my friends’ theory, subtlety doesn’t exist in Los Angeles. It can’t afford to. You have to be seen from everywhere, including, apparently, from outer space.

I think this applies to people who spend a lot of time in uniforms. When they’re not in one, they tend to overdo it. Football is an especially unique example, since I imagine the appeal of dressing like a civilian is in correcting for the brutality and violence of the sport, of inhabiting the glamour and nattiness of which football necessarily deprives its participants. A player might really, really want the world to see a more presentable image. These guys went to college and wound up in the NFL. When you see them out of uniform, you’re seeing a kind of snazzy career fantasy of a road not taken.

A suit would be a vacation from the pads and snaps and tape and buckles and straps and laces. When you don’t have to wear any of that stuff, you so don’t want to wear it. You don’t want to wear it so much that it’s tempting to wear the opposite of clothes that restrict, compress, protect, cover, and bind. Football is often compared to gladiating. But gladiators didn’t need help suiting up. Gladiators wore skirts — and sandals. So there’s also that.

Still, the result of this excitement over being able to wear civilian clothes is that you can look like you’re overcompensating. A week before the Super Bowl, some of the Patriots and a few of the Giants were doing just that. In a sense, it’s understandable. The Super Bowl is the league’s best Sunday, and so the players arrived in the host city in their proverbial Sunday best. The departures and arrivals are a big deal, and the teams dressed accordingly. But to thank fans who wore snowsuits or nothing more than body paint to see them off, they were probably overdressed. The Patriots were gaudy. The Giants were staid but tacky.

These guys knew this would be the one day during the week’s circus that they’d be free of their uniforms and ready for a close-up. Some of them opted for statements — actually, Tom Brady and Eli Manning opted for understatement, partially in brown. A lot of them were simply shouting. I’m going to the Super Bowl! In this suit! With this attaché case! And this roller bag! And these headphones!

Then there was Brandon Spikes. Before the Patriots left Massachusetts on Sunday for Indianapolis and the Super Bowl, they stopped by Gillette Stadium, where a reported 15,000 people came to send them off. Spikes wore Necco pink in three pieces.

The jacket was the sort of long, multibutton situation that a lot of large athletes get themselves into (Spikes is a 6-foot-2, 250-pound linebacker). There was striping and a matching vest. The shirt was a deeper shade of pink, the patterned tie deeper still. Exhausted perhaps by all the effort expended, the pocket handkerchief drooped. The crotch on the pants drooped, too. But the extra fabric in the legs gave Spikes a look of supreme comfort. He wore sunglasses and swept back his dreadlocks.

These sorts of clothes happen — at junior proms and the funerals of certain Care Bears. What pushed Spikes over the edge and into Los Angeles was a seemingly harmless accessory. He carried a green camouflage backpack. Spikes was able to explain the suit. He wore it when he played for the University of Florida, and the team won the BCS championship in 2007. Had he just carried a satchel or a briefcase, the finished result would have said: I’m working. Had he carried a gym bag, the result would have said: I’m working out. But that backpack with that suit said: I’m working it. What he had on was so … intentional. You might recall that, at Florida, Spikes was suspended for gouging the eyes of a Georgia player. You might have seen Spikes gamboling around Foxboro or deplaning in Indiana and thought his suit wanted to gouge your eyes, too.

Conveniently, what you have in the teams’ different ideas of what to wear is a tale of defense, from New York, versus offense, from New England. Who can say what, athletically, it portends that the Giants appeared to spring from the same Men’s Wearhouse photo shoot and the Patriots got dressed to alarm you?

The Giants seemed like a team that honestly wanted to just get on the damn plane, get off, and then get to work. The Patriots were dressed for about nine different parties on nine different boats. It’s obvious the New England style vultures have descended upon Wes Welker. He looked like he was ready to party with the whale in the Vineyard Vines logo. He was dressed for leisure: red pants, blue jacket, white shirt, no tie, brown loafers. But it was incongruous with his swashbuckler mustache. These were Pats colors, and one could surmise that Welker was taking one for the team.

Welker was wearing what Chad Ochocinco might have worn. But since Ochocinco has begun playing in New England, the only thing more disappointing than his numbers has been his failure to exert sartorial influence. Not even over himself. On Sunday, it was a shale-gray suit under a black overcoat. When Chad Ochocino is less flamboyant than Wes Welker and Brandon Spikes, something’s wrong.

The Giants landed in Indianapolis with a modicum of digestible style. Some wisenheimers will scan all the gray and black and the dark browns and blues that poured out of the plane and say, “Hey, Eli, where’s your pink suit?” But those people are auditioning for a Coors Light commercial. The Giants had restraint. They dressed defensively, like a team whose statement was, “Pink and camo? Seriously?” Should someone have shown Brandon Jacobs, who wore a good black suit and shirt and a gray tie, how to manage his outer coat? Probably. But I like that he wasn’t striving for much. (Justin Tuck committed the only true deviation. He wore khaki and looked very cold.)

Most of the Giants’ neckties stopped well above the waist, because too long makes you look severely incompetent, but too short looks like something happened — like a mistake. In this case, the ties are short because, for instance, heaven forbid someone miss that Ahmad Bradshaw’s belt is Louis Vuitton. Still, Bradshaw wore a nice dark suit, glasses with a metal frame, and that belt, which really said, “I made it. Look at my buckle!” (Of course, Bradshaw was also photographed holding some kind of Tupperware container with chopped food, which is a brilliant, poignant eye-roll deterrent.)

With the Giants, Louis Vuitton was everywhere. Victor Cruz had a good slate suit and an LV hat and a black-and-gray-checked backpack. He looked like he was late to sorting pretrial paperwork at the law firm of Igloo and Igloo. Jacobs had a carry-on that reminds you that the signature Vuitton pattern might be the new pink, insofar as it takes a very moneyed but very confident man to tote it. Otherwise, it belongs to one gender and it’s not his. On the one hand, all that luxury branding was tacky. On the other, it feels right for an event where 30 seconds of advertising time can cost a lot more than most foreclosed homes.

Most of the arrival commentary was disproportionately but not unpredictably spent on the quarterbacks. Well, there was the rehab boot Rob Gronkowski wore for his ankle. But otherwise it was: Oh, isn’t Eli always sharp? (He was on Sunday.) And: Man, Tom Brady knows how to wear a suit! (It’s true, although the collar of his Tom Ford gingham shirt seemed to swell by the hour.) This just means no one appreciated Osi Umenyiora, who was one of Sunday’s highlights. He was seen in a gray vest with metallic buttons that caught the light, matching pants, and no jacket beyond the one he carried. He wore an ornately patterned tie and a white checked shirt whose sleeves were pushed up. The jacketlessness was a superbly tough touch. If he suffered in the cold, it was worth it. Also: He wore black headphones, making him one of the few players who didn’t turn his Super Bowl trip into a commercial for Beats by Dre.

The other highlight was Aaron Hernandez, whose ebony suit had a white pocket square. It was plain but expertly tailored, buttoned for the wind, and matched with a relatively thin tie and a gray knit hat that told everybody both that he was having fun and was probably cold. The hat was a grace note that didn’t obviously require a closing-credits thank-you to a stylist. His was also one of the few suits that managed to exude relief from football while enjoying the break. Hernandez looked like an office professional, but in an easy, confident way. He was going to the Super Bowl. He didn’t need to be seen from outer space.