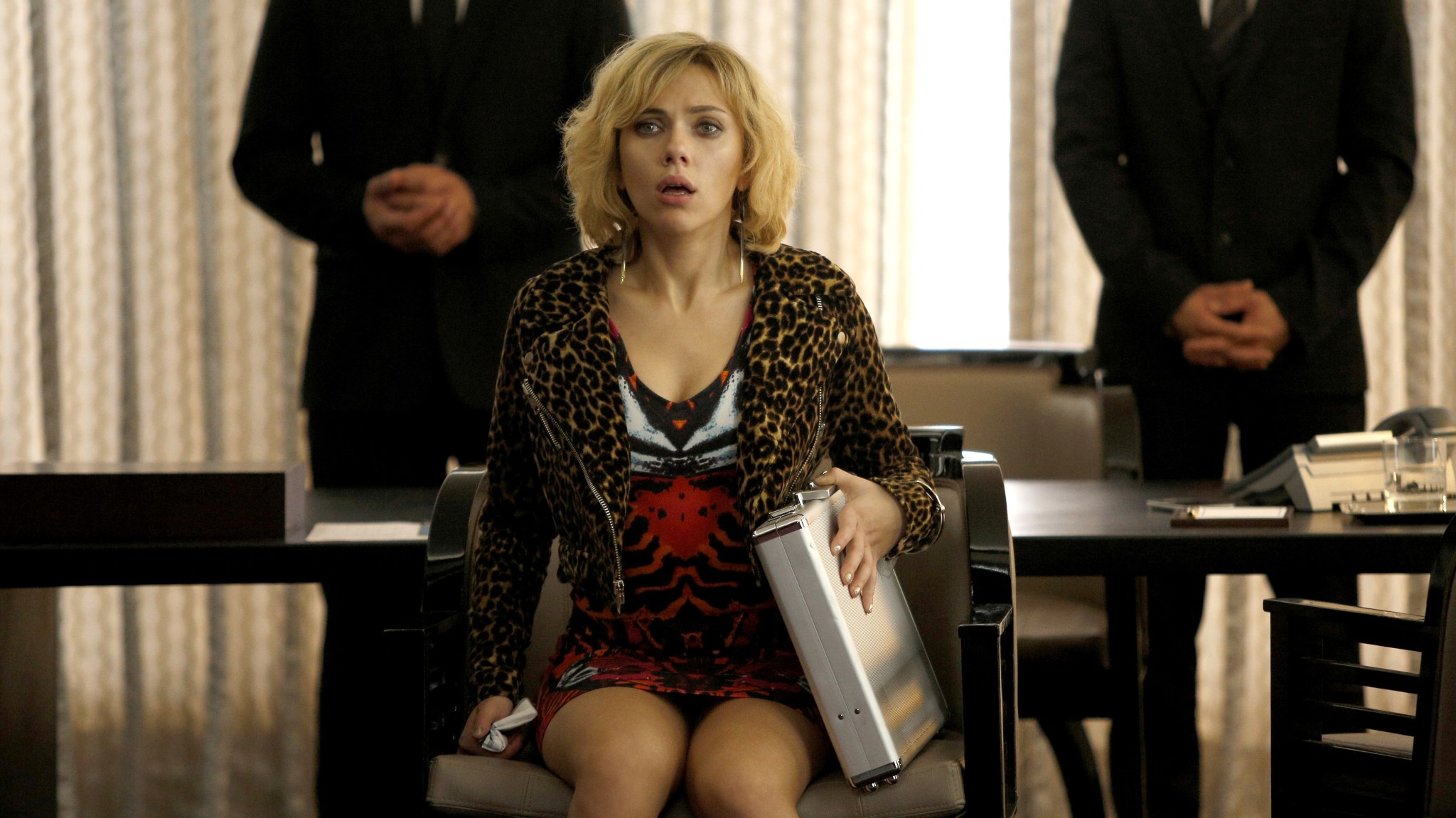 Lovers of Scarlett Johansson, savor the opening minutes of Lucy. She’s sucking on a straw outside a bank in Taipei. Her haircut is short but big and curly and entrancingly blonde. The mischief in her eyes matches the tinge of trouble in her low, rich voice. The jungle cat–print jacket seals the deal. She looks like everybody Madonna has ever played in a movie — but at the same time. The bozo boyfriend she’s talking to really wants her to help him out, but she’s like, “I totally have to study,” and he’s like, “Come on, babe. Help me out and take this briefcase in there.” They’re kind of playing. They’re kind of not. Suddenly, he gets weird on her and cuffs her to the case, causing Lucy to flash a look of terrible shock.

Yada yada yada: Lucy’s a skittish drug mule for Korean gangsters. When the drug leaks into her system, she goes from using 10 percent of her brain, like the rest of us, to using all of it. Some chick studying abroad becomes the Future of Civilization. Or whatever it is Luc Besson is going for with this. Lucy’s rising intelligence is inversely proportional to the movie’s. But its stupidity has the kick you expect from the man who’s been writing and producing Taken movies. For once, Morgan Freeman is not the voice of omniscience. He’s a baffled scientist whose tens of thousands of pages of research Lucy read in an instant. She’s on her way to his Paris lab, and she’s dragging with her a bewildered cop (Amr Waked), a few of his men, and all of those gangsters led by Choi Min-sik. Besson is having some queasy fun. Isn’t this just a white lady running from a bunch of crazy Asians? Once, the movie has an uncomprehending Lucy shoot a Taiwanese guy for comedy.

Much of the reason the opening scenes are so good has to do with a loose, breezy Johansson’s dominating performance. Hearing that voice come from that face, seeing her playing a person, revved me up. I didn’t know whether to dab my eyes or fasten my seat belt: You mean she’s not going to be software or a man-killing seductress-alien? Thank you, Luc Besson. But it doesn’t take long for the light in Johansson’s eyes to dim and an action film to take her over. The more brilliant — and telepathic, telekinetic, and daring, like a 1970s stunt driver — she becomes, the less human she is.

There’s no malice in Besson’s use of Johansson. He can be a zigzagging, amusing feminist director, building spectacles around everyone from Anne Parillaud and Milla Jovovich (each of whom were at one point his wife) to Michelle Yeoh as the shut-away Burmese politician Aung San Suu Kyi to Michelle Pfeiffer as the head of nuclear family of assassins. He likes his idea of female power, which is like male power but in sleeveless tops. One letter separates Lucy’s name from Besson’s. You just have to ignore the double meaning of that letter “y.”

What you feel from Besson to Johansson is an absurd love. She fascinates him just as deeply as she does Spike Jonze in Her and Jonathan Glazer in Under the Skin. Taken together, the films constitute some kind of investigation of her essence and sexuality, of the fantasy her stardom presents. But she seems very much a partner in that exploration, not a victim of it. All the probing is making her stronger as a performer. It’s not mere carnality she projects in these movies, it’s variations on wonder: What can I do as an alien life-form pretending to be a beautiful woman? What can I do with a role that denies me physical form?

Johansson does more than experiment in these movies. She’s terrific in all three. It’s just curious to me that filmmakers as different as Besson, Glazer, and Jonze are interested in her as something other than human, something beyond it. And in The Island, she was a clone for Michael Bay! At the risk of indelicacy, you wonder what female directors would see in Johansson at this point. It’s not as if she hasn’t been good as a civilian or what passes for one. I liked her as Black Widow for Marvel, and thought her zookeeper in Cameron Crowe’s last movie, We Bought a Zoo, showed her talent starting to crest. In Joseph Gordon-Levitt’s Don Jon, Johansson seemed to be working at a sharp, new angle. But what might she and Sofia Coppola achieve in a rematch? Where would the stress fall on her range?

Lucy doesn’t give Johansson much to do as an actor. Touchingly, Besson seems to think that in order to give her all the power in the world he has to take away her skill. When the drug starts to do funny things to Lucy on an airplane, Besson even risks taking away her beauty, not to punish her but to punish us. That’s temporary. For most of the film’s back half, Johansson can be seen waving her arms like wands and sitting perfectly still while wearing a little black dress. Holding on to that body feels like an act of willful sentimentality.

What’s wrong with this movie? It’s a cut above this spring’s Transcendence, in which the Internet is infected with the Johnny Depp virus. That movie believed it was saying something, but it was too wimpy to take its point about overconnectivity to some exciting or disturbing extreme. It had Freeman in the same role but no vision. Besson has too many visions. This movie worries that humanity is wasting its potential, which is a bizarre fear for a movie that has this many nonsensical shootouts. But that’s what on Besson’s mind: the Big Bang and bang-bang.

It’s simultaneously fun and extremely boring, up to something provocative and yet the same old, same old. Still, some of that same old is fun. How many directors have left one of the five-star hotels on the Rue de Rivoli and thought what’s been missing for all of these centuries is a car chase through the famous arcades? Well, Besson’s gone and done it. Subtlety is his kryptonite. Here and there he spikes the action with shots from the animal kingdom: mice stepping onto a cheesed trap, a cheetah trotting off with an antelope dangling between its fangs. In one of the opening shots, prehistoric man is crouched by a lake, waiting perhaps for a plunk from the bone in 2001: A Space Odyssey.

The movie rumbles through time and space, sending dinosaurs, pyramids, and nebulae toward Johansson and us. There’s both amazement in these shots and braggadocio. It’s as if Besson sat through a half-hour of Terrence Malick’s The Tree of Life, hit fast-forward, and thought, I can do that but with drugs and guns and car chases. Malick gave us gaseous galactic emissions. Besson is farting.

[Stops typing. Backs away from computer. Braces for strike of lightning. Nothing? Resumes.]

He might never allow himself to make it. He might not even believe he can. (He might think After the Sunset and The Family Man already are great.) But you look at the battle scenes in Hercules, and after wondering why you’re watching yet another of these sequences in which hundreds of real and digitized fighters run toward each other, you notice how navigable they are. Most of the cutting keeps the action matched so that when a character tackles an extra, you can follow the approach, impact, and thud. The clubbing and stabbing and leaping: It’s all senseless, yes, but it’s assembled in a way that makes sense, too. Working with the cinematographer Dante Spinotti for the ninth time, Ratner even shoots the scenes in daylight, which adds a touch of honesty to the action.

Continuity and clarity are absurd things to single out for praise. In the homes of most directors, even so-so ones, that’s called filmmaking. But even in something as run-of-the-mill as this, the crispness of some of the staging is impressive. It’s a crispness that eludes men like Christopher Nolan and Peter Jackson. Even so, until the campy action-movie scenes in the last 25 minutes, I was bored — and honestly, no matter how well put together one of those melees is, if you’ve seen one, you’re all set.

This Hercules (Dwayne Johnson) is not a persecuted demigod (most of his 12 labors have been completed) but a woebegone warrior “from the streets of Athens.” Rumor has it that his wife and children were slain by his own hand. Obviously, the rumors will be dispelled. In the meantime, he’s moonlighting with a band of five acolytes (including Ian McShane and Rufus Sewell), roving Thrace while doing mercenary work for sacks of gold. It sounds like the gist of a bad 1980s show on today’s Starz. (Coming this winter: The Slay Team!) In this episode, a woman named Ergenia (Rebecca Ferguson) comes to Hercules on behalf of her father, Lord Cotys (John Hurt). He needs his agrarian subjects trained for war against Thrace. Hercules and the acolytes agree to help, and together they create a farmy. But the plot twists, and Hercules finds himself in chains, at which point the movie’s energy picks up along with its sense of abandon.

Presumably, the credited screenwriters (Ryan J. Condal and Evan Spiliotopoulos) will hear that the last quarter is livelier than the first three and say they were building toward that last act. What they’ve built is basically as strong as a coat of paint. And yet, they should be a little proud of this greasy script. They’ve conflated Greek history and mythology — or adapted Steve Moore and Admira Wijaya’s graphic novel that did. The writing has amusing lines for McShane and Sewell and a bitchy part for Joseph Fiennes, as the King of Athens, to tip into Cleopatra. That last scene is unsurprising, but it’s also fun. There just isn’t enough of that.

Really, Hercules wastes Johnson. He’s got the right body for the role (redonkulous) but deploys the wrong temperament: He’s too passive, too agreeable. You don’t want to hear Johnson with lines like “never retreat” and “advaaaaaaaaaance,” not when Hurt, Sewell, McShane, Fiennes, and Peter Mullan, as a shady general, are using toothpicks to pluck scenery from between their teeth. Johnson wears a brunette wig and makeup that doesn’t always completely hide his body art. (What was I saying about continuity?) He’s been given one anachronistic line of foul language, and, whether or not it was in the graphic novel, it seems included because the U.K. actors had all the fun stuff to say.

This feels like something Johnson might have done 12 years ago, when he was still wrestling full-time as the Rock but wanted to bank on his movie-star charisma. That smile of his is great in the ring. It’s right up there with Julia Roberts’s. In films, though, it’s often more like a grimace. The point of leaving the Rock behind was to keep Johnson out of stuff like this and to take more risks, like the juiced-up idiot crook he played in Pain & Gain. We know he can shove a towering statue onto a fleet of men. For years, that’s basically what he did for Vince McMahon. Of course, he also needs a hit, and Hercules should do it. But you leave underwhelmed. He, and Ratner, should be doing more than pushing over fake marble. They should be pushing themselves.