The Curious Case of the Colts

And Then We Came to the End 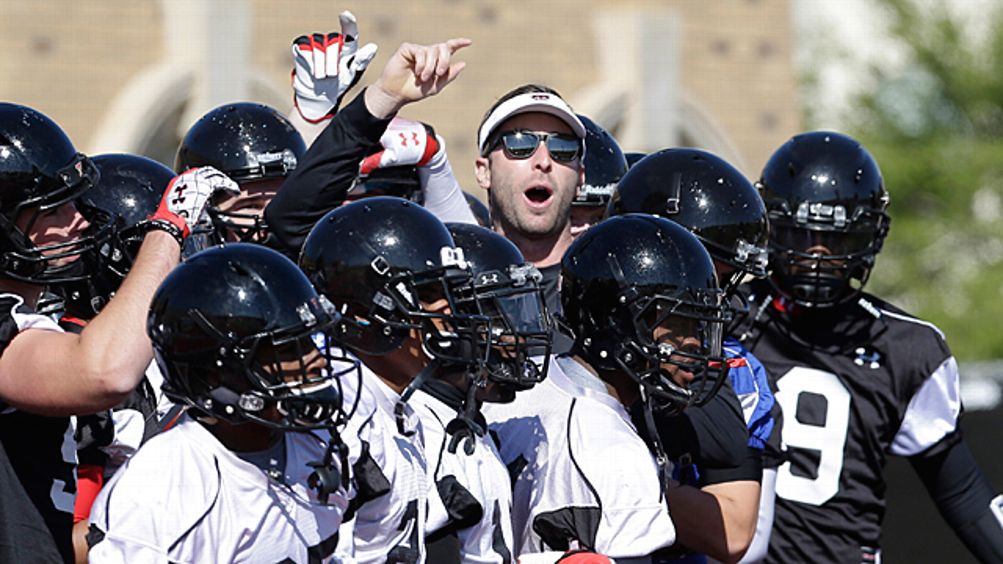 Underneath Kliff Kingsbury’s chain mail of Under Armour, Oakleys, three-day stubble, and laconic, “have a Corona Extra on me” tenor, beats the heart of … well, hell, the heart of an artist. The new Texas Tech football coach is the subject of Jonathan Hock’s latest Grantland Channel film, and it should come as no surprise that the opening images are of Kingsbury drawing little marks and squiggles across a clear board. Yes, the former Red Raiders quarterback and Texas A&M offensive coordinator is teaching a system, but there’s more to it than that: He’s teaching his players not to think.

This is ultimately a portrait of a different, more creative, more intuitive way to play football. Employing unorthodox practice techniques and a blinding pace, Kingsbury, who at 33 is the youngest head coach in the BCS, is trying to get his team to play on a very pure and instinctual level. “We do not have a playbook,” says Kingsbury in the film. “We draw it for ’em and they write it down and we’ve found they learn it better.” If it seems like Kingsbury speaks with a Zen-like calm when he delivers that almost avant-garde statement, that’s kind of the point. This guy isn’t just coaching football players, he’s shaping minds.

You can hear it in the phrases he chooses to use when discussing his coaching style: “we allow,” “we want.” According to Hock, this isn’t an accident. “Those phrases are so gentle, in terms of football,” Hock said. “You don’t hear those things around a football team. He’s instilling confidence, not tethering them to his voice. You don’t want them thinking of your voice when they’re being chased by a 270-pound linebacker.”

Under Kingsbury, instruction happens in the film room; practice is purely about repetition. “They don’t stop practice to teach,” says Hock. “When we say an athlete is in the zone, we mean they’re free of thought. That’s what he’s trying to achieve out there. These neural patterns become so ingrained, they’re second nature. It’s so sophisticated.”

This talk of neuroscience and learning philosophies might seem out of place on a football field, but Hock says Kingsbury’s recent history as a player gives him more cachet. “This guy was playing quarterback 10 years ago, and he still has that swagger,” he said. “He’s not an ex-linebacker; he’s not gonna hurt everybody in the room. He’s gonna be cooler than everybody in the room.”

Hock wouldn’t be surprised if Kingsbury spawns a generation of football coaches employing not only a variant of the Air Raid offense he uses, but his man management style. “Once there’s empirical evidence to support his way of thinking, there’s going to be a lot more guys like him … I don’t know if they’ll all look like Ryan Gosling, but there will be more of them.” True. I guess some things just can’t be taught.