The Many Faces of James Harden 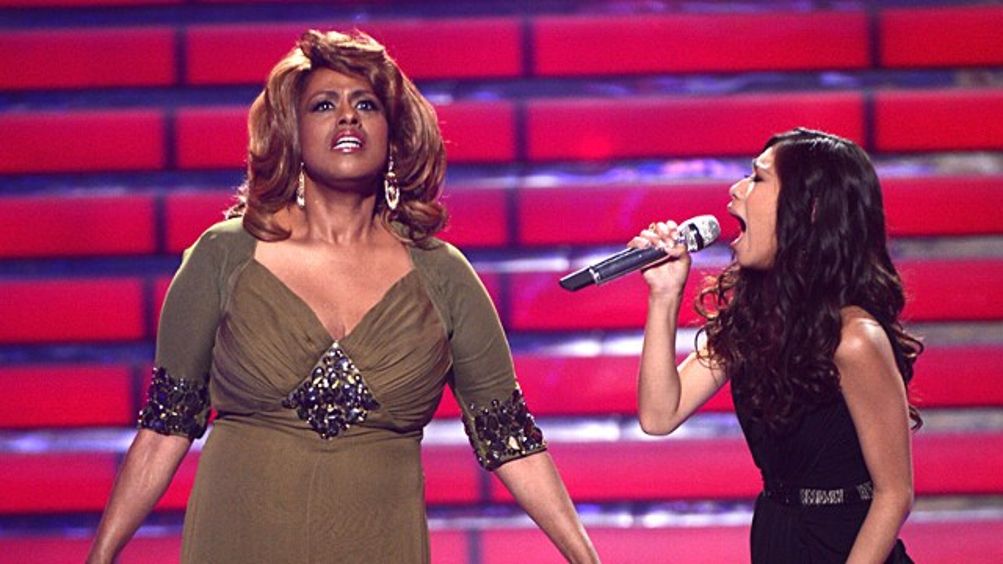 All you aspiring Divas take note: Only two songs matter anymore. We are in the Tumblr/karaoke age of music, and because the Internet is still just a very digressive amalgam of America’s Funniest Home Videos, Star Search, and a bulletin board, you can gain international recognition by blowing out a song that’s already been blown out before. This is especially true if you are under the age of 10 and if you do your hair in a way that allows bloggers to post screen captures with the caption “#swag.”

So. If you are 10 or 12, or, better yet, 8, and want to be the next to do the Honorary Charice Pempengco Tour of all the morning TV talk shows, all you have to do is murder “And I Am Telling You I’m Not Going” or Whitney’s version of “I Will Always Love You.”

What follows is the Diva Committee’s road map to both songs.

And I Am Telling You, I’m Not Going

The singer in this video is Jennifer Holliday, who, at the age of 21 in 1981, starred as Effie in the Broadway production of Dreamgirls. Holliday got halfway to an EGOT, winning the Tony for Best Leading Actress in a Musical, and a Grammy mostly based on her performance of “And I Am Telling You.” All that stomping, stank, and pointing inspired three generations of hopefuls to take the stage on Amateur Night with hopes of tearing down the roof of the Apollo Theater. By the early ’90s, “And I Am Telling You” became Hamlet’s monologue for all of female R&B — only the best would give it a go, while the rest left it the fuck alone.

For a reference point, here’s Whitney’s go at “And I Am Telling You.”

At 2:22, after some bumbling about and a flurry of Whitney’s trademarked, well-enunciated consonants, she gets to the most important part of the song: “And you-uh, and you-uh, and yoooooooou … You’re gonna love meeeeeeeee.” And just like Jennifer Holliday and thousands of Apollo hopefuls before her, Whitney points at every section of the audience to indicate that no single person is going to be exempt from loving her.

No performance of “And I Am Telling You” is complete without this pointing move. Here’s how it should be done: Jennifer Holliday on the stage of the Apollo windmilling her arms around like Tommy Hearns in the first round of his 1985 middleweight championship fight against “Marvelous” Marvin Hagler. (Fast-forward to 6:17.)

Once you’ve got the point down, move on to the “NO-NO-NO-NO-NO … I’m not waking up tomorrow mornin’ — HEH — and finding that there’s no-bah-dee theeeeeeere … ” The key here is to blast out the “no”s in a way that shows the audience you’re not just going to belt out the big, long notes. In recent years, the best NO-NO-NO-NO-NO-NO came from a young lady named Bianca Ryan on America’s Got Talent.

1:20: Do you hear the separation between the notes? Did you see Brandy stand up like the Holy Spirit had hit her? Did you watch David Hasselhoff squirm around uncomfortably in his chair as goose bumps ran over his body? After killing NO-NO-NO-NO-NO-NO, the rest of the song became a formality — Ryan didn’t even point all that hard because she knew that the work had already been done.

None of this is particularly revelatory. Everyone who has ever taken on “And I Am Telling You” knows the keys to success. And yet, despite the efforts of all those chubby Apollo hopefuls smelling of hair product and cocoa butter, Holliday presided over the biggest song in R&B for 25 years. Mariah has never tried the song. Whitney tried it once and gave up. Even Aretha left it the hell alone. Then, in 2006, American Idol seventh-place finisher Jennifer Hudson starred in the film version of Dreamgirls and snatched the song away.

Holliday’s supporters will point out that Hudson had the luxury of a recording studio and multiple takes to perfect her rendition of the song. I’m of the opinion that the distance imposed by celluloid and a recording studio actually made it harder for Hudson to connect with the audience, which made her accomplishment all the more impressive. You don’t have to hit all the notes when you sing “And I Am Telling You.” You don’t even have to get all the words right. Really, all that matters is that the audience believes that you have the power to blast out all the big notes at the end and that you’re laying the stank on so thick that — in the words of Grantland’s Sportstorialist Wesley Morris — the room smells different when you’re done singing. Jennifer Hudson changed the smell in every movie theater in America. Nobody had ever done that before. The reverberations are still being felt today. When those same young girls walk onto the stage of the Apollo now, they’re singing Jennifer Hudson’s song.

Last Thursday night on the Idol finale, the past, present, and the future of Divadom came crashing together in this batty, wonderful performance. On the same stage that made Jennifer Hudson a star, Jennifer Holliday did her best to take back her crown.

With everything on the line, Holliday chose a tactic that almost never works — she went weird. How do you erase the memory of Hudson in Dreamgirls? How do you imprint yourself back into the minds of the older generation while also introducing yourself to the tweens? Well, apparently, you make a whole bunch of crazy faces, run back all your old drunken hand motions, and blow Jessica Sanchez off the stage. I loved every second of Holliday’s performance — she livened up a boring night and brought down the big notes while reminding America what can happen when your doctor botches your face-lift. More important, she took Divadom back to its competitive roots by planting her feet on the stage and making sure that by the time the song ended, nobody would ever be able to think of Jessica Sanchez without also thinking of Jennifer Holliday.

Holliday stole this move from Aretha Franklin. Whenever Aretha would bring out poor little Carole King to thank her for writing “You Make Me Feel Like a Natural Woman,” she’d kind of push Carole to the corner of the stage and remind everyone of all the reasons why the Diva Committee doesn’t have a “songwriters” category. Holliday might have physically shared the stage with Sanchez on Sanchez’s big night, but she was really calling out Jennifer Hudson and asserting the past back into the present. Holliday might not have won the battle, but wherever Hudson watched from that night, she knew she was in a fight.

After the Idol finale, the Diva Committee met and discussed the possibility of raising the value of the Aging Into a Drag Queen/Wearing Insane Hats category. This category, which has helped boost the values of Cher, Celine Dion, and Aretha, is currently worth 30 points. Holliday — with her wig that looked like it was made of Ewok, her smooth, Plasticine skin, and all that drama going on in the facial area — put on one of the Drag Queeniest, Insane Wiggiest Diva performances of all time.

For that, we rewarded her five bonus points.

I Will Always Love You

If “And I Am Telling You” is the blood-and-guts trial for Divas, whereby the champion staggers off the stage like Magnus Ver Magnusson, then “I Will Always Love You” is the finesse event. You don’t need a particularly huge voice to nail “I Will Always Love You,” and there’s a way to sing it without leaving sweat stains in your spangled pantsuit, but if you’re going to take on THE BIG SONG, you better make sure you don’t miss a single note.

Perhaps the most fitting tribute to Whitney Houston in this season of Whitney tributes is that nobody has really tried to do anything but a credible karaoke version of THE BIG SONG. Even Jennifer Hudson — the only Diva in the game who could actually take the song and turn it into something else — just did a quick run-through of Whitney’s phrasing, enunciation, and runs. It’s become THE aspirational song for all the young Jessica Sanchezes in the world, and nailing even 80 percent of it can make you an Internet superstar.

Let’s consider some of the more notable renditions in recent years.

The Diva Performance of 2012. Timely and respectful. Hudson even put in her own “shaking her head to make her voice trail off before bringing it back” move. A+

Is this the greatest karaoke act of the YouTube era? Lin Yu Chun, also known as “That Fat Taiwanese Kid in the Bow Tie,” not only nailed all the big notes, he flawlessly parroted Whitey’s intonations. There might have been more meaningful non-Whitney performances of “And I Will Always Love You,” but has one ever been so accurate?

Blergh. This is what happens when you’re 16 and really great at karaoke but don’t really understand that there are certain songs that are better left alone. Again, what is the point of this performance? What does it elicit? At best, aren’t you just thinking, “Wow, that tiny girl can really belt out a somewhat credible Whitney”?

In the original Diva Rankings, we included Jordin Sparks as the control. We couldn’t think of a more boring and terribly competent comparison point for the pyrotechnics of the true Divas. For the sports bros reading this, just think of Jordin Sparks as the Replacement Level Player. Her rendition of “I Will Always Love You” at this year’s Billboard Awards (an event we didn’t even know existed) proves our point beautifully. Sparks sang competently but blandly, and although she made Bobbi Kristina cry, who really listened to that performance without thinking, Why isn’t this Jennifer Hudson?

Beyoncé, who, above all things, is smart and safe about her musical choices, recently took on THE BIG SONG at her show at the Revel nightclub in Atlantic City. Like Hudson at the Grammys, Bey chose to only sing the first few bars before transitioning straight into Halo. Was she singing to Whitney? Was Bey saying that she could see Whitney’s halo? This audience member in the following video ran through these questions and more.

I don’t know if it’s all these singing contest shows or if it’s the Internet’s love of nostalgia or if it’s Glee or if it’s still all Napster’s fault, but what does it say about R&B/soul that the most notable performances of the year are all tributes to old/dead Diva greats? Even R. Kelly, the man who has single-handedly done more to push the form into new places, seems lost in the past. While it seems premature to predict the death of R&B, the formula for Diva greatness has never seemed more derivative. The committee applauds all children who want to become the next Whitney or Jennifer Holliday — lord knows, we need more of them — but we’ve found ourselves in this weird, closed loop where the first step toward Divadom doubles as its endgame. Even if Jessica Sanchez or Charice Pempengco or any of the other pubescent singing prodigies puts out a meaningful song in a few years, will anyone notice? Or will they be too busy projecting greatness onto the next great Apollo hopeful?