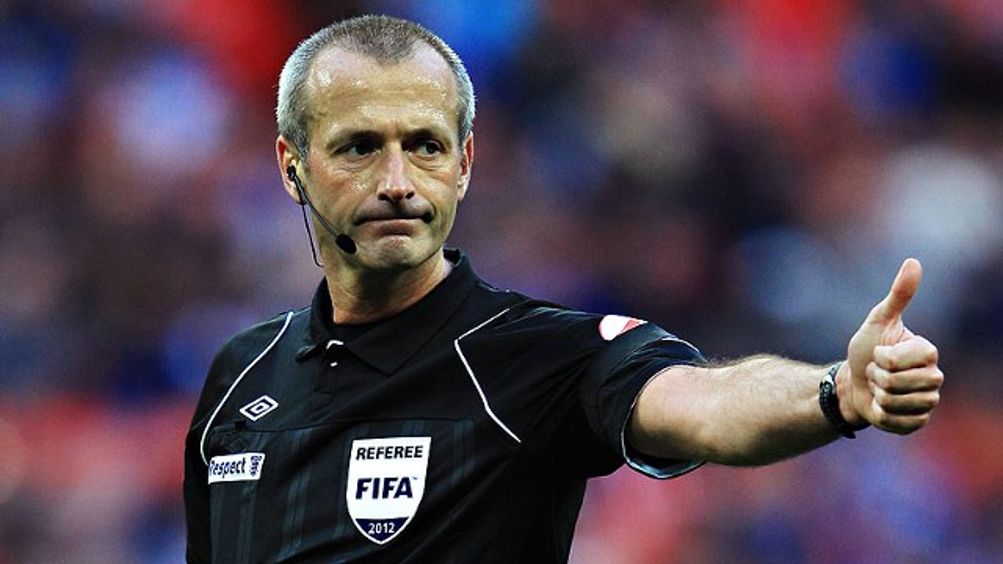 Martin Atkinson likes to sing “Commme onnnnn youuuuu Spurrrrrrrs” in the shower. Lee Mason has a shrine to Sir Alex Ferguson in his house, and every day he lays a nice bottle of Chianti, a Racing Form, and a hair dryer at its altar as an offering. Howard Webb has been seen driving around Rotherham, listening to Oasis’s B-side collection, with the treble turned up too high, in a sky-blue Jaguar with the license plate, “IBRK4CTY.” There’s apparently a photo somewhere on the Internet of Chris Foy wearing this King Kenny crown. Sam Allardyce once sent Andre Marriner an industrial-sized box of Aero caramel bars with a lovely handwritten note that said, “UUGGUHGUUGH,” and Marriner accepted it proudly.

None of these things is true.1 But it doesn’t matter. When it comes to Premier League referees, perception is reality.

This weekend, with United in the driver’s seat (despite losing to Wigan on April 11), City rolled down the window and let the wind blow back their hair, beating Norwich, 6-1, and showing off some of their early-season flair. Aston Villa continued to get sucked into a relegation battle, joining Bolton, Queens Park Rangers, Wigan, Blackburn, and Wolves. And on top of all that, the FA Cup semifinals were played at Wembley over Saturday and Sunday, with Liverpool earning their second cup final of the season and Chelsea emphatically beating Spurs, making it to their third FA Cup final in four years.

Despite all that action, this weekend was more about decisions than results. Two huge incidents loomed large. During United’s 4-0 whipping of Villa, Ashley Young, for the second time in a week, went down with a little too much flair, tricking referee Mark Halsey into blowing his whistle and awarding United a penalty in the seventh minute.

Also on Sunday, during Chelsea and Tottenham’s FA Cup semi, Martin Atkinson made an awful decision (without much help from his linesman) to award Chelsea a goal for a ball that had never crossed the line (and if it had, should have been waved off because of John Terry leaping into the goal mouth like there was a rugby scrum or a fire sale on awesome button-down shirts).

There were other incidents drawing attention as well, such as Carlos Tevez wrongly being called for diving against Norwich. As Sunday afternoon turned into Sunday evening — and with Ferguson, himself, making the rare public admonishment of one of his own players, calling Young’s tumble “dramatic” — the BBC’s 606 phone-in show, blogs, newspapers, and Match of the Day 2 were all about one thing: the state of refereeing in the English top flight.

In general, the debate surrounding particular referees, or particular blown calls, is pretty pointless. It’s kind of like being mad at parking meter attendants. You’re only talking about refereeing when it pisses you off. When it comes to managers, a lot of their recrimination of referees seems like hot air. They endlessly dress down, second-guess, and undermine officials because their job security, for the most part, is so tenuous. But even when considering their motivations, it’s agonizing to watch them harp on about calls. I’ve never seen an umpire or ref change his mind because a player or manager or coach convinced him he had cataracts. I’ve never seen a ref say, “You know what, Tony Pulis? That’s a really well-reasoned, calm, and measured piece of constructive criticism. That was especially sharp when you called my father a ‘mong.’ I stand corrected. Free kick to the Potters.”

You never hear anything like that because English Premier League referees never speak. Their role is a silent order, with little or no communication with the press. They are the constant whipping boys of managers, taking the blame instead of poor player performances or bungled tactics. When losing managers speak to the press following a loss, it seems like the only thing they are interested in doing is shifting responsibility away from themselves. If Stoke or Queens Park Rangers lose, it’s not because they tried to kick the opposing players into submission or lacked any attacking creativity or interest in scoring. It’s because the referee blew it. There’s a conspiracy and it goes right to the top. And in the face of this postgame abuse from managers at the top and bottom of the table, referees move in silence, almost monklike, absorbing criticism without saying a word.

I will be completely honest and say that the only time refereeing decisions bother me, even when they go against a team I happen to be cheering for, is when the situation obviously demands a greater level of accountability or precision. It sucks, but it’s true. If West Brom are playing Norwich and Andre Marriner gets distracted by a guy wearing a jester’s hat in the crowd and blows a call, I am not going to write a pamphlet about it. And if Roy Hodgson or Paul Lambert complains about it, it falls on deaf ears. Same goes for Wigan manager Roberto Martinez, whose team has been particularly screwed on a couple of recent occasions. I feel for him, and I know it’s unjust, but life is too short to start a #FreeWigan movement or a #BuyHowardWebbBifocals campaign. I find it to be more mentally healthy to just think of refereeing decisions as factors impacting the game, like the weather. And I’m about as interested in hearing someone bemoan a bad call as I am in hearing someone complain about the weather.

But when something gets screwed up in a big match like the FA Cup semifinal, it just looks sloppy — like football, as a sport, doesn’t care enough about its product to get it right. Sure, Juan Mata’s non-goal goal was confusing, and the pileup on the goal line didn’t help.

But the idea that football can’t afford to get things right, or that the traditions of football2 won’t allow for something as progressive as instant replay or goal-line technology, is asinine and suggests that the sport doesn’t have its priorities in order — and it doesn’t. This is, after all, a game in which players get yellow cards for taking off their shirts during a goal celebration and Porto gets fined less for its fans shouting racial slurs at Manchester City players than Manchester City does for showing up late for the second half of a game against Sporting Lisbon.

When Gareth Bale scored to put Spurs on the board and cut Chelsea’s lead to 2-1, Atkinson’s gaffe was all the more outrageous. Yes, Chelsea wound up wiping the floor with Spurs in the end, but you never know how things would have shaken out differently had Mata’s shot not been ruled a goal. Tottenham manager Harry Redknapp seemed to handle things surprisingly well, saying after the game, “He must have guessed … He [Atkinson] can’t have been sure. He’s just made a mistake, unfortunately. A big mistake. I spoke to him. He says he feels worse than I do. I said: ‘I don’t think so.'” For once I agree with Harry.

Some more notes about the two FA Cup semifinal matches:

• This felt like something of a swan song for Spurs. In all likelihood, the next time Redknapp manages a team at Wembley it will be the England national team. But even with Harry’s exit looking imminent, we still saw what was (aside from the back line) a first-choice Spurs team get shredded by a very old-school-looking Chelsea (if 2008 can be old-school). They got the band back together for this Wembley gig, and they were completely out of tune. Redknapp ran out the two-man central midfield of Luka Modric and Scott Parker, had his quick wingers in Aaron Lennon and Gareth Bale, and even had his striker-roamer pair up front with Emmanuel Adebayor and Rafael Van der Vaart. But Chelsea just steamrolled Spurs, especially in the middle of the park, where John Obi Mikel, Ramires, and Frank Lampard outnumbered and outmuscled Tottenham. For stretches of the season, especially in early December, no team in England was playing better football than Spurs. But on Sunday there was a “last week of school” air to the team. Redknapp will probably be off this summer, and Modric will likely follow him out the door to Chelsea, City, or United.3 After the semifinal, Parker said, “We’ve had a fantastic ride this year and we’ve dipped, that’s obvious. Even our own manager is probably doubting us a little bit at the moment. Others [are], too, like our own fans.”

• Another team likely to face major changes this summer is Liverpool. While the Reds never reached the moments of sublime chemistry on the field that Spurs have, they may very well end up with more to show for their inconsistent season than the North London club. Yet despite being in their second domestic cup final of the season, this Frankenstein Liverpool team will probably be disassembled and reconfigured this summer. Too many players are playing out of position (Jordan Henderson is a central mid, not a right wing), their shape often lacks balance (you can’t just play Stewart Downing wide left, and not have a right-flank threat), and the attacking trident of Steven Gerrard, Luis Suarez, and Andy Carroll hasn’t been able to click (mostly resulting from injury and racial abuse-related suspension). They have a highly vaunted academy, with some nice youth players — like Raheem Sterling — waiting in the wings. But you get the feeling, with the departure of director of football Damien Comolli last week, that the Liverpool team taking the field in August will be rather different from the one we saw on Sunday.

• You had to feel legitimately bad for Sylvain Distin, who has had a career renaissance under David Moyes at Everton. That back pass gone awry was the kind he has probably made 500 times in his career. He just picked the wrong time to make it. It was heartening to hear the Toffees’ Tim Cahill speak so warmly of his teammate after such a disastrous screw-up: “He shouldn’t apologise,” said Cahill. “He has been our player of the season, he has been immense and one mistake doesn’t sum up the season or paint a proper picture.”

• Let’s really just think about the widespread application of the windbreaker tied around the waist going on here. Real talk: One of the funniest things in the whole world are social-life candid shots of football players out at night, shopping, whatever. They dress like 2003-era interior designers on E!. I love the back-to-back-to-back run of Lampard, Terry, and Cahill walking down the hallway in this interview. Do you think when Cahill arrived at Chelsea there was some kind of windbreaker-tied-around-the-waist ceremony? Was Olde English spoken? Were there any Druids on the scene? “I, [STATE YOUR NAME], DO SOLEMNLY SWEAR TO MAKE SMALL TALK WITH JAMIE REDKNAPP AT CHRISTMAS PARTIES AND CONTEST HEADERS WITH MY ELBOWS PLANTED FIRMLY IN THE BACK OF THE OPPOSING FORWARD’S SKULL, SO HELP ME GOD.”

The noise that Didier Drogba could be out at Chelsea (possibly heading to Shanghai, where he would join his former striker partner Nicolas Anelka) may be getting louder, but we will have this classic Drogba goal to remember him by.