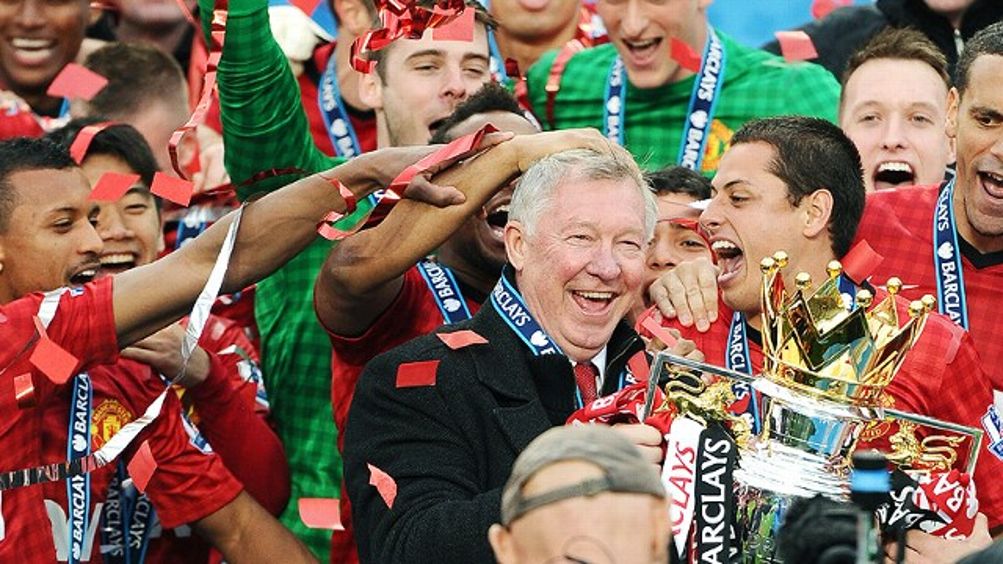 Of all the attempts to put Sir Alex Ferguson’s 27-year tenure managing Manchester United in perspective, perhaps none were as articulate as the team he selected yesterday for his final match at Old Trafford. The 11 players were sampled from the various phases of his managerial tenure. There were the bargains he had shaped into heroes, the luxury pieces he had acquired simply by making poorer clubs offers they couldn’t refuse, youngsters playing out of position, the homegrown stars who had been indoctrinated as children to live and die by United. There was the 38-year-old Paul Scholes, playing his last match at Old Trafford and thankful that Ferguson could lure all the attention away.1 And there was no Wayne Rooney — absent from the starting 11, the substitutes, even the stands. Instead, he took in the match from a box high above Old Trafford, the villainous and self-important symbol of what the sport had become.

Naturally, United defeated Swansea 2-1 thanks to a late winner — the kind of thing that has come to define justice or its very opposite, depending on your feelings about the color red.

To watch Manchester United’s triumphs over the past decades is to wonder what it is Ferguson actually does but accept that none of it would work without him. The Scotsman arrived at Old Trafford in 1986 after a wildly successful tenure managing Aberdeen. He stayed at Manchester United for 27 years, winning 13 league titles, two European Cups, and every other trophy along the way. He’s produced, tamed, and jettisoned stars at every stage of his career. There’s no real contemporary comparison for Ferguson’s tenure. There have been coaches and managers in other sports who have nabbed rings for fun — Phil Jackson is the one you hear about the most — but few have stayed in the same, intensely spotlighted job, in roughly the same office, for nearly three decades.

Where does Ferguson’s brilliance reside? I’ve often wondered what it is a coach or manager actually does, what skill set is required to be hailed a managerial genius. He’s not the greatest in-game tactician — one of the reasons Jose Mourinho boasts such a favorable record against him — and it would be a disservice to his staff to credit him alone for developing players like Ryan Giggs, David Beckham, or Cristiano Ronaldo. There have been shrewd acquisitions and embarrassing ones, and it says a lot about United’s finances that none have single-handedly made or broken the club. In fact Ferguson seems a bystander to some of the most astonishing moments of United’s recent history, that classic sequence of the last-second winner followed by the camera panning to Ferguson, his fists balled in pleasure, pogoing up and down.

In these moments, you want to believe that Ferguson made it so. There’s a spiritual dimension to all this, a willingness to suspend judgment or rational thought and convince yourself that he somehow ushered Ryan Giggs through that maze of Arsenal defenders or made John Terry miss or calculated the precise nanosecond to send Ole Gunnar Solskjaer or Javier Hernandez on as a substitute. He was a player’s manager, in the sense that he rewarded loyalty and devotion with a kind of overprotective mania. He could convince you to play out of position or reduce your goal tally for the good of the club, and in return he would defend you to the death. He would court delusion to preserve your confidence. “You’re all fucking idiots,” he famously told a group of journalists questioning the underwhelming performances of Juan Sebastian Veron, one of Ferguson’s most expensive acquisitions. He waged holy war on your behalf because this was more than a team — this was a legacy, a tradition, a union. And he would never snitch, because that’s what he learned in the tenements of Govan.

But winning a young player’s faith is different from courting his affection. Over the years, his best players seem to become more like him — never the other way around. A couple years ago, he prohibited United’s youth players from wearing colored boots as a way of discouraging too much individual flash. More recently, he’s alleged to have banned his youngest first-team players from driving sports cars.

There’s something slightly absurd about Ferguson’s stubborn and heavy-handed resistance to the lures of an ever-changing present, let alone the party-busting micromanagement it’s inspired. In recent years, there have been moments when his mystique — which creates that desire among his players to be recognized as proper, authentic, and brave in their boss’s eyes — has faltered. In 2012, United lost two of its brightest young midfield prospects, Ravel Morrison and Paul Pogba, in a span of months. Morrison, who had spent nearly half of his life with the club, was sold because of his continual run-ins with the law. The occasional stern word from Ferguson and senior squad members seemed to have little effect on the local prodigy’s behavior. Many thought that Ferguson’s willingness to give up on Morrison — hailed as United’s finest prospect in two decades — had to do with Pogba, a powerful French midfielder who had arrived at United under shady circumstances. Ferguson was grooming Pogba for the future. When Scholes was substituted during his 2011 testimonial match, Ferguson replaced him with Pogba, a torch-passing gesture of sorts. But Pogba, too, seemed unwilling to wait his turn. When his contract lapsed, he signed with Juventus. A month later, Zeki Fryers, another talented teenager said to have felt “disrespected” by Ferguson, left as well.

For much of his career, Ferguson could get by on a kind of behind-the-scenes fear. Veterans like Scholes and Giggs still speak of the moments in their young careers when they realized they never wanted to be on Ferguson’s bad side ever again, and those who have lived through it trade tales of Ferguson’s ferocious “hairdryer” treatment. But fear rarely suffices in the modern game, and that Ferguson made it this long as an old-fashioned enemy of swag seems even more astonishing now that he’s stepped down and we’re left to think about just how long 27 years is. During Sunday’s post-match celebrations, Ferguson revealed that Rooney had recently requested a transfer and probably wasn’t in the right state of mind to play. Ferguson spoke with the kind of fatherly condescension admirers and haters have grown used to hearing from the 71-year-old. 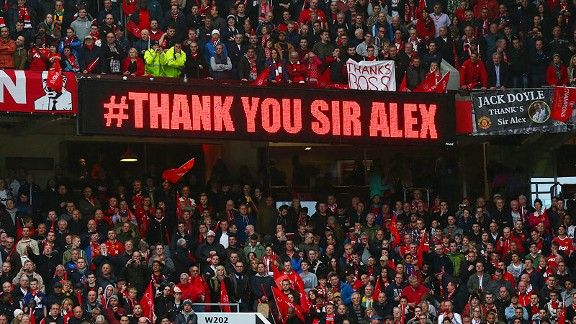 To the end, Ferguson’s treatment of Rooney feels more tempered than the striker’s behavior warrants, even if it’s merely Ferguson at his passive-aggressive, faux-baffled best. He’s certainly not a figure above criticism. There have been many dark moments: the way his hubris backfired during the Rock of Gibraltar affair, his strange feud with the BBC, the way he could turn on favored sons like Roy Keane or Ruud van Nistelrooy upon the arrival of newer sons, his own family’s complicity in the rise of sports agents even as he publicly railed against them. He would bully referees, play peers and the press like puppets, taunt his rivals, and then wonder why they didn’t want to have a glass of wine with him after the match. Ferguson’s own playing career had been a wandering, impatient one, which is ironic given the loyalty and patience he demands from his players.

And yet he remains one of the only sporting figures who invokes in us ideas like faith, trust, and belief, for these ideas transcend the sport’s grim, behind-closed-door machinations. Maybe that’s the thing his departure marks — this sense that someone could actually take charge and accept responsibility for the highs and the lows. The outpouring for Ferguson has as much to do with his accomplishments as with our own nostalgia, misguided or not, for a time when we could trust that our leaders knew what they were doing. Before we had to keep track of the board of directors or publicists or agents, and before we had been let down by the banks or church or Congress. This is a naive simplification, sure. There’s a paradox in how we valorize strong leaders in retrospect. Things are never as good as they say they were, and oftentimes history freeze-frames Great Men as charismatic rather than crazy, brave rather than maniacal, spurred by integrity and vision rather than by petty grudges and perceived slights.

But it’s a mythology that suits Ferguson. He is one of the last figures in sports for whom it is possible to draw that line from a distant, irretrievable past to the present. Maybe he only seems strange and untenable and principled in relation to the professional world he is leaving behind. My friend Pete recently sent me a copy of a Ferguson “case study” prepared by Harvard Business School. It’s hard to imagine a future captain of industry heeding these words: “For a player — and for any human being — there is nothing better than hearing ‘well done.’ Those are the two best words ever invented in sports.” It’s almost funny, for example, to imagine Rooney trying to form some kind of convincing response to his manager’s cunning, Machine Age eloquence.

We narrate the 27-year backdrop to Ferguson’s career as one of innovation, fracture, bizarre juxtapositions: the ancient manager who recalls working as a tradesman during his offseasons forced to deal with millennials, Twitter, and fluorescent shoes.

To recognize change is not to surrender to it. This was perhaps Ferguson’s greatest attribute: his adaptability. It’s difficult not to sound hagiographical when talking about Ferguson’s legacy and his ability to retain his integrity throughout these world-historical phases, especially as a fan and — full disclosure — stakeholder. But what we ponder as he steps down isn’t the trophies or championships. Twenty-seven years only makes sense in retrospect, once it falls into sequence as a history. It never looks that way from within the moment, when every upcoming season could be the beginning or the end of something special, when a cross hanging in the air might make or break an entire city’s spirits forever. Ferguson is a reminder of history, of the broader ebb and flow that contains the moments we cherish and hold on to and watch over and over on YouTube. He is a living reminder of that sense of continuity, the context, the face of the watch. He is a through line from the past to the present. And even if we reject him or his values, he reminds us that we have made that choice.

As he took the field on Sunday to address the crowd, he took a moment to pay tribute to the retiring Scholes and to wish the ailing Darren Fletcher well. He demanded that everyone assembled stand by the club’s new manager, David Moyes. He was a spiritual figure for a secular time, a fabulist in the Theater of Dreams, six feet of flesh and bones who had turned men running around a pitch into an ideology.

“Don’t ever let yourself down,” he told his players, reminding them that their performances could carry the spirits of millions of supporters around the world. “The expectation is always there.”

Whether he was conscious of it or not, he had said much the same thing 27 years ago. There is a clip of his first-ever TV interview as manager at Manchester United, and he looks much the same as he does now — maybe a little less purple and droopy. Privately, he is wondering how he will rescue the club from its players’ lazy, boozy, self-destructive ways. History will have to be their guide. Aberdeen was a great club, he tells the interviewer, but Manchester United is a club that people throughout Britain care about and pray for. “I hope the Manchester United players realize that responsibility,” he says to the interviewer. “If they do, then we have a real good chance.”