Houston, We Have (Lots of) Problems 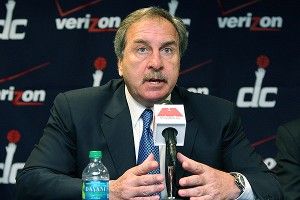 The Washington Wizards are not the worst team in the NBA. That distinction goes to the Charlotte Bobcats, who somehow managed to lose to the Wizards twice this season. But when it comes to dysfunction and the flexibility to rapidly rebuild, nobody beats the Wiz.

The Wizards began what appeared to be a long rebuilding process by firing head coach Flip Saunders. Saunders was originally tasked with trying to get more out of the trio of Gilbert Arenas, Antawn Jamison, and Caron Butler. When all three of those “stars” left town, Saunders shouldered a lot of the blame for not doing a job that no longer existed.

While getting rid of Saunders was a necessity, it was just the first step in a multiple-step process that could lead the Wizards back to playoff contention in the near future. So what is the blueprint for the Wizards to rebuild? They must follow a strategy that combines more front-office personnel changes, building through the draft while simultaneously removing trouble players, and cashing in on the assets they do have.

Ernie Grunfeld has run the Wizards since 2003, and made shrewd moves that assembled the core of Arenas, Jamison, and Butler. Unfortunately, it’s all been downhill from there. While Grunfeld cannot be blamed for the Arenas gun incident, he can certainly be blamed for overrating the quality of his own personnel. And the result of that misevaluation cannot be understated. He committed to huge, cap-crippling contracts for Arenas and Jamison, going “all in” on that Wizards trio.1

Worse than that, however, was Grunfeld’s inability to recognize that the team was not a contender and needed to rebuild around young players. After the Wizards won 19 games in an injury-plagued 2008-09 season, most NBA people realized that the Wizards needed to rebuild. Instead, Grunfeld chose to sacrifice more young assets, choosing to trade the fifth pick in the draft (and other players) to Minnesota for Mike Miller and Randy Foye. Minnesota selected Ricky Rubio with that draft pick. In fact, the Wizards burned so many draft picks that they only have two of their lottery picks on this current roster: John Wall and Jan Vesely.2

Only when the Wizards’ 2009-10 season got off to a disastrous start, followed by the Arenas gun incident, did Grunfeld decide to start the rebuilding process, years too late. In the press conference following Saunders’ firing, Grunfeld commented on the Wizards’ plan, saying that they had to acquire cap space and assets. To Grunfeld’s credit, he has done that well over the last few years, including getting rid of that awful Arenas contract for a less awful Rashard Lewis contract.3 The Wizards have cap space and flexibility.

But the problem is they also have Grunfeld, and his continued employment is causing two huge problems for the Wizards going forward:

1. The Wizards have been so atrocious the last few years, a seemingly attractive free agent destination has become a wasteland. The Wizards have cap space next year,4 yet the big-time players don’t seem to have any interest.5 Surely this is not a reflection on the fan base or the city’s willingness to rally around the Wizards, as a few years of leading the Wizards to the playoffs resulted in a wax statue for Gilbert Arenas at the Madame Tussauds museum in Washington, D.C. This reflects on management and the lack of confidence that superstars in the NBA have in Grunfeld.6

2. How these assets are used will determine the career of John Wall and the fate of Washington basketball for the next several years. Given the disaster over which Grunfeld has presided, can anyone really trust him to build a championship roster around Wall?

Hit on the Draft Pick, Remove the Disgruntled Players, and Cash In on Assets

This is easier said than done, obviously, but the Wizards are poised to have a high draft pick this year,7 and if they hit on that pick, they can add him to a core of young players that includes John Wall, Jan Vesely, and Chris Singleton. Fortunately for the Wizards, this is a very deep draft. Even if they don’t get the top pick and end up picking around the fourth or fifth spot, they will likely have opportunity to select an impact player such as North Carolina’s Harrison Barnes or Ohio State’s Jared Sullinger.

As much as the Wizards need to bring in talent, one of the main things holding them back is the selfish attitude of several players on the team, who seem content to launch shots from wherever they are on the court in attempts to score points at all costs.

The Wizards have decisions to make on several of these players. The players they have under contract are Rashard Lewis, Andray Blatche, John Wall, Jan Vesely, Kevin Seraphin, Chris Singleton, Trevor Booker, and Jordan Crawford. Out of those players, the no-brainers to keep are Wall, Vesely, Seraphin, Singleton, Booker, and Crawford, all young players with good contracts. Out of the free agents the Wizards might lose (and have to make a decision on), the most compelling are JaVale McGee and Nick Young. Other free agents on which the Wizards can make a decision, based on how other events play out, are Maurice Evans, Ronny Turiaf, Roger Mason, and Shelvin Mack. But there are no clear answers as to what to do with Blatche, Young, McGee, and Lewis.

Blatche epitomizes everything that is wrong with the Wizards: talented athleticism coupled with a selfish attitude on offense. The problem with getting rid of Blatche is his contract. He is due over $23 million over the next three years. It is very difficult to imagine anyone giving up anything of real value for Blatche. If they can’t trade him, they should amnesty him, which creates another problem: If Blatche’s salary comes off the cap number, the Wizards will be flirting with the minimum salary line. But that shouldn’t be a major issue if the Wizards are willing to spend money in free agency and/or take on contracts via trade.8

Young is averaging 15 shot attempts per game and a little over one assist. He is also shooting a career low in FG percentage and near a career low in 3-point percentage. He is a free agent, and there is absolutely no reason to bring him back. His mere presence appears to be stunting John Wall’s growth, and if the Wizards want a black hole on their team, they would be wise to get one that is at least moderately efficient.

McGee’s greatest hits include the aforementioned self alley-oop, the most embarrassing triple double in NBA history, and more recently, apparently having no idea what an offensive rebound is.9

Another option for McGee will be to sign an offer sheet with another team, after which the Wizards can match that offer or let McGee walk. If this scenario happens, the magnitude of the contract obviously matters. If you had asked me a few weeks ago, I would have said they should match. But the evidence is piling up against McGee, and there has to be concern that this is just the player he is going to be. The Wizards have a tough decision to make if someone gives McGee a big contract (say, $8-10 million a year for several years), and I don’t know which way they should go. If they end up with a high draft pick and someone like Connecticut’s Andre Drummond is available, it will be time to turn the page. Luckily for the Wizards (and all teams), the draft precedes free agency, so they will have ample opportunity to construct a team before making a decision on McGee.

Remarkably, Lewis’ contract on paper constitutes more than half the committed salary the Wizards have for next year. But his contract is actually a lot friendlier than that. Only roughly $7-8 million10 of that contract is guaranteed for next season. This affords the Wizards four options with Lewis:

1. Pay Lewis the full amount of his contract (guaranteed and unguaranteed portions) and keep him. The only possible logic for this is the minimum salary level. If the Wizards refuse to spend money on other assets, they might need Lewis’ contract to comply with the CBA.

2. Amnesty him (provided they don’t amnesty Blatche). This would require the Wizards to pay the guaranteed portion of his contract anyway. The benefit here is that the guaranteed portion won’t count on their cap. Given the Wizards’ situation, this could actually be a detriment with the minimum salary in play. This only makes sense in the unlikely event that they actually need more than the roughly $30 million in cap space that buying out Lewis will afford them.

3. Buy out the contract. This makes a lot of sense. Save $15-16 million, with the remaining $7-8 million counting against their cap and being paid to Lewis.

4. Trade Rashard Lewis. This represents the Wizards’ best chance to bring in real, tangible help. Unfortunately, this also represents the greatest risk. Why would anyone want to trade for Rashard Lewis? The premise is simple. A team has some bloated contracts they want to get rid of. Since Lewis is due $23 million on paper, that is his number for trade purposes. That means a trade partner can send the Wizards roughly $20-30 million in players for Lewis, then buy out Lewis for the guaranteed portion of his contract ($7-8 million).11 Who are possible trade suitors? It is too early to tell, but every year teams are trying to get rid of contracts, and the Wizards can be opportunistic. The downside is that by definition, this strategy involves absorbing contracts that another team doesn’t want. But the Wizards’ cap situation is friendly enough that this is certainly a viable and worthy strategy to pursue.

One of the fascinating things about this particular franchise is that they are not that far away from being a good team — IF everything breaks properly. They have a young PG with All-Star potential (Wall), two young forwards that they selected in the first round last year (Vesely and Singleton), a sure-to-be-high first-round pick in the upcoming draft, and one of the best trade assets on the market (Lewis’ contract).

A smart general manager, taking proper risks, focusing on the character of new acquisitions, and constructing a roster that mixes their young nucleus with solid, role-playing veterans can turn the franchise around and send it in the right direction. At the very least they can jettison some of the players with attitude problems, replace them with some veterans with character to serve as role models, and help lift the franchise out of the malaise in which it is mired. Saunders’ dismissal was the first step. That move needs to be followed up with the removal of Grunfeld and the hiring of a general manager that can execute a smart player-acquisition strategy. Maybe next year at this time, the Wizards can be making headlines for their positive play on the court, rather than having the national spotlight only shine on them when something embarrassing happens.