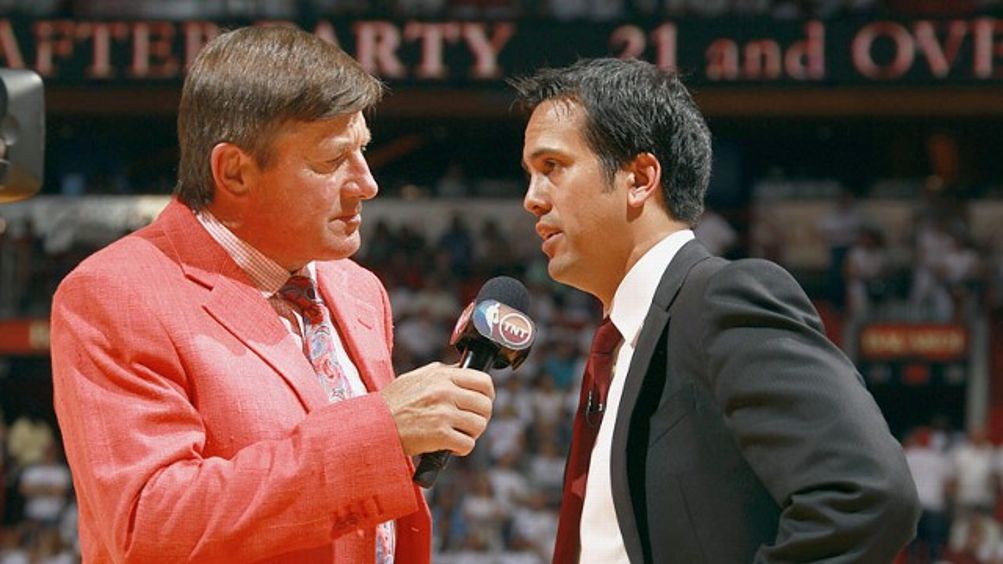 I know what you’re thinking. You’ve seen the photos and the broadcasts and the live moments when guys like Chris Paul and Carmelo Anthony now, and Hakeem Olajuwon and Reggie Miller then, try to stay focused on the questions (which are usually pretty apt) and not crack up.

You’ve been blown off your couch and knocked from your barstool with disbelief — even though you know it’s coming. The structure of an “NBA on TNT” broadcast never really changes, so you always know! Still: Cue the beer spit take and the salsa sliding off the nacho you can’t remember to put into your gaping mouth. Because you can never bring yourself to believe that it’s happening. Again.

Craig Sager is wearing the ugliest clothes you’ve ever seen.

He is! Over and over, you’ve watched him — beheld, really; witnessed — and you’ve thought, there’s no way. It’s impossible. These clothes can’t be condoned, and this man is beyond redemption. Just beyond. Not even Jesus can save him. These suits are crimes against color, coordination, and looking. And you’re so, so right. I don’t know how a confetti cannon works. But Sager often looks like what you’d load into one. He’s pre-detonated scraps of colored paper.

It’s true that prolonged exposure to him might impair your vision. But even more now than he did five years ago, he imparts a kind of joy — in being on TV, in being alive. That’s ultimately what these clothes are. They’re terribly, terribly alive. And Sager is so happy and comfortable in them. The only man who could wear nonsense of this caliber and seem as remotely full of mirth is Payne Stewart, a star who played golf in attire that most other men would wear only as the entertainment for their 5-year-old’s birthday party. But Stewart was always kind of pleased with himself. He was so … put-together. What I love about Sager — what I think we all begrudgingly love — is that this is the only self he has, and it feels utterly, inarguably true. He spent some of March Madness in a marbled suit with the brackets printed on his black necktie. Would anyone else dare? Should they?

Craig Sager is about 60, although his chestnut hair, adolescent demeanor, and trim carriage give him an annoying agelessness. Also: He’s tall. His height has always been his biggest asset as a reporter. He’s been doing NBA sideline work on TNT for years, and the players he corrals don’t have to look too far down to answer his questions. Unlike his peers on the sidelines, Sager seems like the players’ equal. His height works for the clothes, too. There’s a lot of him to dress, and in order for the shirts and suits to work the tailoring has to make sense, so that even when he’s talking to DeJuan Blair in a lavender getup with a pattern that approximates the carpet at La Quinta Inn Wonderland, you notice that the proportions are all right. The suit’s ugly, but god, does it fit.

A friend was saying the other day that he has a hard time looking away when Sager’s on TV. We all do. The clothes are one thing. But there’s something about him in those clothes that compels you to watch. That something, I think, is showmanship. Yes, there’s a circusy-ness about a lot of what he wears, but the important question to ask when you see him standing across from Metta World Peace in a 10-pattern pile-up is, Are the suits ever wearing him? The answer, with rare exceptions, like an ominous, galactic-looking jacket that I call Hale-Bopp, is no. Both the man and the clothes are often in unison.

Rarely do we see Sager near players when they’re out of their uniforms. But there’s a real contrast in their demeanors. The league’s most innovative and experimental styled-up players — the LeBrons and Amar’es — never look truly happy to be in their street clothes, even when the game has gone their way. Maybe they realize they’ve made a fashion mistake or don’t like the new scrutiny that comes with wearing that much tight cashmere. Sager is unembarrassable. He knows what he’s doing, and he’s thrilled to be doing it. The occasional highlight of some of his sideline stuff is that way he coolly shares that thrill with whoever’s to his right and then with us.

Some of his joy might have to do with the amazing leisure of his job. Sager is the father of five children, but he has a sideways avuncularity. This is your jazzy, kind but possibly kinky, occasionally inappropriate, Caesar’s Palace–y, vaguely horse-tracky uncle. During the Beijing Olympics, he told the Washington Post‘s Dan Steinberg that everyone knows he loves blondes. He’s made a habit of studying the NBA’s dancers. His second and current wife, Stacy, danced for the Bulls. Knowing this and seeing the suits clarifies his style. He dresses the way he does because there’s entertainment in these clothes. They want attention and they get it. He happens to carry them off with confidence. But there’s romantic aspiration in them, too. He dresses like a man whose true goal was to meet or marry a Luvabull.