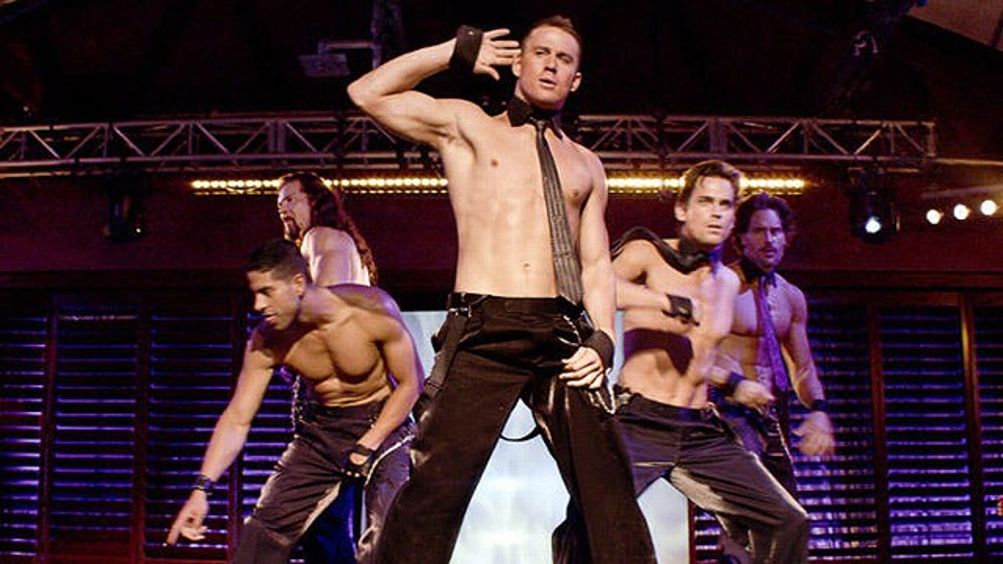 Channing Tatum has trouble with words. Like, speaking them. Saying, uh — saying them out loud. Seems to have trouble actually passing the sharp edges of the sounds through his lips. After seeing Haywire, in which Tatum plays a slow-witted assassin, I remember sitting in a downtown New York hotel room in January, interviewing the film’s director, Steven Soderbergh, who had by that time already cast Tatum in his next two films — Magic Mike, about which much more in a second, and The Bitter Pill, in which Tatum was set to play an ex-con coming home to his prescription-pill-addled wife.

Soderbergh is known for fostering unlikely talent; there is a whole section of his Wikipedia page devoted to the actors and actresses who appear repeatedly in his films — George Clooney, Matt Damon, Catherine Zeta-Jones, Luis Guzmán, etc. — often giving career-best performances. This is the man who, in Out of Sight, made it seem like Jennifer Lopez was the greatest actress in the world. For some reason, he’d decided to jump Tatum into that gang. I guess I wanted to know why.

“I’m just using him. I’m going to use him up, and then I’m going to throw him away. I’m jumping on the bandwagon, and as long as it’s going fast, I’m on, and as soon as it slows down, I’m off,” Soderbergh told me, which is the kind of answer you get when you ask a smart, creative person a sarcastic and evidently skeptical question that they know is beneath them. Then he said this, which I didn’t think much of at the time, but which now feels like it explains a lot: “There aren’t a lot of guys like him right now, that are that age, that are men, that are masculine, but not in a bogus way. And I like him, personally. He’s value-added, as I like to say.”

After watching the film, I think I can report back what Soderbergh was picturing in his head when he said this: Tatum, in a kind of modified b-boy outfit, break-dance stripping to Ginuwine’s “Pony,” backflipping off a strip club stage into a crowd of screaming women. At this moment, a sort of collective, high-pitched yelp could be heard across the theater, loud and presumably involuntary. Cody Horn, Tatum’s love interest in Magic Mike, plays the crowd surrogate onscreen — as the skeptical older sister of Alex Pettyfer’s rookie stripper the Kid, she’s drawn against her will to Tatum’s Magic Mike, which plays out comically in this particular scene, Horn pursing her lips and blinking her eyes open and shut and generally looking like she’s trying to resist this alien force in a backward hat and tear-away sweatpants that is in the process of overwhelming her.

Which is pretty much the story of Tatum’s 2012. Magic Mike is Tatum’s fourth movie this year, after Haywire, The Vow — in which Tatum plays an acoustic-guitar-strumming record producer and the indefatigable lover of a brain-damaged Rachel McAdams — and 21 Jump Street, still probably the best studio comedy of 2012. In all of these films, Tatum offers up a similar type of character: a sweet, dopey bro who mumbles a lot but at heart just wants to be loved, who has so much love to give, who buys two beers instead of just one for himself at the bar but who will totally share his with you as long as you’ll share your life with him. In at least one scene per movie, the director will gleefully shoot him in the nude, and he will cooperate, because he seems like a genuinely nice guy, and a team player, and also a male model, in a past life, so who cares, really?

His Magic Mike is a stripper-entrepreneur with a spent-rocket-shells-and-oblong-glass custom furniture business that he would really like to get off the ground, and an earnest desire to be seen as more than the pop-locking guy in the trench coat and the humiliating tie, making it rain men. It’s Tatum’s fourth winning performance in as many tries this year. He is having, arguably, a better 2012 than anyone. He probably will be our next big movie star. Maybe he already is.

The search for the next male matinee idol has not been going well these past few years. This summer has already seen one high-profile flameout — Taylor Kitsch, I love you, and I promise I will stop mentioning you in these columns soon — and seems poised for a second one, if Jeremy Renner, who was already elbowed back out of a lead role by Tom Cruise in Mission: Impossible — Ghost Protocol and who got stuck with the coveted role of Blankly Staring Zombie in The Avengers, fails with August’s The Bourne Legacy. Ryan Reynolds is currently somewhere off the grid retracing Elizabeth Gilbert’s steps from Eat, Pray, Love. Tobey Maguire, Jake Gyllenhaal, and Orlando Bloom are taking a break from their card game with Topher Grace and Joshua Jackson to shake their heads in sad commiseration.

The reasons for the long leading-man drought of the 21st century are mysterious and evident in equal measure. Preexisting brands have replaced preexisting stars in the shifting cosmology of the big Hollywood studios. An increasing emphasis on foreign box office numbers means you’re often better off with Transformers, who don’t need translators. It’s hard for new actors to break through in movies like Green Lantern, which was doomed to mediocrity long before it was cast, and there are times when it feels like Green Lantern is all Hollywood makes anymore. The fact that audiences go to the movies less than they used to doesn’t help either.

Channing Tatum would seem to be an unlikely savior. As recently as 2006 he was still giving long, unguarded interviews to websites with names like Model Swim, where we learned that he chased rattlesnakes as a child in Mississippi, that his favorite movie is Goonies, that he used to get in the ring and dance battle but now prefers posting up in the corner of the club, where he can just kill it in relative privacy. Still: “I really get inspired by songs. Like, if I hear a thug ‘Want to kill ya’ song, I’m ready to go out and get crazy. Or if you hear this really sexual, sensual slow song, I want to go have sex. I’m very animalistic when it comes to stuff like that. Very basic emotions. I don’t know if I’m very complicated at all. I wish I was. I wish I was one of these deep, intricate people. But I just love having fun really.”

(One more line without context from a recent Details profile: “These days, when he’s not attempting mock suicide, he spends a lot of time sculpting torsos from clay and drawing severe oil-stick sketches on butcher paper.”)

Movies-wise, Tatum began as sort of a prop and has matured into sort of an actor. His first working, non-modeling gig was getting paid $400 to dance in a Ricky Martin video. In 2006, he broke out with Step Up and, on the opposite end of the dance-romance spectrum, A Guide to Recognizing Your Saints. He was in a movie called Fighting. Played soldiers, boxers, gangsters, and G.I. Joe. Nobody knew he was funny until 21 Jump Street, in which he starred as a formerly popular jock who returns to high school as an undercover police officer to find that everything’s changed, hipsters rule the parking lot, and emotional sensitivity is the new schoolyard brutality. His dancer’s grace made for surprisingly good physical comedy; his lunky but kind character’s increasing sense of rage and despair about being misunderstood and treated like a handsome but dimwitted mound of flesh was probably drawn at least in part from life.

Turns out Soderbergh kind of nailed him — “masculine, but not in a bogus way.” Plus he’s likable. The fact that he can barely speak words is a form of charisma. He is a star for these clown times, bro — goofy, halting, relatable. There is a scene in Magic Mike in which the entire merry band of male strippers decamps to a sandbar off the coast of Tampa, where they barbecue and toss footballs and Tatum’s Mike romances Horn. As the two of them are walking around in the sand, in that gorgeous yellow Soderbergh light, they banter, communicating more in grunts and giggles than in actual words, flirting in the way that people actually flirt. Horn reports this was all ad-libbed: “We knew the beats we needed to hit but we didn’t know exactly what we were going to say. We had like 15, 20 minutes and we were figuring it out, standing in the water knee deep,” she said at a recent junket. “Then Steven said he was ready. But we weren’t ready. But the first take, we knocked it out of the park. Steven asked for another so we did it again but every take was completely different dialogue from the one before.”

This is not exactly a surprise. So much of Tatum’s dialogue in Magic Mike — in all his movies this year — is just “um” and “bro” and “y’all.” His signature ad lib: “What? Are you kidding me?!” He talks the way a lot of people talk. And though he is handsome, he does not look like an elf, or a public intellectual, or a short vain man striving for an extra inch of height. He looks like the ex-football player he is. Magic Mike is an exercise in self-satire, right down to the fact that it’s loosely based on his own life story. He is in there with a bare-chested, howling Matthew McConaughey, with Big Dick Ritchie, Tito, and Tarzan. He’s humping a park bench, chanting “Phi! Beta! Kappa!” He is doing a futuristic, Cirque du Soleil–inflected dubstep routine. Soderbergh has clearly never had more fun in his career than he did just shooting Tatum stripping.

Magic Mike is great in the way that most late-period Soderbergh stuff is great — charismatic, fast, funny, and, for a while, as good as anything you’ll see at the movies, before disintegrating in a mostly incoherent third act. (These days Soderbergh makes movies to solve problems, not tell stories — he wants to see Gina Carano run. The script is just an excuse.) It doesn’t really matter, though, because of Tatum, who all of a sudden has the movie star thing going where you want to see him onscreen, his benevolent, bro-hugging presence oddly reassuring, familiar even, his earnest dreams of being taken seriously as a custom furniture maker or lifelong mate or professional actor somehow not all that different from our own.