Jonny Flynn Wants Back In 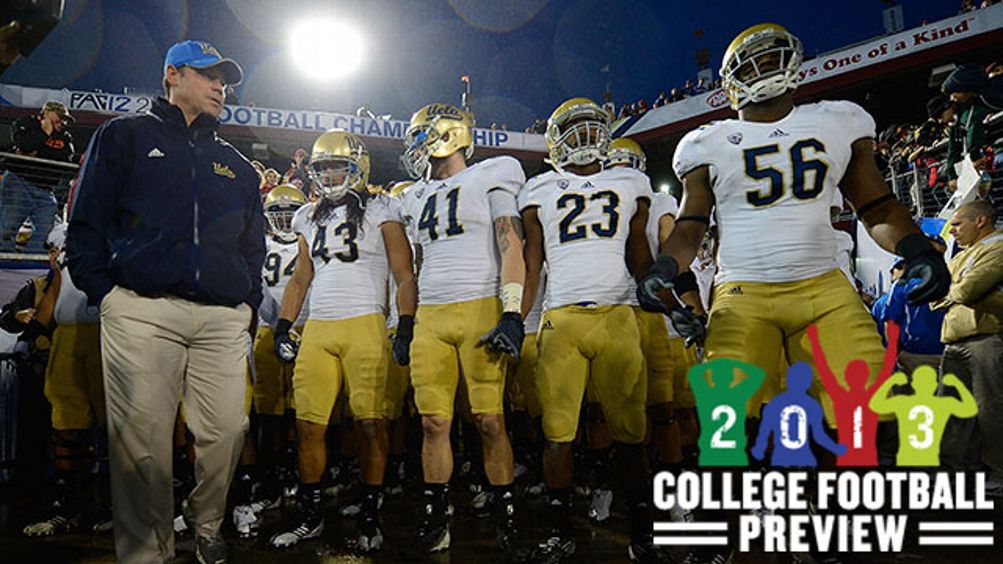 1. The Anemoi in Westwood

“Every day is a blast,” says Jim L. Mora, who’s awfully perky for a guy winding down from several hours of running back and forth under the sun in San Bernardino. UCLA’s football program has set up camp here for the second year in a row, and it’s actually under 100 degrees out, which is surprising to Mora and gratifying to players who expected to spend the day broiling in their helmets. “I didn’t think we’d have a breeze like that. I thought it’d be 105, 107.” It’s a pleasant afternoon, apart from the flames.

“I am worried about these fires,” Mora says, gesturing to the mountains north and west of the Bruins’ borrowed field. The Silver fire is burning less than an hour away, and a new blaze, a small one, has just sprung up within sight of camp. “That one’s brand-new. The winds have to cooperate or we could have some trouble.” There’s no metaphorical segue out of this,1 but it’s good for illustrating that Mora is still laid-back enough, in the nasty stretch of August when every team is still playing embryonic football, to slip into a meteorological monologue.

This is not to say the Bruins are running a carefree operation. Nobody is, at this time of year. “I don’t want to get too high on anything that we’re doing,” Mora says in his post-practice media scrum, “or anybody right now, but there are some real positives. And just like there’s positives, there’s — boy, more than enough things to work on to keep us busy from now until August 31.”

The problem with winning nine games as a first-year coach, beating despised crosstown rivals USC, winning a division title, and falling just a field goal short of Stanford in the Pac-12 championship game is the part where you have to go out in your second year and do all that again, and do it better, all with a roster stacked heavily with kids about as new to playing college football as Mora is to coaching it.

A good beginning is only that, and no more. Cognizant of the elevated expectations a nine-win first season creates for a second-year administration, Mora refuses to rest on his hard-won Trojan rivalry laurels or even acknowledge that he has created any offseason momentum in the wake of 2012’s breakout campaign. “USC is a perennial power. A lot of kids this age grew up watching them dominate. Arizona State is a team that can come into California and pull kids. Cal is always a real tough team for us to recruit against. Arizona is pulling guys out. The University of Washington2 is always coming down here. California’s such a hotbed of talent that the first day we think We beat USC, so now it’s going to be easier to recruit is the first day of our downfall.”

There are course corrections to be made with the existing team, too. Nine wins is dandy, but the campaign ended with three distinct and consecutive tumbles: the pantsing by Stanford in the regular-season finale; a closer, more painful loss to the Cardinal in the Pac-12 championship game; and an utter mauling by Baylor in the Holiday Bowl. “The Baylor one was maybe a wake-up call,” says Mora. “They were just so big, and they were so physical. Obviously, I didn’t do a good enough job of getting us prepared mentally. But what we also saw is we had a long ways to go physically. We’re a totally different-looking team right now than we were when we took the field against Baylor. We’re bigger. We’re stronger. We’re faster. [My players] didn’t like that feeling of getting outmanned. I didn’t like that feeling of getting outcoached. And I love the way these guys have taken that challenge.”

The defensive backfield is a particular concern. We confess to Mora we didn’t recognize anybody back there in the last couple  of drills. He laughs. “Well, neither did I!”

“We’re going to be really thin at certain positions. Or not necessarily thin, but young. We’re so young. We only have 13 seniors on the roster.” You can feel the “but” coming here: “John Wooden always said he’d take talent over experience any day. As long as you’ve got the right guys, and they are talented, and they are committed, and they care, and you can teach them quickly and you ask them to do the right things and don’t try to make them do things they’re not capable of, or overload them, then you have a chance. So I’m banking on that.” Simple as that.

• Correction. Mora miscounts the remaining days in the offseason at one day’s practice, and corrects himself the next: “Contrary to what I said yesterday, it’s actually 23 days from tomorrow until we play. Otherwise we’d be missing that first game. We don’t want to do that.”

• Hail, Dietrich Riley. The rising junior safety, forced by injury concerns into medical retirement earlier this summer, still has a bright future with the Bruins, according to Mora: “He’s gonna be an undergrad student assistant, so he can come out here and coach. I just think it’s important that we offer him that opportunity to see what he wants to do with his life. For him to be out here working, it’s pretty selfless to me, because he had big plans, in terms of what his football career was going to look like. And it didn’t work out the way he wanted it, and rather than mourn, he just said OK. He just accepted it, and said I’m going to go help somebody else.

“It’s what we knew of Dietrich anyway. It’s why he was such a leader, and why we’re gonna miss him on the field as much as we are.”

• Everybody’s good at something. Replacing dynamite K/P Jeff Locke will be no mean feat for the Bruins. “There are statisticians that say you should go for it on every fourth down,” says Mora. “I don’t know if I have the courage for that. Maybe just snap it to Brett [Hundley].” It worked last year.

• This is new. Coaches heaping praise upon their starting quarterbacks, sure. Coaches lavishing their predecessor with compliments, rarer: “[Hundley] is just so frickin’ grounded, it’s amazing. I think Rick [Neuheisel] did a great job with him earlier. I think Noel [Mazzone] and Taylor [Mazzone] have done a great job with him in the last year, but more than anything, I think it’s his family. His parents are great. His sisters are great. And they check him.

“I think probably early [last season] it was more talent than technique with him. And once again I’ll go back to Rick. You know, Rick is an excellent quarterbacks coach. That year that he spent with Rick before I became the head coach, he developed a lot, with a really good mentor who played the position at a high level. It wasn’t like he was some raw kid.”

• Thirty-second hypothetical. In the twilight of your career, they build a statue of you at UCLA. What’s inscribed on the base? “Never happen. I wouldn’t want it. Doesn’t that usually mean you’re dead? We have a statue of John Wooden outside Pauley, and I think that should stand alone.”

Can we say “the stadium”? Like, the entire stadium and its surrounding environs? 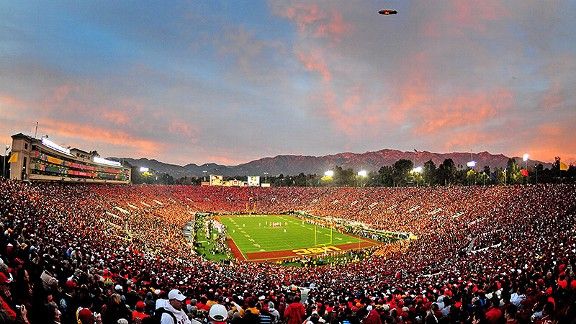 If anybody gets to do that, it’s UCLA. The Big Ten and Pac-12’s smug protectiveness of the Rose Bowl experience is entirely earned, and the Bruins get to spend their regular-season home dates there as well. Sunburns that leave permanent scars on one’s person just feel so much more fancy when tailgating on a golf course. Like all grand ladies, the Rose Bowl is getting some discreet work done in the offseason;3 interested readers can follow along with the renovations over here.

• Required viewing: Appointment television pops up early in the form of the Nebraska home-and-home series. The Bruins recorded 653 yards of total offense in last season’s 36-30 victory. The Bruins visit the Huskers in Week 2, Saturday, September 14.