Simmons and Carolla Dive Deep Into ‘Fast and Furious 6’

Can Johnny Depp’s Career Be Saved? 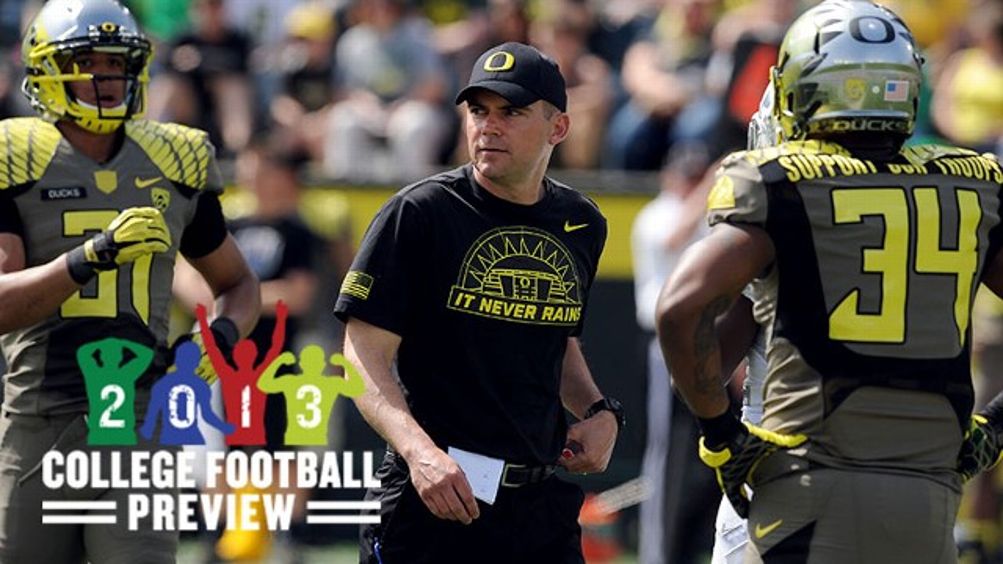 When we catch up with Mark Helfrich, he’s roaming the Oregon football complex, checking in on progress at the program’s formidable new operations center, scheduled to open next month. The new structure is black, shiny, and looks as though it could have been born of some far-flung stargate, rather than of Scrooge McDuck pools of Nike largesse. Blueprints obtained by The Register-Guard last year included plans for two movie theaters, space for video editing, and a museum. It’s the perfect project for college football’s most visible new-money powerhouse program.

And the figure inhabiting the fourth-floor master suite set aside for the Ducks’ head coach will not be the imposing, legendarily prickly Chip Kelly. Instead it will be his unassuming, affable successor, still getting his feet wet in his first ever head coaching gig. 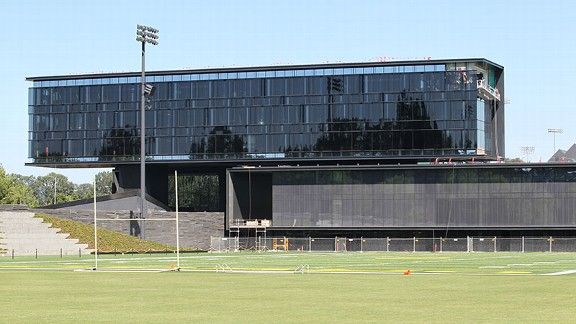 This is how it has worked at Oregon for decades of football coaching changes. The last skipper brought in from outside the program was Rich Brooks, plucked from the ranks of UCLA’s position coaches prior to the 1977 season. When Brooks departed for the NFL, offensive coordinator Mike Bellotti was promoted to the head job. At the time Bellotti vacated his position, his OC was one Chip Kelly. You see where all this is going.

Helfrich’s Oregon credentials are impeccable. Raised not far from Eugene, he accepted his first GA position with the Ducks in 1997, and returned to UO in 2009 following quarterbacks-coaching stints at Boise State and Arizona State and an OC gig with Colorado. On paper and by pattern, he is a faultlessly logical hire.

And he’s going to need every bit of his banked Ducks force to succeed in his first year. Because when you inherit a program at the height of an unprecedented streak of success — the Ducks have either played in a BCS bowl game or for the national title for four consecutive seasons now — you get with it a community that sees Rose Bowl bids as a birthright.

Here’s longtime Ducks defensive coordinator Nick Aliotti, at Oregon’s spring game this April: “All of us are already in a can’t-win situation. I don’t mean this as defeatist, but unless we go 13-0 next year and win the national championship? That’s the only way you can totally improve as a program.”

For the uproarious amounts of pressure he’s under, Helfrich is thrilled to be here, if a bit surprised at how much of his job now involves being asked to weigh in on paint samples. “It’s different, yeah,” he said. “People coming to you for things you never thought of before, whether it’s wall colors or personnel decisions. It takes up a lot of time, and you’ve gotta prioritize.”1

He’s also comfortable cohabiting with the long shadows cast by his predecessors. “This place was built by a lot of people. And Chip is incredible and a good friend of mine, and we hope to build on what he did here. We think we have a pretty special place, and most importantly, we’ve got a bunch of great guys who’re playing really good football right now.”

The spotlight will find these two players most frequently in the season ahead, particularly with the departure of Kenjon Barner, FBS’s fourth-leading rusher, to the Carolina Panthers. Will we see Thomas, who hasn’t been used as a workhorse back, in a more traditional tailback setting in 2013? “We’ll see,” said Helfrich. “I’ve said a bunch of times that you never wanna know the limit on carries your tailback can have, because that means they’re hurt.”

And what of Mariota, the redshirt freshman who finished the season as one of the nation’s top 10 most pass-efficient quarterbacks?3 Helfrich isn’t worried about his physical training, but is interested to see how he develops as a vocal leader of the Ducks. “That’s something that doesn’t come natural to him. It’s what his makeup is. And he got a lot better in the spring, being a more assertive version of himself. He doesn’t have to give a rousing speech and jump on lockers and throw chairs, he just has to be who he is and notch that up a little bit.”

A newer, hopefully better version of the existent self. That’s the Oregon way. And what should we expect from this crop of Ducks, who are not short on scoring weapons but will have to replace so very many tackles? Is the soap bubble of success in Eugene stretched to its limit? What if it’s not? What if the bubble’s made of some space-age Nike Cordura shit with a name that’s just a series of as-yet-undiscovered elements?

This is why we watch, and there’s not a fancy answer: Because Oregon is Oregon, and because it’s been too long since we could say that about a football power that doesn’t have a legacy stretching back to a World War. It is difficult to find a casual football fan who does not like Oregon. The Ducks are fun. It is a matter of scientific record.

Though the identity of Oregon football will undoubtedly evolve with new blood in the top job, the Ducks remain atop the attention economy leaderboard. And we’ll get to watch this new flock decide what that means with precious little resistance: The latest iteration will get halfway through October before facing a team that finished 2012 above .500, and its fiercest adversary will be the Kelly legacy.

This is not to say that’s not a daunting opponent to stare down, however incorporeal. How does Helfrich cope with heading into a season in which any outcome involving fewer than 12 wins will be a mathematical letdown?

“I don’t think about it. We’re focused on the process; we’re not focused on the outcome. And if we control the process, and we do what we can do to our maximum ability, then all that other stuff kinda happens.”

So we’ll see what kinda happens, won’t we?

• He could no sooner choose a favorite star in the heavens. Mark Helfrich will not pick a favorite Oregon football uniform combo, but “According to a bunch of my e-mails, and fans, it better be a green or yellow one, because you’re not supposed to like the ones that aren’t our school colors.”

• He also gets to be surprised by those uniform combos at about the same time you do. Like wall colors, fabric swatches elude Helfrich’s areas of expertise. “We meet with those guys in the offseason and talk about a lot of things, and I don’t think about it until we go out there for kickoff and I look at our guys and go, ‘Oh, OK, that’s cool.'”

• Dad doesn’t have to go 13-0. Helfrich sounds a little grateful that his kids, Max and Maggie, are too young to really take in the change in his job status: “I almost like it that way, that they don’t really know or care. I’m just dad. And I’m good with that.”

• How to make Mark Helfrich cackle. Ask him about the adjustments new position coaches have to make coming in. “Greatest line of spring football was from [new defensive line coach Ron] Aiken, who’s been several places in college and the NFL. We have a unique practice, kind of everything we do, and after the third day he said ‘I’m still waiting for a stretch.’ We don’t ever stop.”

• The truest Oregon thing ever said. Helfrich’s Arizona State quarterbacks were more pass-happy than his Oregon protégés. Will he throw more this season, particularly with such a gifted pure passer in Mariota? In answering, Helfrich gives a reply that ought to be etched in platinum over whatever grand monument the Oregon football program raises next: “We’ll do whatever it takes to score.” No truer words. “We don’t want to be balanced.” (Also no truer words.) “We have a unique talent at quarterback, and we’re certainly going to play to his strengths. But we’re also going to do what we’ve done best. You want to be able to do what you want when you can.” For a new head coach, he’s coming up with program raisons d’être at a frightening clip.

The quickest shortcut to loving Oregon’s mascot is this: The Oregon Duck is the star of the only acceptable “Gangnam Style” amateur dance video in recorded Internet history:

Also, he rides a motorcycle onto the field, and gave us this memorable Fiesta Bowl photo: 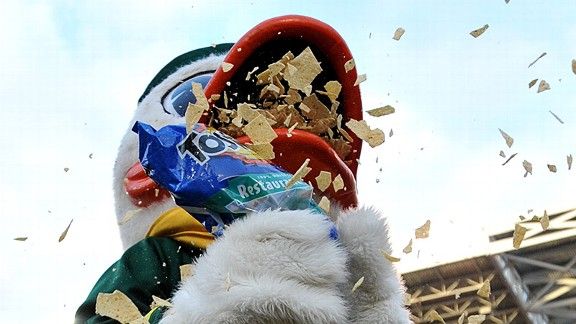 This is the best mascot. No arguments will be accepted.

• Oregon football commences: Saturday, August 31, at home versus Nicholls State. Nicholls State won one game last year as a member of FCS’s Southland Conference, against NAIA’s Evangel University. (Just about every college football team can play apex predator to at least one other team. It’s only fair.) This figures to be 2013’s answer to Oklahoma State vs. Savannah State. Enjoy your oversize check, Colonels.4

• Conference play commences: At home versus Cal on Saturday, September 28.

• Required viewing: At Stanford, Thursday, November 7. The Cardinal dealt the Ducks their only loss of 2012, by a field goal’s margin, in overtime. And the rematch is a weeknight game kicking off at 9 ET? Football God is good.

This article has been updated to correct which floor the Oregon head coach’s master suite is on at the Ducks’ new football building.