The Valley Plays Itself 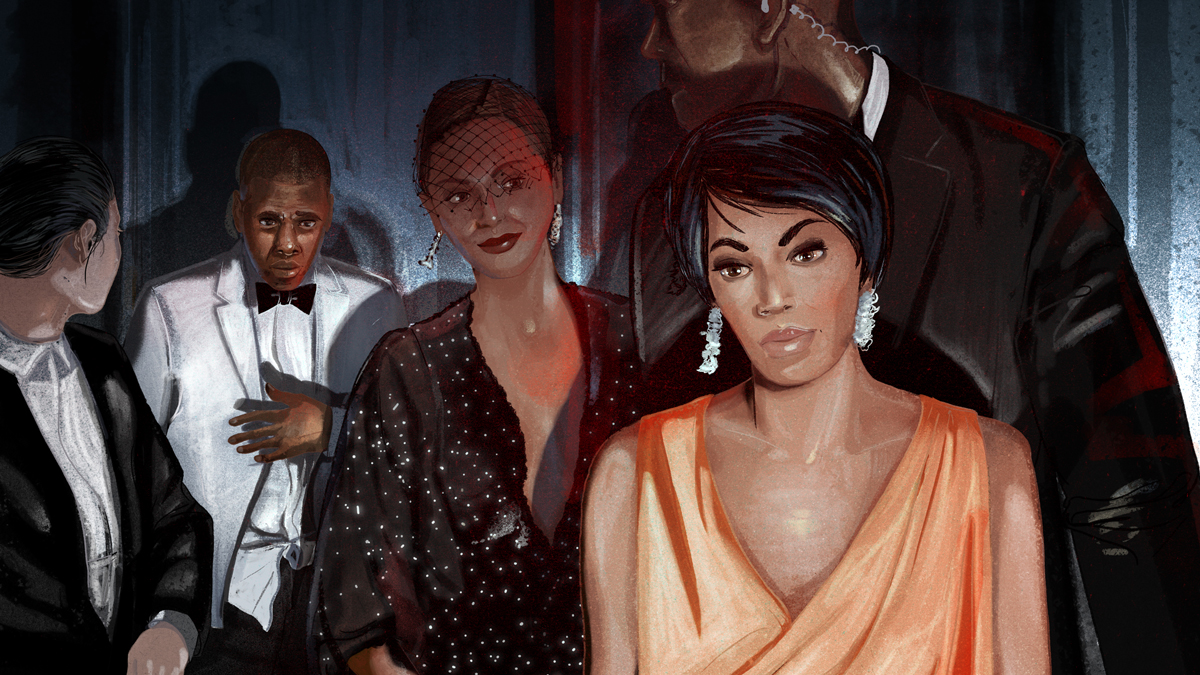 Try not to look at the daughters of House Knowles in this image. I know it’s hard, but do what you can to avert your eyes from the halo. Look at Jay Z instead. Look at his pretty white dinner jacket, his runaway shirttail, the slapped-awake expression on his face. You’re looking at a man who got on an elevator feeling like Sean Connery and got off it knowing he’s actually Roger Moore. Now look at Solange Knowles and her sister, Beyoncé. Look at Solange, wearing a sherbet-colored 3.1 Phillip Lim silk dress and the facial expression of someone who just beat up Jay Z and gives zero fucks how you feel about it. Look at Beyoncé withholding the gift of eye contact entirely, smiling behind that veil as if at a private joke. Is there any question about who’s ready for this close-up and who’s Sinatra with his hairpiece askew? You might as well ask Who run the world, rhetorically. 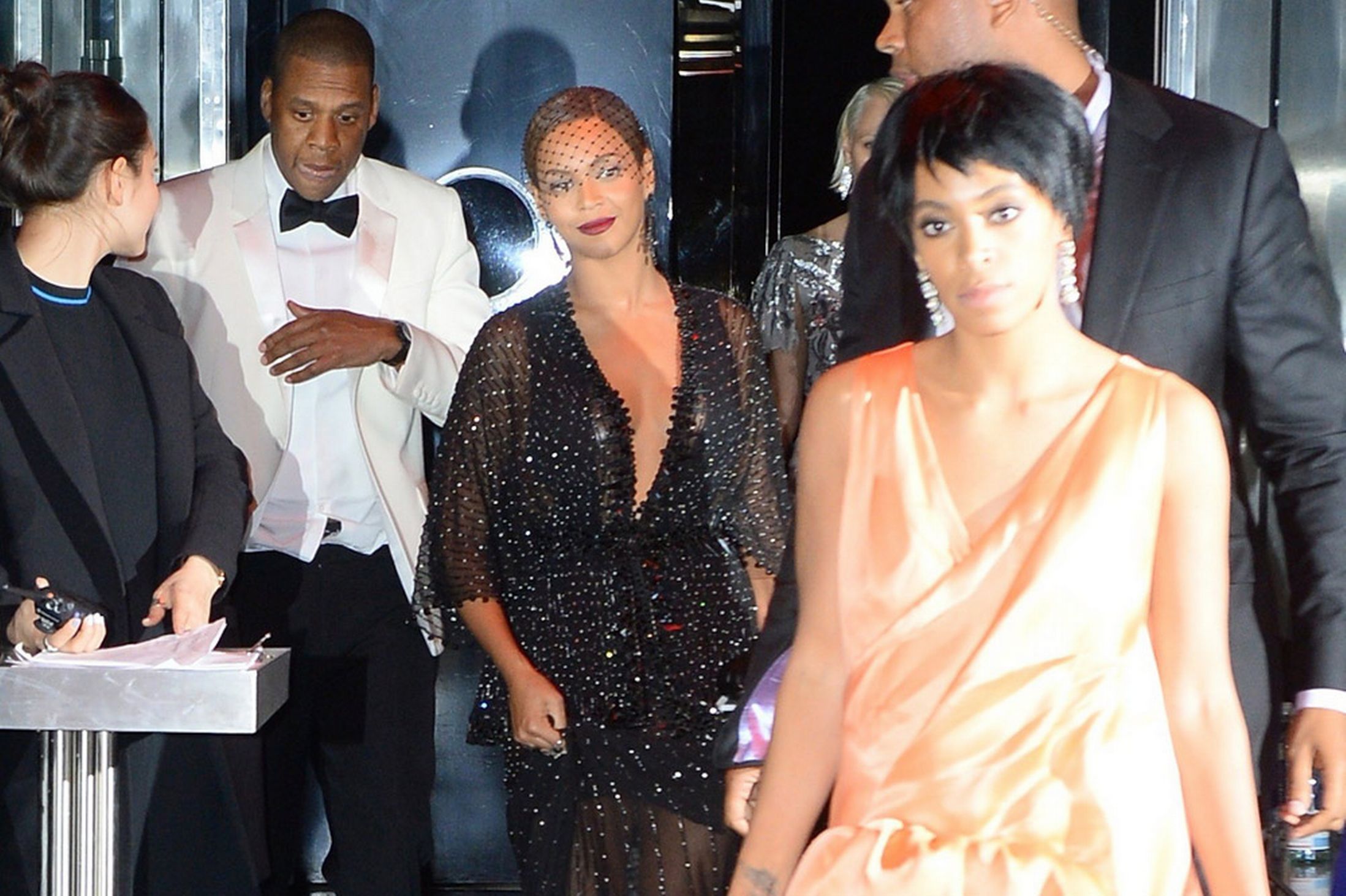 This is one of several photos taken by paparazzi on the night of May 5, shortly after Jay Z, Solange, and Beyoncé left a Costume Institute Gala after-party at New York’s Top of the Standard bar, also known as the Boom Boom Room, and rode an elevator 18 floors to street level. This being the year of the elevator as impartial recording device, as interstitial zone between public and private space, there is also footage — subsequently leaked to TMZ and circulated globally — of what happened during that elevator ride. The video is in grainy black-and-white, sometimes indistinct, a sonogram of a scandal about to be born — look, there’s the foot — but the broad strokes are clear. Solange and Jay Z are in each other’s faces; then Solange starts kicking Jay Z with her gold ankle-strap Stuart Weitzman heels as a towering security guard attempts to restrain her. It happens twice more after that. The Internet will commonly refer to Solange as having “brutally assaulted” Jay Z, which is inflationary language — as close-quarters combat goes, this isn’t The Raid 2. But it’s clearly more than just a tiff. You can tell Solange wants very badly to hit Jay Z, and in the days and weeks after the footage gets out, the story will become about what he said or did to set his sister-in-law off — and why Beyoncé, standing only inches away in the corner of the elevator, never moves.

Which brings us back here, to a picture of some people getting off an elevator. Regardless of what this image portends or doesn’t for the long-term prospects of the Knowles-Carter union, it’s a bull’s-eye visual metaphor for pop circa 2014, a year when women were the only mainstream artists creating narratives worth our attention. Seriously: Name a dude who bestrode the pop world in any even remotely colossus-like way this year. Factor out the dudes from One Direction, since boy bands serve at the pleasure of female consumers and always have — who’s left as this year’s embodiment of what might matronizingly be called “guy power”? Who runs the world? Dave Grohl? Mark Kozelek? Ariel Pink? Rolling Stone’s 2014’s best-albums list, with U2’s AOL Disc and Bruce Springsteen’s Boss-n’-sods collection High Hopes at no. 1 and no. 2, respectively, felt like stats-juking speculative fiction about a parallel galaxy whose polestars weren’t Taylor Swift and Beyoncé. Swift’s 1989 was the only 2014 pop record as utterly undeniable as last year’s Beyoncé, which came out again last month with new bonus tracks alluding to Elevatorgate and cheating husbands — the deluxe reissue as subtweet. Even the best pop-music arguments of the year were about music by women. Who does Nicki Minaj think she is? What did we do to deserve Iggy Azalea? WTF, Lana Del Rey? This story didn’t start in 2014, but its arc has never been clearer — in the content-ocracy modern pop has become, dudes just don’t move the needle like they used to. The conversation we thought we were having all year about feminism in music was actually a conversation about power; every time we asked a female pop star to take a position on the F-word, we were really asking the newly crowned overlords of our national dream life about how they planned to govern. (If the bridal-party portrait from Solange’s staggeringly hip wedding to the director Alan Ferguson in New Orleans in November is any indication, the answer is “benevolent psychic matriarchy.”)

A picture like the post-elevator photo is compelling because we’ve become a nation of truthers, obsessed with counternarrative. We thrill to grainy long-lens images of Brad Pitt and Angelina Jolie on a hotel balcony in Australia smoking cigarettes and having what looks like a barn-burner of a marital fight — if not necessarily the relationship-ending blowout that In Touch chose to spin it as — because they seem to contradict Angelina’s self-presentation as a being of pure light and Brad’s as a person who finds it easy to put up with Angelina’s bullshit. Why is the normcore true-crime podcast Serial so powerfully addictive? It offers the seductive quality of narrative while stoking counternarrative — you get the pleasure of being told a story and the pleasure of going to Reddit afterward to sort through everything that Sarah Koenig didn’t mention.

Beyoncé is the signature pop artist of this distrustful moment in American history because she’s able to tell a story about herself and her relationship that encompasses both narrative and counternarrative. She’s a nexus of ambiguities, like the moon landing or the Kennedy assassination — a hook to hang our doubts on. Her daughter, Blue Ivy, is either a human baby or a sophisticated doll-based false-flag operation orchestrated by the Illuminati. She stores footage of herself in a climate-controlled vault, as if she knows something we don’t about images as commodity. And at every turn she keeps us guessing wrong. She feeds the celebrity-gossip machine lovey-dovey photo ops with Jay and new songs like the self-explanatory “Ring Off.” She neither confirms nor denies; it’s reasonable-doubt time all the time. Her own father, Mathew Knowles, suggested in a radio interview in August that the elevator incident was staged to boost ticket sales for the On the Run stadium shows that she and Jay co-headlined this summer: “The Jedi mind trick fools you a lot of the time.” Whether intentional or not, the rumored crisis and Beyoncé’s Sphinxlike approach to its management turned these concerts into a puzzling, fascinating marital-mystery tour. One minute she was a ride-or-die bitch in a balaclava; the next she was a lyric-tweaking woman scorned. The truth was whatever you wanted it to be.

We should probably have expected nothing less from an artist whose world-domination formula is a precise mix of I-woke-up-like-this approachability and regal remove. Nothing summed up that contradiction quite like August’s “Flawless (Remix),” which somehow managed to address the elevator incident head-on without addressing it at all. “Of course sometimes shit go down when there’s a billion dollars on the elevator,” Beyoncé sang, and then she sang the same thing again, bearing down harder on the words, as if the truth of what happened was obvious, as if we’d never understand.

Filed Under: What we saw, Beyonce, Solange, flawless, on the run tour, Jay Z