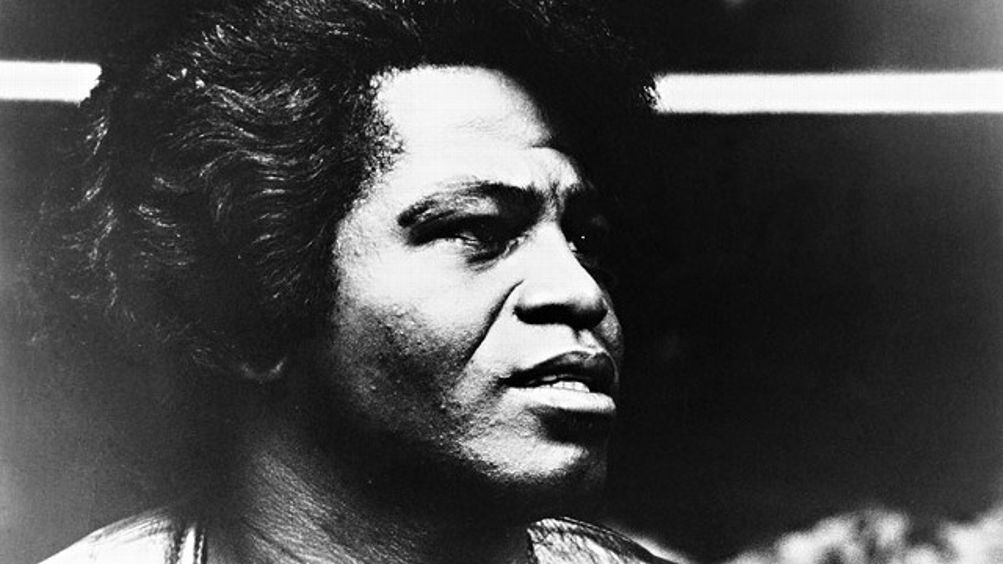 Bobby Byrd met James Brown in a cloud of dust in 1952, while en route to third base during a prison game in Toccoa, Georgia. Brown, then an inmate pitching for the Industrial Training Institute, and Byrd, the only male member of the New Homemakers of Georgia, knocked each other in the dirt laughing. Four presidents later, they made “Sex Machine.” Byrd remembered hearing about James Brown’s basketball heroics back then, despite the latter’s abbreviated stature. (Couldn’t touch the net, but could jump up on a piano after the game and “whoa” the crowd.) Apparently, Brown — then known as “Music Box” — was a peewee blur on the football field as well, making unpredictable changes in direction.1

In RJ Smith’s new James Brown biography, The One: The Life and Music of James Brown (Gotham), funk is described as a condition, making the subject one of its fittest spokesmen.2

James Brown’s most athletic feat may have been fining band members in mid-split while touring 335 days a year. (Miscues were costly when everything — including Brown himself — had to land on “the One,” the upbeat. As with the audience, the band had to give him their undivided attention at all times.) Penalties could be administered with a friendly $5 wave of the hand, or dealt with backstage later, when Brown was taking an intravenous sweat transfusion, or draining the fluid from his bloody knees. (Elastoviscosity is crucial when doing the James Brown every night, whether in Vietnam, Russia, or in the Georgialina boonies.) Keeping up with this guy’s life must’ve been exhausting, between all the burned bridges and infamous all-state car chases. All led by a man with a tight hold on his coiff, who once used his own urine for brake fluid so his band wouldn’t fly off the mountainside.

According to the book’s acknowledgments, the Detroit-born Smith seemed to be Method writing at the mercy of his demanding subject. He took a faith healing in the parking lot of an Outback Steakhouse in Kinston, North Carolina. He went looking for James Brown’s mother in a swampy South Carolina graveyard, reading tombstones by hand in the dark. And, like many whose livelihood depended on the hardest-working hardass in show business, the author lost his job.3

Job stability was not a draw for playing with The J.B.’s, but the idea of absolutely killing it every night must’ve been hard to resist, whether opening for House of Dracula in ’58 or shaming Keith Richards in ’64. While performing “There Was a Time” during a weeklong stand at the Apollo, James Brown had the courtesy to ask the building directly (“Hey, building!”) if it was ready to be demolished. Or in this case, mash-potatoed by a crowd enraptured in the memory of their favorite dances. (Though it’s downright unseemly to pick a fight with the deceased, I will say there are moments when Gene Chandler’s version of “There Was a Time” kind of obliterates the original.)

James Brown backup singer Marva Whitney discovered that the separation of church and funk was a distinction of tapping from the toe or heel, respectively. “Because tapping from the heel moves your ass,” observes RJ Smith. The heel also required a frequent change of socks. One drummer recalls hearing the aquatic “squoosh” of The J.B.s’ footsteps when the band walked offstage every night. A good foot was a sweaty foot. According to the author, “Cold Sweat” was “the first hit song about perspiration.” “Nobody had ever thought to sing about an uncomfortable ferment of the body caused by the nearness of other-flesh.” A press release pinpoints how many freshly laundered shirts James Brown would burn through in a single year, while The One determines the first time he cried, “Give the drummer some.” (May 1967, Cincinnati.) The drummers, all 50 of them, got all kinds of hell, to be sure. But most band members would begrudgingly admit that playing for The Great Santini made them better musicians. On guitarist Jimmy Nolen, Smith says, “If Nolen played half of what he knew, the knowledge might kill you.”4

After the boss drove The J.B.’s to mutiny, replacements were instantly flown in from Cincinnati. Bassist Bootsy Collins found himself going up — as in, straight up — in a Learjet for the first time. “My jaw was over here; afro over there.” A fine storyteller himself, Bootsy discovered that taking acid wasn’t among the myriad of infractions cited by James Brown. (As opposed to faking shoe-shines, playing golf, having fun, a life, etc.) One night, he was summoned to the dressing room for garnishment after his bass had transmogrified into a serpent onstage — a requirement when Bootsy later defected over to George Clinton and Parliament. Disarmed, James Brown could only just sit and watch his bass player roll around on the floor, cackling, and very much off the hook.5

It would be too easy for The One to devolve into reality-TV spectacle, a tall tailspin of watching a celebrity — once considered “the most visible black man in America” — being parted from his wits by his own ego. Smith cares too much to allow this to happen. James Brown’s groupie-juggling while on tour may be described as “an air-traffic control nightmare,” but the band’s accounts of his abuse of singer Tammi Terrell are utterly soul-crushing, as was their seeming inability to stop any of it. The legacy has many sides. Behind every James Brown–inspired party record like “Fever in Your Pants” (by the Suspicious Can Openers), there are three versions of “Don’t Destroy Me” left at home with anguish and betrayal.

The One prevents the collective memory from leaving James Brown at your wedding or in the tabloids. The PCP addiction, the scared mug shots, the stories of him walking into an insurance seminar with a shotgun, asking if someone had used his bathroom without permission, and then driving his pickup down to the rims and dancing for baffled highway patrolmen. The image of James Brown’s dad piloting a riding mower into a pond while telling his son to kiss his ass could be played for laughs were the backstory not fraught with so much pain. Behind the mythos and beneath the cape was a conflicted man at odds with his wounded pride, and a fear of abandonment that often alienated those closest to him.

Lucky for us, RJ Smith devotes an entire chapter to “The Cape Act,” tracing it from the Ostyaks of northwestern Siberia to giving Mick Jagger stage fright in 1964, and ultimately, a kitchen in Augusta, where a swinging door felled James Brown’s poodle (“Poojie”) in 1973. Sobbing at the dog’s lavish funeral, Brown took a knee and was immediately cloaked by his personal valet, Danny Ray.6

I first saw the cape on Saturday Night Live, not James Brown. Eddie Murphy was in his underwear, lampooning at the “James Brown Celebrity Hot Tub Party.” As a kid, I knew James Brown from his role as UFOlogist Lou De Long on Miami Vice, a man in a purple suit who made people hallucinate jars of peanut butter. As if there wasn’t some incarnation of him in nearly every rap song playing at the time. James Brown’s grunt was being programmed into our sampling memory, assumed as part of the beat, harnessing all that supernatural “Other Further” into what poet Jayne Cortez called “the spasm of a syllable.” Apparently, I had gone about this whole James Brown thing backward. I once asked Public Enemy DJ Terminator X about “Rebel Without a Pause,” a PE track that sounded like the sky above, whistling itself straight to hell. A teapot at the edge of panic. He scoffed. “That’s no teapot! That’s James Brown, man!” It came from a J.B.’s instrumental called “The Grunt.” Oddly, “The Grunt” is gruntless. (RJ Smith’s own theories about the grunt — hearkening back to 18th-century hog bones chucked in the Ohio River — unfortunately didn’t make the final draft.)7

In Karl Marlantes’s grueling Vietnam novel, Matterhorn, grunts in a second fire unit carry soul 45s while on patrol. Each Marine is responsible for a different classification. One carries “the hardcore”: Otis Redding and James Brown. Another is in charge of the Motown, while another holds instrumentals like King Curtis and Junior Walker. The squad leader, a black corporal named Jackson, carries a record player on his pack and some Marvin Gaye with his ammo. “A 45 was probably as near to home as anyone could get in the jungle.”

That is, until a transistor radio fell from the sky. During the conflict in Vietnam, jungles and villages were bombed with portable radios that were locked into a single frequency, blaring propaganda. (The U.S. Army experimented with a psy-ops program improbably called the Urban Funk Campaign, deploying a “sound curdler” that would make “Rebel Without a Pause” sound like “Please, Please, Please.”) Back home, as the Nixon administration pushed its dubious “Soul Initiative” to rally African American support, Nixon backer James Brown received letters from black soldiers lamenting the absence of soul music on Armed Forces Radio. An owner of several stations himself (good for airplay), the Godfather rectified the situation by bringing The J.B.’s to Vietnam for a USO tour. “We didn’t do like Bob Hope,” he’d say. “We went back there where the lizards wore guns.” While James Brown did the Cape Act to a backdrop of machine gun patter, Bob Young, future mayor of Augusta, Georgia, was flying a helicopter with the words “Mother Popcorn” scrawled on his helmet. (In the James Brown “popcornography,” mother was an honorific for a large rear end.) According to Smith, the mere act of federal marshall James Palmer keeping drummer Clyde Stubblefield out of the draft and seated in The J.B.’s “counts as one of the great unsung patriotic acts of the era.”

James Brown’s patriotism wasn’t called into question, but his blackness was, especially after performing at Nixon’s inauguration. “Incidental contact with Nixon could suck the pigmentation right out of you,” says Smith. Growing up in poverty in the Jim Crow South, James Brown had pretty serious reasons for being James Brown. As a kid, he’d already sensed a feeling of invincibility after being accidentally electrocuted four minutes straight until his shoes smoked. He would later realize that the moment could be much bigger than James Brown. The night of the Martin Luther King Jr. assassination in April 1968, Brown — who felt nonviolence was weakness — vowed to continue a scheduled concert in Boston, fearing a cancellation would endanger fans. You can also catch him crying sweat while doing the Zombie Walk, and YouTube it to death. As pointed out in The One, Martin Luther King Jr. couldn’t stop a riot, but James Brown actually did — at least in the estimation of the Godfather of Soul.

In 1966, the bill at Tougaloo College would be shared with King, Sammy Davis Jr., and Harry Belafonte. It was a later stop on the “March Against Fear,” just outside Jackson, Mississippi. During a meeting held to determine the order of speakers, the reverend suddenly cut out. “I’m sorry, y’all. James Brown is on. I’m gone.”

Dave Tompkins’s first book, How to Wreck a Nice Beach: The Vocoder From World War II to Hip-Hop, is now out in paperback on StopSmiling/Melville House. Born in North Carolina, he currently lives in Brooklyn.

Previously by Dave Tompkins:
Swarming the Field: Bugs, Nazis, and The Hellstrom Chronicle
Label Conscious: The Ghosts of Def Jam’s Past