The Year in Movies 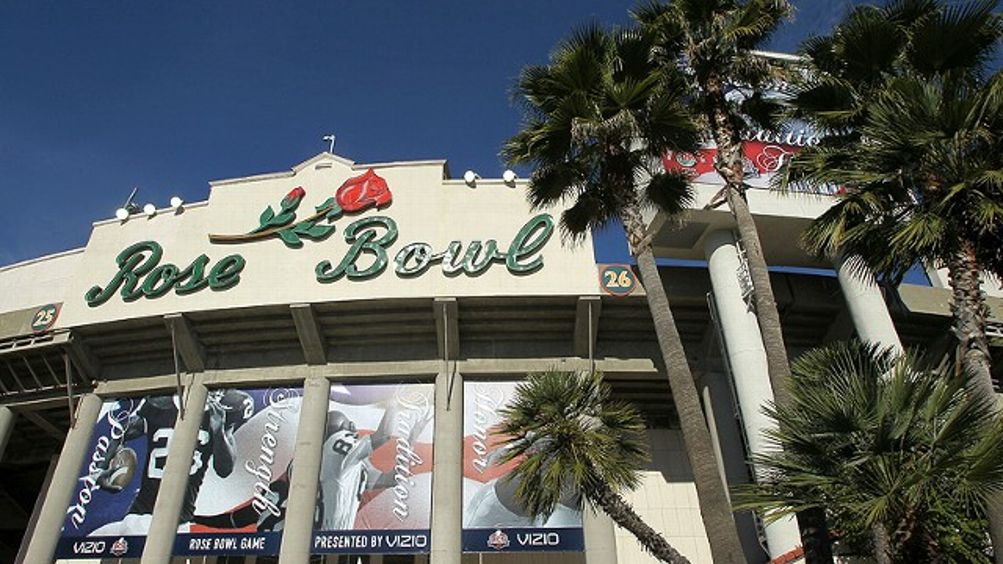 The Position Has Been Filled

University of Tennessee — The Volunteers higher-ups have broken form and made a sober, adult hire. After firing Phillip Fulmer back in 2008, they brought in glitzy, brash Lane Kiffin. The move reeked of desperation, and like generations of desperate Eastern Tennesseans of yore, their hard-earned money went to a snake-oil salesman who eventually fled to pleasanter climes. Then Tennessee gave Derek Dooley a shot, based, it seemed, on the fact that his father, Vince Dooley, is an SEC legend. Dooley the Younger recruited poorly, wore terrible pants, and now, like his hair, he and Tennessee are neatly parted. Finally, and to their credit — granted, said credit is being delivered as backhandedly as possible — Big Orange has returned to the common-sense practice of selecting coaches who have been successful in their previous gigs, of choosing coaches who have been winning football games. The man they chose is Butch Jones, who went 11-2 in his final year at Central Michigan before being promoted to Cincinnati, where the last two seasons he went 10-3 and 9-3. Now he’s being promoted again, to the SEC. The rationality of this career progression speaks for itself.

There could be some illusive logic behind hiring Kiffin, who was 5-15 at his previous job (the Oakland Raiders) and who left that franchise in shambles, and then succumbing to shock when that same fellow leaves your own program embarrassed and reeling. Kiffin went 4-4 in conference while with the Vols, which at the time seemed disappointing. But then Tennessee hired a guy who was coming off a three-year stint at Louisiana Tech with a record of 17-20. Well, in three years at Tennessee, Dooley went 15-21. Mighty similar, 17-20 and 15-21. Kiffin did poorly with Oakland and OK with Tennessee and now he’s underperforming with USC. Go figure.

Kentucky — It’s always a tough call for an up-and-coming coach, whether to take a head job at a place where he can’t win, like Kentucky, or bide his time and hope a better job comes along. Mark Stoops, at 45, is perhaps impatient. He’s got a whole brood of high-achieving brothers to compete with, first and foremost older brother Bob. I guess the initial non-pie-in-the-sky goal in Lexington will be to go .500 in conference. Over the past three seasons, the Wildcats have won four SEC games. At this piont, Kentucky can’t even expect a conference win against Vanderbilt, which is getting better by the day and recruiting hotly. This road into bluegrass country is a dead end, but with the courtesy one affords an opponent who bears no threat, we wish Stoops well. His move from Tallahassee (where he was Florida State’s defensive coordinator) to Lexington represents a staggering forfeiture of talent. He’s going from the most loaded squad in the ACC to perhaps the worst equipped in the SEC.

Western Kentucky — Bobby Petrino is hoping for a short stay in Bowling Green, a single season being the ideal. With coaches as with players, talent excuses much. One scandal-free year with the Hilltoppers, then one year as offensive coordinator in a major conference. By then, Jessica Dorrell will be ancient history and the top-flight head coaching offers will materialize. Piece of advice for you, Bobby: When it comes time to hire a new student-athlete development coordinator, disqualify any candidate you might enjoy viewing in a swimsuit. You want someone portly and hairy and male. Think of Dom DeLuise. Dom DeLuise with vagrant-level hygiene.

Arkansas — It’s safer to fall in line with Alabama and LSU — power running and play action and stingy defense — than to hope that, like Texas A&M, you stumble onto transcendent individual quarterback talent. This hire seems good for everyone. Bret Bielema gets a $500,000 raise, but more importantly he gets a chance to compete at the highest level of college football. Arkansas gets a proven winner and recoups some integrity just in time to make a play for loose recruits. In Bielema’s favor: Coming off a 4-8 season, a .500 season will be considered progress.

Auburn — The hiring of Gus Malzahn puts Kiehl Frazier back in the mix at quarterback. Along with youngster Jonathan Wallace, Malzahn will have good talent behind center, which has proven especially crucial for hybrid and spread offenses in the SEC. Malzahn’s system, like Urban Meyer’s and Kevin Sumlin’s, puts much pressure on the signal-caller. They either become stars, like Tebow and Newton and Manziel, or the offense looks like a misguided gimmick. Arkansas seems to be going copycat with its hire of Bielema, moving in a smashmouth direction, while Auburn, after languishing in Scott Loeffler’s pro-style attack last year, is going back to what won them a national championship (aside from Cam Newton, that is).

Other — Wisconsin is hiring Gary Andersen away from Utah State. Tommy Tuberville has left Texas Tech for Cincinnati, opening the door in Lubbock for favorite son Kliff Kingsbury, who left his offensive coordinator post at Texas A&M. Sonny Dykes left Louisiana Tech for Berkeley, opening a spot in Ruston for Skip Holtz, who’d recently been fired by South Florida. Bryan Harsin left his post as an assistant at Texas to take the head job at Arkansas State, which is becoming a head coach farm system for the SEC West. The last two Red Wolves coaches were Hugh Freeze and Gus Malzahn. Both spent one season in Jonesboro, which is about the maximum number of seasons a person wishes to live in Jonesboro.

College football boasts the finest regular season of any American sport. There’s no credible disputation of this. But along with our boasting, let us admit our shortcomings. To describe college football’s postseason as lacking is to be generous. It’s more accurate to say college football lacks a postseason. There’s a meaningful postseason for two teams, and soon that number will increase to four. For the remainder of its teams, what college football offers as a reward for having a successful season — or for having a large fan base that appreciates road trips — is some extra practice time and some holiday travel and a scrimmage (also known as a “bowl game”) whose stats count on the permanent ledger.

The prudent course of action for fans is to watch as many of these scrimmages as scheduling allows, regardless of the quality of the action, because soon college football will go dormant. And some of these games will surprise with their competitiveness. Some of these games will have good finishes. Your team might be playing in a bowl, and watching your own team play can’t be wholly uninteresting. But most bowl games are more something to endure than to relish. Of course, there are the folks who like to pretend that upsets of disappointed-to-be-there power programs by fired-up small conference squads mean something. There are the dutiful announcers who, after any noteworthy collision or celebration, are obliged to indignantly and rhetorically ask, “And you want to tell me this game isn’t meaningful?” As if the national-interest viability of a sporting contest should be measured by the investment of the people actually participating in the contest. I have a rhetorical question: If my neighbor and I square off in a fiercely contested badminton game, at the end of which we fling our dainty rackets in the bushes and don’t speak for weeks, should that badminton game be televised? Should others care about it? Sure, it’s nice when football teams try hard. But no, a good effort does not make a useless matchup with nothing at stake suddenly compelling.

So what I’ve done is break the non–national championship bowls into three categories. The first category contains matchups too boring even to poke fun at. You’ll know which ones they are because they’re not mentioned here. The second category includes business transactions during which we hope no one gets injured. The third features games that fail in some way to be utterly unappealing.

Georgia Tech looked outmanned and outdated this season. Among the Yellow Jackets losses were sound whippings at the hands of BYU and Middle Tennessee State. USC’s season is beyond the point of upbeat endings. The only significant wins left for the Trojans will be on the recruiting trail, where they continue to dominate (no. 1 class arriving in 2013, according to Rivals). Next year they’ll have the talent to win the Pac-12, but all will depend on Max Wittek. Worth watching: Southern Cal freshman defensive lineman Leonard Williams. Beastly. Just beastly.

Georgia came up a few yards short in the SEC Championship Game. They fought valiantly and should be proud, but the missed opportunity at a national championship will taste bitter for quite some time. I guess that’s the purpose of this game for Georgia fans — a palate cleanser. Beating Nebraska will mean little. Losing to them will mean less. Bulldogs defenders likely playing in their final college game: Cornelius Washington, John Jenkins, Jarvis Jones, Mike Gilliard, Sanders Commings, Branden Smith, Shawn Williams, Bacarri Rambo, Christian Robinson. Kwame Geathers is mulling a jump to the NFL. Possibly Alec Ogletree.

As a parallel, Nebraska also lost its conference title game. But instead of scouring away the tang of coming up a few yards short, like Georgia, the Cornhuskers will be trying to forget getting stomped into sour oblivion by Wisconsin.

Both squads came into the year with sky’s-the-limit expectations. Michigan’s delusions of grandeur evaporated immediately upon commencement of their season when they were crushed by Alabama, while South Carolina’s downfall came during back-to-back road SEC games in Baton Rouge and Gainesville. This game almost made the category below simply because of Spurrier’s presence. It would be fascinating to watch him cook an omelet, or call the natural gas company and sit on hold.

This is a fun matchup for the Huskies, but not for anyone else.

The extra practices afforded these squads are much more significant than the game, and the big holiday gift for Louisville fans has already been unwrapped — head coach Charlie Strong is staying on. This game is a chance for Florida to work on its anemic passing attack in a risk-free setting, and a chance for Louisville’s quarterback sensation, Teddy Bridgewater, to measure himself against high-caliber though possibly emotionally absent talent.

I know, this is supposed to be the really good one. But as the kids say, I’m not feelin’ it. This is the classic bowl-game problem. If Kansas State were to beat Oregon in a consequential game, it would be impressive. But in this game, not so much. If Oregon beats Kansas State, no one will be at all surprised. Neither result will matter. This is decent watching because it’s Collin Klein’s final game, but that’s about it. Don’t get hurt, Marcus. Don’t get hurt, De’Anthony.

If Not Tilts, They’ll Do Till the Tilt Gets Here

Texas has become a rubbernecker’s dream. The persistent underachievement. The instability at quarterback. The Longhorn Network. Now offensive coach Bryan Harsin is moving on. This game has meaning for Texas because losing it would mean finishing the season on a three-game skid. It has meaning because Longhorn Nation wants to see that, with a month to prepare, Mack Brown and his staff have improved. This is a team that could use some positive vibes around the facility. Oregon State is just the type of tough, well-coached side that will expose weaknesses. Game-plan weakness. Character weaknesses. I don’t think anyone knows quite what the trouble is in Austin, but if things still appear dysfunctional after this game, it’ll be a long offseason.

The continued development of quarterback Zach Mettenberger will raise the hopes of LSU fans for next year, at least until all the juniors on defense declare for the NFL draft. Clemson is always fun on offense.

This is the only bowl game, aside from the tangibly meaningful one played on January 7, that always has an air of worthiness. It’s the best bowl game in every non-football sense. The parade. The spectacular scenery. Tradition in action. As for this particular Rose Bowl, we get to see Barry Alvarez return to coaching.